Thursday morning dawned beautiful. Out of bed before seven to blue skies, crisp air and bright sunshine. Central New York, aka Upstate, at its best. 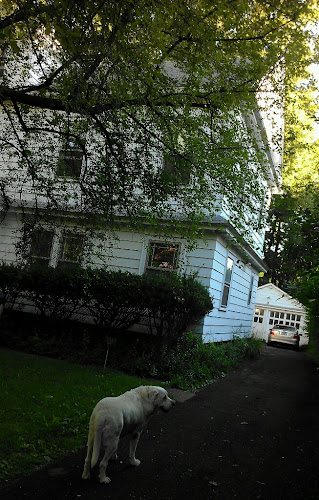 Steve and Stacey live in an astonishing neighborhood, a wild mixture of home styles, mansions under vast spreading trees... 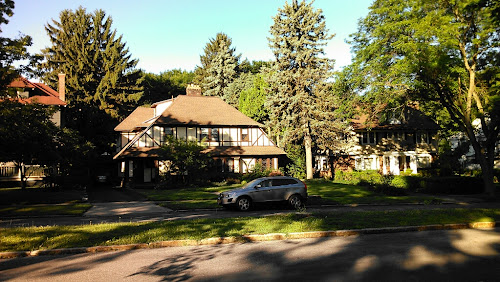 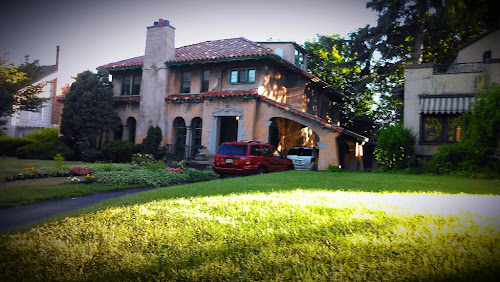 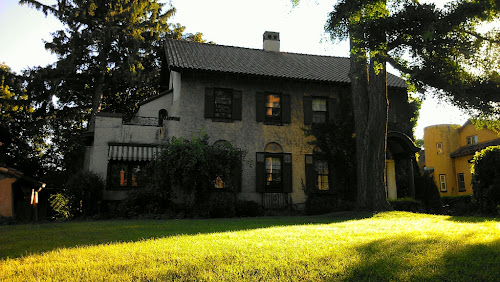 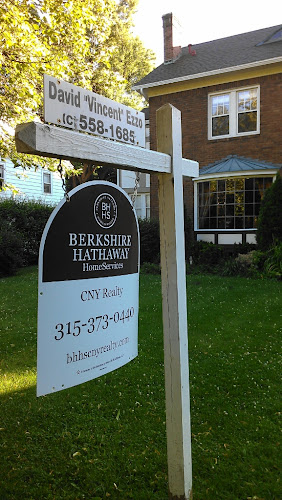 And I never have seen Berkshire Hathaway as a store front name so that's a first. Stacey made us some French toast as a goodbye meal and that was a great start to the day which promised a tough driving day ahead. New York City was on the horizon. And on the way we saw texting stops. Huh? We also saw signs advising that you lose your drivers license after three texting violations. Better take this stuff seriously I guess. Lucky I don't text and drive. 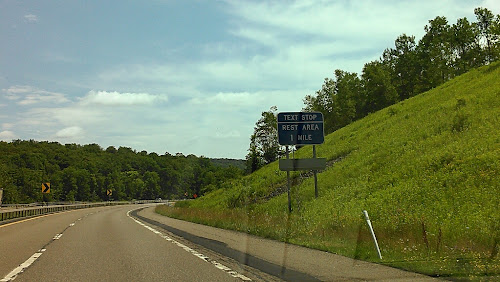 Oh and they gave more gas choices than normal, at prices higher than normal. I guess mid grade is plus and extra is super. Price and pump don't agree on the names! 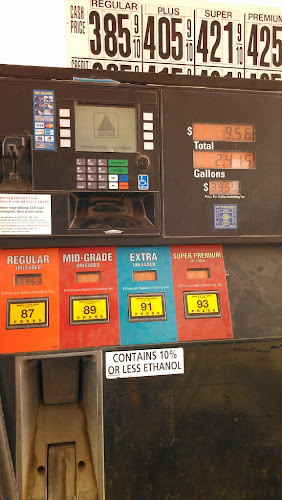 And this doofus parked his Range Rover cross wise so the ambulance couldn't get to the diesel pump. New York living down to its reputation, which was making he anxious about approaching the city. Michael in Brooklyn better worth this! 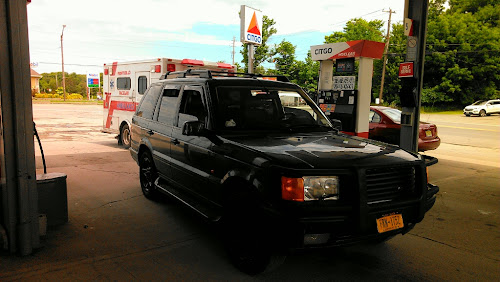 This sign indicates the one way shute to hell. I was thinking Secaucus might be a decent destination, suddenly. 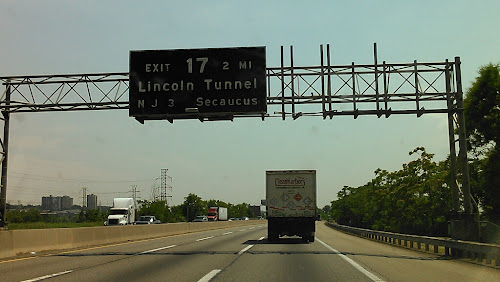 The toll for this sodding tunnel to New York was thirteen bucks. Once the toll takers stopped chatting in the roadway. Must have been important gossip to risk getting run over...the second tunnel to Brooklyn was seven and a half dollars, as an aside. Every time I cross the seven mile bridge for free from now on I will think of this and be grateful. 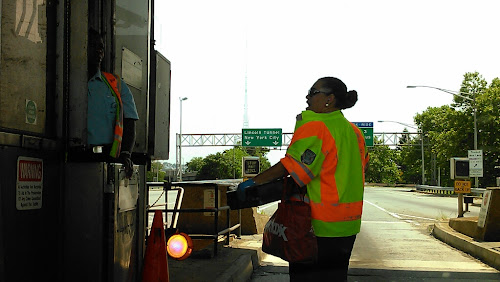 Oh, and you're subject to search for using this delight?! 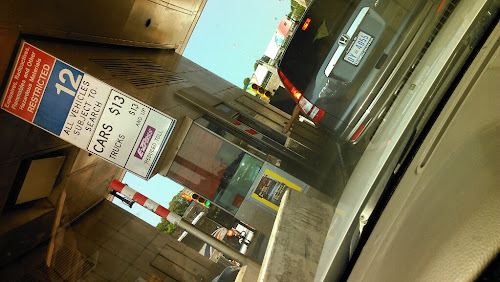 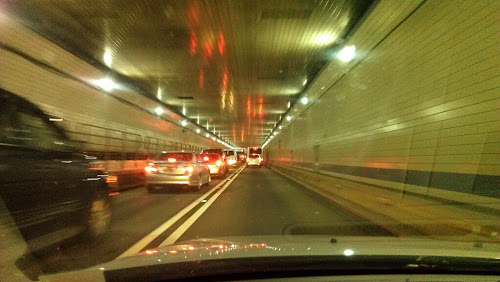 Lo and behold: Manhattan. We passed the twin towers monument under construction. It went by in a flash of orange cones and we were diving into the second tunnel. What a crazy place. 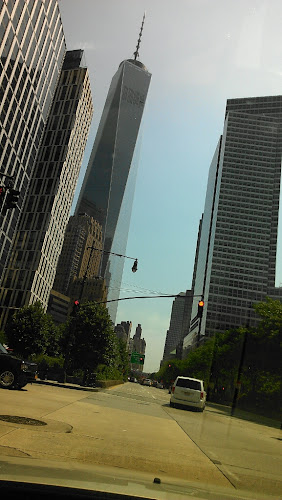 And then we came out under a rusty old bridge. In Florida the state gets annoyed when they see rust. Around here they drive their cars on top of and underneath the rust. My wife was following her phone and barking directions. Cheyenne was snoring. All I had to do was drive. I think I got honked at once (honking was going on everywhere like a a Third World capital) and some local dude felt bad for me and let me in. The honking went on anyway but I was in a state of transcendental meditation. It was all going to be okay. 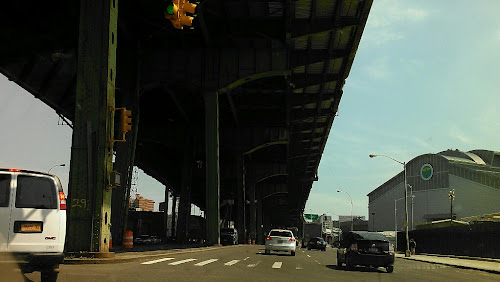 It worked. We found the hotel, thanks to my wife's GPS skills, the clerk was a regular nice guy, we got the last empty FREE hotel parking spot and when our room air conditioner died we got a new room and Alex humped our fridge downstairs for us. La Quinta is cool. 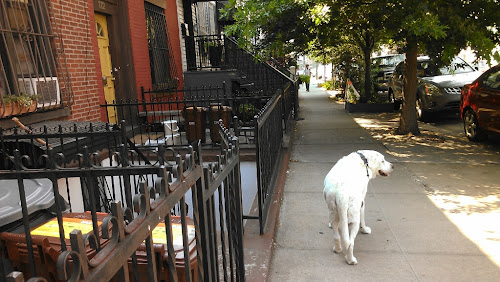 Cheyenne took charge of Brooklyn and walked her little legs off. She loved the sidewalk smells and bustled around like she was at home. New Yorkers called out from their front steps but she ignored them and their dogs. She had places to go. It was 89 degrees and hot... 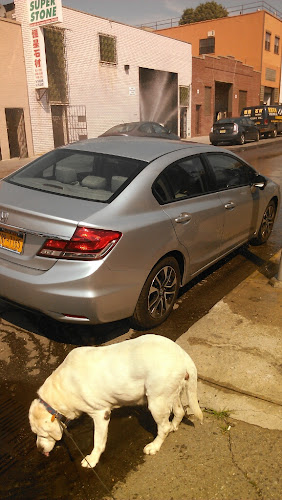 ...so a stereotypical broken hydrant had one guy rinsing his car and Cheyenne got a drink of fresh cool water. She had New York down like a native. Oh and when we got back to the room there was our car, the one with the sunroof, in its own FREE parking spot. Cool huh? The lady in the red Altima looking for a spot thought so. 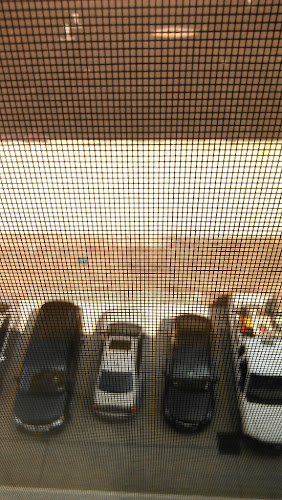 Late at night the place looked as dusty and scrubby as ever. Cheyenne liked it. 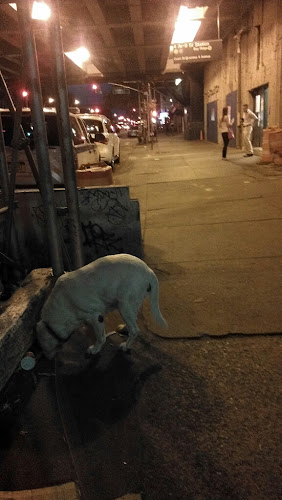 As soon as Layne finishes her business we are out of here. Maybe one day we'll be back for the theater and museums and all that. One day.