It may be that these kinds of display cases are to be seen all over the country offering freshly (really?) cooked food for...dogs. I mean really. What. The. Fuck? When they arrive here, south of reality I am forced to wonder whatever can they come up with next that will drive me off the deep end. I keep thinking I am inured to the madness of consumerism but today I popped into Winn Dixie on Big Pine to pick up a packet of milk safely packaged in food grade tetra packaging pasteurized for my safety (and convenience) and only almost four bucks for the organic model, when I stumbled across this embarrassment to the entire human race and our ostensible purpose in life, said to be reproduction. 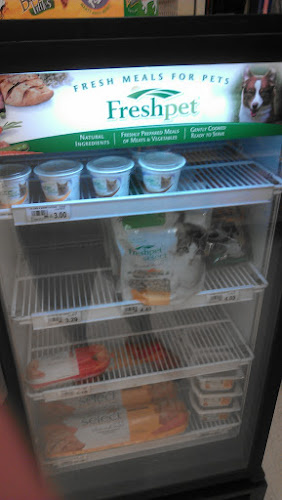 Let's think about this for a minute and ponder the madness. We Americans spend billions on our companion animals and buying enslaved puppies from puppy mills is huge business so middle class well nourished people can the purchase the exact right dog with the exact right pedigree to display their discernment and good taste and wealth. Then we spend billions more spoiling them. Meanwhile we support growing food for fuel, buying third world farmland to grow our favorite foods while the former land owners who are actual human beings (albeit dark skinned foreigners) starve and usually this sort of madness is easy to mask by ignoring the whole mess and watching TV. I "save" a dog from the pound, I feed her mass produced dog food made from god-knows-what and walk the shit out of her to help work off my own share of mass produced food grade rubbish that has settled on my middle class midriff. Seeing this display case just reminds me how crazy this whole wide world really is. Thank you so much Winn Dixie for making it impossible for me to avoid seeing once again with a fresh perspective how utterly inexplicable life really is. What a fantastic mystery ride is this existence. Freshly prepared dog food. Had someone suggested that to me as a business plan I'd have choked on my processed packaged human food lunch and laughed them out of the house. Once again proving beyond a shadow of a doubt I know nothing about anything.

Posted with Blogsy
Posted by Conchscooter at 6:00 PM 2 comments:

The gargantuan Death struggle underway between Jack Riepe and the wreckage of Hurricane Sandy on the New Jersey coast continues. His pork chops have defrosted and gone off but he has caught two very lost wild Key West chickens that wandered into his house and are now headed for the pot. The only other injury reported is a falling toilet seat that hit Jack on the back of the neck as he was refreshing himself with a drink of running water. This photo is to cheer the lost scribe of Tom's River.

Keep ordering his new book Conversations with a Motorcycle from his Twisted Roads Website to keep him fighting the good fight. It's a great read especially if you are without electricity and reading by candlelight. No chocolate cupcakes have arrived yet to relieve the tedium of plucking chickens but reportedly his bosom buddy in Vancouver Canada where the Economic Depression has yet to strike, has a care package on the way. Contact Wet Coast Scootin' for ideas of what to send to help Jack.

Posted with Blogsy
Posted by Conchscooter at 4:14 PM 2 comments:

This is the time of year that a person's thoughts turn to Key West, especially if they live Up North. The leaves are turning in the mountains of Appalachia and the yellows and reds that look so spectacular will soon fall away and be replaced by brown spiky branches and trunks and wind will blow the remains of the leaves away and cold and snow will replace the memories of summer. Love those change of seasons. But if you don't, and I don't, Key West is the place to be. This picture of Key West Bight between Turtle Kraals and the Half Shell Raw Bar could be taken any month of the year. It rains a bit more in summer and sometimes it gets cold enough in winter to require a sweater, but things don't change that much around here.

Florida is known as Flatistan to motorcycle riders, the place where roads vary almost not at all in elevation or in turns, where views are limited by the lack of that third dimension, where water not land is the attraction. Florida isn't known as the fountain of youth, even though young people do live here according to rumors I have heard. Florida is God's waiting room, the place people come to retire and die far from family friends and the lives they knew Up North. Florida is the land of the con, the quick buck, swamps sold as homesteads, the refuge of two bit South American dictators and their henchmen, a place to retire in the sun. And then there are the Fabulous Florida Keys.

Young people do come to Key West, even though there is no institute of upper learning outside of the community college. They come to live the Bohemian 21st century life, to work a job not a career, to be eccentric or artistic or to drop out for a while. They give Key West the feel of a town not of Florida. There are youthful cities in the Sunshine State but Gainesville or Deland have universities that give them the feel of centers of learning just like any other across the nation. But Key West is a different kind of small town at the end of the road, filled with high prices, low paid jobs and in every respect ends up a career dead end for most settlers. In a town of 23,000 there are plenty of people already here already working the best jobs. In a declining economy the musical chairs have stopped rotating.

I wonder why we live here in these islands. Deprived of all that makes the American dream a possibility- a job, a mall, chain shopping and a variety of outdoor excitements, yet we don't move away or seek out cheap dirt on which to make a home and build a career. Can it just be because the weather is so pleasant this time of year? Surely we seek more than just a mild winter climate? I like riding my motorcycle year round but that's not a reason to live in the Keys. Check this idiot out, idling across my single lane street blocking the roadway while he waits for whatever it is to release him to ride ... I sat in my car waiting, with my impateint dog on the back seat, both of us for him to figure out he was being a dick - but hey! This is Florida and no one's mother raised them to have good manners... And that is an issue in a state where people come and go on a whim. Why be considerate when they may not be your neighbors in a few weeks or months? Blocking the street mindlessly is not  a  big deal really. Especially when your neighbor is a stranger.

The Florida Keys enjoy a reputation for eccentricity and apartness which sounds awesome and special. But that is mitigated by the painfully conventional approach to life in the other 67 counties in Florida. My wife went on a course a few years ago and ended up in an auditorium with hundreds of people and of them all only two were wearing bright colored Hawaiian style shirts, everyone else had on severe business attire. "You must be the two from Key West," the trainer announced. That's how Key West works it's magic on you. You live here and you are allowed to be odd. Consider this, on Trip Advisor I am told the restaurant pictured below called Garbo's is the number one best eatery in Key West. Really? Well okay then. I guess one could argue a case of wild ballot stuffing on Trip Advisor or possibly a stationary food truck could be considered the ne plus ultra of places to eat out in this peculiar town. You choose.

When friends in California heard I was moving to Florida their first reaction was why would I leave the Golden State and secondly what about the humidity and the insects? I countered that I was saying goodbye to fog, cold, earthquakes and traffic jams. Besides, I wasn't moving to Florida, I had gone sailing and had washed up accidentally in Key West. Big difference. I don't live in a land of strip malls and early bird specials but I do collect coconuts from my yard and my winter wardrobe consists of a sweat shirt and two light cardigans. With a sleeveless vest for inbetween days not quite considered cold. And there we are, weather matters, even though my teeth were chattering last night on the ride home in 65 degrees at 6am. It matters to me at any rate and in th weeks to come this page will be filled with pictures of greenery and sunshine and the same old shit. When the view outside your window is gray and snowy and cold you'll probably quite like my stupid pictures. It is all the weather isn't it.