I read some profoundly gruesome news in the paper this week, and it had nothing to do with Ebola, rather it had to do with Fantasy Fest, the witches' brew of nudity and drunkenness and financial largess that starts next week. As usual the bacchanalia is filling up the hotel rooms in town except this year there are about 500 fewer rooms than usual as the chain hotels on the Boulevard are still under reconstruction. According the tourism folks all the overflow is spilling up the Keys toward Big Pine. Fantastic! I will be sharing my Fantasy Fest commutes with a bunch of over excited intoxicated nude zombie car drivers all next week. 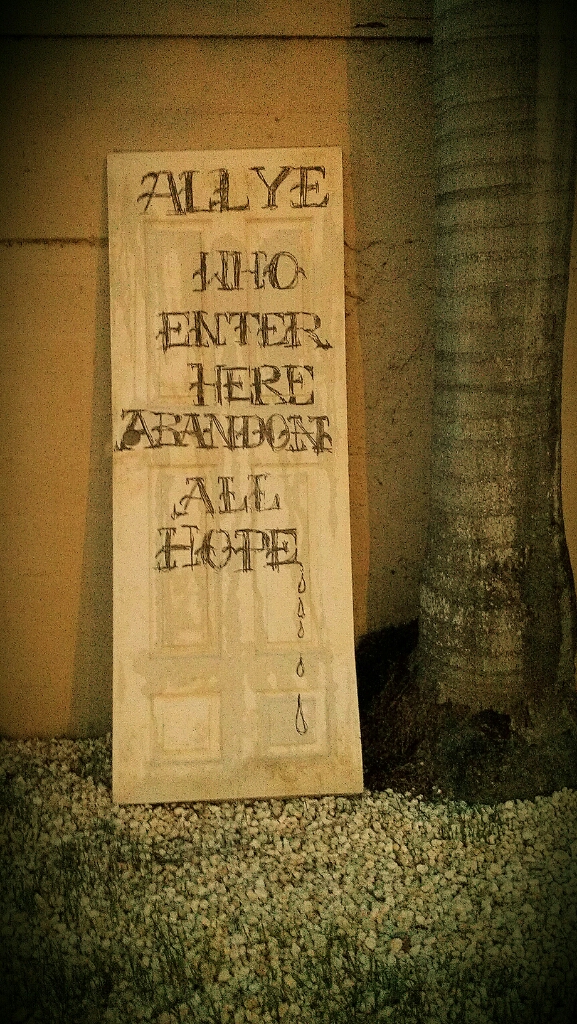 These sorts of considerations don't interest my dog one whit, especially when some brain dead consumer left a paper bag full of last night's dinner on the ground in a parking lot. Clean up was gross but fortunately the dumpster was but a few paces away. Which prompts the question: why was the bag left on the ground in the first place? Key West has the capacity to be stunningly beautiful, but somehow the people here manage to let the place down.  Cheyenne doing her part to clean up this town: 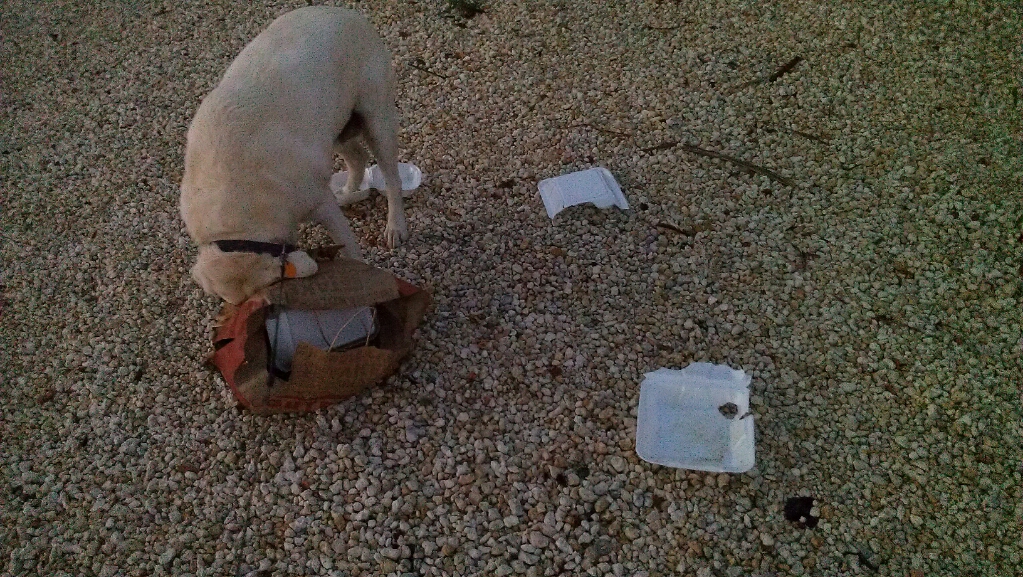 Lazy Way Lane is closed for the nonce, which news is about as welcome to the businesses on that little street as the news of hotel guests commuting highway one is to me.  Cheyenne was tugging the leash so the photo is not as crisp as I'd have liked but I think the sense of it is abundantly clear: please come and spend money. 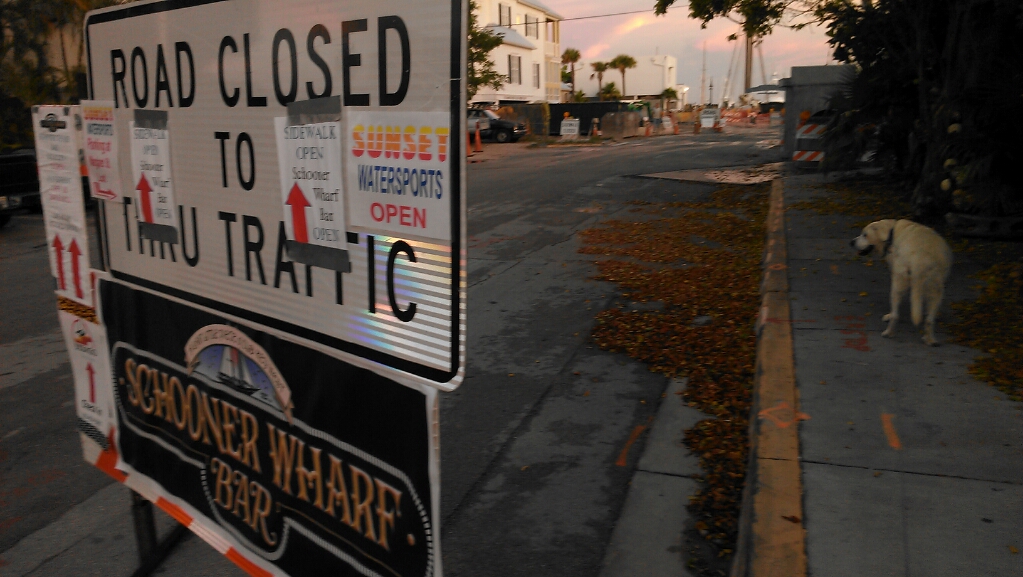 Pritam Singh's latest parking lot-free development is well underway, a resort of magnificent opulence no doubt going by the curious name of "The Marker" as though a building in the tedious "Key West style" in any way resembles a navigational buoy. 96 rooms and parking for two dozen cars is a style that will leave it's mark, no doubt about that. 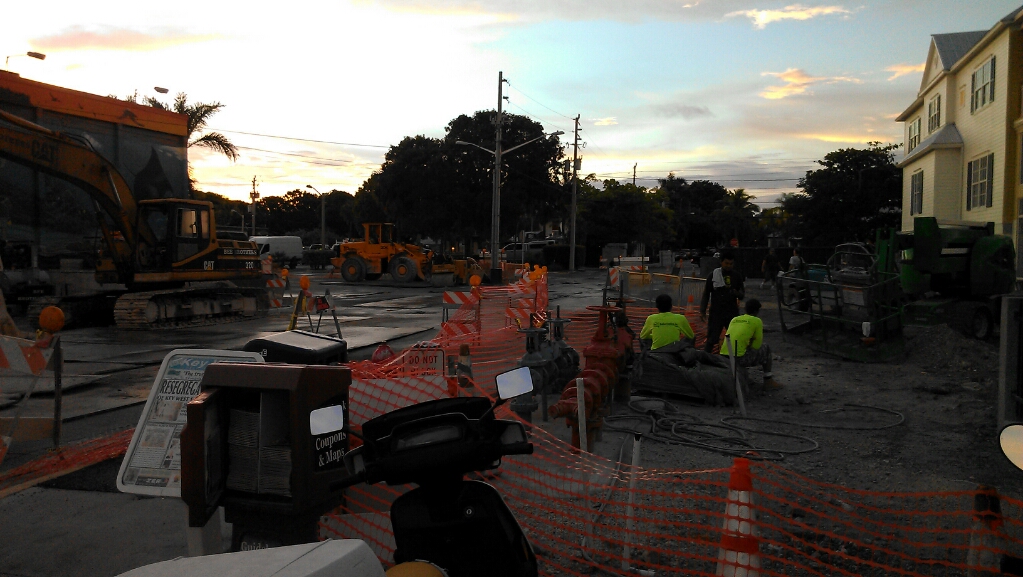 Lazy Way Lane has rather lost its own "Key West Style" as seen previously on this blog: 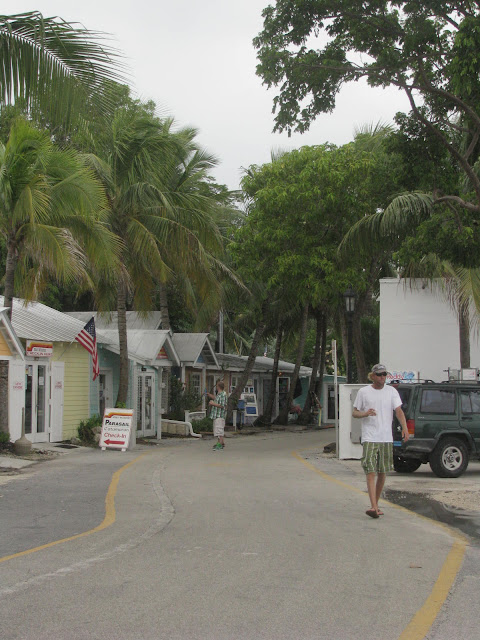 Nowadays its more an extension of the construction site. Doubtless the former eccentric glory of the waterfront lane will return, though I wonder how this place and  Schooner Wharf Bar will make out with this hotel looming over them. 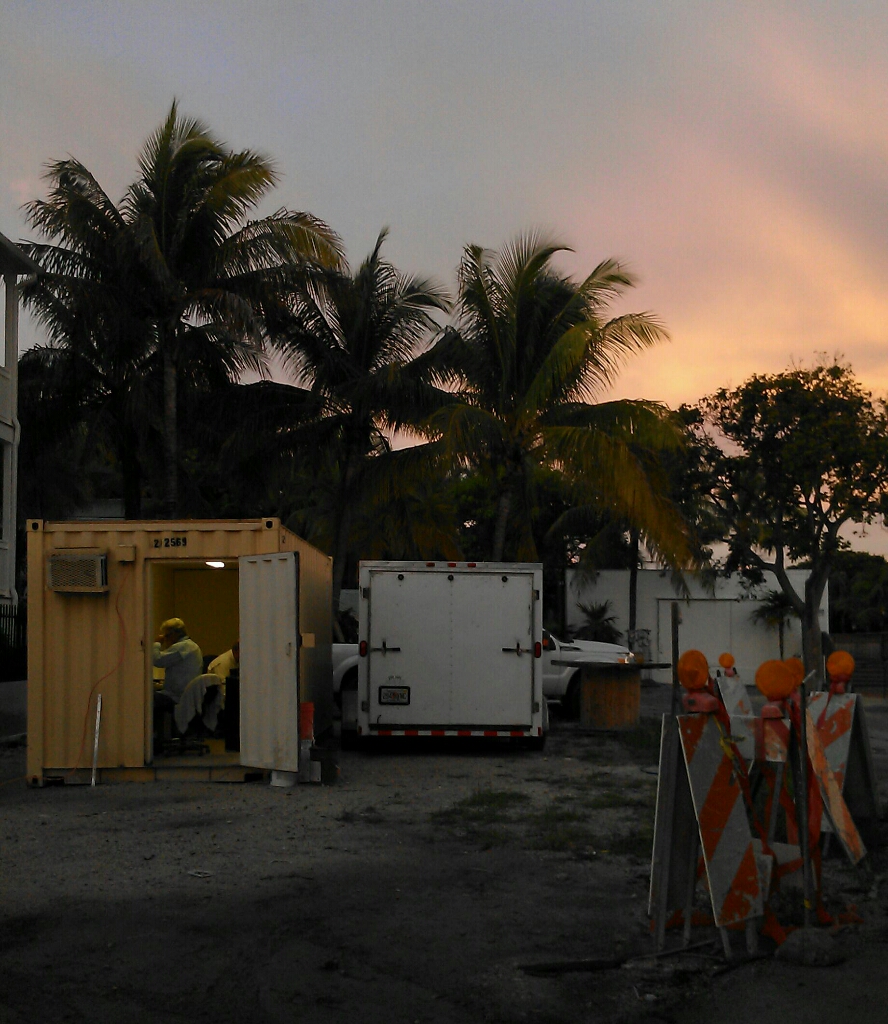 The world was backwards: looking west and seeing a gorgeous sunrise over the Galleon Resort? 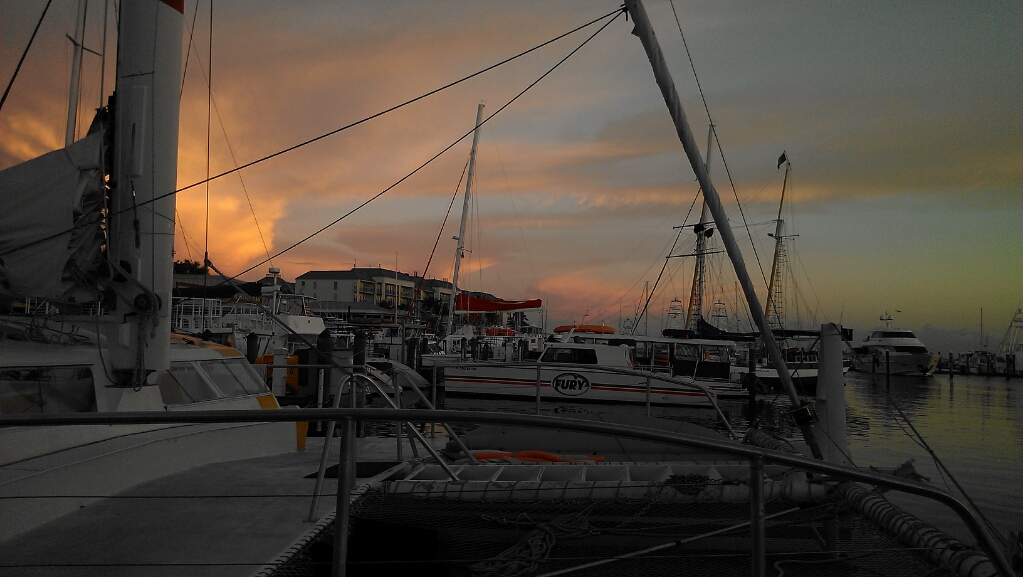 It was broad daylight by the time Cheyenne got us all the way to Mallory Square. She loves this walk and has a routine she likes to follow, criss-crossing the streets, checking her favorite spots, And she comes across a coconut vendor. Hmm. Nothing edible, time to move on, nothing to see here. People ask if Cheyenne is friendly and when I say "NO" the judgement is that, de facto, she is therefore aggressive. Not at all, she is simply not friendly, not interested in you or your dogs or anything. She is interested in what she is interested in. Which is not to say others aren't interested in her. She amassed a following of very interested chickens in Mallory Square, did my fierce Labrador. 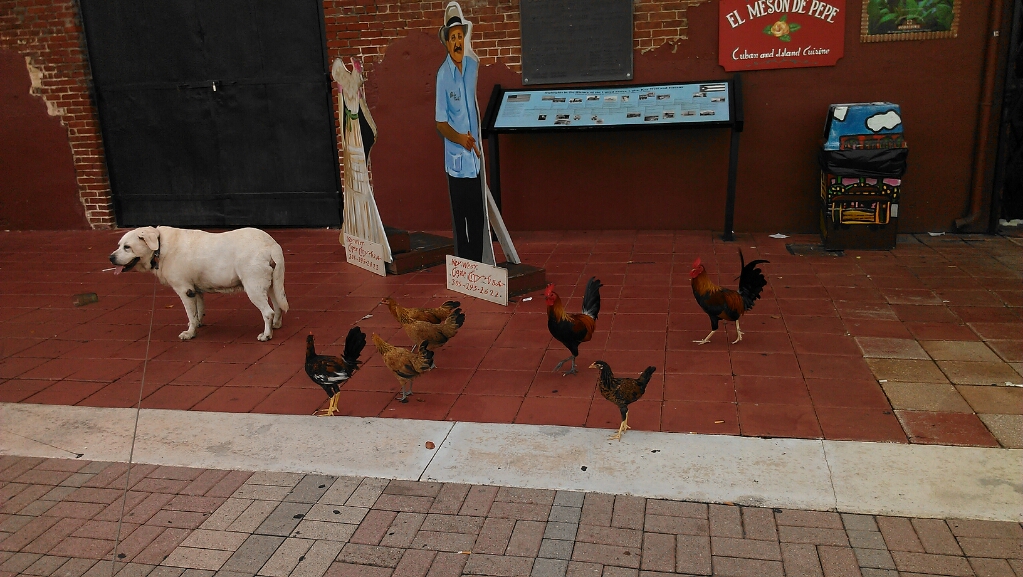 She ignores mockingbirds when they dive bomb us so chickens don't stand a chance of drawing her attention. A puddle on the other hand is a thing of beauty, a fatal attraction for an overheated elderly Labrador on a long walk. 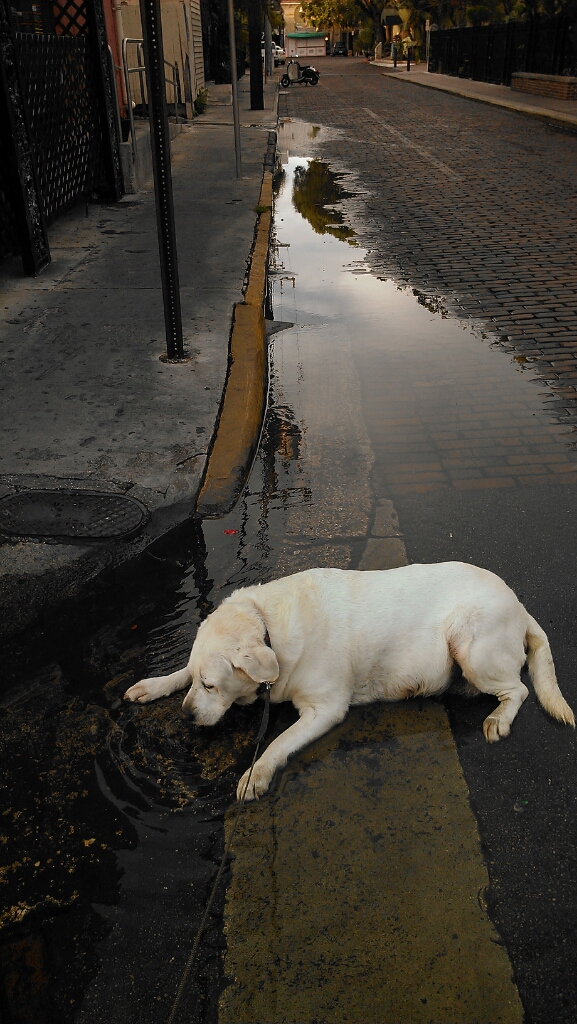 "Hey! Is that Cheyenne?" Well you have to give the man kudos for running me down and confronting me on a public sidewalk. He was actually very friendly and said he was Bob from Connecticut who after years of hanging at out the Galleon (not with the louche GarytheTourist a loiterer at the Galleon of ill repute) decided to set up house in Key West. August is too hot for a temperate man from New England so only the hardiest of us  can apparently live here year round. 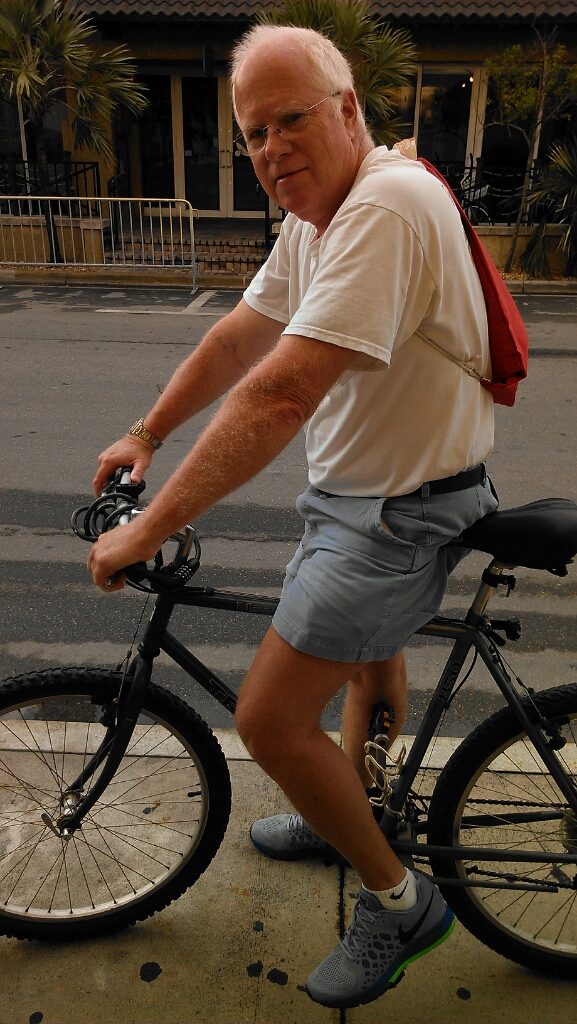 He blends in rather nicely wouldn't you say? A red backpack on Front Street and not a snowbird. 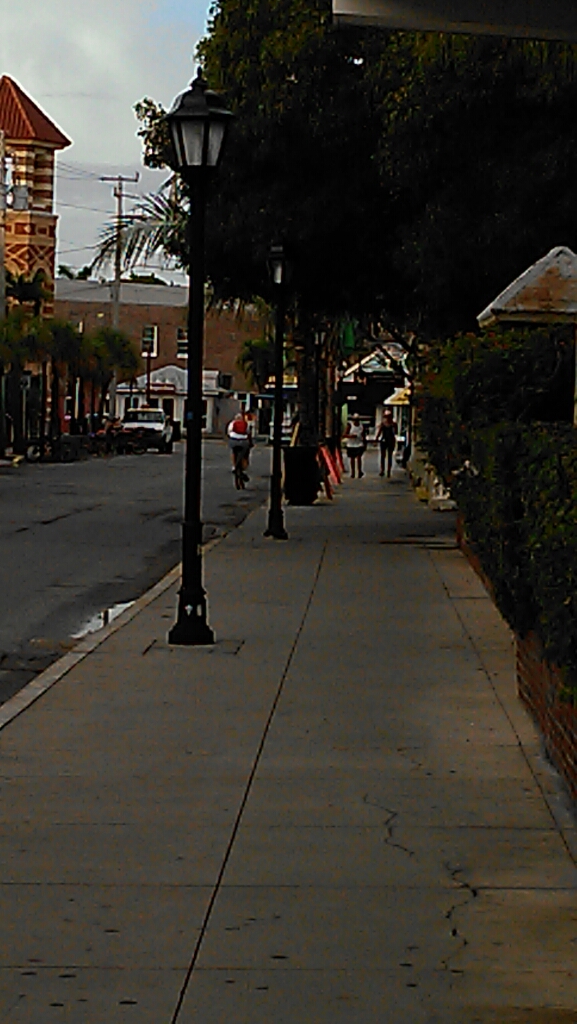 And we end where we started, with Key West's cozy relationship with trash. This time in the water. 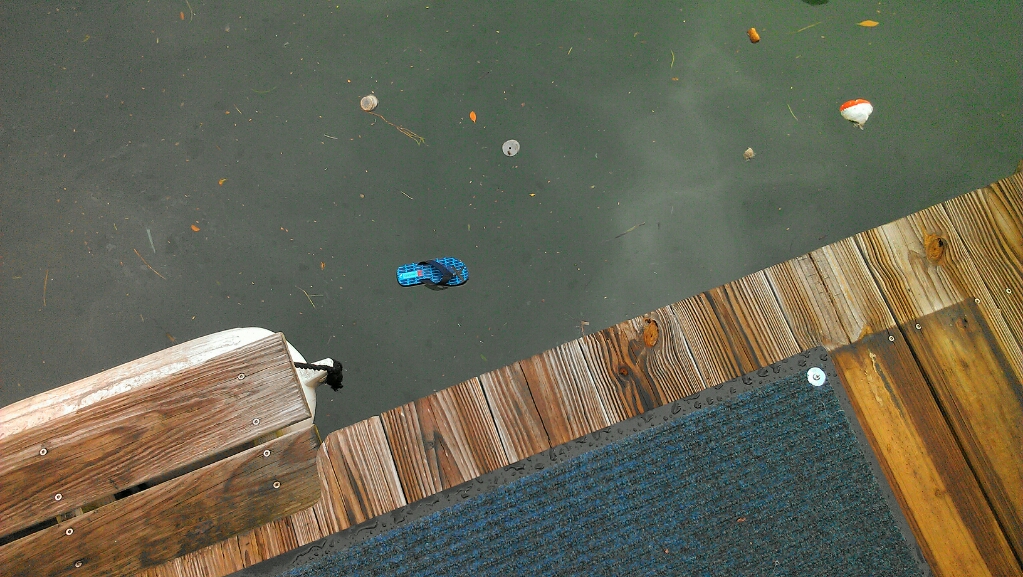 Not the sort of crystal clear waters you ache to swim in, are they? I pick up after my dog, but who picks up after the people?
Posted by Conchscooter at 12:00 AM 5 comments: