I saw a French movie years ago, when watching movies with sub-titles was not considered subversive and one of the characters in Diva went around trying to kill people, saying nothing but with a mysterious earbud in his ear. Part of the mystery of the drama was what was he listening to...And I feel the same way when I see the influx of winter visitors bringing their healthy active lifestyles with them. This guy was jitterbugging about waiting for the light (good man!) unable to stand still lest his cardio-thing dropped to unacceptable levels. And in his ear he was getting instructions from who knows where. 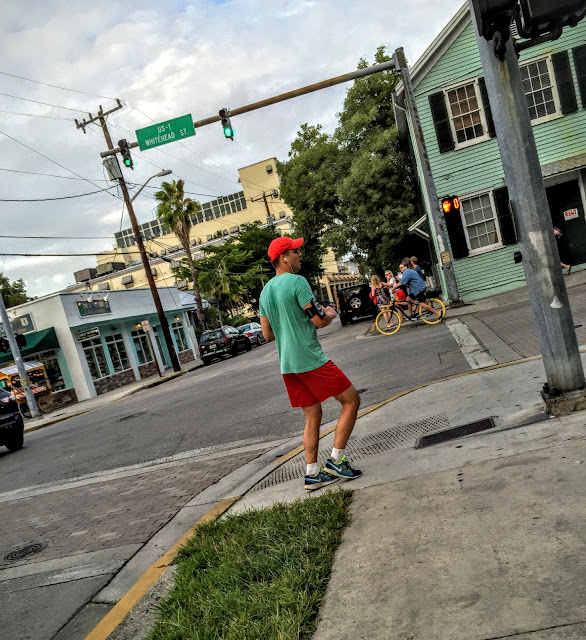 "Coming through! On your right! I'm here!" he called out down the canyon that is Fleming Street next to La Concha. I turned expecting to see  some sort of impromptu procession and it was just some guy on a bike. I'm not sure why he thought car drivers would notice him. 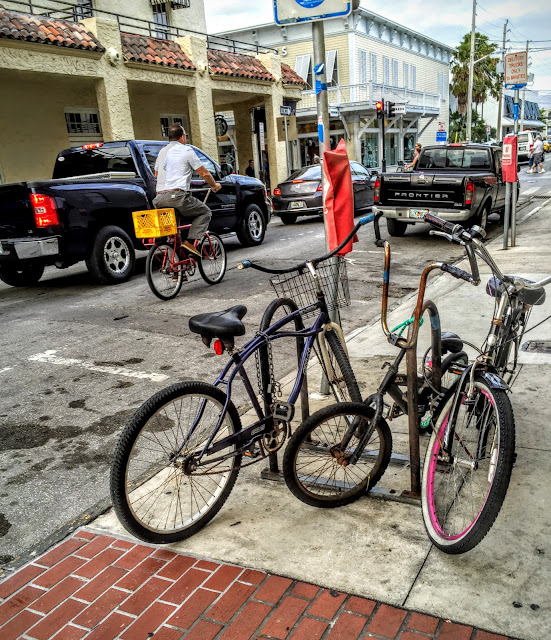 The burden of living on the streets. I can't imagine pedaling my life around all day like this. I wonder how it is we can't harness the determination and resilience of these people who put their heads down and keep pedaling. 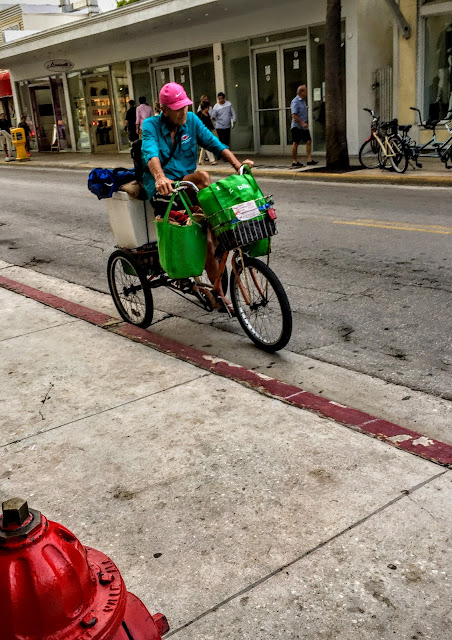 What a motley bunch we are.  Well fed, dressed after a fashion and housed and it makes all the difference, or so we think. I wonder how Key West will weather the storm of intolerance that many see coming from the White House over the next few years. Will they roll back gay marriage? Can they? Does cutting medical care for 20 million Americans lead to a balanced budget? And why do I care, I'm all right. 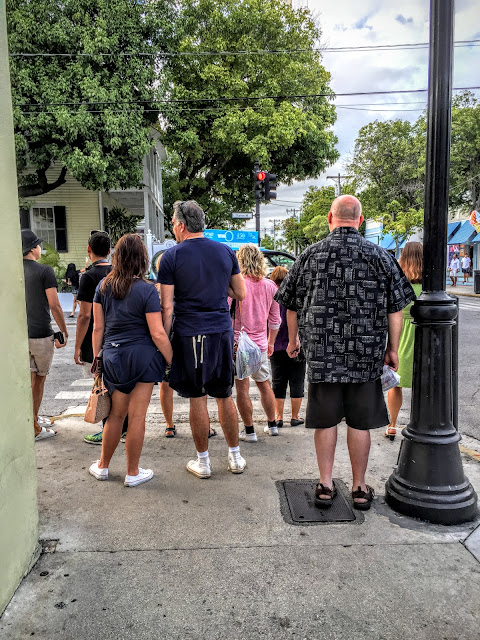 I hope the economy keeps going as Key West lives and dies by tourism and lately this town has been bursting at the seams with visitors. They bring money and crowds and slow traffic and they come year round almost. 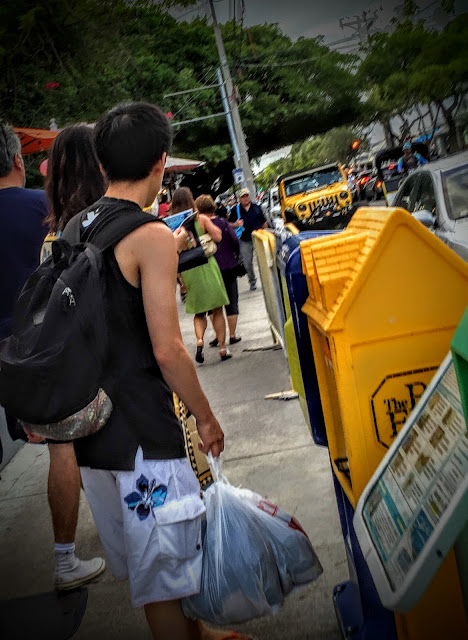 Will uncertainty and change drive them away? Will the Grater in Chief make them feel greater? I stopped using Facebook during the election campaign as it seemed like a no win proposition and everybody yelling at each other made it worse. 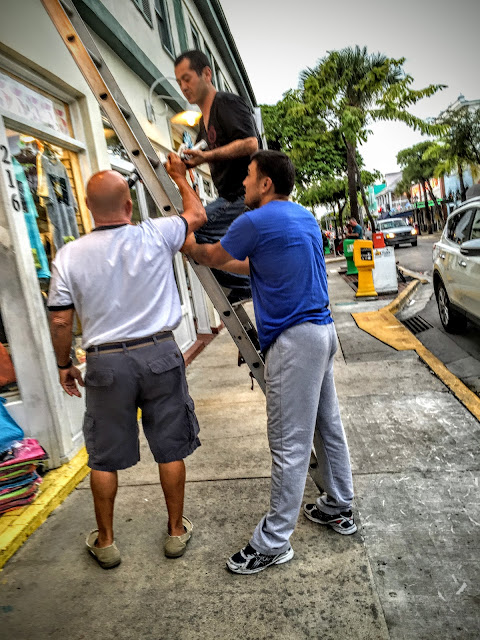 Key West has survived period of far worse uncertainty and has flourished for a long time no matter who was in charge of the rest of the country so I'm not particularly fussed at this point. Skies aren't falling and I doubt they will for most of us. In times like these the Key West motto about everyone being members of one human family cuts two ways. 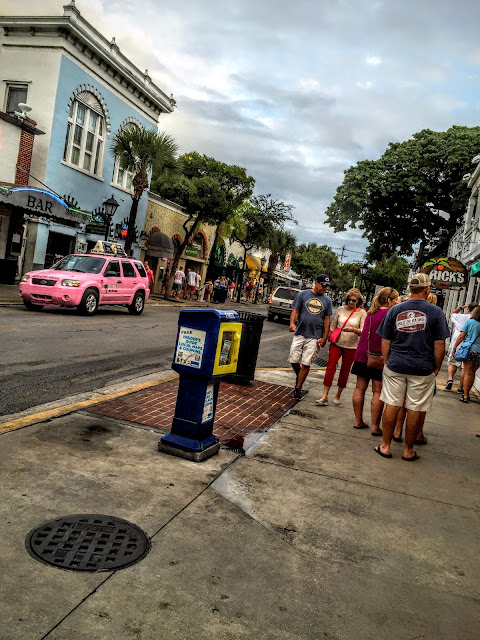 Either it seems like a ridiculous superficial cliche or it may seem like the most pertinent sentiment we need to live by in a world where anything can happen.  To have lived through an election season dominated by two candidates no one much liked seems dire in retrospect except to those handful of people on either side who supported their candidates rabidly.For the lukewarm rest of us one human family is no bad motto to live by. 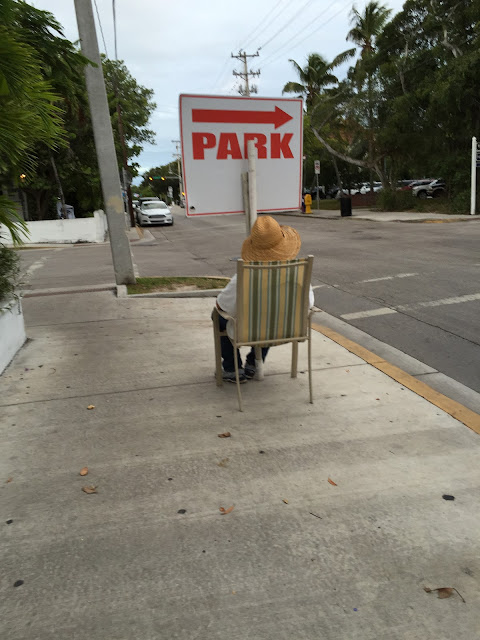 And life will go on. Cars will be hard to park in Key West. Illegal aliens will undoubtedly be washing the plates you ate off at the restaurant you visited in Key West. Shopping will continue among the monied classes and the sun will continue to rise. 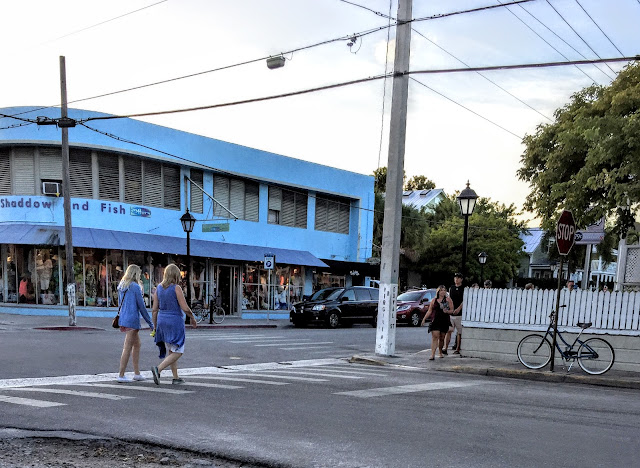 Me? I'm going to my preferred ice cream shop at Flamingo Crossing and I shall celebrate surviving another protracted season of insult hurling between politicians and on Facebook by eating a soursop ice cream. 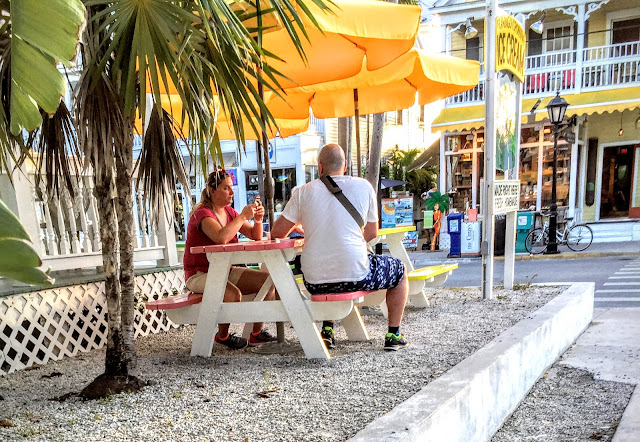 Have a nice day. And please, don't mess with my Medicare or my Social Security. Especially if you plan tax cuts for millionaires. Thank you.
Posted by Conchscooter at 12:00 AM 2 comments: