I was without Rusty, imagine that, and I decided to take the camera for a walk downtown, and before I got back to the car I took a few steps along the waterfront. 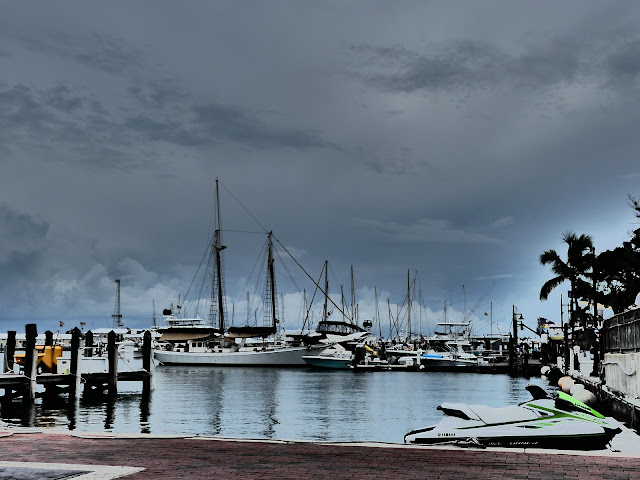 In the distance the Galleon resort defines the northern edge of the enclosed waters which are known as the "Bight." In nautical terms a bight is an indentation in a coastline suitable for use as an anchorage. Which definition was not pleasing to city authorities so they came up with the term "historic seaport" which is what the advertisers call the Bight these days. 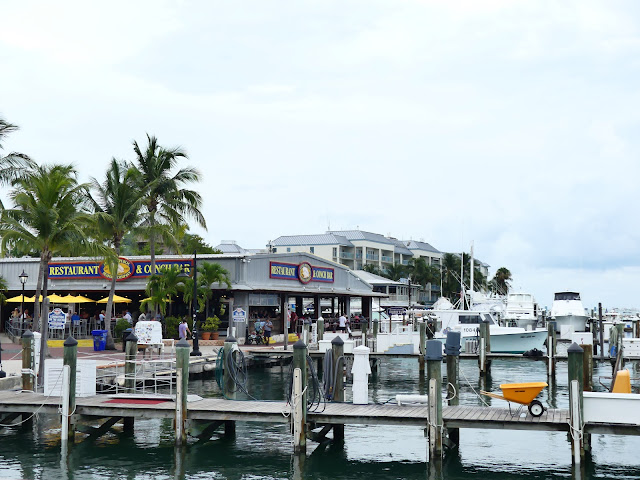 It is where you go to get your pictures, boats and stuff always look good on vacation. 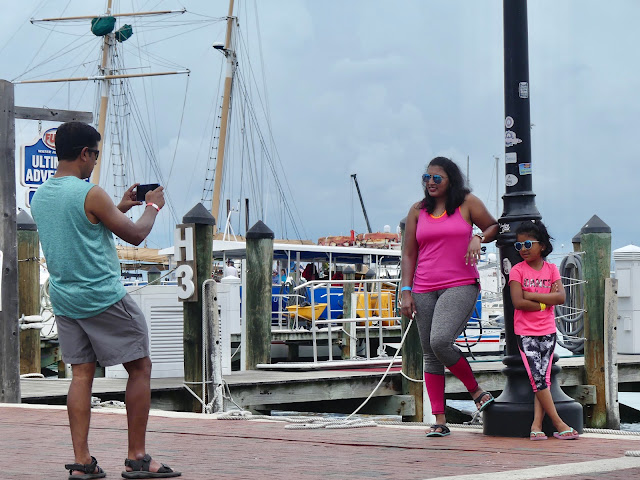 I noticed a splash of stickers on the wall of Jimmy Buffett's music studio which would also overlook the water if it had any windows. He got his start in Key West but most of the time he struts a larger stage than Key West can provide these days. 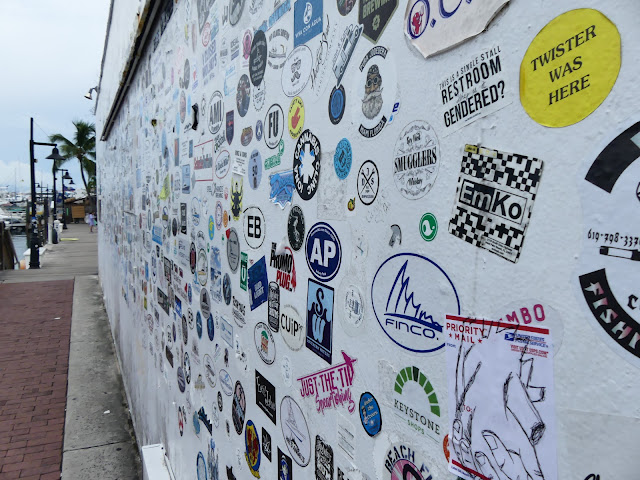 The stone monument on the left below is in memory of the man who created the Bight as a harbor originally for the shrimping fleet. Norberg Thompson was a Key West big  shot at the time even though you don't see his name much nowadays. I doubt anyone notices him on the monument even though he once created a ton of jobs in town. He lived from 1884  to 1951. 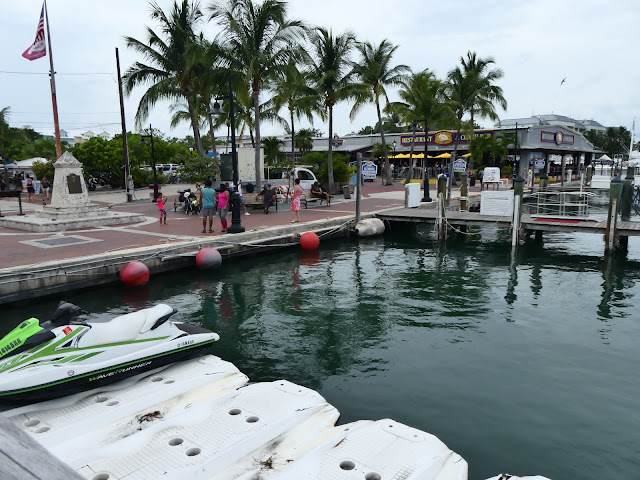 I saw the two flags high over the proceedings below and it always makes me smile to see Key West associated with piracy. There were no pirates in a  town that had no decent harbor, no water, no wood and no- let's be honest here - women. When they got kicked out of Providence Island off Nicaragua they moved to New Providence Island in the Bahamas which put them in a good position to intercept bullion convoys coming out of Havana. Key West was the US Navy base for Commodore David Porter's anti-piracy patrols. But that makes a terrible story for all the pirates cheering up the tourists. 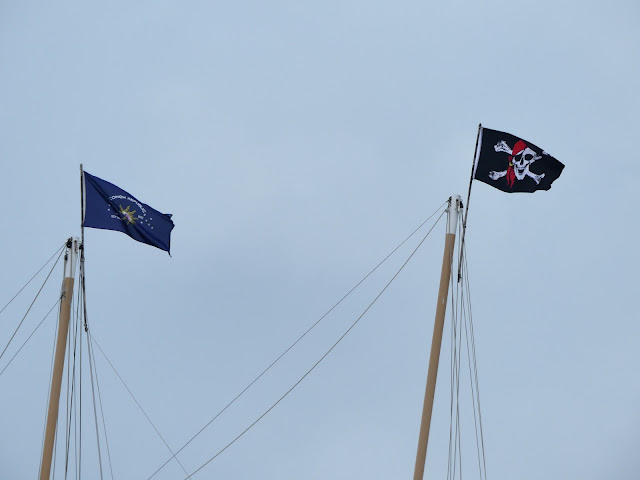 And they line up to go sailing around the harbor, do the visitors. 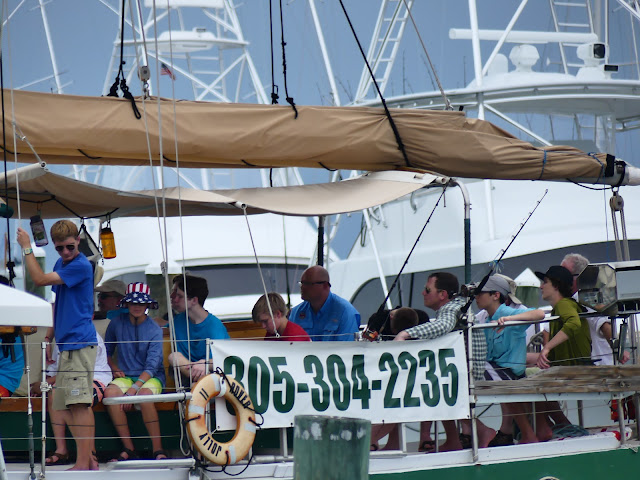 I was surprised to see so many people lining up for boat tours on such a thundery day. 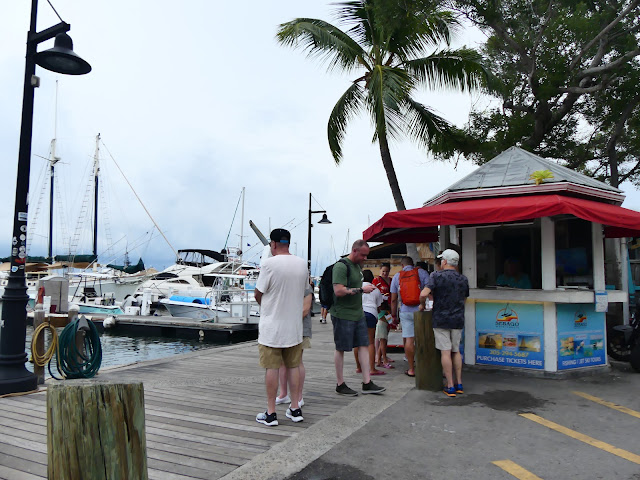 A tropical wave in the northern Gulf of Mexico brought a ton of rain and thunder this week to the Keys. It dumped a bunch of rain on the panhandle and then went inland. It's hard to image we aren't going to see a bunch of storm activity this year but keeping one's fingers crossed is all you can really do until we reach December. Sometimes the Western Caribbean will spit out a hurricane even in December if the waters are warm enough. Great stuff. 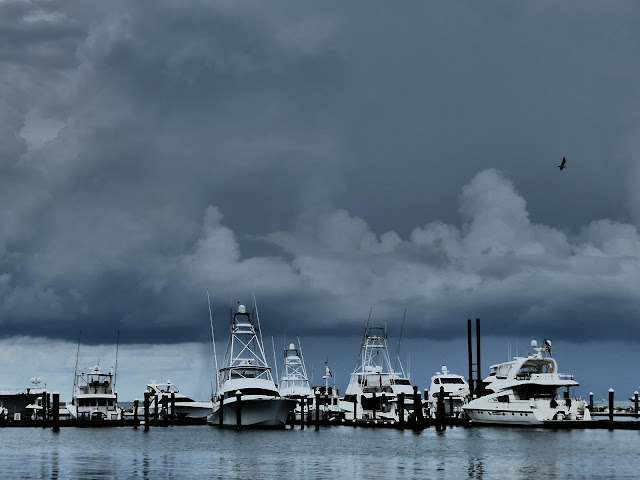 Making my way back to the car I passed Schooner  Wharf the bar that advertises itself as the last little piece of old Key West, and consequently does a land sale business. 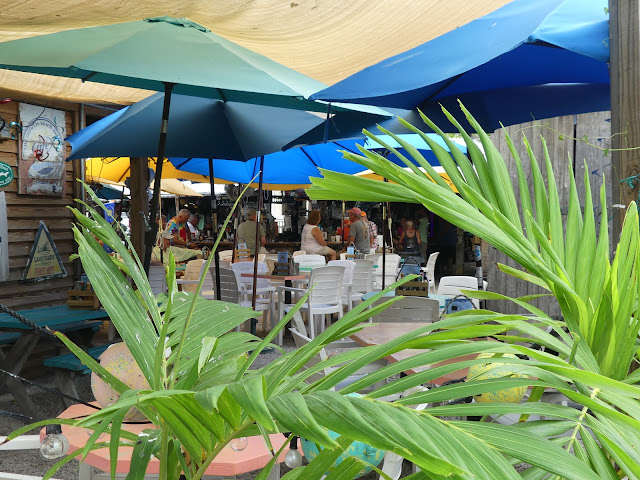 There's always a lot of coming and going around here; people who live on boats self importantly and self consciously landing their dinghies and coming ashore  to be among mere mortal landlubbers for a while. Bums passing another boring day with nothing to do. The well-to-do slumming it at the waterfront tasting the Bohemian life before rushing back to table cloths and waiters and reliable air conditioning. It all happens here. 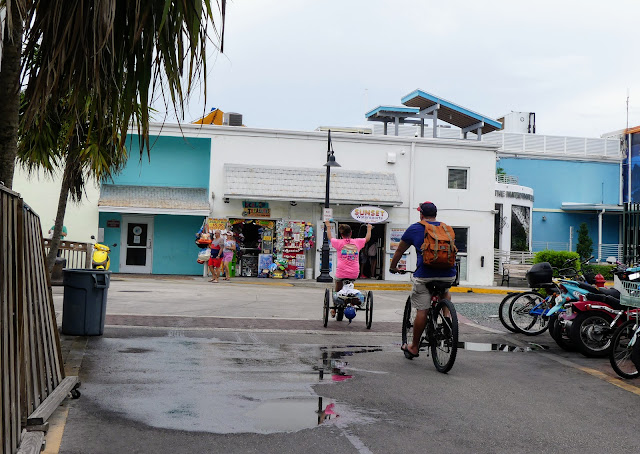 In the shrubbery below lies another landmark, Buddy Owens' Fish Wagon, an open air restaurant, what could also be described as another ast little piece of old Key West. 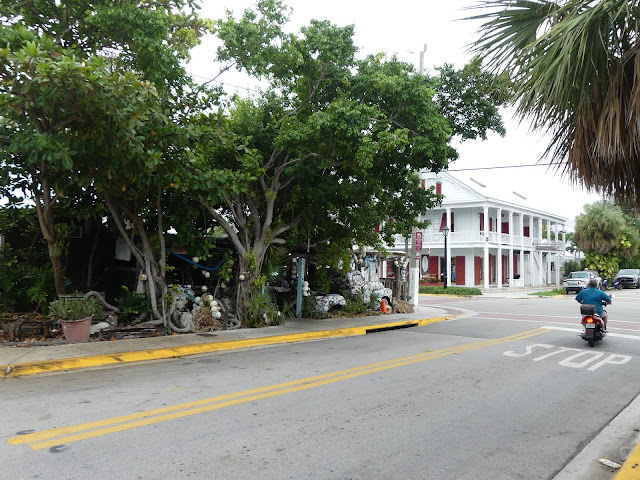 Enough of Bohemia, I needed to get back to my own middle class air conditioning and my impatient dog always eager for attention or a walk.
Posted by Conchscooter at 12:00 AM 4 comments: