Warning! If you walk through this nature preserve YOU WILL DIE! And it will be a horrible death, bitten by snakes and eaten by alligators (which will drown you first). DANGER! 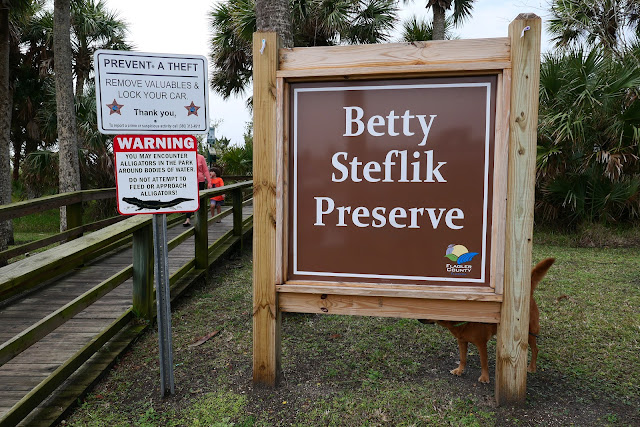 Rusty ignored the sign as did we, for this preserve is lovely and unexpected and a great place to go for a walk if you are in Flagler Beach a town that is full of its own character. And dangerous snakes and whatnot they say.  I promise you will be fine if you go for a walk, and you will come away relaxed and sweaty. 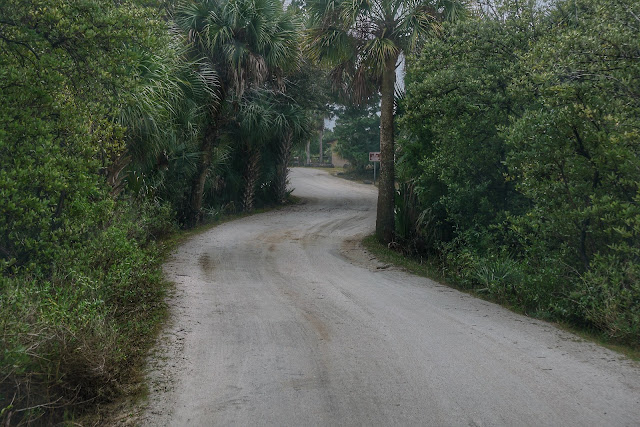 It was an overcast day with a  threat of rain yet we gaily ignored the clouds and parked the van in the vast spacious parking lot. We took off with a dog and a camera  but not an umbrella between us. It is said the gods favor fools and drunks and we weren't drunk. 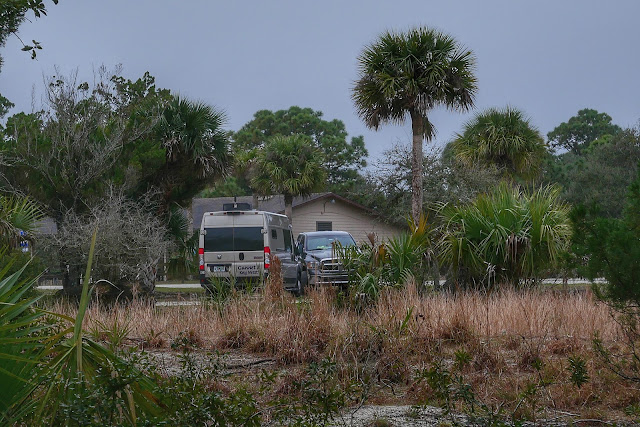 In a moment I shall dive into the life and times of the redoubtable Betty Steflik but first allow me to point out what an extraordinary trail they have built in her memory. It was of course preceded by a Dire Warning that death lurked in the undergrowth but you may be surprised to learn they exaggerated just a tad. You could argue it was a little much, building a  six foot wide swath through the brush but unlike a narrow mysterious trail, here you could roll a wheel chair down here it was that smooth. Even under overcast skies we enjoyed the views, though for me sunshine improves every vista. 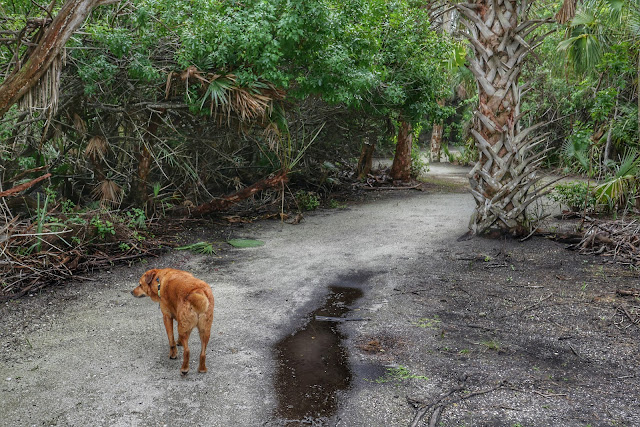 I also read the homeless were cluttering up the park and annoying visitors by their presence so the city organized a location for them and guess what? The park has benches and facilities and no trash and no homeless.  And no heavy handed police presence either. It can be done apparently. I quite like Flagler Beach. 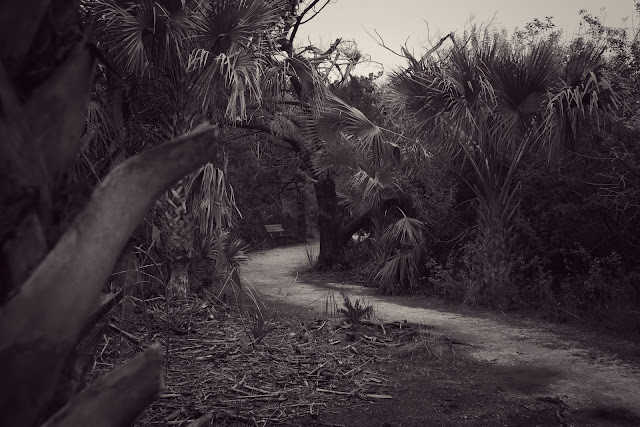 They say the park is 217 acres and I rather ran out of statistics after that. Trails are miles long and all that. All I know is you can walk and hang out to your heart's content and on that you will have to trust me. Or go and check it out for yourself if you aren't fighting snowdrifts in some dark region of the continent. 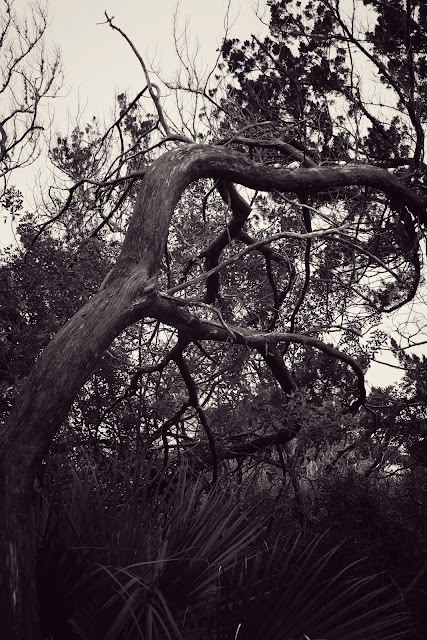 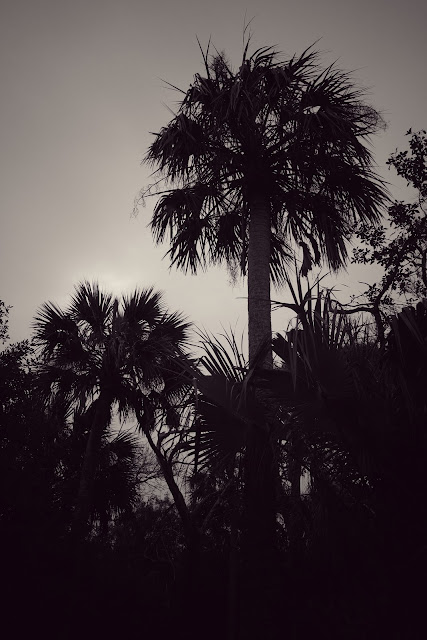 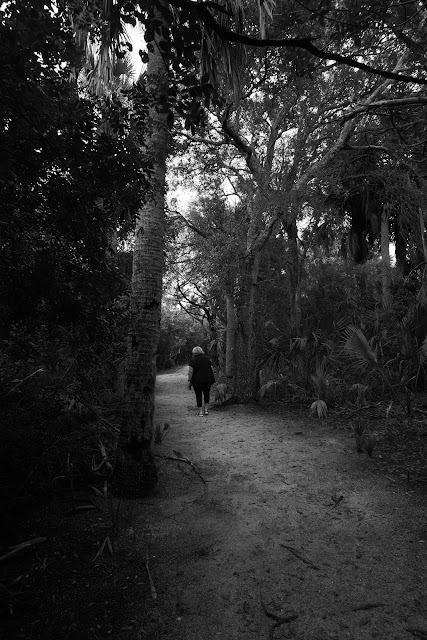 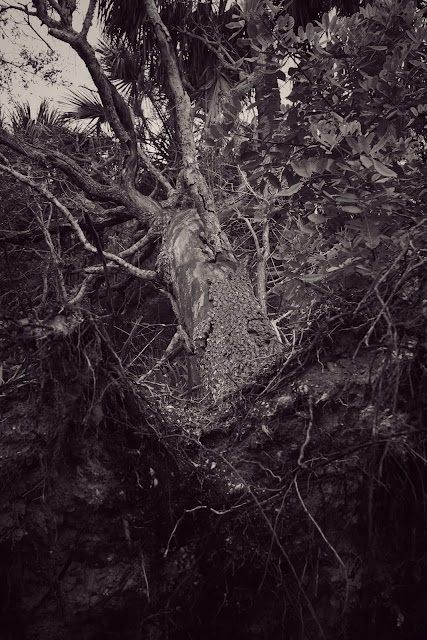 There was some moisture in the air, and on the trees but we carried no umbrellas or ponchos or anything. Because we are smart. If you follow our adventures on the road after we retire I fear you will see more of the same as I am a rather spontaneous walker so perhaps now is the time to point out I fear dehydration in suburban America about as much as I fear snakes and alligators and stuff. I don’t carry water as it is heavy and inconvenient and convenience stores are everywhere. I just wait to drink (and pee) back at the van. Bears in Alaska will be another story and we are busy researching bear spray brands. 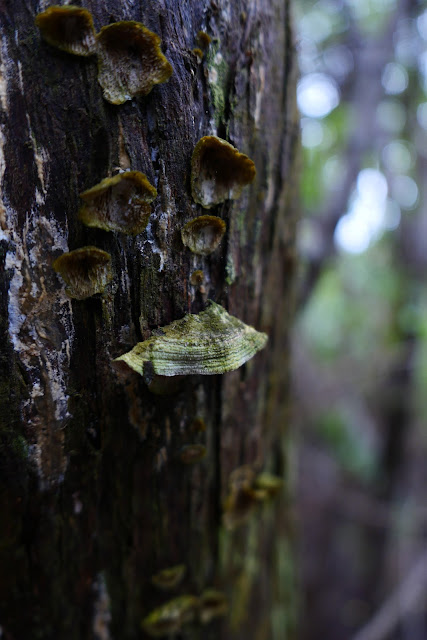 As long as I have my camera I am happy and am able to suffer appalling privation. As appalling as it gets in a country with a positive dread of "discomfort." 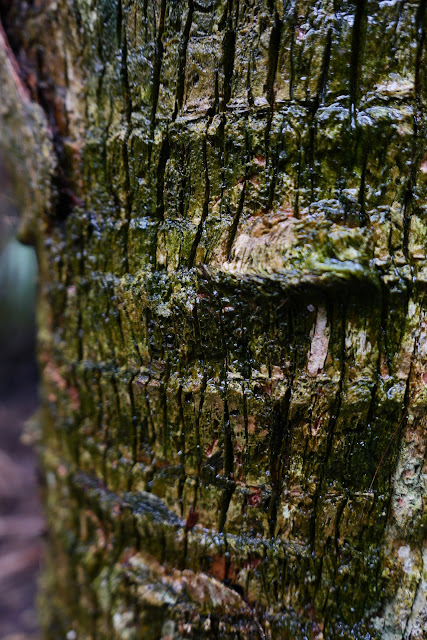 Then we arrived at the boardwalk and there seemed to be a network across the salt ponds and through the black mangroves. My wife kept insisting it would end soon but it never did. We passed a fisherman and his bicycle at a respectful distance and he said the boardwalk went to the library of all places so on we trudged. Indeed the library proudly announces that they are located near one of the entrances to the park. You can see why they are so proud of this place. 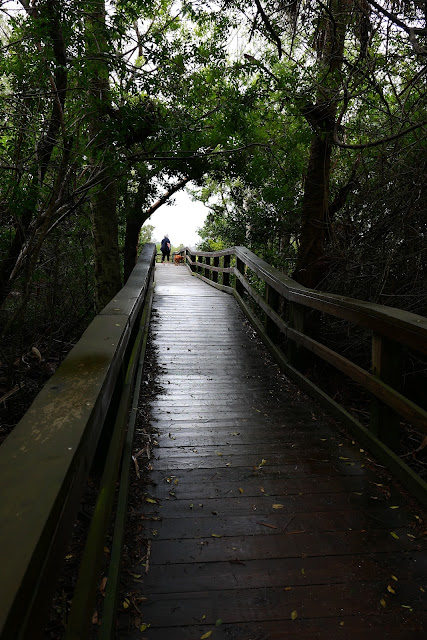 Betty Steflik was a powerful force for good in Flagler beach they say. She married a man with a Hungarian last name but she was born more with the more alliterate last name of "Best." Michael Steflik died a year after his wife and he got a short column in the Daytona Beach News-Journal where his wife who died in 2004 made quite a splash with her passing. The long and the short of it as far as I can see is Betty Steflik, a force of nature, is the reason Flagler beach is unique as she fought to create a local community of local interests. This park is her formal memorial. 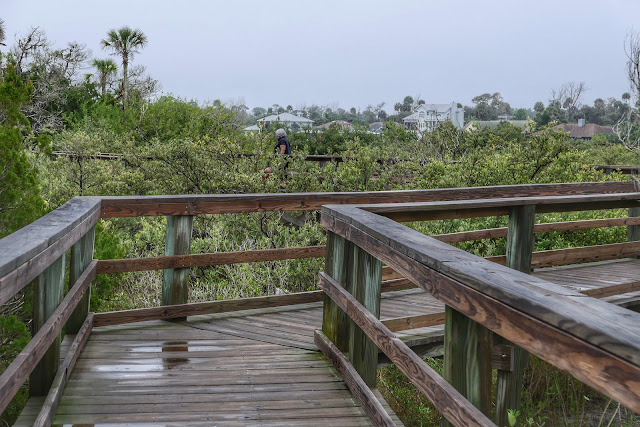 Informally the redoubtable Betty Steflik set about preserving the coastline and the marshes inside her city where she served 12 years as a city commissioner. The result is startling: not just this lovely spot but also the fact that the coast road -State Road A1A - runs right along the beach, where you can park the length of it and have easy access thanks to Steflik's innovative footbridges that preserve the dunes and the sea oats. There is no construction on the seaward side of the road which difference you will notice the minute you drive out of Flagler Beach and into the neighboring towns of Drearily Normal and Stunningly Normal. 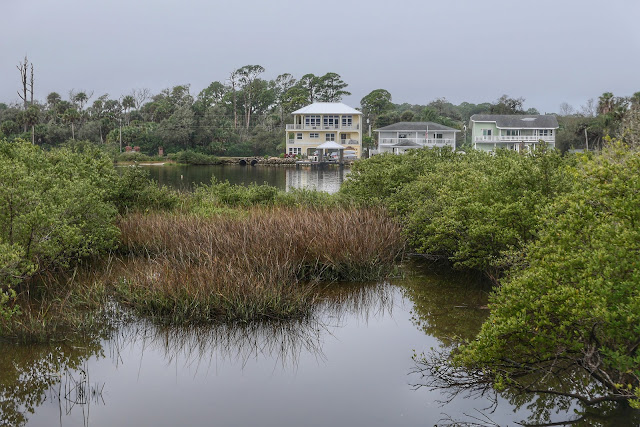 Florida's beaches are public property and the state mandates public access which developers duly provide. The trick they discovered is to provide access but deny parking so most people drive on by. Flagler beach is driven by some other mandate, to make access accessible which makes this an outstanding town. I'm really glad the mysterious Kelly suggested I visit. 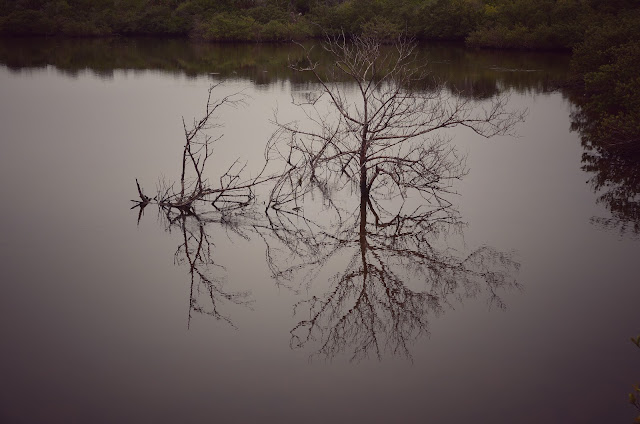 No red mangroves here as the climate is decidedly not tropical like the Keys but the scenery is in all other respects similar and to my eyes equally fascinating. 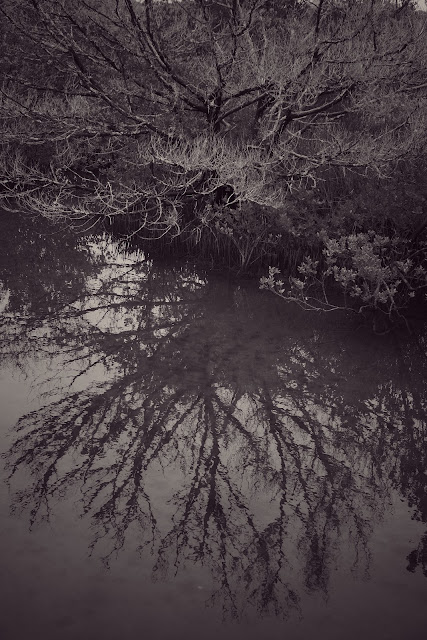 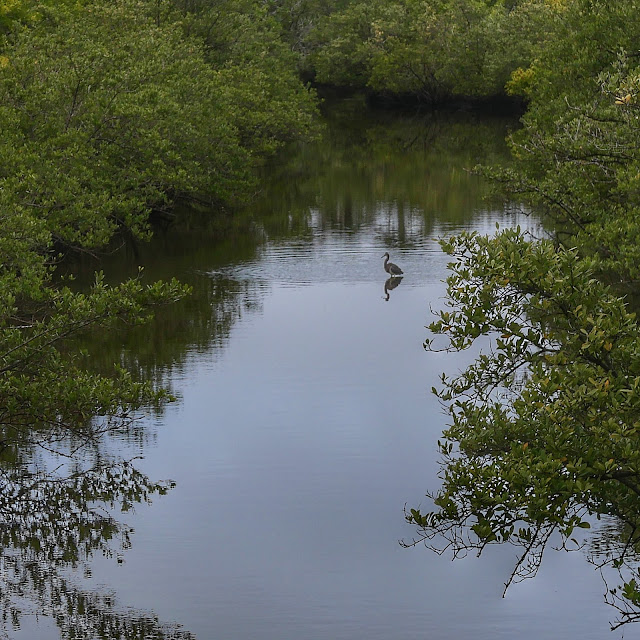 We made it all the way round and back to the van and had settled in for lunch in the empty sandy parking lot when the heavens opened, again, from under clearing skies and took us completely by surprise. We closed the sliding door, finished our sandwiches and congratulated ourselves on our timing, and for once it was perfect. 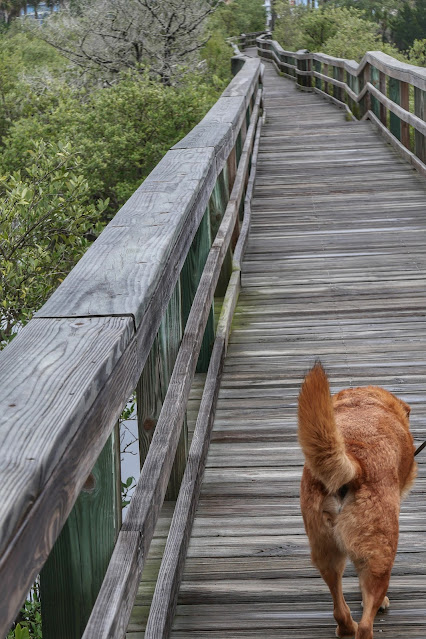 After we arrived back at the town across the endless boardwalk we turned north at the library and paced the Daytona 500 on some nondescript street filled with cars unaccountably anxious to reach their destinations by the thousands. The absence of a sidewalk was glaring and had Betty Steflik been alive I'd have written her a sharp note asking for some pedestrian friendly intervention. Mind you I expect if she were still alive the sidewalk would be there already but perhaps I am unfairly attributing her superhuman powers. 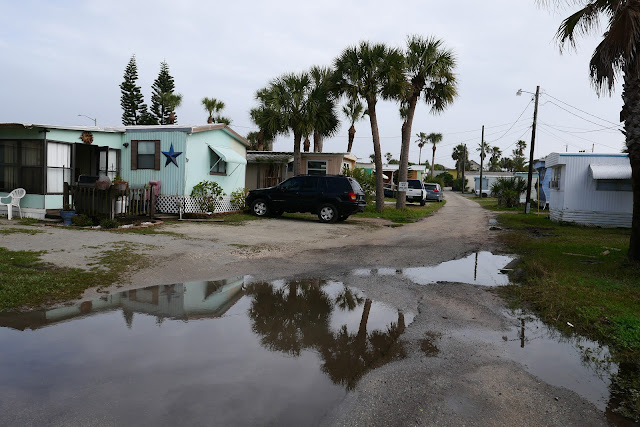 Steflik was born in North Carolina in 1917 and died in Florida in 2004 and the state was lucky to have her is the only conclusion I can draw.
Posted by Conchscooter at 12:00 AM 6 comments: