I needed time away after a hard week at work but my heart fell as I pulled up alongside the parking area. Lots of cars means lots of people and I was decidedly not in the mood for more people. The run up to New Year's Day was hard at work with all sorts of disasters befalling unwary drunken lost souls on vacation. And now here were their more well behaved neighbors fishing walking cycling and photographing. 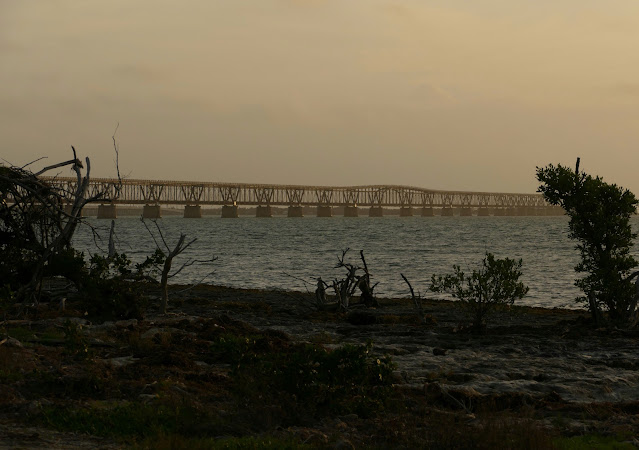 I pulled out the dog and the camera (the dog actually needed no pulling) and wondered what I could possibly find to photograph after a thousand previous visits. Rusty had no qualms and set off nose down ambling down toward the people fishing on the seawall. 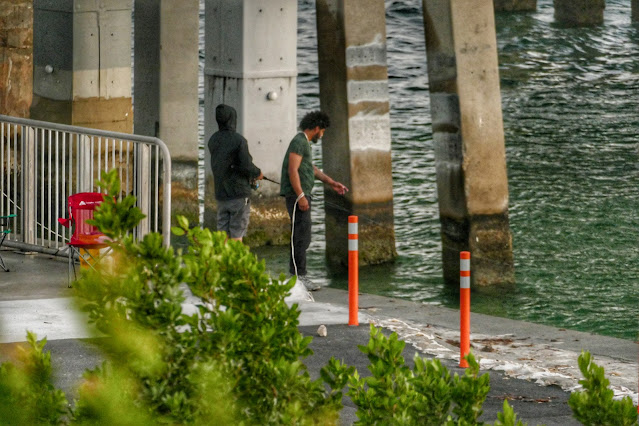 I need not have worried so much as no one much spoke to me, a delightful byproduct of social distancing, and as we strolled down toward the water Rusty and I, a woman came shuffling up toward us. Actually in the distance all I saw was a moving pink splodge through the bushes, that became a woman in some kind of a summer dress that looked completely wrong in that place at that time where shorts and t-shirts rule. She looked rushed and she barely nodded her head as she rustled past me at a steady trot. I think she was not happy at the man who came after her with a worried look on his face. I sort of assumed it was another domestic squabble which at least had not precipitated a frantic call to 911 (no deputies in evidence) but if I was any judge there is nothing to be gained by going on an overnight fishing expedition with a woman in a pink cocktail dress. Poor judgement all round. Not my problem for once. 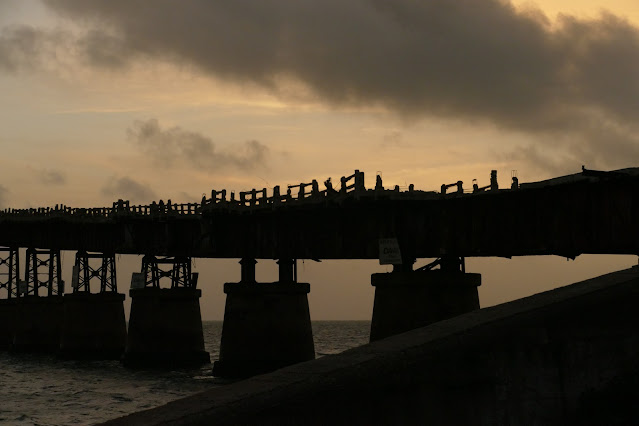 Rusty seems to be sliding into middle age, and I say that only because he seems to have slowed down a bit. He does run from time to time but he enjoys a slower pace with more investigation as he goes. He jumps as sprightly as ever and is always keen to go for a walk but he is more measured. There again, aren't we all? 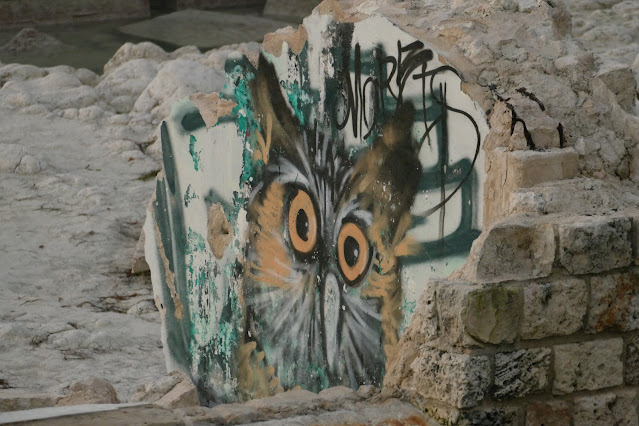 There is always something to look at on these outings. Who knows what crazy artist came out to put an owl on a the wall of the old pump house but I don't remember it being there on my last visit.  I lost Rusty at this point as he raced down the hill (he's not always slow and thoughtful) and I plodded down the trail to the low cliff, where without falling I clambered down to sea level. I love having one spot where I can climb up and look down at the horizon. However I had to keep up with my dog. 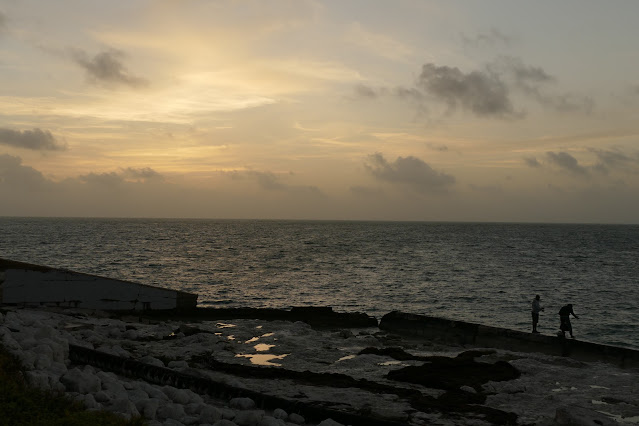 There was a couple sitting at the bottom of the cliff and I saw them watch Rusty run by unaccompanied. They looked around puzzled, concerned perhaps, and looked back as the self possessed  unaccompanied dog trotted along the trail and started sniffing. Stray or abandoned dogs give themselves away by the way they carry themselves, fearful and ready for disaster. Such was Rusty once, but not anymore. This was another opportunity for someone to declare a disaster, an absconded dog, and start using their wretched portable phones to summon help. But happily we were in a relative wilderness and by the time I hove into view from on high behind the puzzled couple Rusty had decided as he always does, to sit and wait for the slow poke.  they relaxed and he got  up for another solo exploration of the beach. 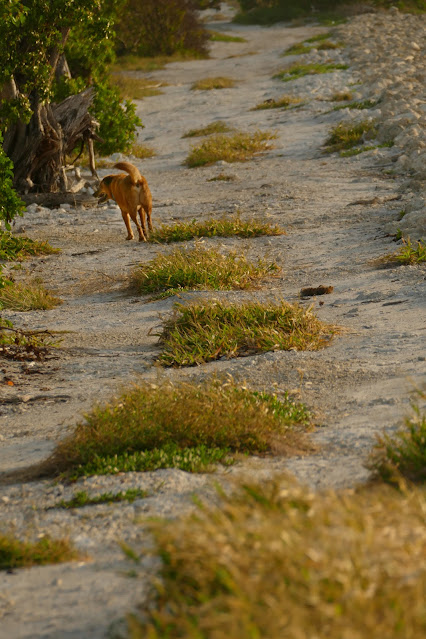 I have a rather jaundiced view of the notion that if you see something you should say something. Some few things are actual disasters but more often they are just people gone slightly awry. "I think he may be dead!" they say upon seeing someone lying on the sidewalk. Nope, just drunk is the inevitable outcome. However if you do see a dead human being you will know and I will know by the tone of your voice as you come to terms with your own mortality. People react in different ways to the sight fo death; some are totally calm and others lose their lunch but there is always a quality in the voice, a sort of fearful reverence, that I have come to recognize. Next year I retire and I cannot wait. 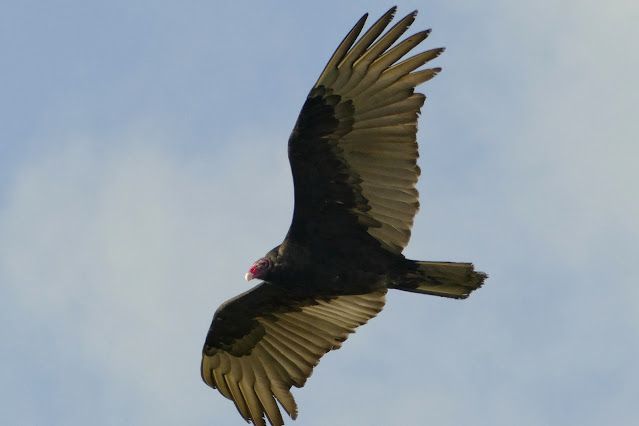 To be out here and to see nature in action all around me is a glorious change, a rest, a chance to sit and watch and listen and not be responsible for anything, least of all an ambulance siren.  The turkey vultures are back for the winter and they too are looking for dead bodies. Lunch doesn't move so I like t make sure they see movement as they hover overhead. Just in case. 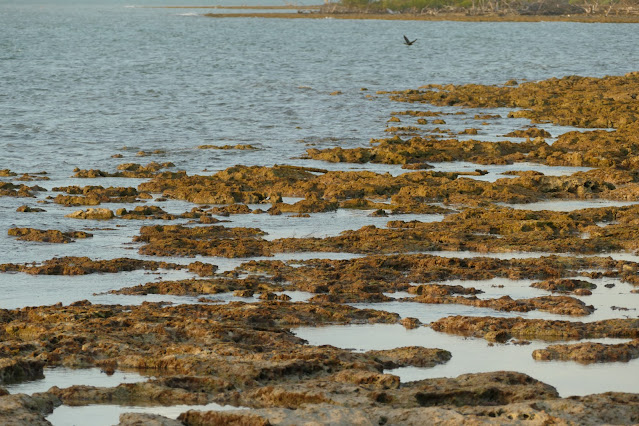 Tides have been exceptionally low which exposes miles of rock dotted with little pools. Rusty and I sat for a while after our walk. He has taken to spending part of each long walk sitting and watching the world by. That worked for me sitting in the grass at the each of the parking lot overlooking the coastline below us. 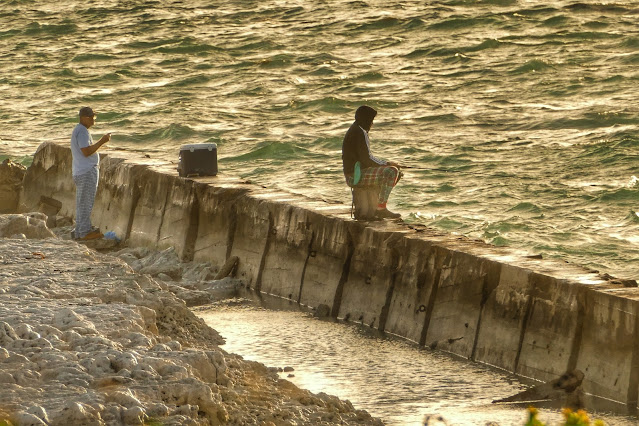 It was a great start to the day and I was not ready to go home. 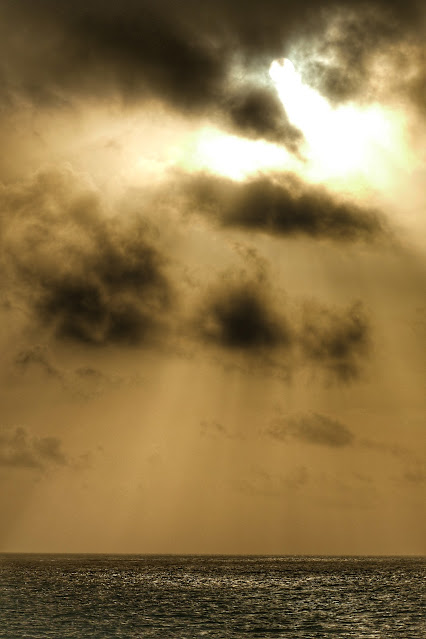 On Friday morning when we showed up for work at quarter to six Keith looked over at me from his locker and said gloomily:"You know today is really just December 32nd?" It turned out that way, twelve hours of more of the same. But a couple of hours watching the clouds and the light and the reflections on the water cured some of that. A few hours of extra sleep completed the cure. This guy's tool is way bigger than mine but I'm not jealous. 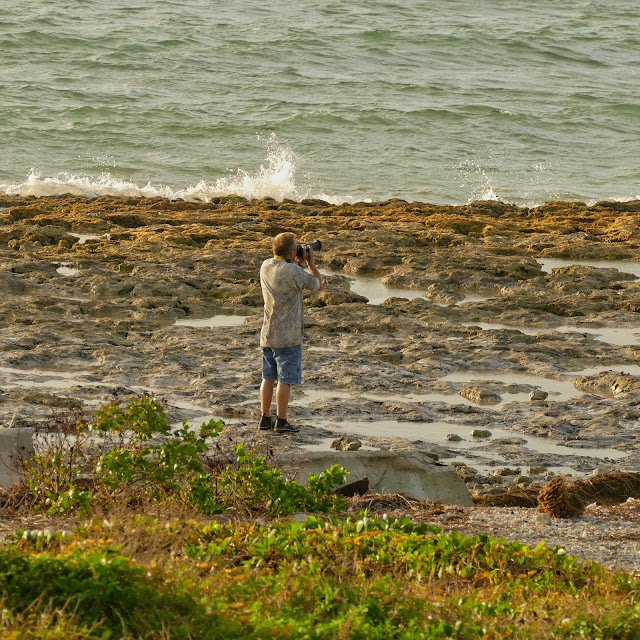 This guy used his iPhone to record his moment but he smiled cheerfully and said good morning as he pedaled by. No conversation in the time of virus. 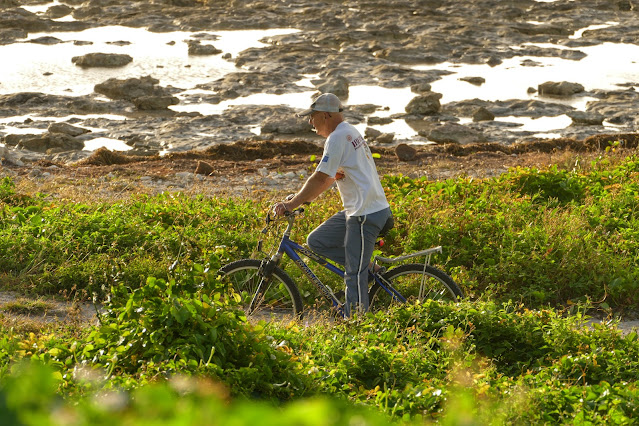 No jealousy regarding men riding motorcycles. I'm a van traveler now. I was driving home from a walk Wednesday night when a motorcycle came roaring round a tight corner, a few exist in the back country, and he took the line perfectly, no wobbling, a nice angle of lean, prefect control of speed. A few seconds later another motorcycle flashed into view. This one missed the turn completely and roared straight past the hood of my car, missing my vehicle by about three seconds and disappeared into the mangroves with an almighty cartwheel, a splash and a flying body. Oh well I thought, here we go again. At least it's not me. I waited a second and turned on my four way flashers. The two riders took off their helmets (good children!), neither appeared to have impaled themselves as I feared and neither was bleeding. She looked about ready to burst into tears and he looked severely embarrassed. "That was spectacular" I laughed, probably not helping. A pick up truck stopped and a big husky man who might have been a relative got out looking serious. He neither looked at me nor spoke. I drove on. No 911 needed please note. 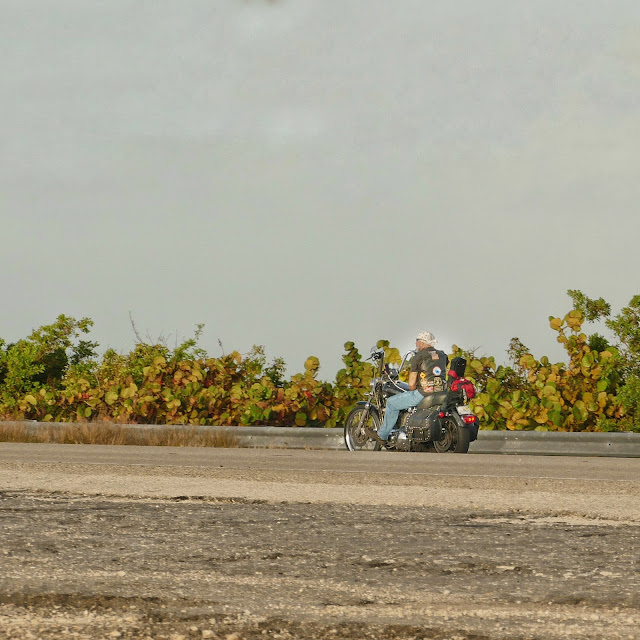 Sitting there watching the world go by a car stoped and the driver, properly masked got out and excused himself very politely. He sounded European, German perhaps but spoke perfect English asking for directions to Bahia Honda State park. I told him the truth because he was very nice and he backed off to his car. That as when I noticed Rusty had got up and sat down right next to me between me and the stranger. I was impressed. I let him know. 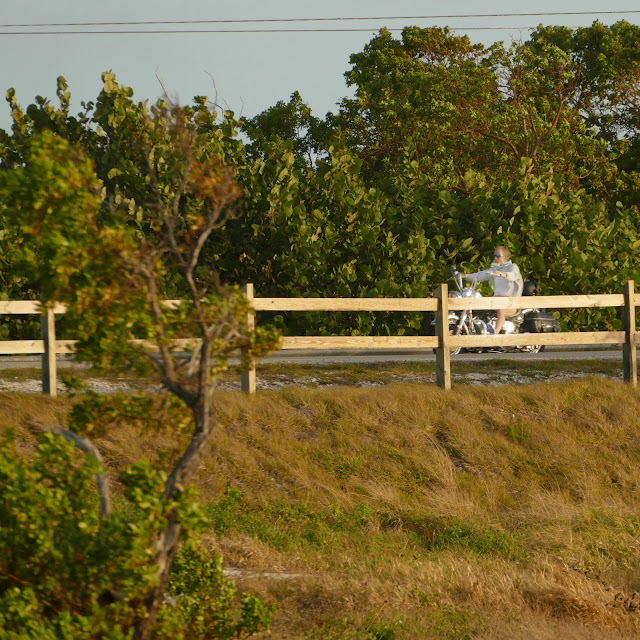 We went home.
Posted by Conchscooter at 12:00 AM 2 comments: