We spent the summer of the last year of the 20th century sailing through rainstorms in Central America. We didn't know it yet as we hadn't crossed the Panama Canal but the Pacific Coast of Central America was very different to the Caribbean side, and in some ways much more pleasant. Debs was the brown dog and Emma was the yellow Lab who sailed with us from San Francisco to Key West. And seemed to enjoy it. The boat was a Gemini 105, a 34 foot catamaran which was a novelty in 1999 in Central America. 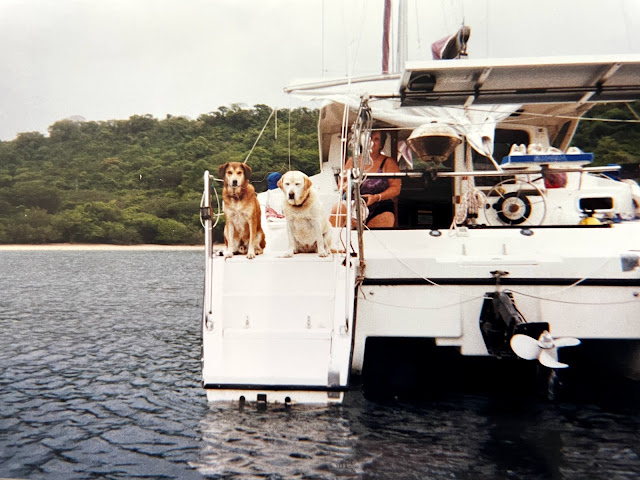 Fishing through the massive albums of photographs I find Layne and I both took more pictures than I remembered, though I do remember wanting to document the journey as both of us had fallen short in our separate lives of travel before we got married. Zip lining was a new thing 20 years ago but we were ready to give it a go. Gloriously free of safety gear, a harness and a pair of garden gloves was all we needed. 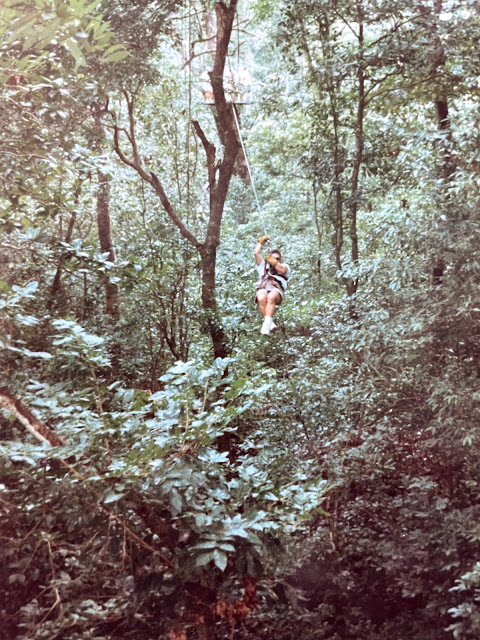 I was never too mechanically driven but  could do basic maintenance even if grumpily. My main goal in traveling by van now is to keep the machine as simple as possible with the least systems. Back then I insisted our dinghy outboard be a very small simple two stroke two horsepower engine that drive us at a gentle walking pace. We did rather envy our neighbors zipping to town on a plane with 15 horsepower motors but when we accidentally drowned the engine in the surf we could as you can see bring in back to life with a toothbrush and some careful cleaning. 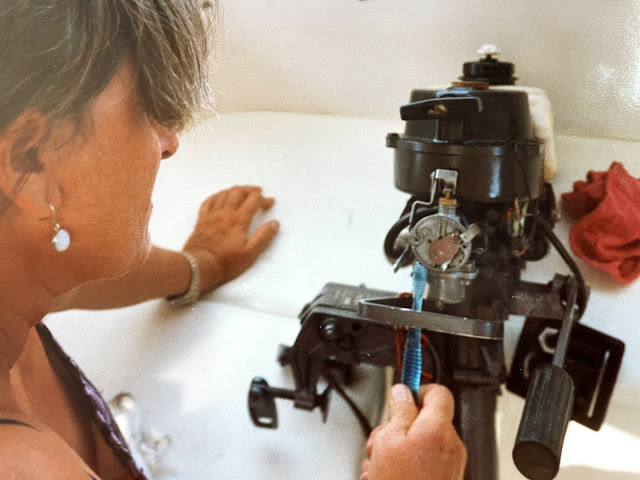 Surf was a constant of the open coastline swept by the Pacific Ocean. When we anchored in a bay, and Costa Rica had quite a few, it was a joy to know I wouldn't get wet crashing onto the beach through the waves with two dogs anxious for their twice daily walk.    Here I ran Miki G up onto the beach at low tide and cleaned the bottom and with Ian checked the condition of the two rudders. Debs pounced on crabs until one caught him and bit him on the nose. 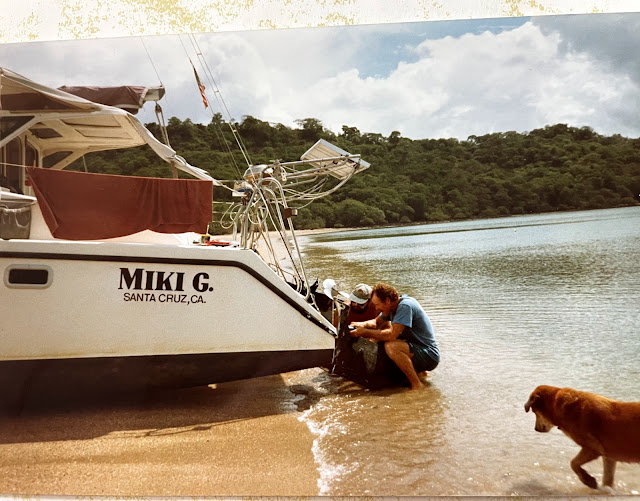 We thought we were isolated, Robinson Crusoe style with a machine to make fresh water from salt, a tarp to catch rainwater and a propane fridge filled with food. In fact we were never very far from the fish counter of the local Publix. I am not a fisherman but I know how to buy them so you can imagine we ate well. 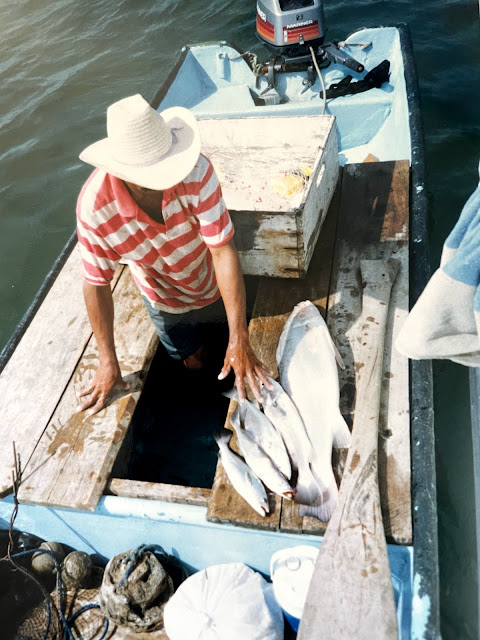 Bob and Barb were our other boat neighbors and we sailed with them all over Central America and the Caribbean. He was a retired computer executive and played engineer with great joy. He loved to sail and he became a bit of a father figure to me. He died back in Arkansas a few years later, suddenly, of a heart attack at the gym. His widow Barb, got remarried to a  really nice landlubber and lived in a retirement community in Arkansas where we went to visit her one last time. I look at this picture and all I remember is laughter as we got stuck in the mangroves, Bob fought the outboard and Barb forced us ever deeper into hopeless  exploration. 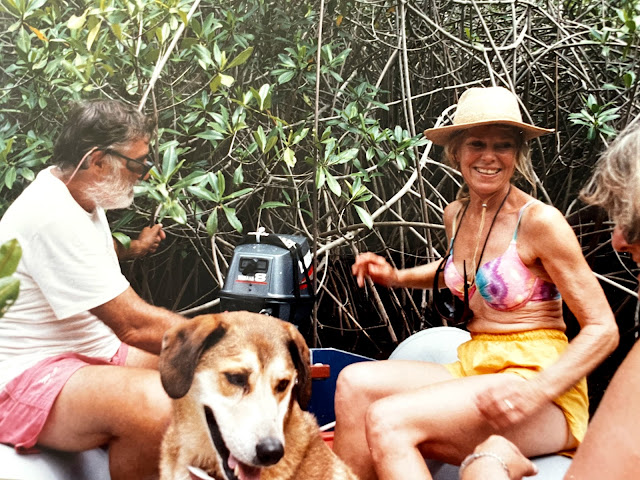 They were glorious days of being youngish, around 40, and not having to do anything or be anywhere. We weren't ocean crossing fiends like Webb Chiles but we were cultural explorers and my wife was indulging my desire to do it on a boat. We both came to love the independence of having our own home, an escape pod from the culture that surrounded us.  The burn out of living out of a suitcase never affected us and we had our life and our dogs and a familiar space wherever we went. Books too: 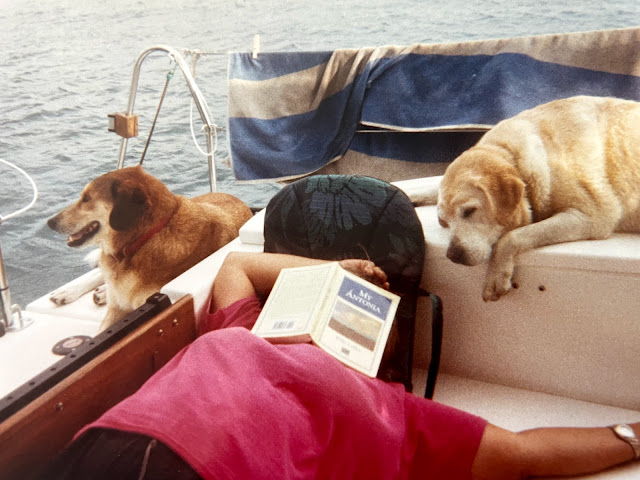 I have heard from other sailors with children that their offspring tended to break down barriers with the locals. I found in the pharmacy at Paquera in Costa Rica big happy Emma did the same for the assistants stuck behind the counter. 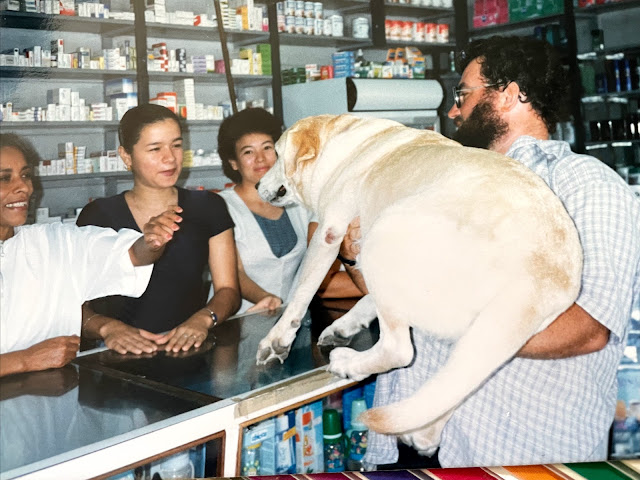 We checked out of Costa Rica, turning in our cruising permit, getting a permit to leave Costa Rica to prove to the next country that we left behind no debts or obligations. Costa Rica is always sold in the US as the most middle class "safe" country in Central America but we found it rather dull especially compared to Panama. We were in no hurry to check in so we dawdled along the coast, technically between countries, and did some more Robinson Crusoe stuff living among deserted islands. Debs was not thrilled about bath time but effort-free water was too good to pass up. Rainy season has its benefits. 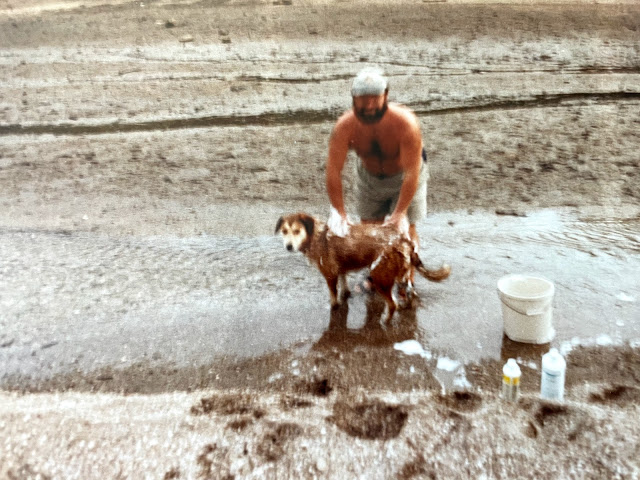 It's hard to overstate how heavenly it was to live that life. The islands were uninhabited, occasionally we met fish camps but we walked the hills surrounding our anchorage until our dogs were exhausted. We had supplies enough to need no one else for several weeks and we took advantage. At night we played spades and slept the sleep of the just.  In our own homes. 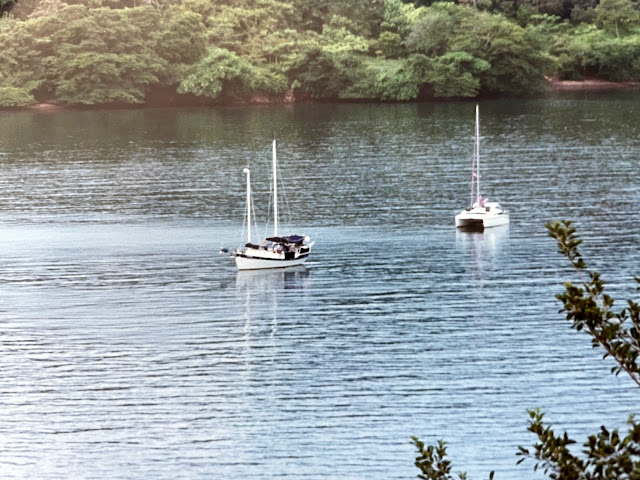 Ian and Anna from Seattle became like siblings for us, people who would be there for a while sharing everything, and then when we separated we always knew we would catch up later and carry on for a while as though there had been no break in the routine. We plan to stop by in the van and see them again in person after a long break. 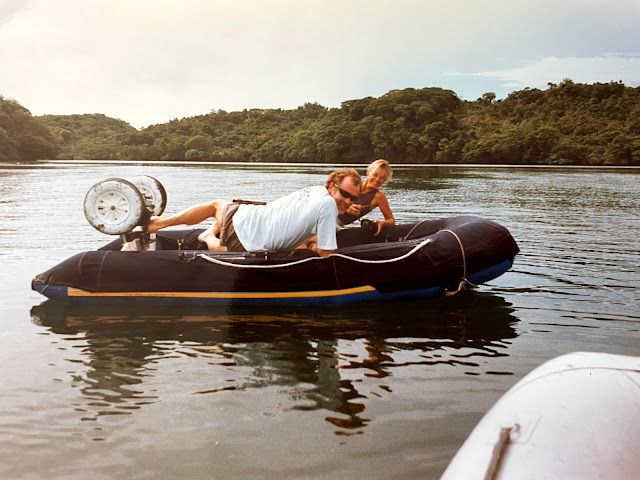 In northern Panama I tried my hand at river navigation, my first attempt since I had run hard aground a decade before up the Napa River.  It took two days to reach the river town of David ("Dah- veed") with no serious lapses. Our boat drew less than two feet of water, a traditional sailboat rammed a rock in the river with  a  five foot deep keel. In Panama we had to deal with dog quarantine. That was fun. 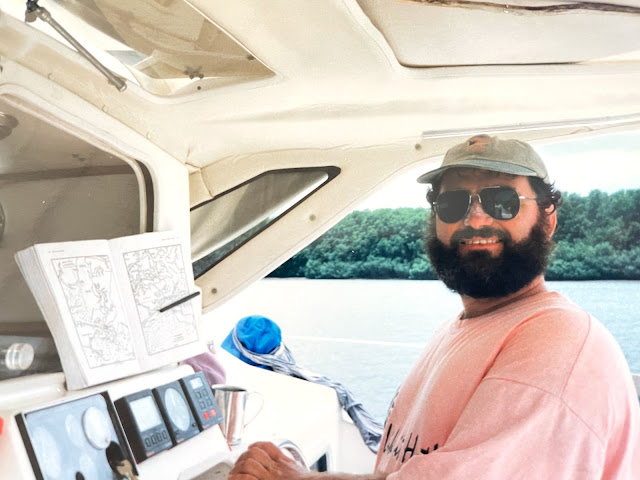