I woke up quite early and I did not want to get up but the plan was to walk Rusty and then go to exercise class then walk Rusty some more then go home and knock off a bunch of chores for the rest of Friday. So yes I did roll out of bed and scoop Rusty up and I drove him to town where I tried out my new to me camera. First picture on Frances Street at Olivia next to the cemetery: 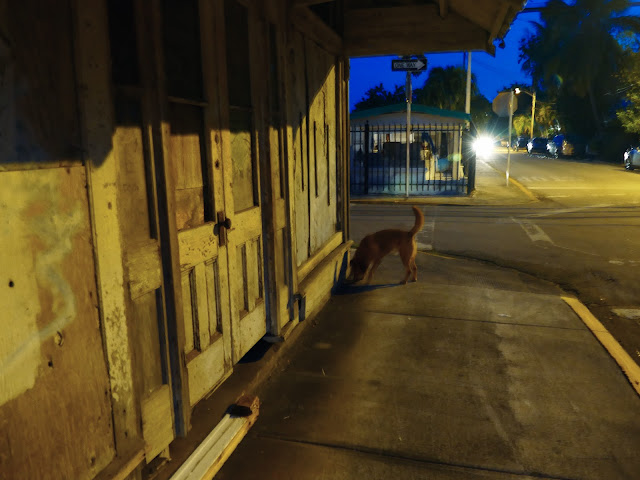 I stood around seeing what I could try with the new camera and without Rusty's cooperation.  He darted off to smell things. 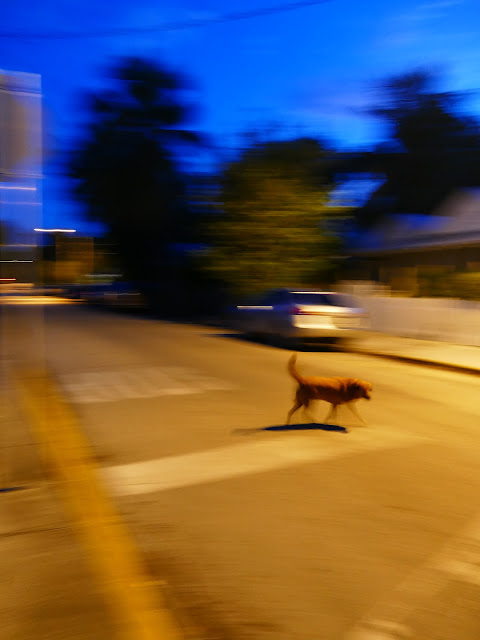 Learning to customize the white balance took a bit of practice and some pictures ended up with rather more exotic lighting than I first intended. Rusty was somewhat impatient and as he had to be back in the car in forty minutes when I went to broga I sympathized with his impatience. 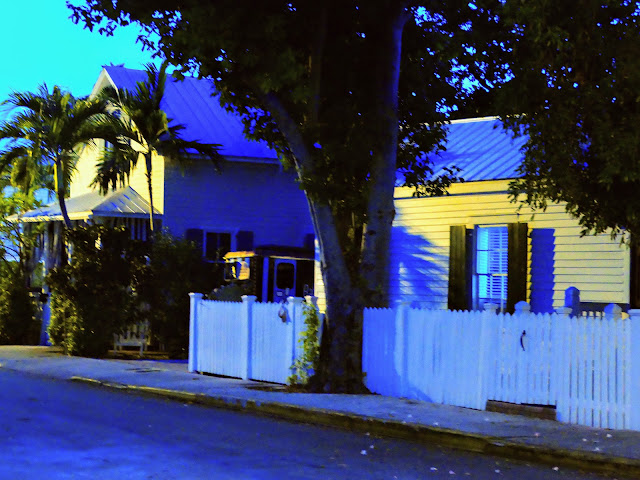 Key West has been living through a series of weekend summer events, seafood and mango celebrations, Hemingway Days and so forth as the city stays busy during the less tourist part of the year. Weekends still see tons of traffic coming down the highway but things have quieted down a bit. 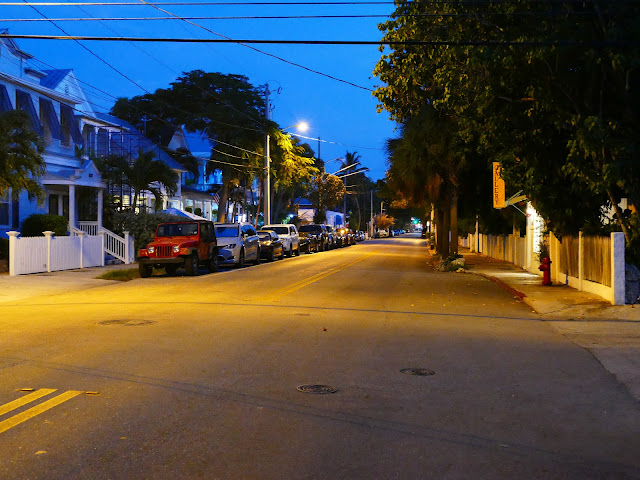 And temperatures have heated up quite a bit too. Everyone is moaning about the stifling heat and outdoor work seems particularly rough at the moment. But it is still the time of year when empty second homes get their makeovers. 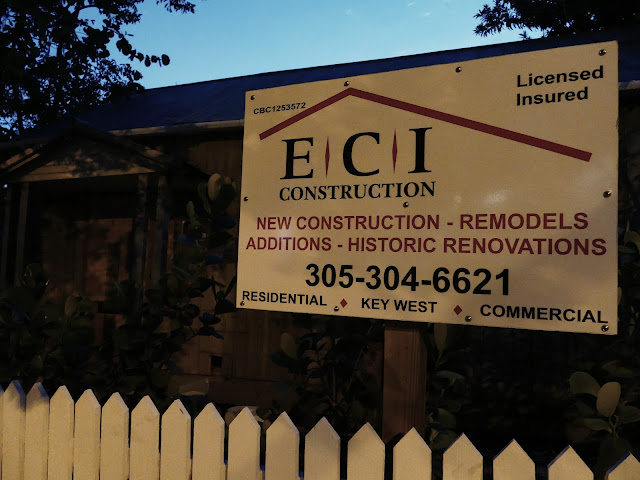 There is a storm brewing in the Caribbean, which as it is July is not exactly news but memories of Hurricane Irma ( and Wilma and Andrew and Georges and on and on) all crowd in as we watch the little crosses and circles from and dissipate on the National Hurricane Center map. 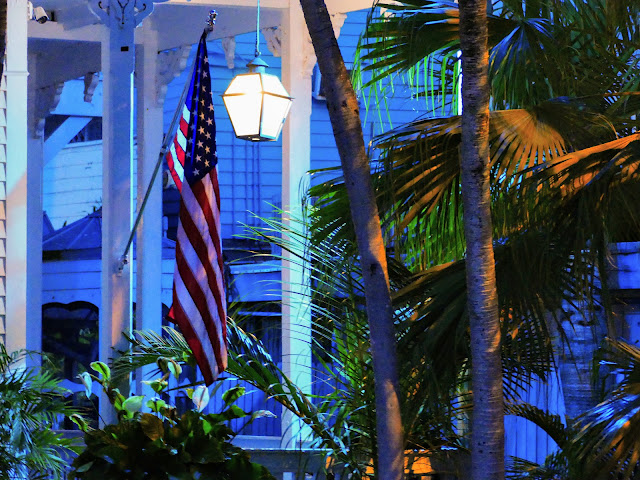 There have been a surprising string of afternoon thunderstorms this year, almost as though this were the west coast of Florida where afternoon downpours are an almost daily feature with lightning and all the fireworks. Rusty has not been enjoying the noise which has been imitating the huge thunderheads Up North. 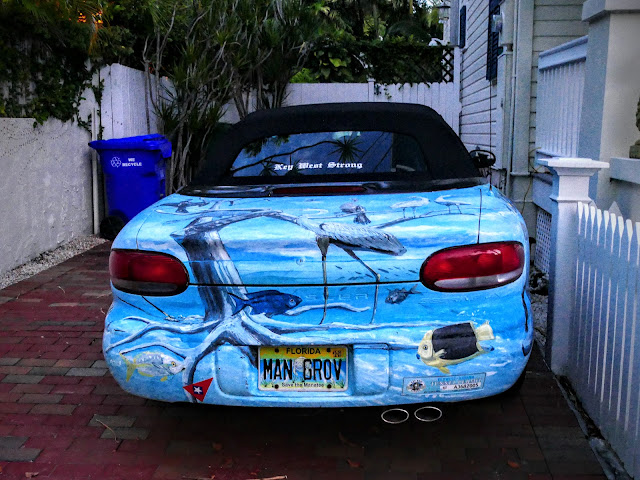 Key West keeps on keeping on. A city founded in 1828 has been through quite a lot of weather, not to mention fire but all that was not enough to end the city's existence. Bankruptcy nearly did it in the Great Depression but tourism arrived just in time to save it. 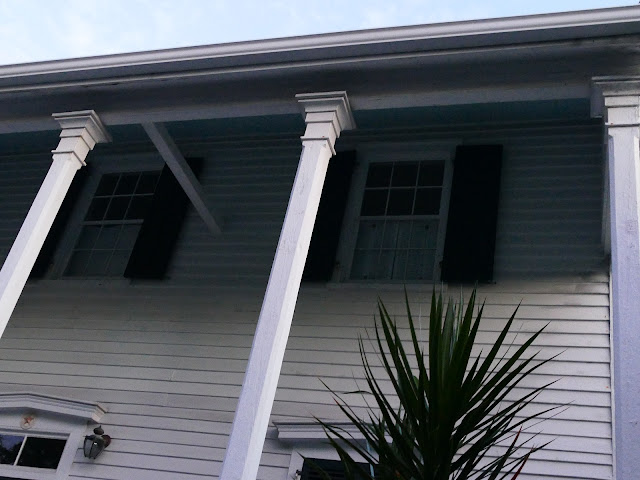 Me? I'm saving myself on the mat at Broga, one exercise at a  time. Losing the use of your legs is a huge incentive once you start to get them back. 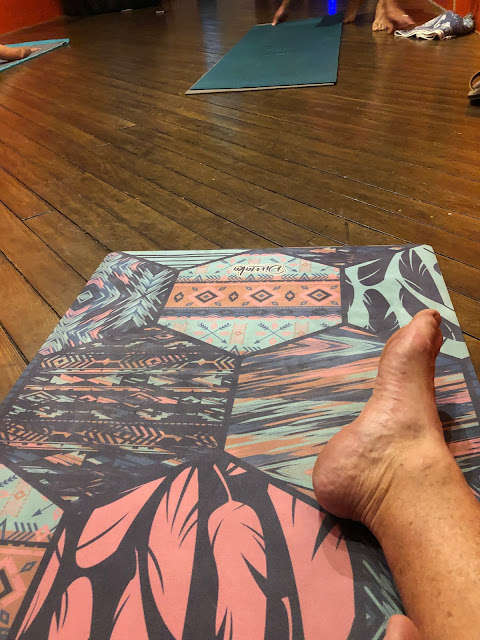