It's not Kitty Hawk but it is a view of the beach at Anastasia State Park on the barrier island protecting St Augustine. We had our handy annual State Parks Pass and we used it to get in, and though tame Labradors aren't allowed on the beach we took a stroll on a boardwalk to check out what we don't get to see at home, and that is a magnificent sandy strand. 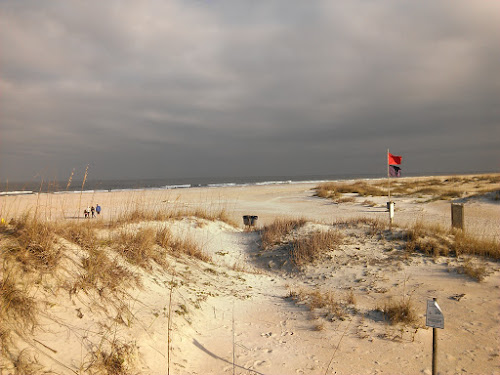 A cold front was passing overhead, strong north winds blowing thick black clouds south, leaving blue skes and weak sunshine to the north. On the cusp of this line stood a man in a broad brimmed hat holding a piece of string. 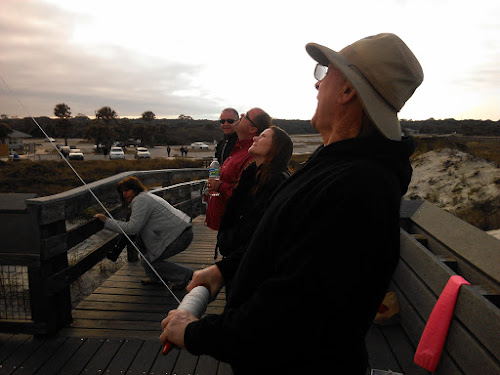 He said the Fat Albert overhead was twelve feet across, wing tip to wing tip and in the following fifteen minutes I learned more about flying a kite than even the movie The Kite Runner could teach. He couldn't stop talking so my wife snuggled below the fence line out of the wind and I gave up seeking escape and listened to the flood of heavily accented words. 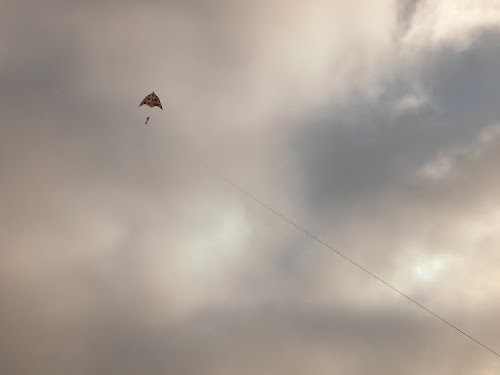 he was from Lynchburg Virginia and retired a shad subsequent to retirement given up flying model planes as they don't travel well in his twenty six floor RV, kites it is then, and they provide an excellent upper body work out and an opportunity for hours of meditation. 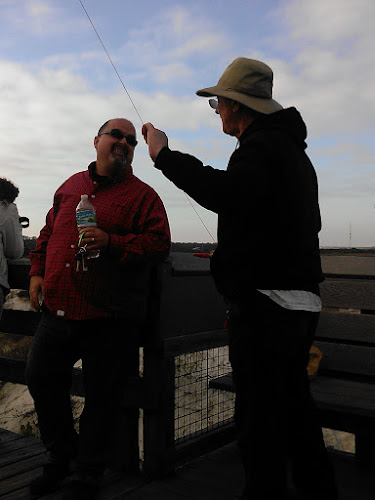 We got onto politics and where I know nothing about kites, politics I do. He said he had never paid attention in the past so I guess his newfound enthusiasm gave him instant expertise, but he did like to think young people today can't do what he did at their age. I supposed his grandchildren were the exception of course, the always are, but laziness and. Competence stalk the land apparently. 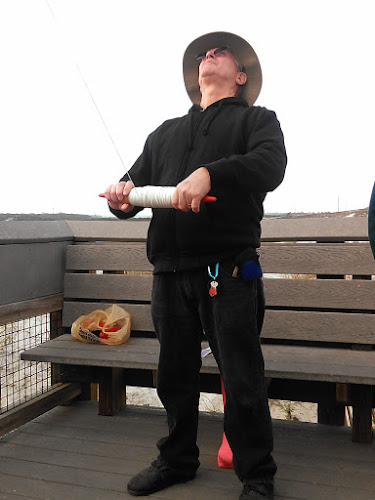 When he laid into Affordable Health Care I asked how Medicare was working for him. Funnily enough "free" government run health care seems to work fine for the formerly hard working members of the self reliance generation. I listened and let him carry on, kites, politics or grandchildren he obviously felt a strong need for one way communication and who was I try to dam the flow? 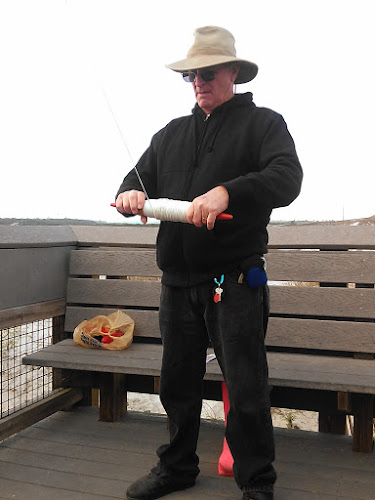 Such was the flow I never did get to ask his name but if you check the first few pictures you will see the next group of captive audience who fell into his circle and the kite talk started again from the top as we slipped away. 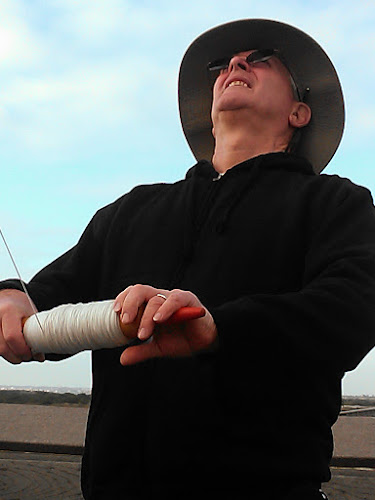 One is supposed to nurture eself wit encounters of this type but it didn't do much for me. I wanted him to be thoughtful, a life lived in shades of gray, informed by nuance. Instead he was a mass of clichés, not party political but of the sort that sees all politicians as liars, all kids as lazy and all gardeners as illegal. It's an easy view of the world from a man who looked startled by the idea of driving to Mexico, who preferred to be surrounded by the familiar. That was fifteen minutes of my life I'll never get back. 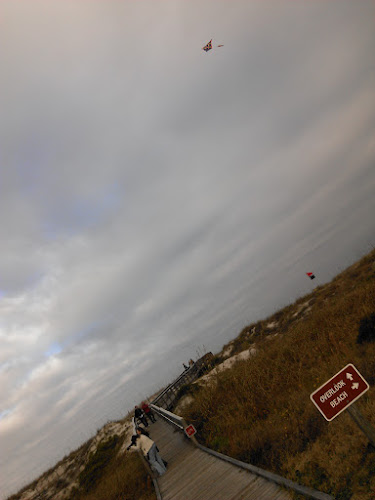 Cheyenne got her reward later, after a long walk in the woods and a short walk through a parking lot. 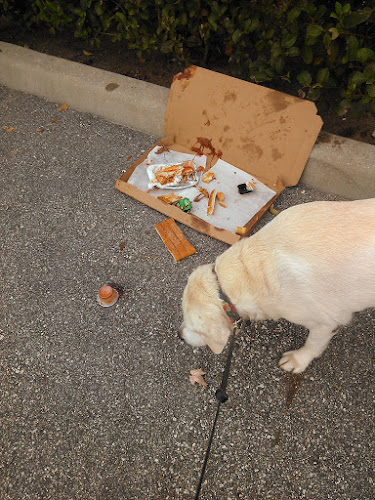 On the way home we stopped at Flakowitz in Boynton Beach for lunch, chopped liver (ugh!) for my Jewish wife and egg salad for the goy at the table washed down with endless coffee as we cranked up for the last four hours home. At the next table I noticed some people have figured out how to avoid conversation altogether: 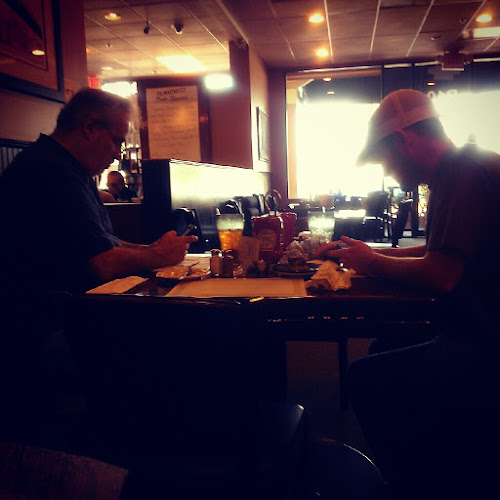 During the drive my wife slept and I had time to think. I came to one conclusion, a cliché of my own, as we pulled up under the tree house we call home. 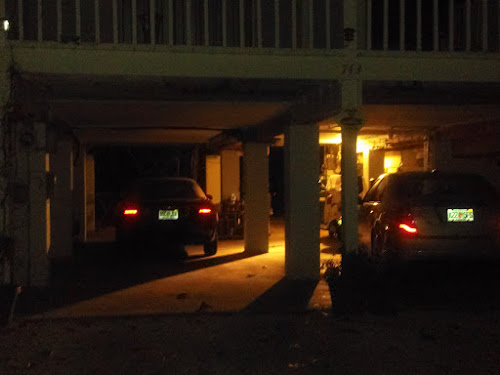 The more I see people, the more I like dogs. 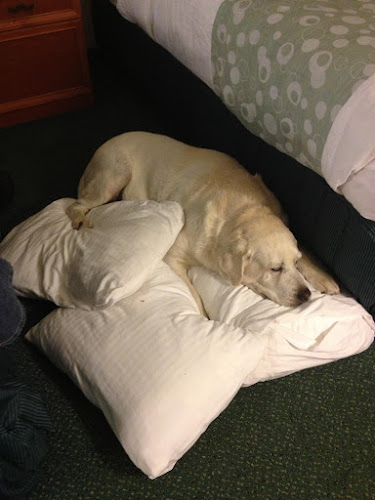