I took Cheyenne to work on my short shift this week and after four hours of sitting up and noticing Spring Break seems to be over, thank heavens, I got to take the Labrador on an early morning walk in town which she liked a lot. 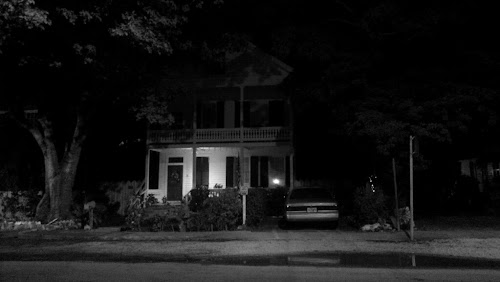 However I managed to forget that the sun wouldn't be up for more than a hour so we ended up walking in darkness which was die actually. We were alone most of the way and Cheyenne is so well behaved I let her amble on the sidewalk as she pleased. First stop was the Minor Basilica of St Mary Star of the Sea whose Lenten Mass schedule struck me as impenetrably complicated. Monday through Friday you got two shots at hearing Mass but Monday through Saturday you only get one? Or is it three? Cheyenne couldn't even read the sign so she was no help. We moved on. 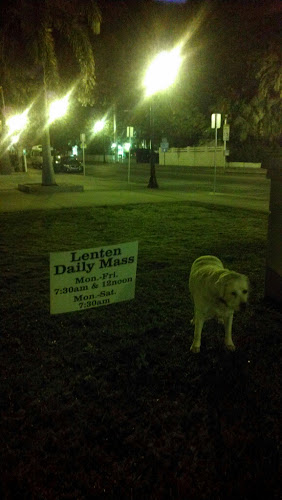 My cunning plan was to wander north on Windsor, cruise past the cemetery in the dark and make a short circuit on a lane and head back to the car with time to spare to pick up a coffee at Sandys before stopping at Publix to do some light grocery shopping. Then home to bed. Brilliant, except Cheyenne had other plans. 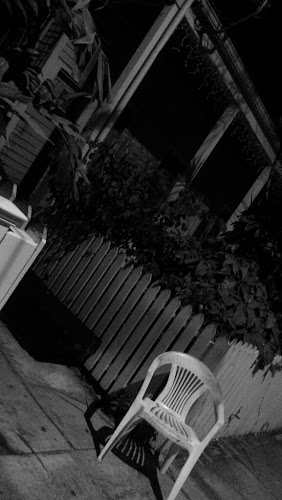 Cheyenne took a left on Truman Avenue and started heading inbound with me trotting along behind. I worked to keep her out of the Minor Basilica's property as The One True Faith in my experience isn't too fond of animals on sacred ground. I wanted to cruise over and check out the illuminated grotto but with my Yellow Labrador in tow that wasn't possible. The grotto supposedly keeps hurricanes at bay so I don't doubt I'll check it out again this summer. 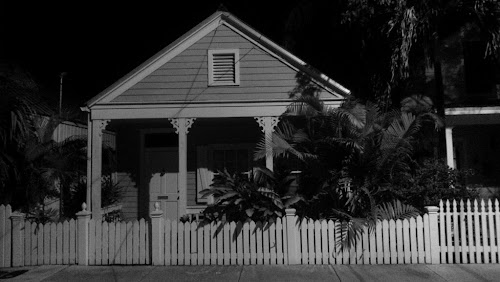 Following my busy dog we happily turned off Truman, the main thoroughfare and plunged into the shady darkness of Elizabeth Street, a gently sloping street that passes Solares Hill, the highest point in town, between fourteen and sixteen feet above sea level depending who you ask. 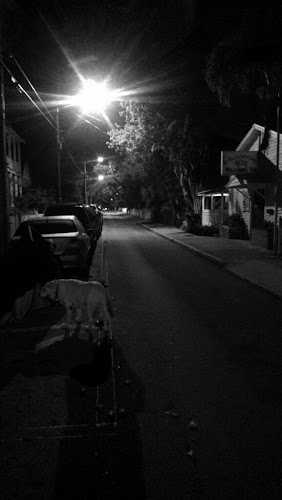 I enjoy playing with my Android camera though I find the settings quite fiddly. However I do like the black and white effects especially after dark. Above we see Elizabeth looking north toward Solares Hill and below in color the opposite direction from the area of Petronia Street. You can freewheel a bicycle down here with care and concentration. 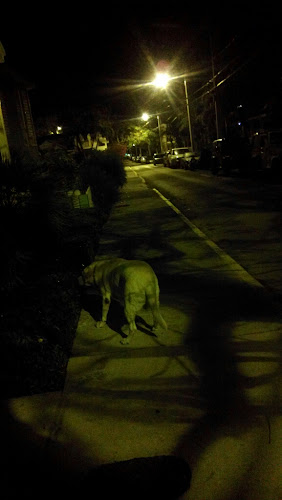 Angela Street ends at Elizabeth between these two large imposing homes. The furthest house is being massively rebuilt, while the nearest house has bowls of cat food and water on the sidewalk which requires some deft dog control when we get close by. You can see Cheyenne aiming for her free breakfast already. 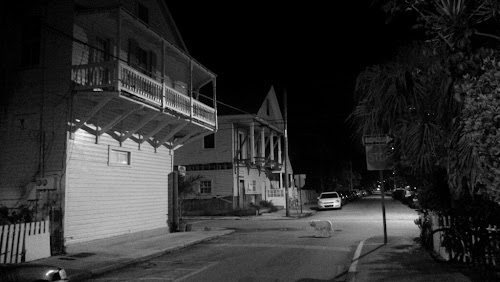 I very much enjoy walking the streets of Key West after dark especially after the bars close (at 4am at the latest by law) but before the good working burghers of the city are up and about making noise and commotion. This is the time when the silent, light- free cyclists are home and the drunks have passed out and all you can see indoors from time to time is some night owl staring at a small screen or caught up reading a book. This time of year the night air is cool and there are lots of open windows and doors which give the silent streets a strange intimacy. It's almost like tip toeing Invisible through people's lives. 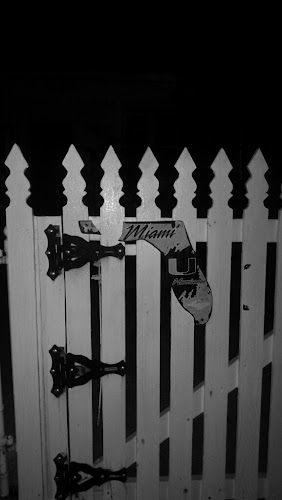 I especially like the architecture at night, the shadows lend a certain mystery, along with the silence, no voices no engines no footsteps. And then you ask yourself why a sports pennant matters that much, but I suppose one has to make concessions to modern fads, so because one lives in an attractive older home. I'd prefer the gate without the pennant but I am a sporting philistine. 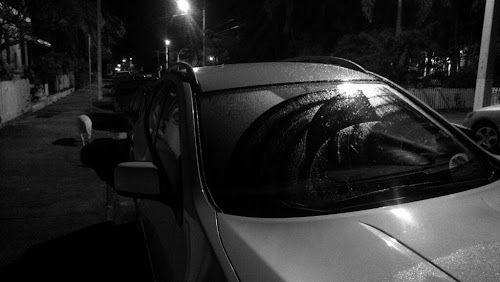 It's been damp in the morning, my motorcycle seat is like a swimming pool most days when I leave work, but I'm tough. 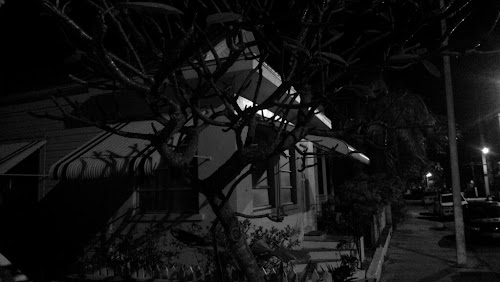 I'm never quite sure what my plants are supposed to be doing and my frangipani has been looking pretty dead but in fact I found this one, pictured above and it looks equally dormant so I am reassured. I am child free religion free sports free and botany free. Some days you just feel useless. 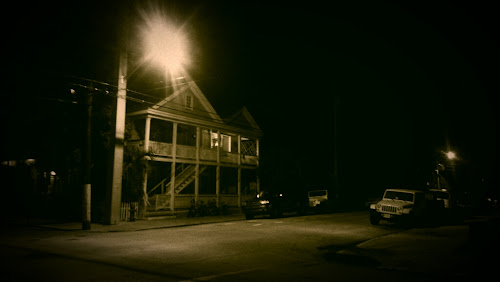 Half way across town on Elizabeth following my intrepid exploring hound I started to wonder where Marlene Dietrich was; or more properly Lili Marleen leaning up against a lamp post waiting for her soldier. All I had was my shadow and my dog's shadow combined as one shadow. And then I found a bomb, or was it a tank pretending mighty unsuccessfully to be a scooter. 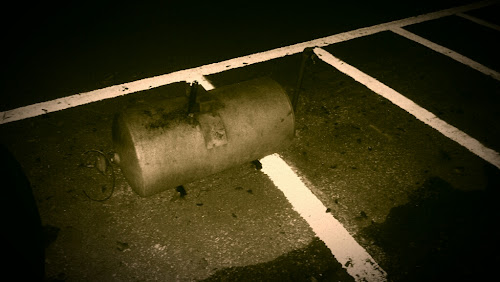 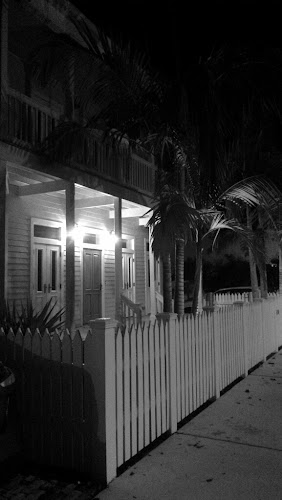 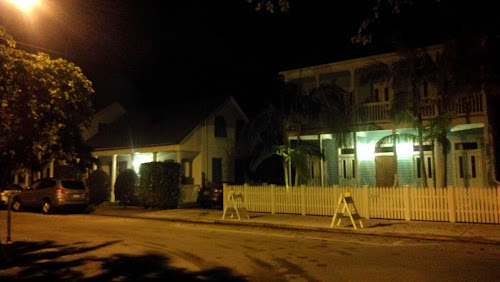 I took a color picture further along, highlighting the whites and blues but in the end I figured the monochrome picture looked better. 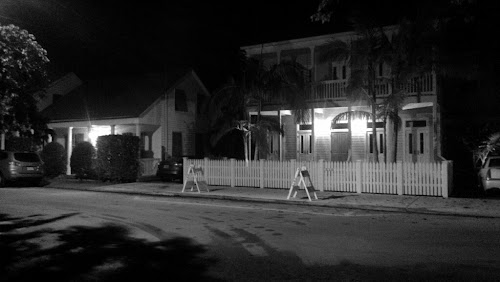 The Hilltop laundry boasts a pretty colorful tropical botanical scene on its walls. Still better in the stark black and white I thought. Besides Cheyenne was picking up speed on the (relatively) steep downhill section of Elizabeth heading toward Caroline Street. This part is decidedly easy to freewheel on a bicycle. 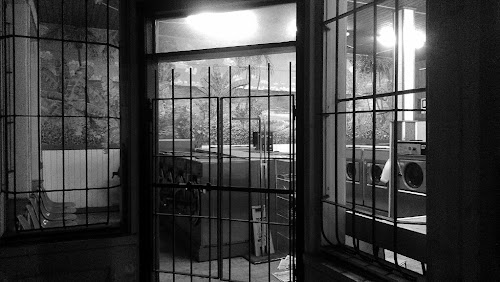 She got ahead of me as usual, but never too far. While I fiddled with the camera getting the scooters backlit she stopped and waited more or less patiently for me to catch up. Good girl. 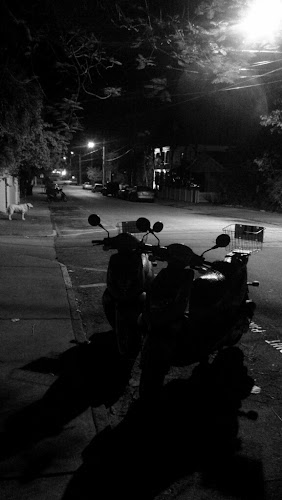 Oh yeah, this is Key West where not everyone can hold their liquor. This guy stank like a distillery, and snored like a locomotive tackling a steep grade. It looked horribly uncomfortable to me sleeping curled up on a brick step with a reeking cup of alcohol still under his nose, but he was blissfully unaware. I nudged him with my foot and it turned out it was Jack Riepe on a private visit to Key West looking for his long lost BMW. 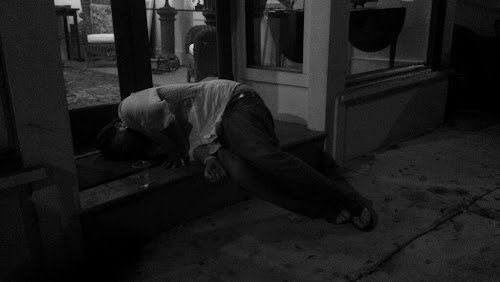 The walk was drawing to a close, we had reached our furthest point, Harpoon Harry's on Caroline Street where the bright lights and open doors had yet to attract their first customer. I was tempted but happily for my waistline my wallet was in my car. We marched back across the city on Margaret Street, still with hardly anyone but a couple of fearful dog walkers haring the sidewalks with us. I saw nervous nellies tugging leashes and waiting for the royal procession to pass by, Cheyenne in front, by now also leashed owing to the number of cars rushing to work, and me striding along behind. God forbid two actual dogs should cross paths. 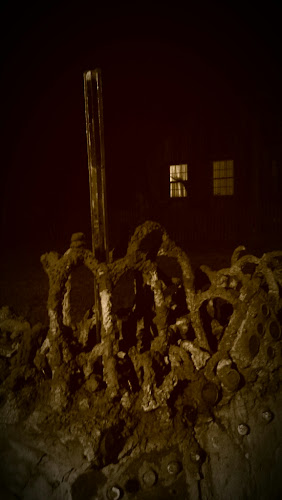 A glance at the mirror wall (née bottle wall) at the late Carolyn Fuller's house and we were steering a course past the cemetery back to Windosr Lane and the car. The sun was coming up by now backlighting the trees across the cemetery, blue skies with a hint of orange where the sun was about to rise. We had places to go and food to buy.

Posted with Blogsy
Posted by Conchscooter at 3:58 AM 7 comments: