The Things I See In Key West

The re-elected mayor of Key West is in hot water for his plans announced without much of a by-your-leave to build a homeless rehab facility on Stock Island, on the northern half of the island previously annexed by the city. It's not a real popular plan not least with the homeowners on the golf course nearby and a swath of city residents who argue that a 24 hour center for the homeless will not solve the problem and may just make it worse. Worse than this? 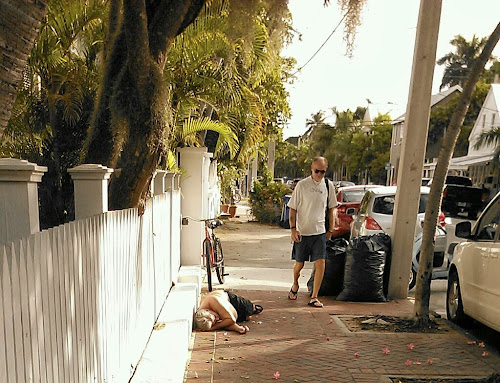 I continue to be astounded by the numbers of people who drink themselves insensible night after night on city streets. Not all of them are residentially challenged but they sure don't hold back when it comes to quaffing cheap alcohol. While the bigwigs argue about the size of cruise ships the streets present this spectacle to paying tourists. Let me tell you the police are doing what is permitted night after night, taking names, arresting and moving along. What the real solution is I don't know but shooting down proposals like the mayor's isn't the path to productive discussion. The city has had a falling out with Reverend Braddock one of the leading homeless activists and his expertise seems to have been sidelined. I can't imagine how that helps. 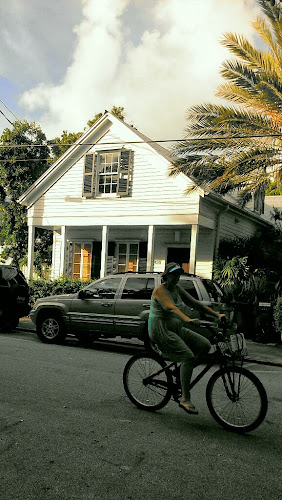 Meanwhile we all muddle along. It's not all homeless and cruise ships in town. Life goes on as usual and this time of year is lovely with time and space for those that live here, or visit and appreciate quiet times. What better than local freshly baked pastries for breakfast, to go... 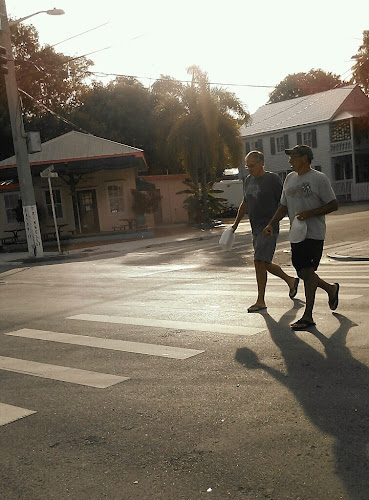 Hydration is all the rage and this couple luckily had a plastic recyclable bottle of filtered tap water bough at great expense to keep them from expiring on the hot city streets. They were at least one block from Harpoon Harry's and the New Market (Maun's) where refreshment is sometimes available as rumor has it. And non alcoholic too. I learned when living on a boat that water is terribly heavy so perhaps I am simply justifying my laziness. 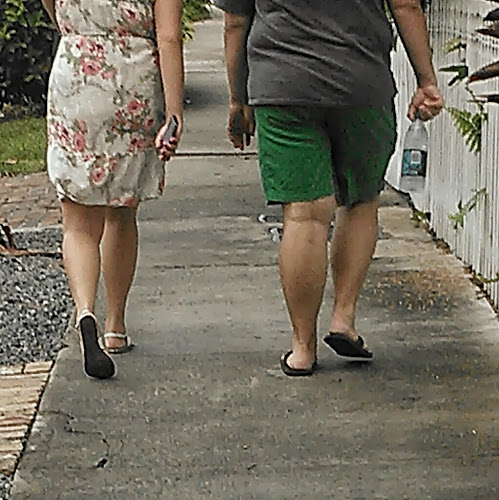 I make it through an entire walk without so much as a sip of water. I astonish myself. This dude in the picture below went a long way to surprising me too. It's illegal finally to text and drive in Florida, as of the first of the month, so he couldn't have been texting but he crawled up Fleming onto White Street at ten miles per hour (giving me the opportunity to take the next picture below as he dawdled after a red light went green) then suddenly he got galvanized and started racing down White Street as though a firecracker had gone off up his fundament. Then at the light in front of Sandy's he flicked a cigarette butt into the street. His pest control company had the green seal of Eco-awareness on the back or some such nonsense. Irony where is they sting? 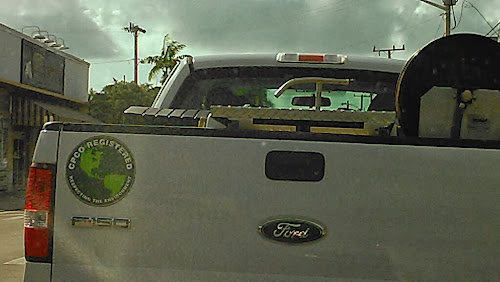 I really liked the 15 minute parking zone in front of the dentist's office. I've never had a fifteen minute appointment at Doctor Claude's office on South Street. Even to clean my teeth takes half an hour. 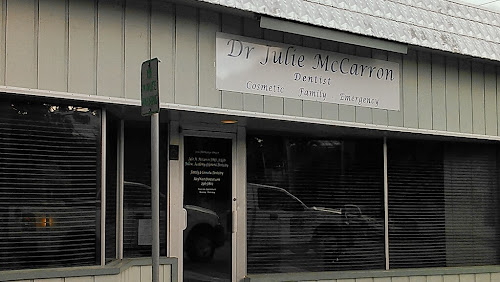 Someone got quite enthusiastic already about my birthday tomorrow. If anyone would like to swap a Halloween birthday with me let me know how we can do it and I am ready to get through All Hallow's Eve with absolutely no celebration at all. My wife is promising cup cakes from the shop in Marathon near where she works. I asked for pineapple upside down cake and she groaned I always want the most complicated cakes, so my evil plan to get cupcakes worked. Might as well get something for turning fifty six. 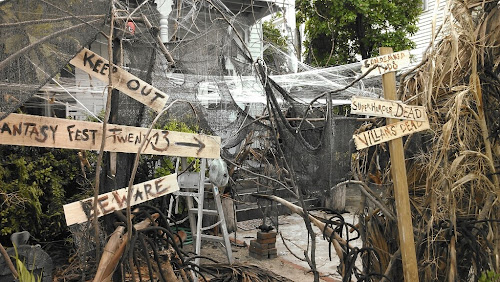 I keep seeing these painted faces around Key West. They were a sensation for a time but like everything in Key West they ended up being rather evanescent though the weather can't wipe their remains out completely. Cheyenne was not at all fascinated by the decal. 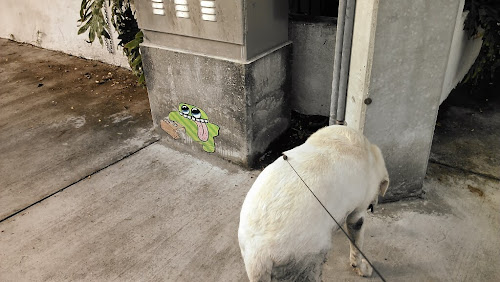 This weird loading dock next to Finnegan's Wake has been abandoned for ages, as long as I can remember which may not technically be an age but it has sat there like this for a very long time. Suddenly it looked like construction was about to happen. Not so fast! There's fencing in front of it but here it sits as always: 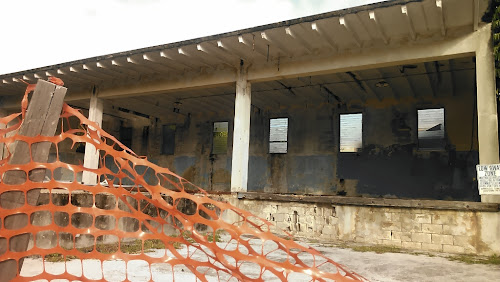 The Boulevard has been turned into two way traffic to help out the struggling businesses along its length, and the relief for all side and alternative streets has been enormous. Meanwhile plans are afoot to beautify Caroline Street where Pritam Singh is preparing to build a fancy new hotel behind the old West Marine store, and that building will require planters and bike paths and all that sort of urban renewal. Flooding certainly is a problem, seen here in front of Pepe's Cafe. 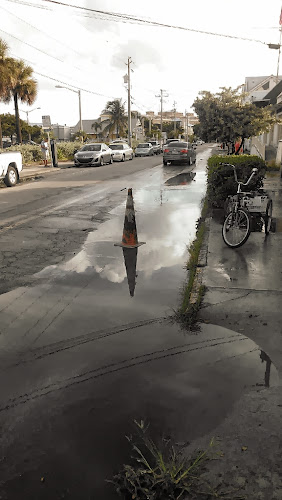 As much as government gets blamed for all the ills of the Western world business manages not to get too worked up sometimes about the details. A new gutter perhaps? 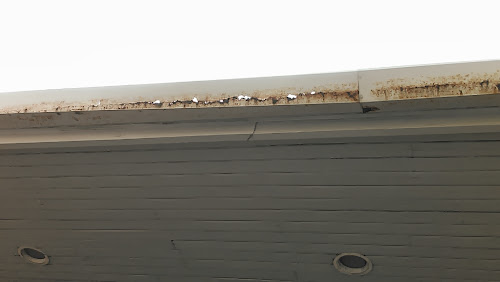 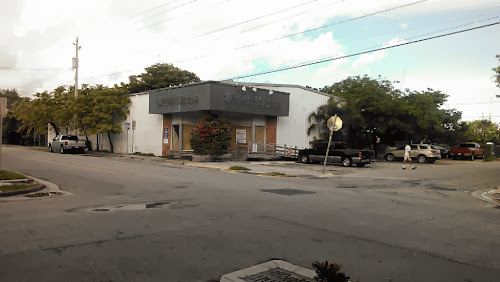 ...and here is the new boater's supermarket stretching from the corner of Grinnell Street. I think the building is quite attractive with its built in sliding hurricane shutters in a natty shade of blue. 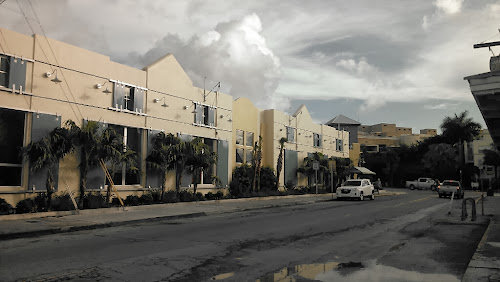 And then of course there is a huge segment of Key West voters who told the people in charge that enough is enough and dredging is off he table. The city commission is telling the Feds to back off, the people don't want change, and they mean to hold their leaders accountable. Oddly enough many of the city commissioners supported the dredging study while their voters told them no by 75 to 25 percent. 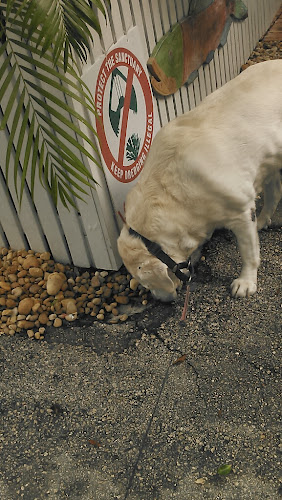 I wonder if they will pay attention over the long term to the will of the people in this small corner of a tone deaf country?