It puzzles me how my neighbors seem to not notice odd things about how our lives are ordered for us. I wonder how it is Canadians can flood Key West in winter, driving expensive cars, owning or renting homes in some of the most expensive dirt in Florida, and yet they live in a world we cannot afford. To hear the Republicans tell it, Medicare for all would bankrupt the US, like being bankrupted for blowing up Iraq and Afghanistan was a good deal, yet Canadians can afford the dreaded "socialized health care." How does that work? Note they get to live pretty well and if they get cancer they don't bankrupt their families? Or organize bake sales to make a pathetic gesture toward their uninsured neighbors? They aren't clamoring to be forced into the private insurance racket. Weird huh? 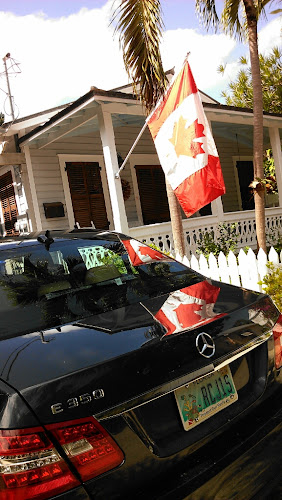 This sticker, Slow Down This Ain't The Mainland doesn't do much for me, not least because this part of the world isn't really laid back. The saying originated on Maui where people they say really do live at a slower pace. In the Keys the umbilical cord that connects Key West to Miami generates a mainland attitude. When I'm stuck in traffic on Highway One dawdling behind vacationers enjoying the views I wonder how cool they'd be if they dialed 911 and got a recorded message telling them we'd be answering 911 when we got to work. Try that on for laid back when you get a sudden urgent need for an ambulance or a cop...the other thing I find is that the so-called laid back drivers blow a fuse when you pass them. They don't slow down, pull over and let the worker bees get a move on. No they speed up when you try to pass them and they are about as laid back as a bunch of hornets whose nest just got poked with a stick. 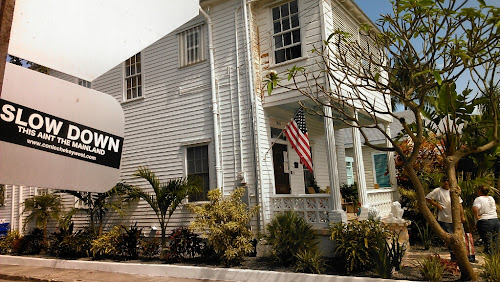 I saw this splendid bonsai and because I was in an enquiring mood I wondered how it is I kill anything I try to grow. And if I don't kill it an iguana will. I tried to keep a bonsai once. It died. 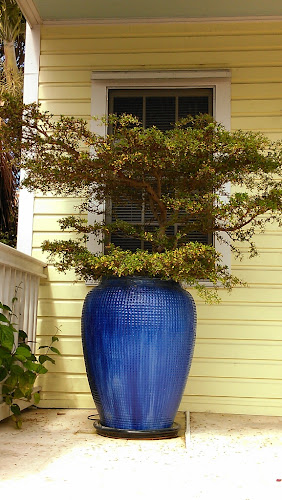 I've photographed these penguins before but it's been a while and they are still cute. They decorate a gate in the meadows. 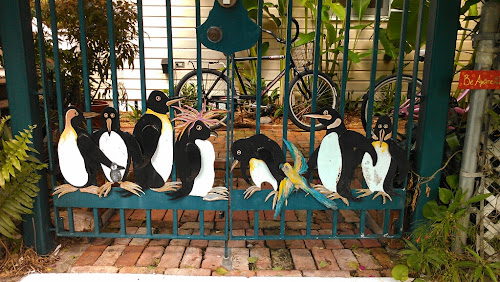 I really liked these two bicycles. I am not sure if I should admire people who ride color coordinated bicycles or if I should shrug them off because sooner or later they will get stolen or wrecked or something and all that work...call it envy. In the end I am about as useless at landscaping as I am at coordinating my life's accessories. Rust and heavy use is my style. 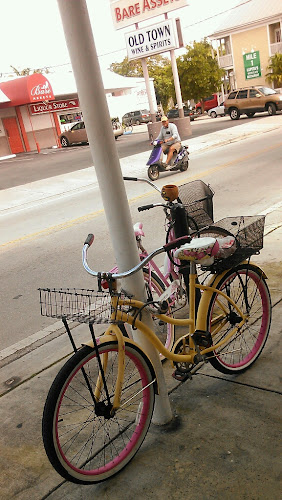 Here we go, a Key West pick up. If you can stand the crowding and the noise and the dreadful quality of most of the housing you too can live by bicycle and something like this will become your model T runabout. 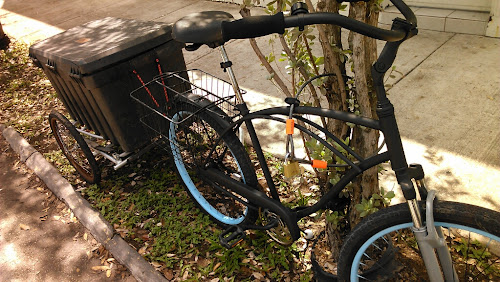 I drove by the college on day with sunshine and high wispy clouds. I spent six years on and off studying marine bits and pieces in that building. It's supposed to get rebuilt as. A new super modern facility. Idiotically I have a lot of nostalgia for the desperately hot classes of Fall - September in the lab was desperately muggy fiddling with grease and nuts and bolts your feet boiling in protective boots. Yet we had fun. 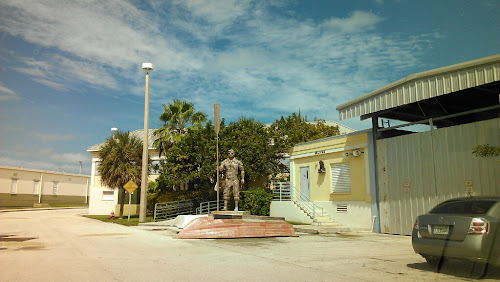 It's life lived in the fast lane, kind of, not on the mainland.