From The Archives: January 2010, A Reminder Of Winter

Summer Returns
My wife sent me this picture from her iPhone when she went to visit family in Rock Island Illinois. She wasn't happy to hear me tell of a sunny and warm weekend in Key West while she was gone. 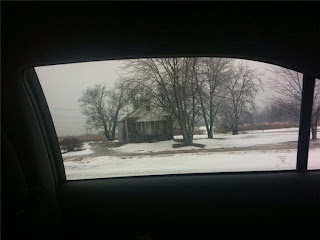 It's that time of year, when people from Up North abandon their factories and farms (...farms?) and come south to spend their retirement monies in sunny Key West. 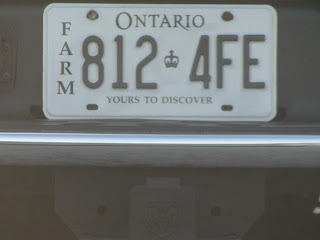 This is what they come to see and do, wear summer dresses in January and ride motor scooters in America's quaintest town. 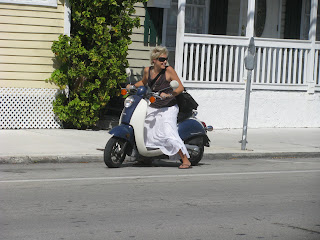 They get serenaded by more or less competent buskers on Duval Street: 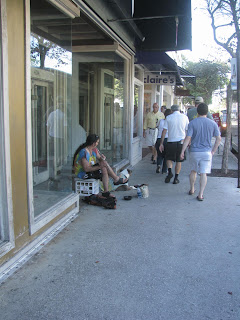 Or they buy palm frond art from Michael, busy at his spot in front of La Concha Hotel: 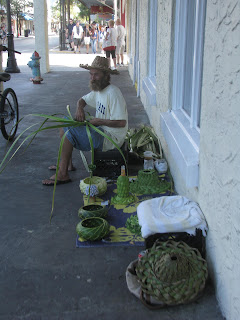 People needing to apply some color to their knees can check out the menus in front of the restaurants: 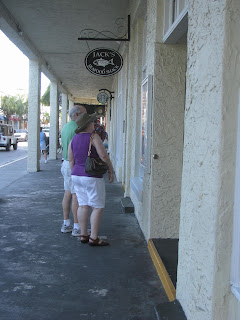 I have no idea what this lot were up to but they looked...uh...picturesque? 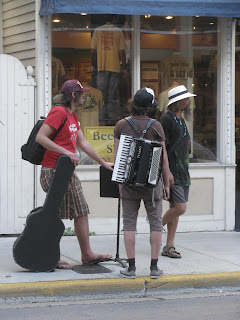 Some people bring the whole family to do some light shopping on Duval: 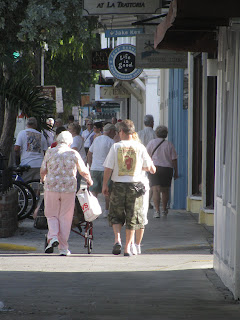 Some people come to restore their faith in the value of romance: 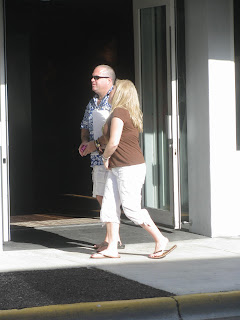 And most people like to put their toes at risk in sandals. At least these two weren't riding along dragging their feet. 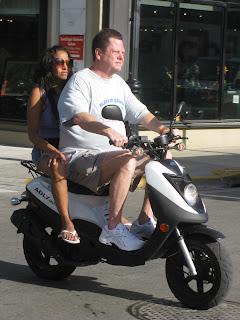 I was slightly surprised to notice this man wearing substantial footwear on Duval. Then I realized he was riding that overpowered cruiser known as the Yamaha V-Max and probably needs all the help he can get to keep that beast under control: 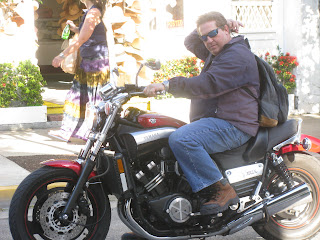 Self control is a lost art in 21st century America, and while I agree 84 degrees (29C) is on the warm side I am firmly of the belief you should come as you are as the Tourism Development Council pens the slogan for the Keys, but have the good sense to cover up on main street USA. 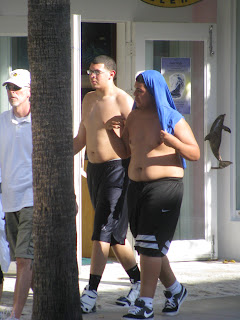 Or cool off rather than flaunt your gut. I prefer the locally produced Flamingo Crossing Ice Cream, if anyone cares. 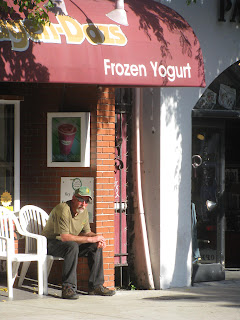 Here's a new one, new to me at least: 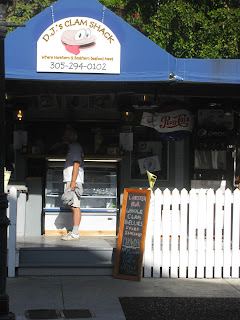 A flash of thigh for those in the Northern Hemisphere snowed in for months to come: 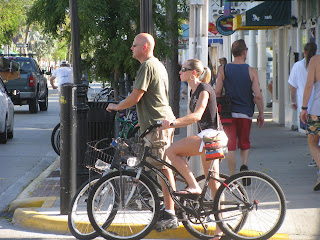 I had no idea you could buy knives like these on Duval Street. 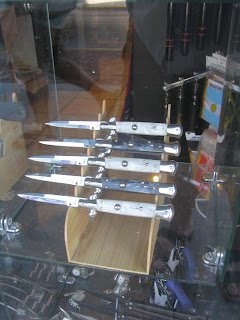 Drinkers at Mangoes were so overheated they needed a fan to stay cool in the outdoor bar. Chicago this ain't, not in January at any rate: Friday afternoon on Duval Street was like an informal contest to see who could show the most summer skin: 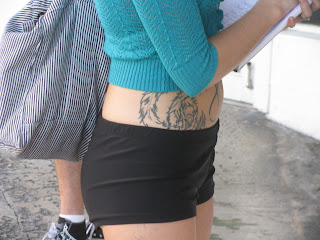 These two on bicycles were a study in confusion. They had helmets, like good little snowbirds, but perhaps they had been in town too long because they wore cloth headgear and stored the safety helmets on their bicycles. No, I don't know why they were taking their helmets for a tour. 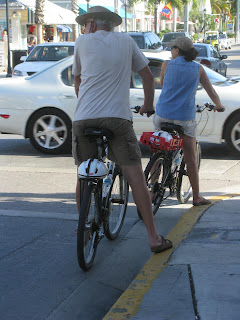 A glance down a side street towards Bahama Village showed a bright summer afternoon street scene: 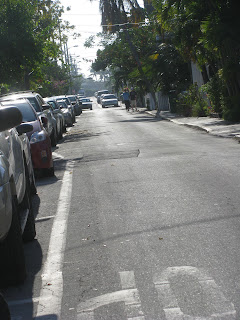 This sidewalk artist, with suitable northern pallor was comfortable in the shade and intent on his work: 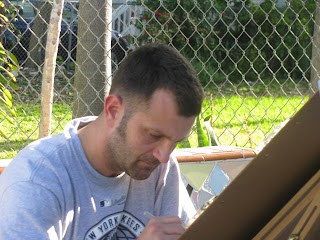 I think this place used to be a coffee shop, but it is now called, whatever it was before, Cork and Stogiewhich cuts through all the crap, I guess. These patrons don't look like they miss tea and coffee. 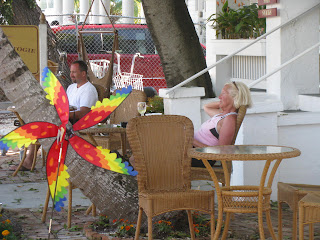 I found this chair going begging, sitting in the middle of the street somewhere off Duval: 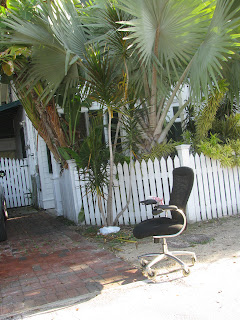 This dude was looking extremely cool on a hot afternoon in front of Johnson's Grocery Store: 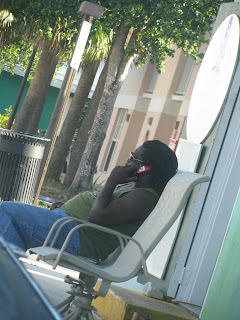 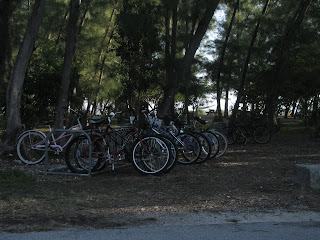 See, walking around half naked at the beach seems reasonable enough to me. I'd like to think they were all dressed when they were shopping at Fast Buck Freddie's, whose shopping bags they carried. 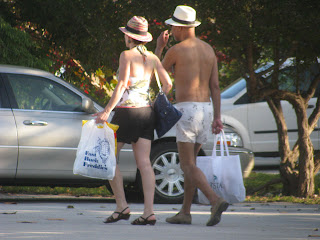 I liked this picture of a walk in a meadow of an August afternoon. 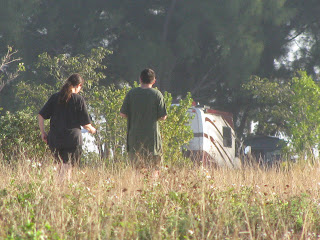 Actually they were two visitors to Fort Zachary in January. Ah, Key West.
Posted by Conchscooter at 12:01 AM

Singing to Jeffrey's Tune said...
I thought corsets where the self control in 19th century.

I just recently watched "The Key West Picture Show" from 1977. The people in the film are a far cry from today, especially with the line "Key Westerners are physically fit people, with year round temperatures of ..."

Singing to Jeffrey's Tune said...
Now that I think about it, the film said, "Key Westerners". I suspect the dudes with the shirts off in the picture could be tourists.
Monday, January 25, 2010 at 9:05:00 AM EST

AHH, the benefits of warm sunshine in a tropical environment during the winter months is Just . . bliss. I smile as I view your photos and wished that I were there

It would appear that the weather has turned in Key West, just in time for the latest tourist influx cash infusion. I am pleased to see that two-wheeled transportation has again boomed with temperatures in the mid-80's.

I am not surprised to discover that Ontario is actually a giant farm, but was slightly disappointed that the "Meg Ryan" look-a-like on the scooter photo did not enlarge. (I will be the second person in history to tour Key West in full boots too.)

There is no greater food for the soul than clams on the half-shell, or the Ipswich clam, steamed to perfection. Yet I thought these were a cold water thing. Kindly investigate and check out the menu in this joint. Now that I am seriously in training for my ride to Key West, I would like you to explore great BYOB fish restaurants.

Your photo entitled "a flash of thigh" shows the reticence beaten into you at a British boarding school. Bobskoot knows how to take much better pictures pictures of this nature, and who to dedicate them too.

I'm glad the recent cold scare is behind you.

Conchscooter said...
jeffrey:the key west picture show is shown at the tropic every staurday morning. I will go sometime soon. I don't remember key west from 1981 that fondly but I was young and wanted the big ciyty lights of california.
bobskoot: if you were here you'd have to fend for yourself in this bootstrap capitalist world we grovel in. It isn't as easy as it looks.
riepe:This is the level of invective I get when i try to be nice and offer relief from winter's tedium. Tomorrow the not-a-review of Franco's deli. That should produce fireworks.I suppose I am now going to ahve to taste clams on Duval. That sounds weird.
Monday, January 25, 2010 at 7:32:00 PM EST

Rob said...
I do miss the weather down there. Southern California is currently in full blown winter mode after a week of storms and my once a year keys fix that I get when I visit the folks on Cudjoe has worn off.

By the way, your snowbirds with their helmets protecting their rear wheels most likely rode from Trumbo Point, which as with all military installations, requires bicyclists to sport the proper dome protection...that is until they squeek past the gate, then all bets (and helmets) are off.
Tuesday, January 26, 2010 at 12:59:00 AM EST

Conchscooter said...
I used to hate winters in Santa Cruz, when the rain falls just as the weathe rturns cold.
And I'll bet you're right about the cyclists. They make motorcyclists wear jackets and boots as well as gloves and helmets.
We had a military guy fall off his Vespa in the city and crack his head open some time ago. I understood his widow got no death benefits because he wasn't following protective clothing regulations. And all he did was take a curb badly and fell over at a gas station.
Tuesday, January 26, 2010 at 1:09:00 AM EST

Adrianna said...
Seeing these pictures makes me despise Tennessee so much more. How did I end up here? Growing up in Key West I can never tell you why I was in a rush to leave.
Wednesday, January 27, 2010 at 10:21:00 PM EST