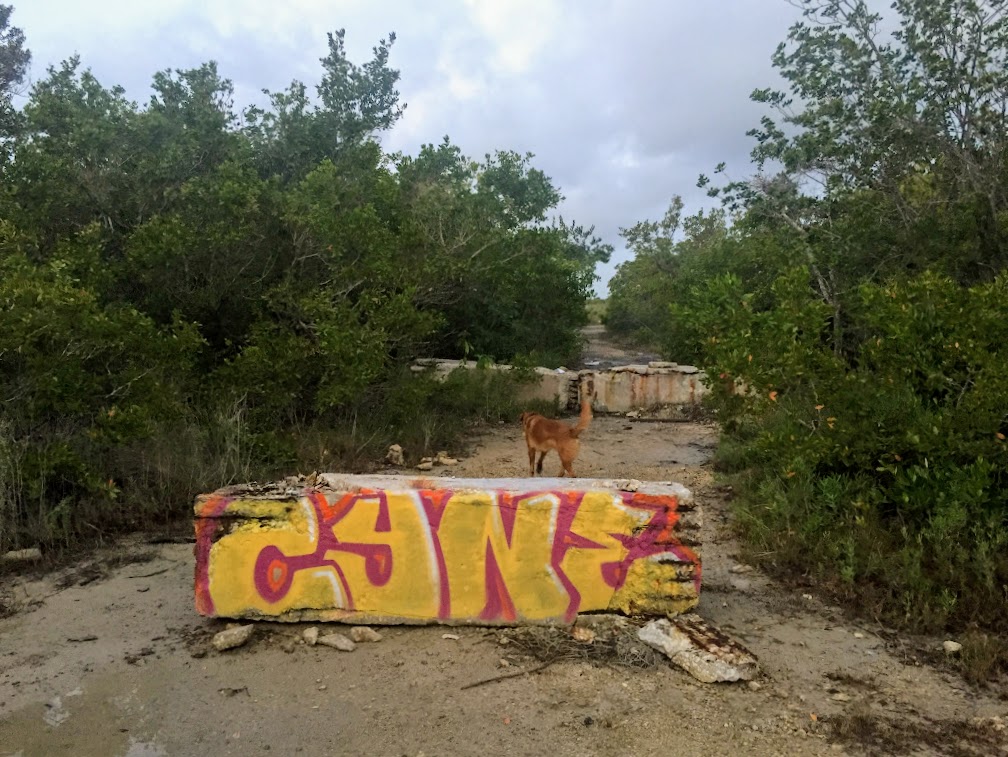 I have seen the graffiti all over the Lower Keys and in Key West since about 2015. I made  a half hearted Internet search with no results (he has a private Instagram account for friends apparently) and resigned myself to never knowing who the author of these weird pointless letters might be. CYNE painted or printed with the additional slogan underneath: "southernmost wanted." 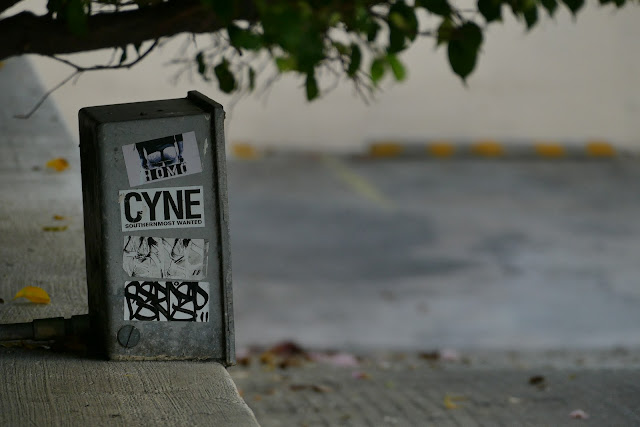 But it turns out these signs are bound to start disappearing. And most likely not coming back. Why? 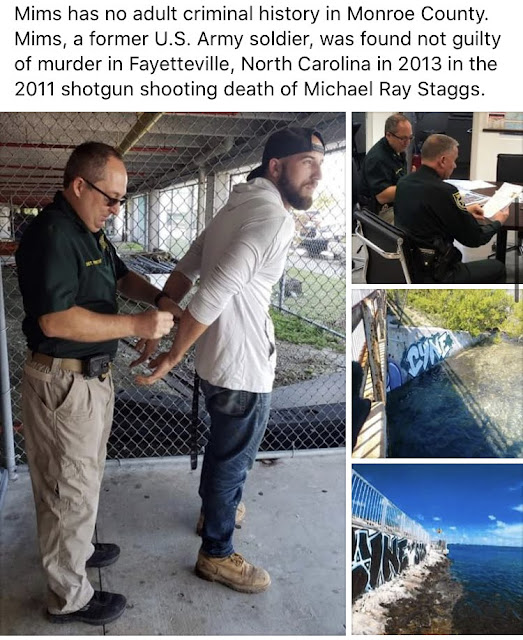 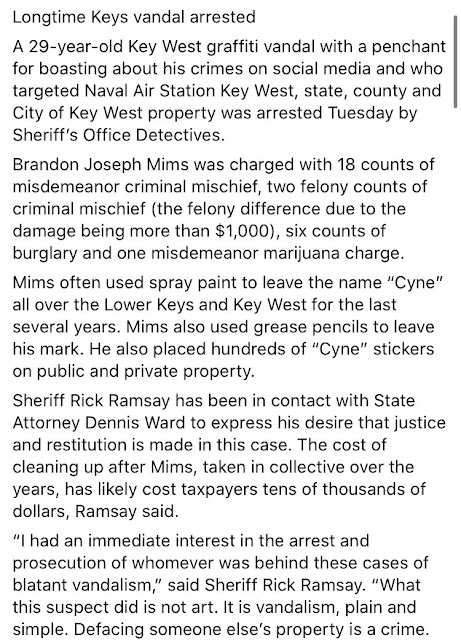 Southernmost Wanted has a checkered and thus quite interesting  past, especially in light of the fact his crime in the Keys has been spraying uninspired graffiti and sticking small stickers on public spaces. In the past he was more inclined to violence it has been alleged. In the story below from the Fayetteville Observer one clause leaped out at me: "one of the odder homicides" in the community according to the author of this well written report. I reproduce an extract here. The link above has the entire story, well worth a read as it makes chilling reading.

Former Fort Bragg soldier Brandon Mims was found not guilty Tuesday morning of murdering Michael Ray Staggs in a parking lot outside a Chinese restaurant in Fayetteville two years ago.
According to Staggs’ family, the jurors thought it was likely that Mims killed Staggs, but that they lacked enough evidence to vote to convict him.
Prosecutors had circumstantial evidence that indicated Mims could have been the shooter, but no direct evidence - such as video recordings or positive identification from witnesses - that he was the person who fired a shotgun into Staggs’ car.
“I feel comfortable that with the evidence that we had before us and that was admissible that we put on the best case that we could put on,” lead prosecutor Nitza Rothstein said in an interview Tuesday afternoon.
Defense lawyer Dee W. Bray could not be reached for comment Tuesday. Mims could not be reached.
The case was one of the odder homicides in Fayetteville, seemingly random.
Michael Ray Staggs’ father, Mike Anthony Staggs, said it was a “stranger on stranger” killing, that his son did not know Mims and there was no known connection between them.
The younger Staggs was shot in the head Jan. 29, 2011, as he sat in his car in the parking lot of the Compare Foods shopping center on Bonanza Drive and Morganton Road.
Rothstein and co-counsel Scott Gainer were able to present these facts to the jury:
Mims had a burgundy Ford F-150 pickup. Witnesses observed a flash and loud bang from a burgundy Ford F-150 parked next to Staggs’ car, then saw the pickup drive away.
Mims was seen in the Chinese restaurant and shopping center parking lot shortly before the murder, and the restaurant had a debit card receipt of Mims’ roommate, who had given the card to Mims that evening to buy cigarettes.
Mims’ grandfather gave police Mims’ shotgun, which investigators say was of the type that fired the shotgun pellets that killed Staggs. There was gunshot residue in the window area of Mims’ truck.
“To me they proved the case,” Mike Staggs said.
But Rothstein and Gainer could not put Mims’ grandfather on the stand. He died last year. Had he lived, Mike Staggs said, Mims’ grandfather could have testified that, on the morning after the slaying, Mims brought him the shotgun and admitted that he shot Michael Ray Staggs.
Once again I find myself feeling relief that I live in a town where murders are so rare they don't get a rating. We get lots of calls in police dispatch from anxious relatives across the country who haven't heard from family members who come to key West on vacation or for business. Check the advertising and you might get the impression that if you come to Key West you should drink yourself insensible after you have met a whole bunch of boozy new wonderful friends.  Under the circumstances it might seem obvious that your friends and relatives are going to "forget to call." However that thoughtlessness strikes you, rest assured if they are engaging in drunken stupidity they may spend too much money and they may soil their reputations but this is not a town of violence. We don't have unusually interesting murders and I am very grateful for that. We do have a lot of drunken stupidity and helmet-less scooter riders with severe head injuries. And now the Sheriff has locked up an alleged killer. But he got locked up for graffiti, not murder which makes this arrest interesting to me. Are we witnessing the calming effect of the Keys? 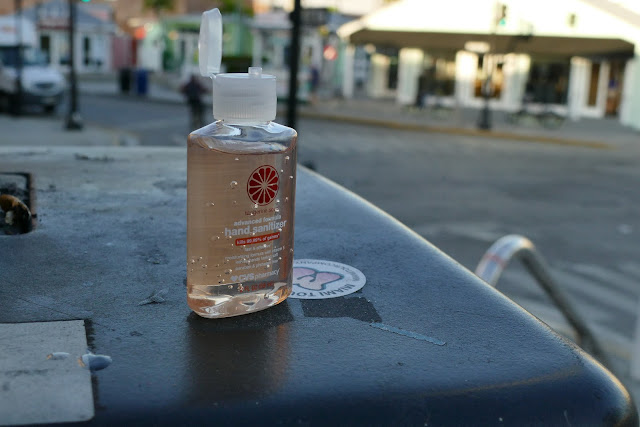 So why did I post a picture of a banal bottle of antiseptic soap, two dollars at CVS I discovered upon investigation. This story will I hope counterpoint the CYNE arrest with a description of the true crime scenario in Key West. I paused in my walk with Rusty to sit on a  brick wall and study the new business about to be built where Rum Barrel used to be, a bar opened by a pirate obsessed, media savvy doctor who wanted to sell food and drink for profit in Key West, and did very well parlaying his fame as a sports doctor to top flight sports figures I believe. The permit notice in the bar window says the city will be considering granting an easement to make legal what is apparently an illegal taking of city sidewalk. The brick ramp below has been incorporated into the architecture of the building apparently without a permit and now the usurpation of the public sidewalk is to be made properly legal. Bad enough you might think that a public sidewalk has been used illegally - there's a crime of key West proportions. 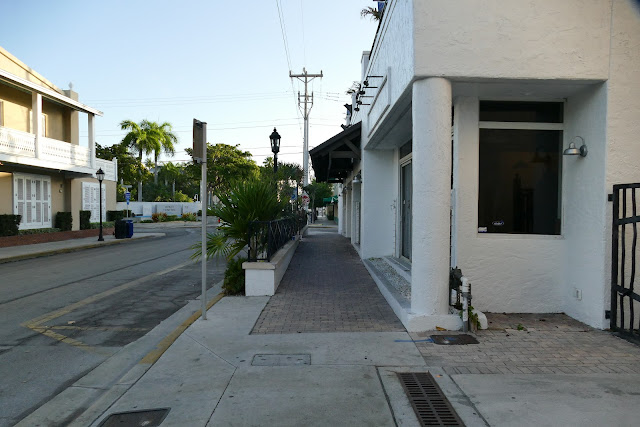 So, the question of the soap...read on if you have the stomach. As we resumed our walk I noticed a certain odor hanging about my person so I scrupulously checked the soles of my shoes. It wasn't dog shit either it was pungent and human and wherever it was it wasn't on my shoes. I raised my camera to take a picture and the smell became intense. I looked at my hand and the tell tale brown smears were everywhere and unmistakable. I recoiled in horror and started frantically checking my short tails and shorts to see how far the plague had spread. Happily it was only on my one hand -only - and I staggered down Front Street like a leper holding out a diseased limb. I spotted a hose and managed to squeeze a few drops from the spout with my clean hand but that did nothing except increase my sense of panic. 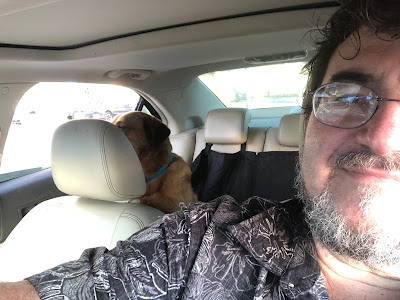 I am not germ-phobic, quite the opposite, but I do know that shit actually does carry disease and anyone who takes a  shit  on a brick wall is probably not the healthiest of specimens at the best of times so I was looking at my hand with half a mind to cut it off. The inspiration struck. I was staggering down the street pondering y options when I saw the pharmacy, one of half a dozen in Key West and for as often as I have been critical of all the chain pharmacies springing up all over town I approached the front doors with a  profound sense of gratitude. It took a while but I have become reconciled to the misfortune and now I think I can safely say my hand and I are friends again and I no longer look at the palm worrying that nasty brown smears will reappear and fill my face with that ever so nasty smell. Human not canine. I pick up after my dog so I know. 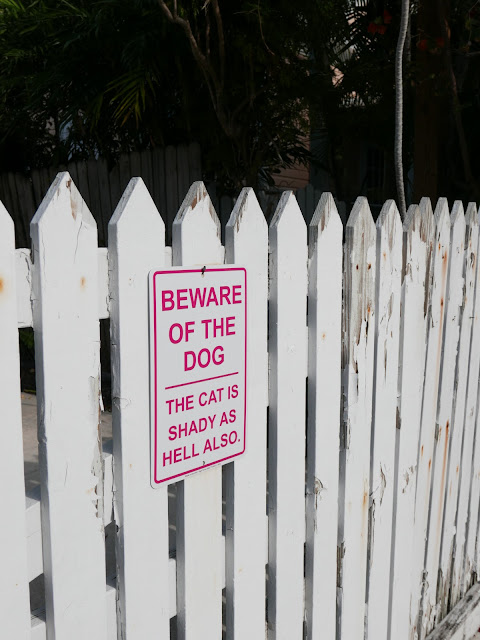 Murder? I felt like murdering whoever put me in that predicament but this is Key West and I contented myself with sending them a mental curse and clutching my bottle of hand sanitizer close to my chest for the next unfortunate encounter bound to happen in a town filled with residentially challenged visitors and several weeks of winter to wait out in the tropics.
Posted by Conchscooter at 12:00 AM No comments: