I see this house in Old Town near Elgin Lane all the time and I never quite get over the fishing float decor. What I like in particular is the absence of any other overt decorative effects. Just the floats, thank you,  contrasting with the plain gray house. 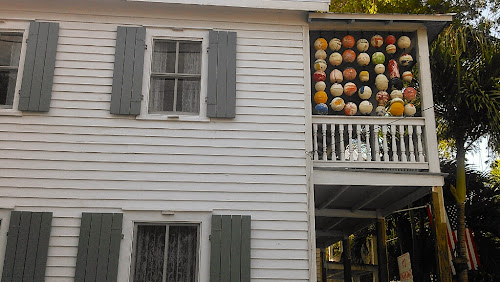 I have pointed out that Cheyenne likes to hunt and chase smells and seeks out anything remotely edible. I figure it's her time to walk and stretch her mind so as long as she doesn't make a mess or tear up a trash can I am pretty easy going about that. She is just a dog after all. Well, count me disappointed when she walked right past some of the most delicious trash I've seen in a while. Ripe mangoes rotting off the tree... had they not been squashed into the road I would have scooped them up. On that note my very  public thanks to Robert who doesn't like mangoes and keeps dropping off his excellent crop at my house. My own mangoes aren't yet ripe but I keep an eye on them. 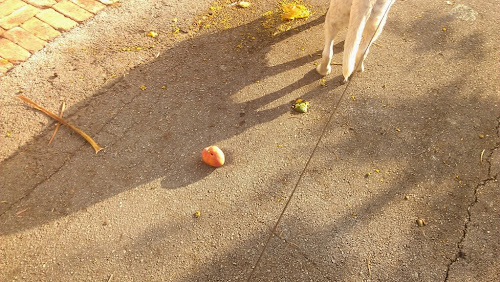 This house in the picture below is condemned according to a notice on the front, and it astonishes me how there are so many abandoned foreclosures around this town where housing is scarce and thus expensive. Perhaps that expense is what prevents these homes from being brought back into use. 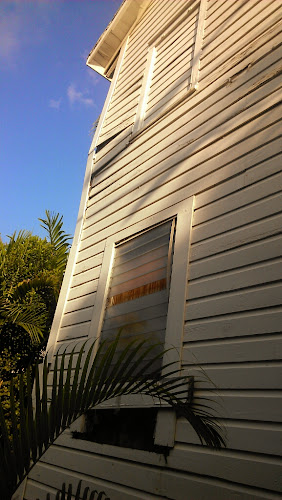 Key West early in the day is a time of rest as the sun slowly rises. People are absent, the morning air is cool and fresh and the streets, lovely as ever, hold the promise of a new day and all that has to offer. 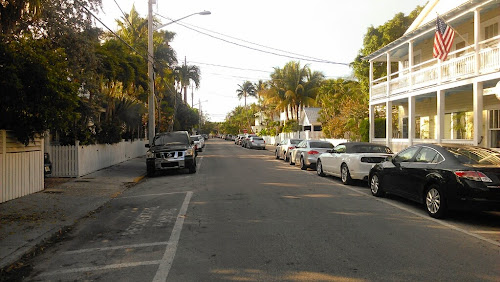 Unless you are a cat, which means every day and every moment of every day can be yours to own. Unless a dog ambles by. 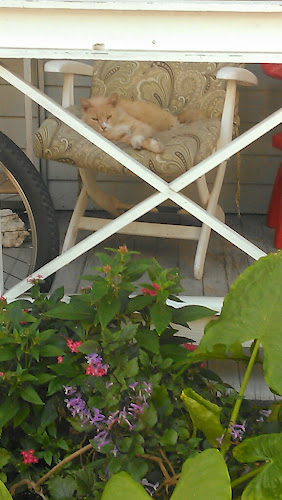 This welcoming sign on some innocent straight person's gate has provoked much hilarity among my gay friends. "Of course!" Noel told me giggling like a school girl "That's  always true!". I don't think that's what the nice Chinese artisans meant when they made this souvenir "dust catcher." 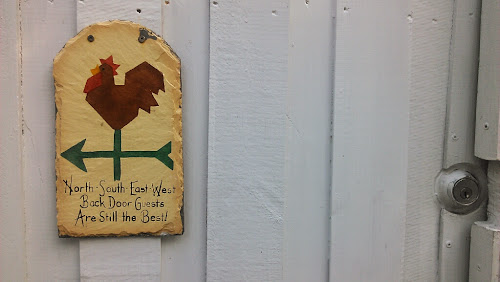 This town is positively overrun with lazy lounging cats. 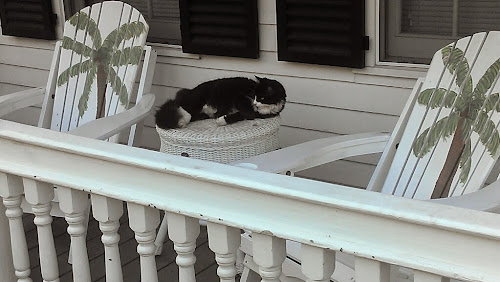 This tag on a scooter I have seen previously but this time, within weeks of my vacation on Ocracoke it brought back memories for me. While it is true that there were actual real pirates on Ocracoke (unlike Key West where piracy is a tourist myth) I'm not sure that is the salient feature of that Outer Banks village. 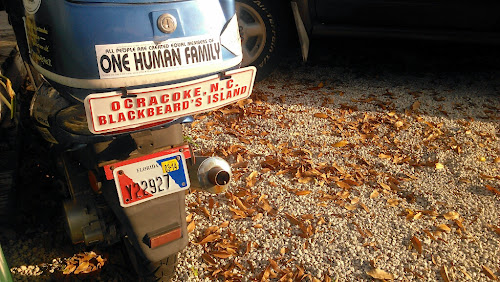 I liked the peace and quiet and the immediate isolation of Ocracoke. Honestly though a short ferry ride puts mainland USA much closer to Ocracoke than does the endless miles of US Highway One followed by a day long drive across Florida...Isolation is relative. Ocracoke is  closer to the Smithsonian Institution in the District of Columbia than Key West is to Orlando's Magic Mouse. Make of that what you will. 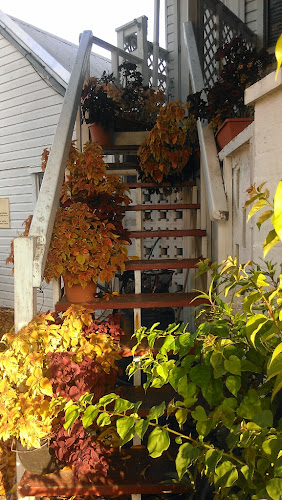 ﻿
Key West manages to retain a charming 19th century air, thanks to the small old homes, the narrow streets and a  slightly decrepit air that stands in contrast to the frenetic forced neatness of modern suburban America. And this is in a full service city in modern America. 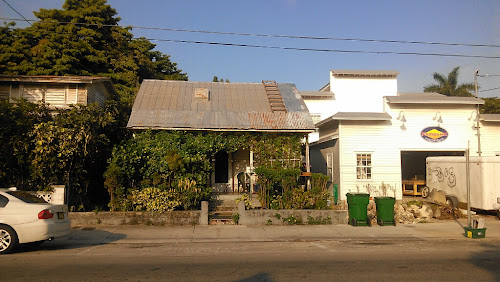 This is a view of the entrance to Peary Court named for the famed Navy Arctic explorer whose direct descendant is a judge in this community. The courts have ruled that his former navy housing continues to get a tax break if the rented homes are occupied by military personnel. It's amazing that Balfour Beatty gets this tax break at vast expense to Monroe County taxpayers. And on top of that the military says they won't reveal which homes are occupied by the military for reasons of "national security."  This kind of crap in a country shredded by malfeasance and financial scandal and unlawful shenanigans by the one percent does not bode well for our future as a superpower and world leader. It feels like the decline and fall of the Roman Empire, where TV substitutes for circuses to distract the populace from the crimes of the elites and the oligarchy. 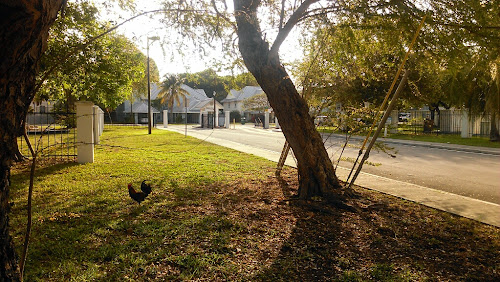 The 19th century military cemetery is not dog friendly which is hardly surprising as they tell us dogs have no souls and I know lots of dog owners ignore their dogs crapping. My dog leads me into the crap as she likes to sniff where other dogs have been and where she knows where to put her paws I tend to step in it. 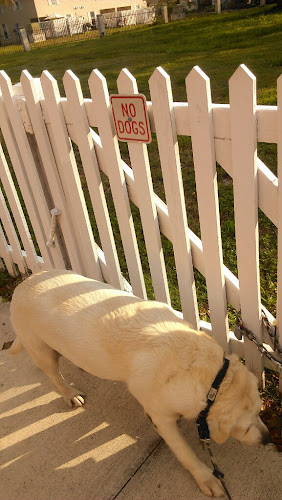 I saw this delightful front yard, neat as mine will never be, a page torn from a glossy magazine and I wondered whose idea it was to put in the rather odd sculpture at the far end, three silver hoops looking a bit like a discombobulated bike rack. I go for the all natural look, whether because I am lazy or because I like the artistic gene I prefer not to speculate. 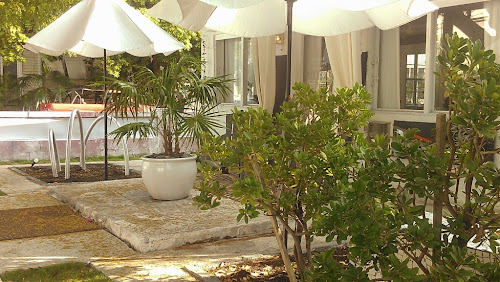 I very much enjoyed talking to the paw of this sweet gentle retriever. Cheyenne was pretty standoffish as usual. 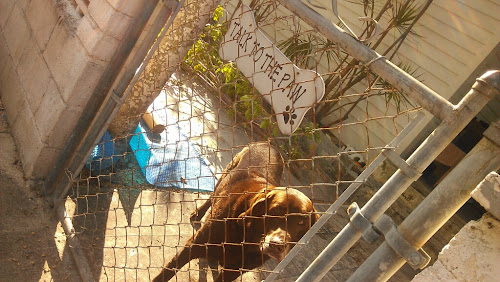 "Go Conchs" is a sign often seen in New Town yards. The High School baseball tournaments are closely followed and generate all sorts of comments in the newspaper about sportsmanship and lack thereof. High drama I prefer to ignore. It's not a fight you want to get in the kiddle of when Conchs disagree with each other. Parents have come to blows watching their kids playing sports! 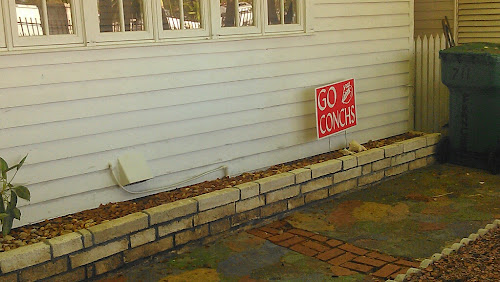 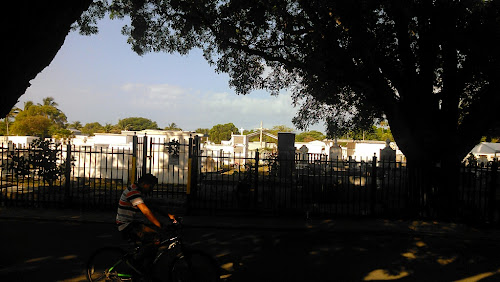 She is a resident in my book: 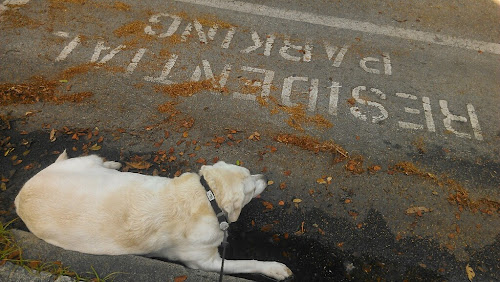 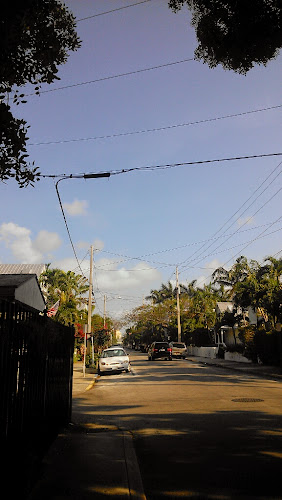 I very much like walking the streets of Key West.