To take off with Rusty on a week long trip grew in mind to become an event worth anticipating. My wife said that as my summer had been interrupted by her gall bladder I deserved a week off in the mountains while she was working. I squeezed in a week before winter descended on western North Carolina. There was some mention of a motorcycle trip but to me a week of wooded hikes with Rusty sounded just the job. 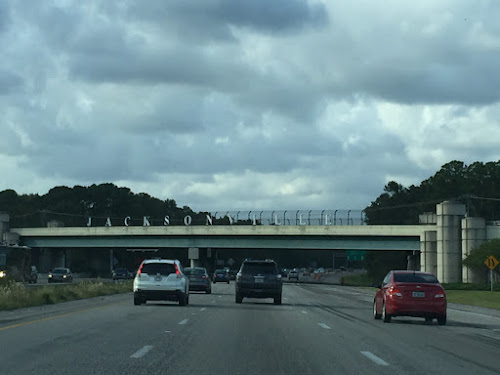 First though we had to make the 16 hour drive to the Asheville area where my sister-in-law lives in a cabin in the woods. We decided to split the trip in Columbia, the capital of South Carolina, eleven hours away. The idea was to have a short trip the next day to leave time for exploration on the way to Celo, the small community east of Asheville which was my destination.

We stopped here and there for short walks but mostly it was a matter of driving and to leave the Keys and reach anywhere that isn't flat involves a full hardcore day of driving. I don't mind the drive with satellite radio and a comfortable car. Rusty settled in to his bench seat in the back which is filled in behind the driver's seat to make an "L" shaped bed. 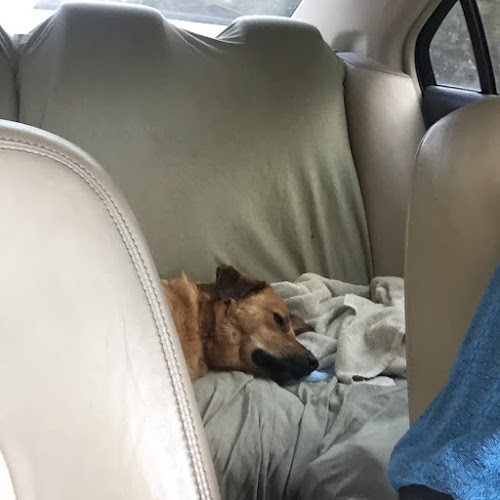 Eventually it got dark around 7:30 and we arrived in Columbia around 9:30. La Quinta was full so we had reserved a Red Roof Inn, another dog-friendly chain. Check-in was a reminder of my work: 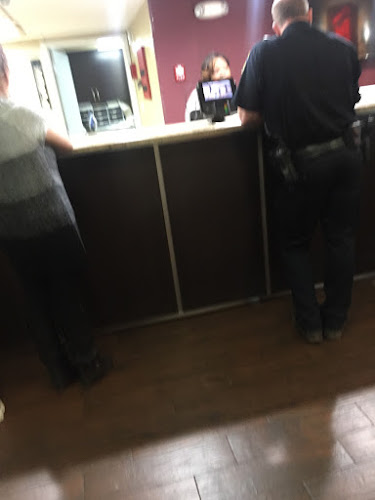 A cop was taking statements from a family complaining they been harassed and someone had stolen an expensive knife from their room. I was past caring. The room was $59 all included, the TV didn't work which was fine by me and the sheets were clean (I think). Rusty was ready to pass out and so was I. He woke me with a cold snout to the face at 4:45 and over all my protests demanded a walk. The parking lot was silent as you might imagine but I found evidence of what might have been the stolen knife being put to use: 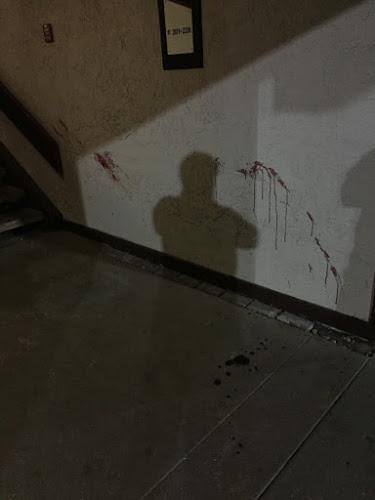 Not my blood, not Rusty's so all was well. We left the accursed motel at six and went foraging for breakfast in rural South Carolina early on a Sunday morning. I ended up eating the sandwich my wife had packed while Rusty ate a chicken strip on the road. My plan was to explore a patch of green I had seen on Google Maps and stick looked likely on street view. It worked out. 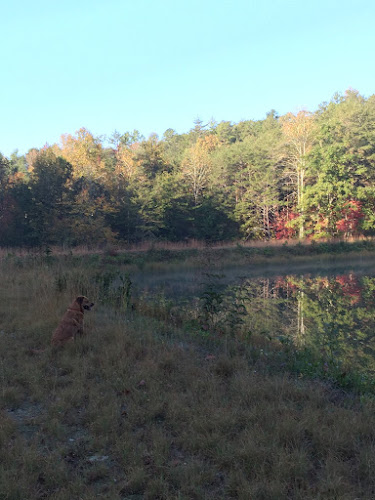 I parked in a small lot off a dirt road I had spotted on the map. Then a Honda Element pulled in and I asked the driver if it was safe to walk or were they shooting turkey today. Not on Sunday he said and offered to show me the way to Lake Wattacoo (I think). 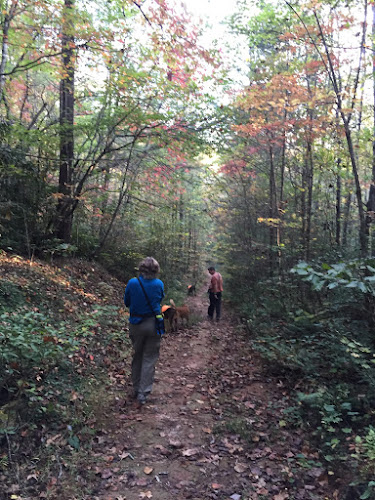 Pam had retired from 28 years as a school agronomist so she knew all the trees and their stories. Tom kept a close eye on their two rescued Plott hounds. We walked and talked and they told me of their latest rafting trip down the Grand Canyon. They live forty minutes away but they know these trails very well. We saw waterfalls a lake and visible signs of beaver, the first I've ever seen: 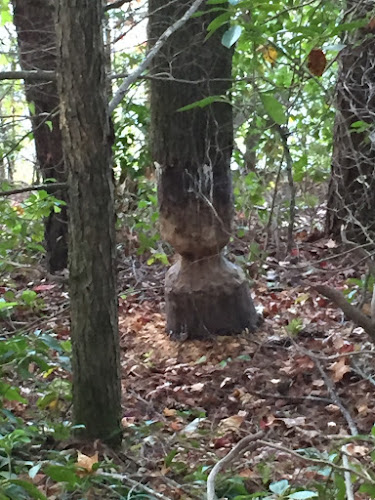 It was an extraordinary window into little know local sights near Cleveland, South Carolina. 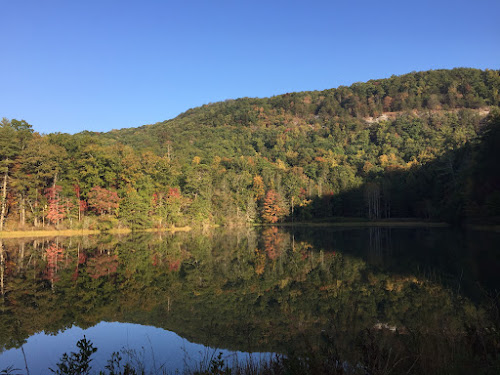 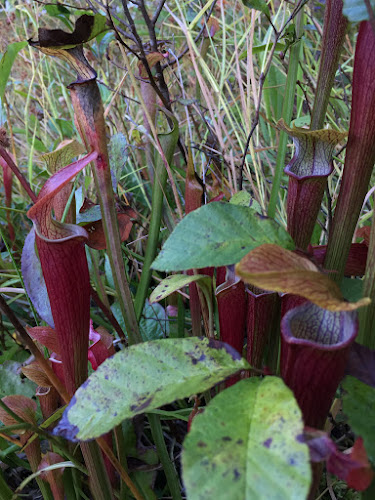 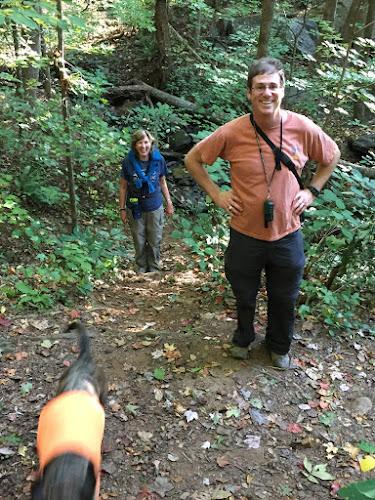 Much gratitude and before we split they showed me a modern take on the Sugarloaf Key bat tower: 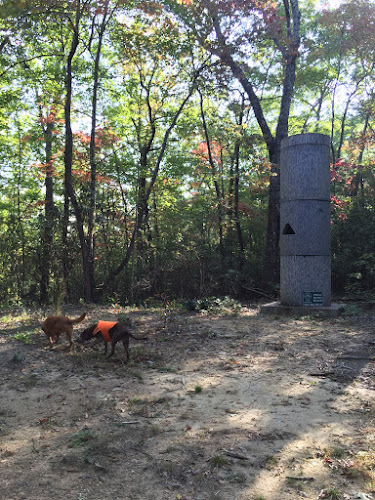 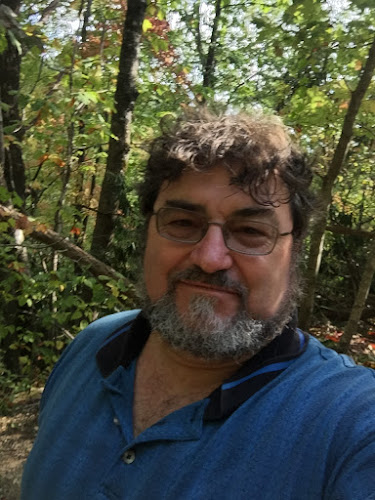 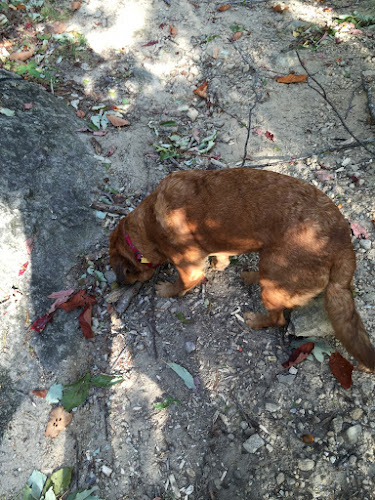 We stopped again and again and Rusty was totally absorbed by the smells and sounds of these woods. 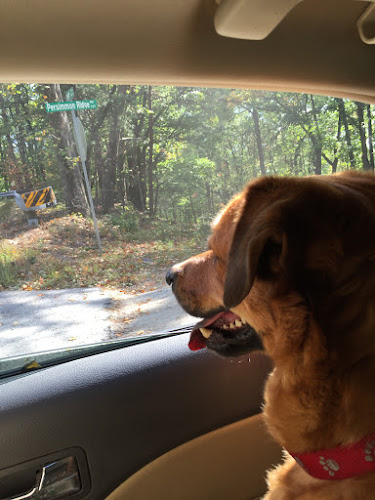 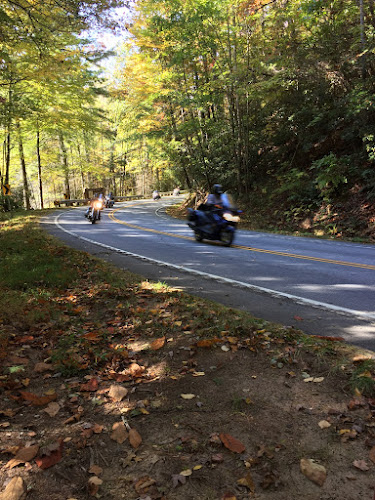 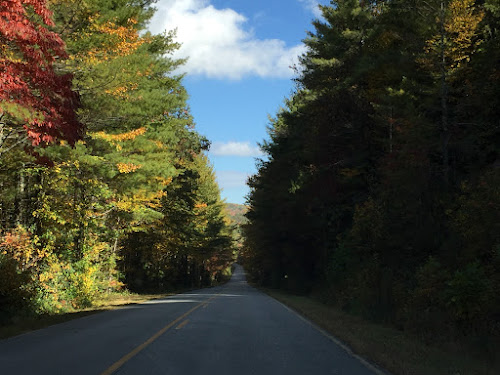 And then we took a dirt short cut for fun: 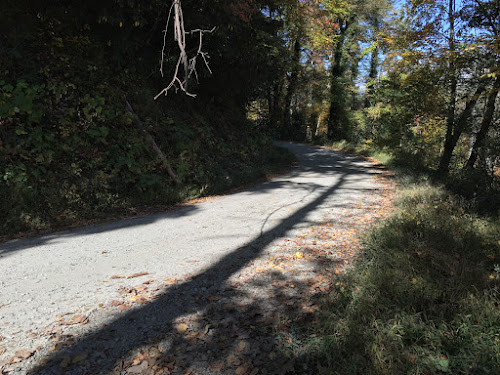 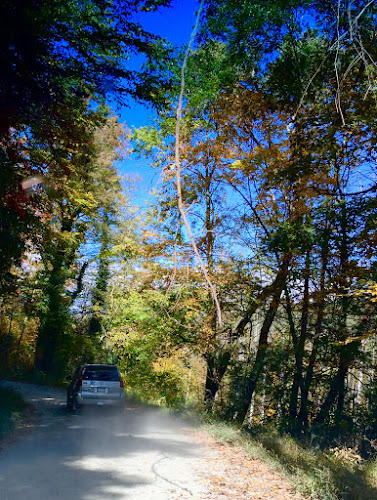 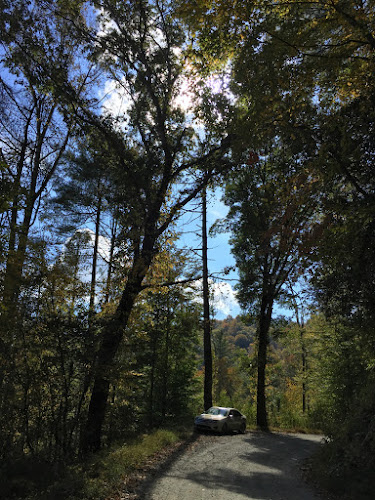 It was time to make tracks to the Blue a Ridge Parkway to avoid traffic around Asheville and Burnsville. Unfortunately it was Subday night and weekend drivers were out in force and barely able to drive 30 miles an hour such was the draw of the colored leaves...we even found ourselves unable to keep up with a cyclist. The Italian driver within me was appalled: 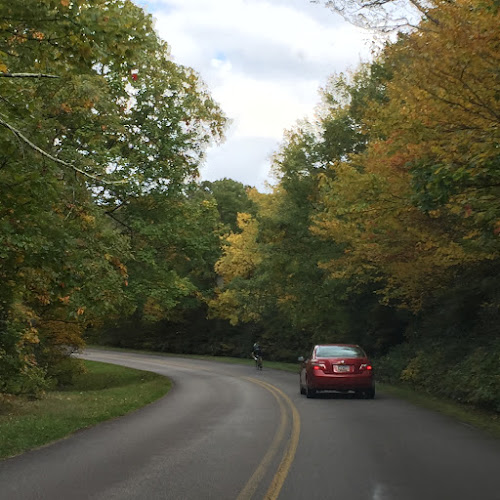 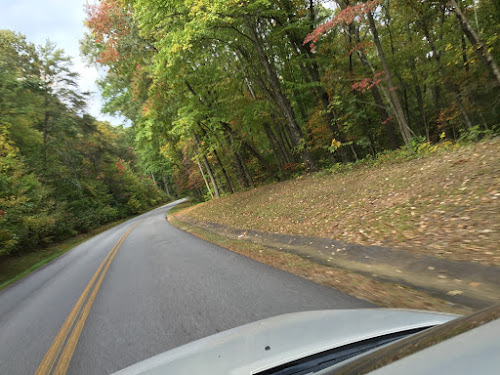 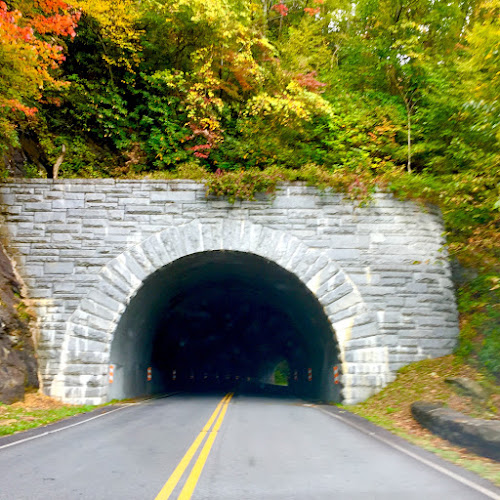 And so north off the parkway, still lovely still twisty: 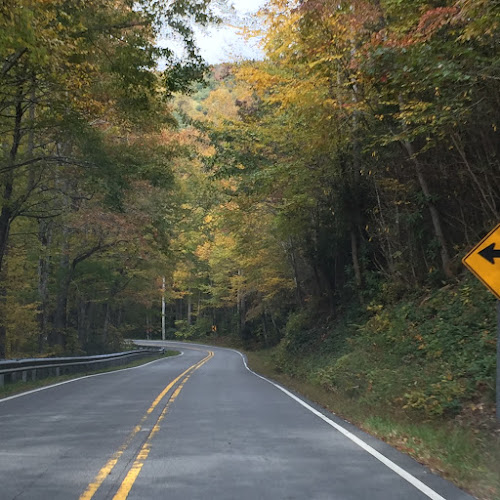 And so to our base for the next three days where my sister-in-law and her husband have lived for forty years: 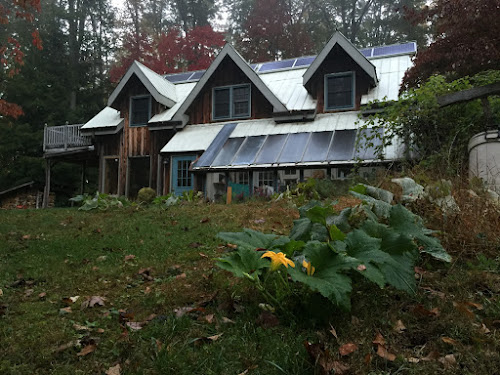 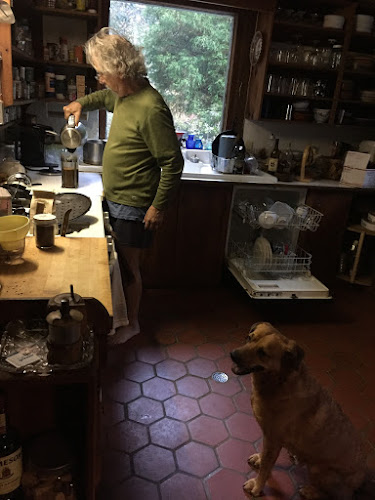 Bob and Geeta conversing after a pasta dinner over pisco and rum. 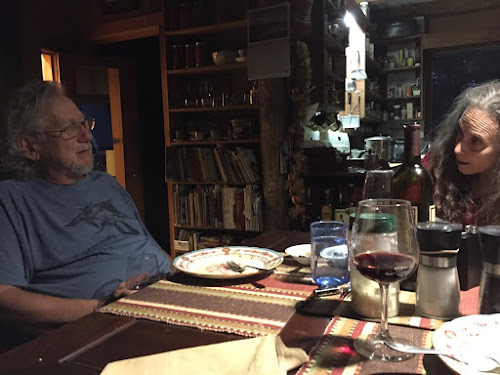 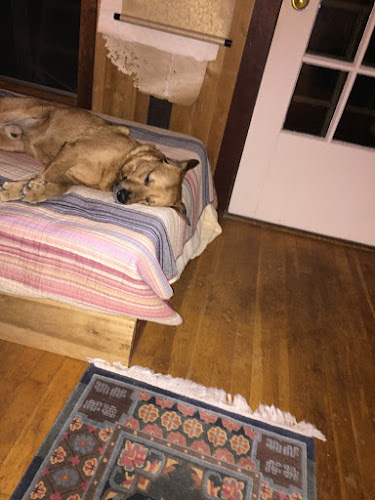 And so to bed.
Posted by Conchscooter at 12:00 AM 6 comments: Links to this post