The state of Florida is slowly starting to get serious about coronavirus even as we hear how early testing and isolation saved Singapore, Hong Kong and South Korea from the Italian Disaster. Whatever the slow pace has set us up for in the weeks ahead, right now public opinion is moving away from empty bravado and more towards trying to figure out what social distancing means and how to protect oneself, if not one's neighbors. 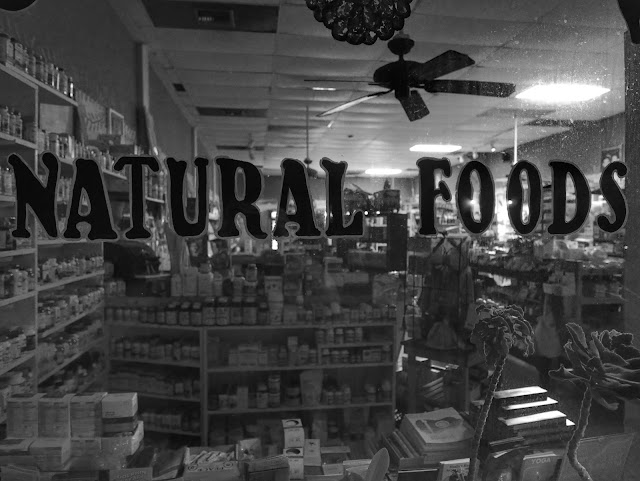 The City of Key West has closed all sit down facilities in restaurants allowing only delivery and take out. Monroe County has ordered eateries to halve their seating and keep diners six feet between tables. All bars and nightclubs in Key West are closed and some other businesses have agreed to close as well. Public attractions are closed including Smathers Beach and famously now the Southernmost Point which. friend of mine described as "nothing to see here." From Facebook: 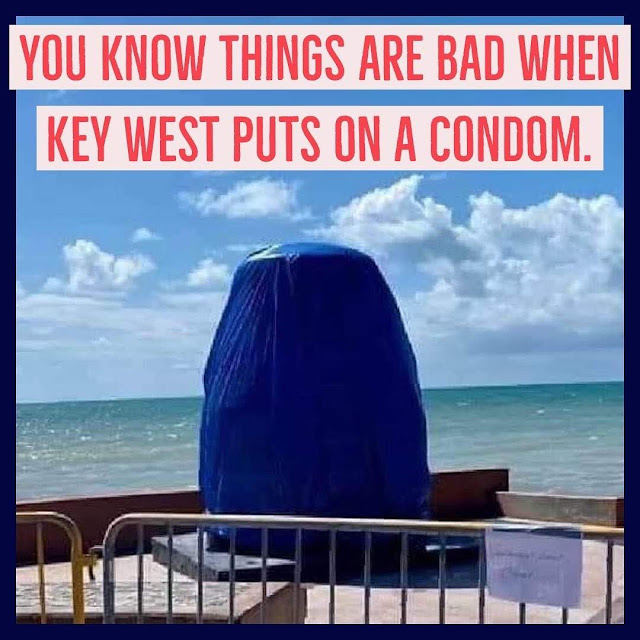 The state has ordered all schools closed until April 15th and testing is apparently suspended for the year. All this stuff is subject to change as you well know but finally Florida is moving to isolate the damned virus. There are rumors the county health department has virus testing kits and apparently a few have filtered down to doctors, a mere handful. The problem now is that testing is reserved to confirm obvious symptoms not to plough through the population to see how far the disease has spread and who to isolate. 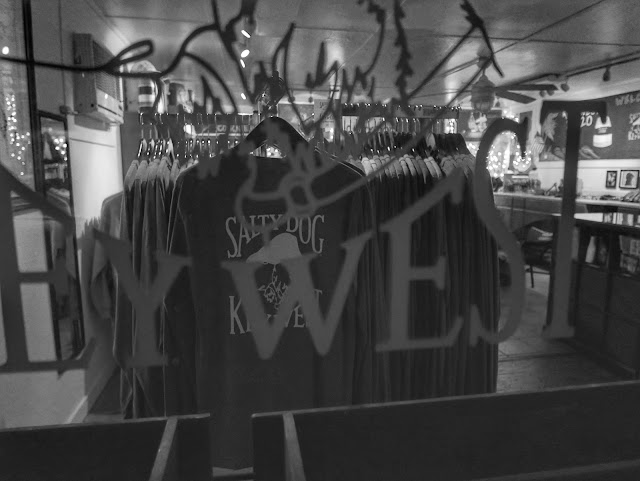 I am preparing to go back to work in a week and  I continue to carry with me the fear that I shall infect my immune deficient wife. Being the family front man in the grocery stores and walking the dog and avoiding human contact while out, would not be so bad were it not for the ever present fear of contamination. What makes it easier I suppose is that more and more of us are understanding the need for action, however weird our lives become. Actually that's crap. 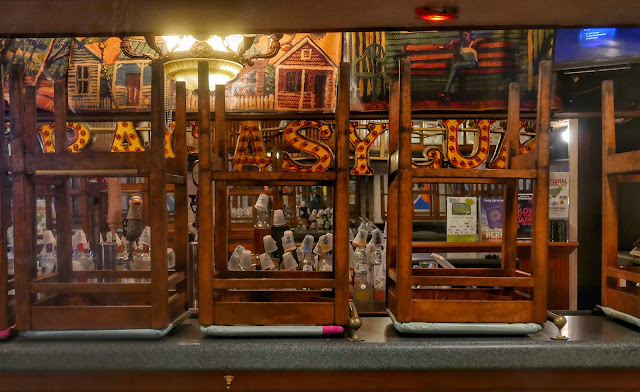 This nightmare is now going to go into high gear and money is going to evaporate alongside many peoples' health. You know things are bad when Republicans are falling over themselves to give ordinary people money, and I suppose we should be grateful this is an election year. Goldman Sachs will make out like they always do but we have to hope working stiffs will get help with rent and medical bills and buying supplies because for all that we hear most people have no reserves we only see what that means in times like these. 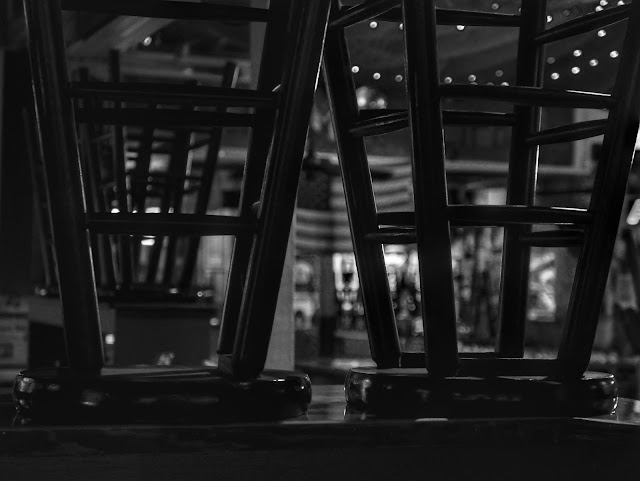 I took these pictures a while ago as Rusty and I walked past the Green Parrot before dawn, before the pandemic when the bar was closed as a matter of course.  We've seen similar crises during and after hurricanes of a certain severity but this mess is not like a hurricane when there is precedent and damage and closure lasts days and not for the foreseeable. Politicians are finally moving to force people to separate and stop the spread but no one is hazarding a guess when the virus will go away and normality will be restored. 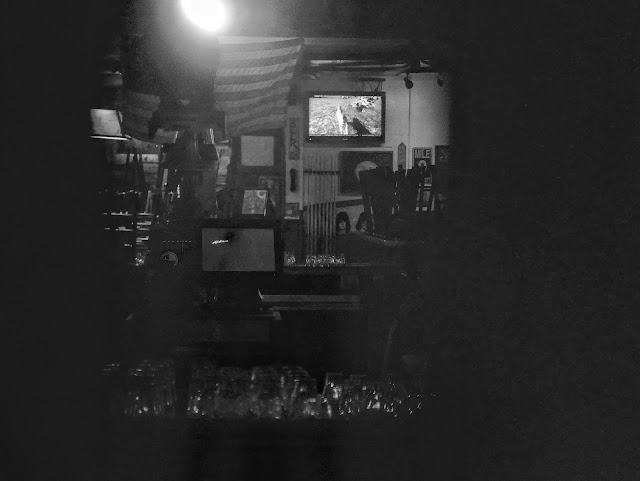 I don't suppose anyone gets elected planning to cope with the zombie apocalypse and I find myself unable to generate the kind of outrage about each decision the way you see on Facebook. Beyond partisan politics and our president's bizarre leadership I am glad to see Congress stepping up and working to give assistance.  I got a bit irritated I confess reading about how piddly European countries were promising help to there citizens and our lot were learning to play their violins while the virus took root. I see lots of hope ready to blossom even as things get creepy in our towns and things shut down. 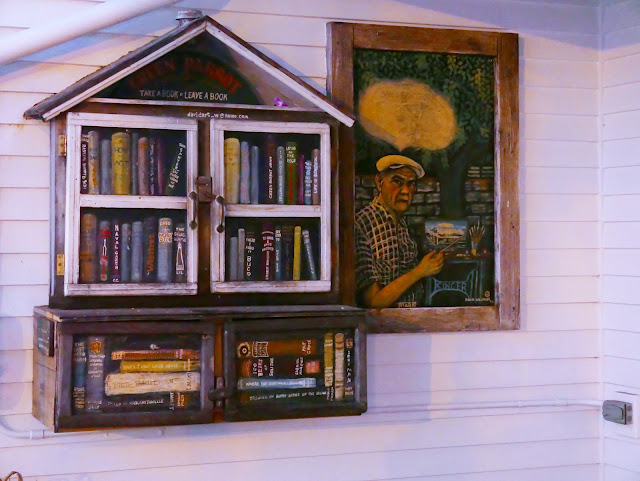 I have been reading lots of comparisons to the Spanish Flu and the early AIDS epidemics and even though I'm not at all sure how relevant those nightmares were to the current problems, history still has lessons to offer us. Its early to be asking how long these straitened conditions will last but we hear the worst appears to be over in China, that's the good news, but the bed news is they started to see symptoms, even if they didn't under stand them, last November. The virus was identified as a flu derivative at the end of the year. 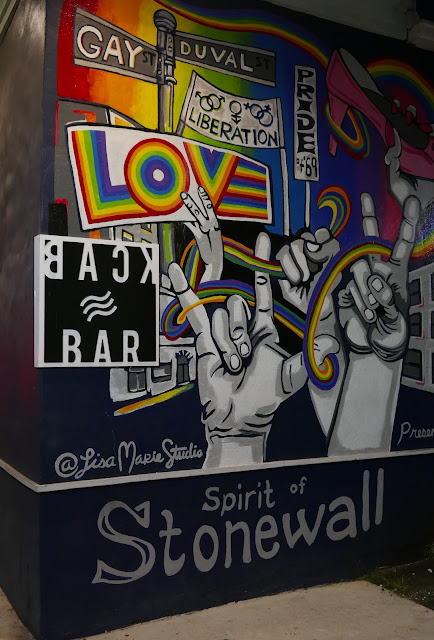 That means if we extrapolate the times this outbreak in the US could similarly last say four months...Imagine we are cautiously celebrating the glorious Fourth of July by saying good bye to the virus and its effects. And to the people it killed. Such a timeline seems a bit inconceivable but everything goes into a dystopian continuum when pondering Covid-19 and its effects on society. 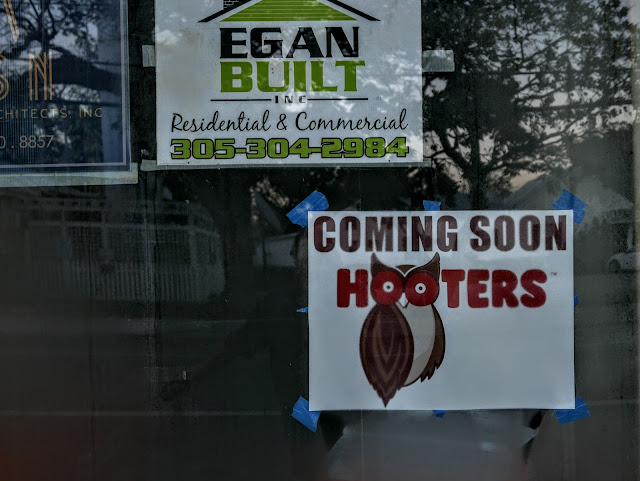 Key West and the Lower Keys are going into a new phase, a response to the threat. Sitting on the sidelines and watching is interesting. Indeed we are living up to that over quoted Chinese curse about wishing your enemies might live in interesting times. A bit too interesting for my taste.
Posted by Conchscooter at 11:00 PM 2 comments:

During  the recent spell of prolonged strong winds I got a 911 call from a man who, in a panic filled voice asked to be transferred to the Coast Guard. I stayed on the line in case the Coasties requested help, an ambulance perhaps or an officer depending on what was happening. 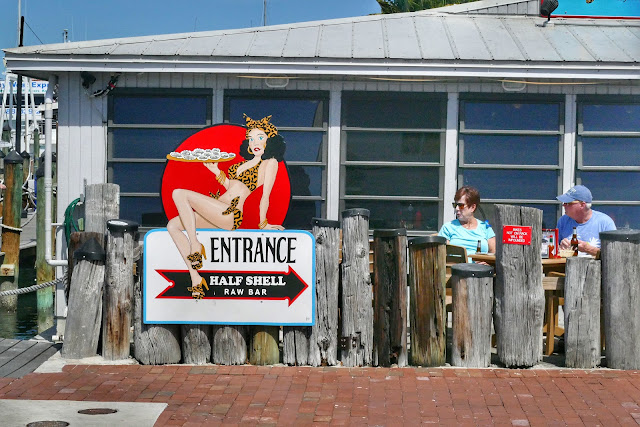 It turned out the would-be sailor was in no danger but was freaked out by the gusts that were pushing water into his dinghy and sinking it. The Coastguard operator did an excellent job of sorting him out and calming him down and I hung up reminded that it's all very well wanting to live like a devil-may-care boater but when the winds blow you still have to be able to cope. Self sufficiency doesn't come easy. 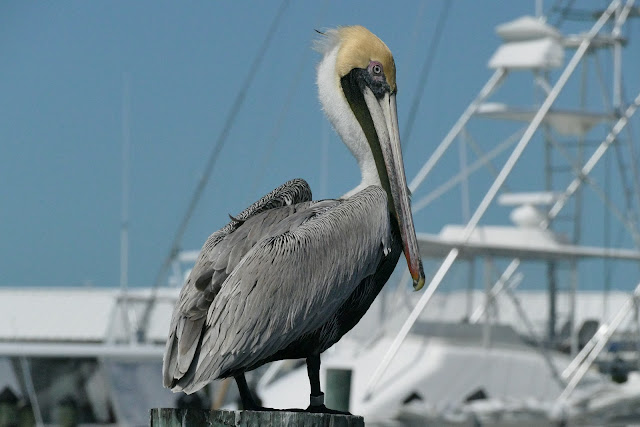 The commercial boats were sensibly secure at the docks. I joked with this guy about reading a paper book and he laughed. I have actually bought some books recently lacking electronic versions but in a life of limited space a pocket sized library is a thing of wonderment to an old man. Especially when you can read in line, in the dark, in the wind with ease. 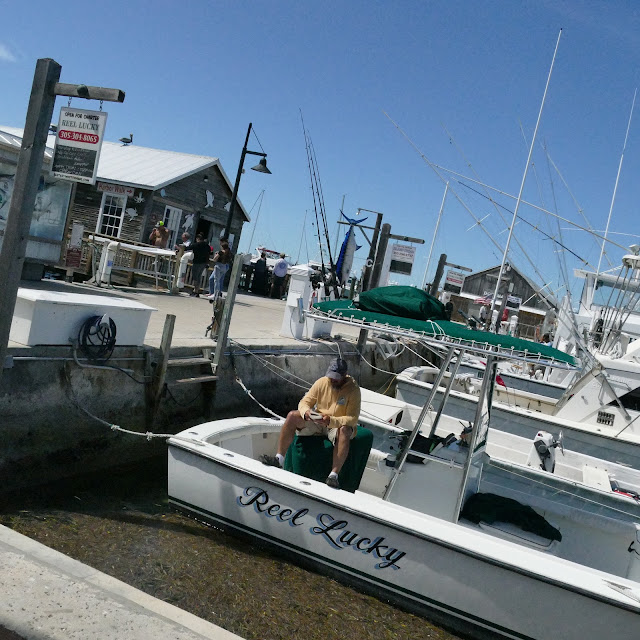 They say the Coronavirus is emptying out hotels and cruise ships and restaurants and all manner of large gatherings. It has also been said young people are the least affected by the 'flu visiting us all from China, which may explain why Spring Break is keeping much of Key West busy. 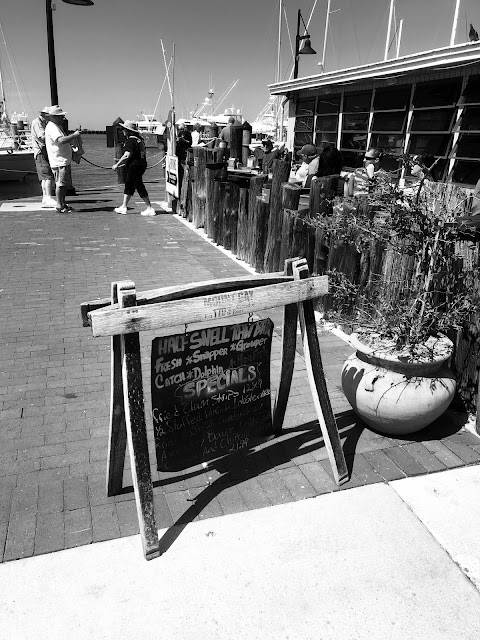 While re-evaluating my position in respect of electronic books I am also forced this Spring Break to reconsider my feelings about mobile phones. I love my iPhone with all the features it offers me in the palm of my hand. I have to say though that it may also be too much of a good thing. I get numerous calls from parents who worry that their off spring haven't answered their phones for the past six hours or similar. It seems parents have an extraordinary ability to imagine their little dears don't drink and seek out new friendships, even brief ones, while on Spring Break. I should have hated to be on a cell phone leash when riding around Europe on a motorcycle in my misguided youth.. 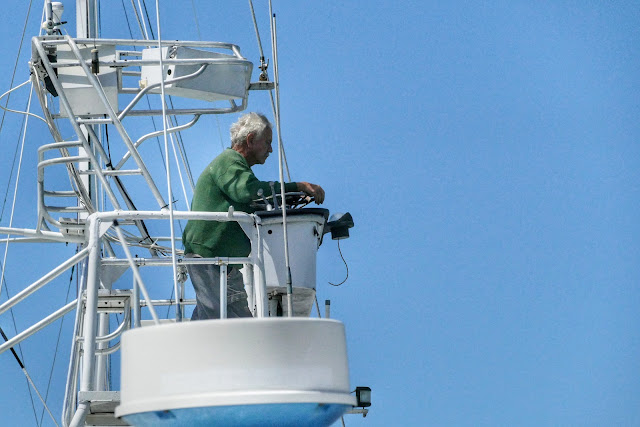 For the old timers in Key West who live on the margins of the youthful frenzy of swimsuits and pool parties and indulgence  life goes on on, for him the commercial fisherman, and me the office worker. We stand back and ponder and watch. 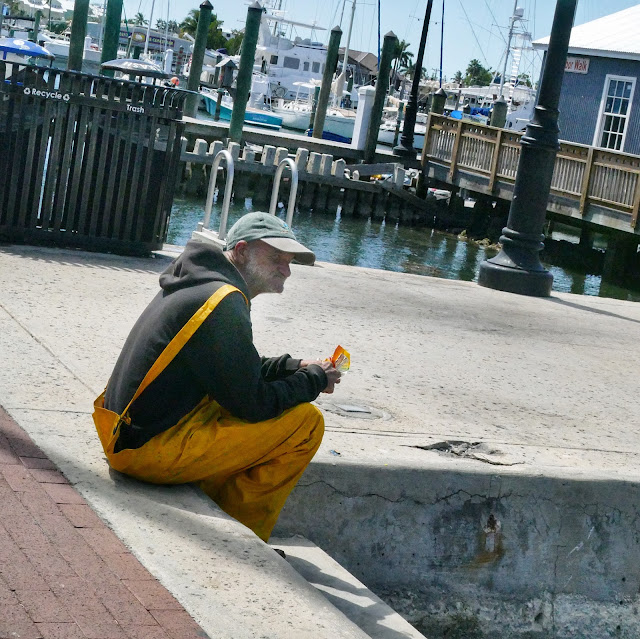 In the middle of the chaos an al fresco picnic to celebrate the fact that snow is never seen in Key West, not all winter long. 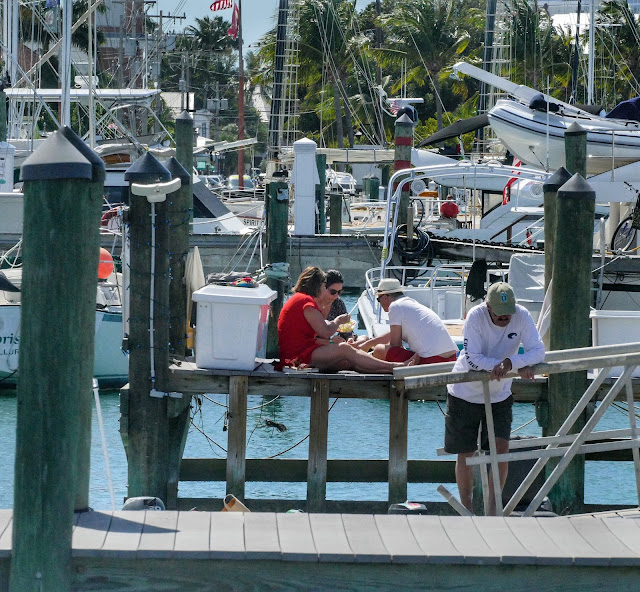 Entering the harbor it was fortunate the man at the front of the boat was not the driver for he was facing backwards. 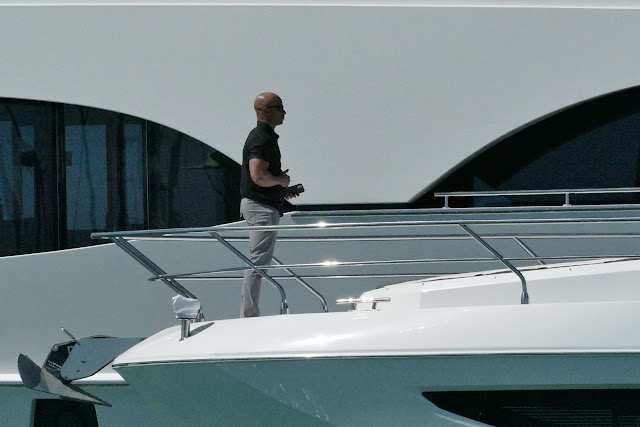 Some visitors appreciate the winter sun more than others. Or perhaps it was  a hang over cure in a quiet spot? 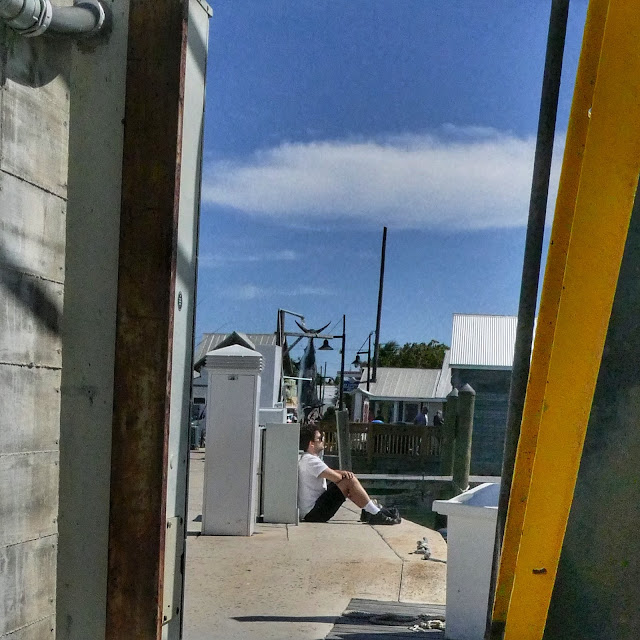 The couple I saw headed out into the wind and waves looked ready to get  wet: 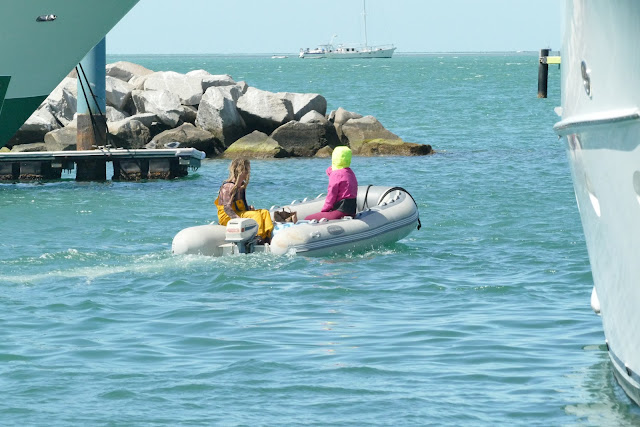 Wind  driven waves don't get huge around here but there was plenty of spray to make their precautions justified. 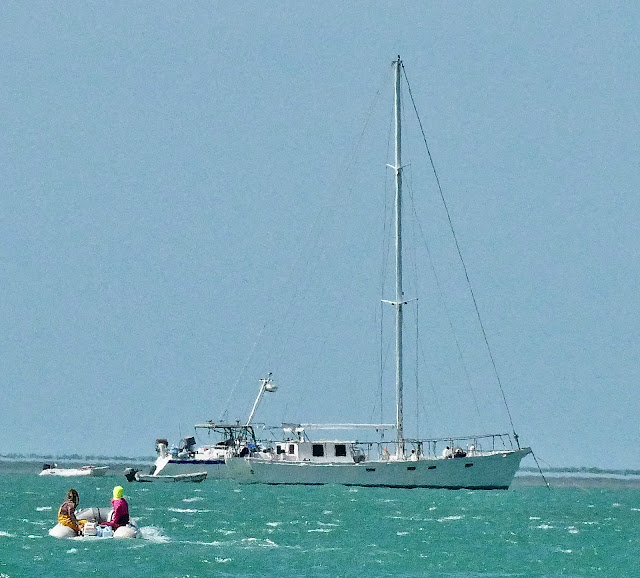 I got back on my trusty electric bicycle and rode back to work. Head winds are no problem even with a small 350 watt motor. 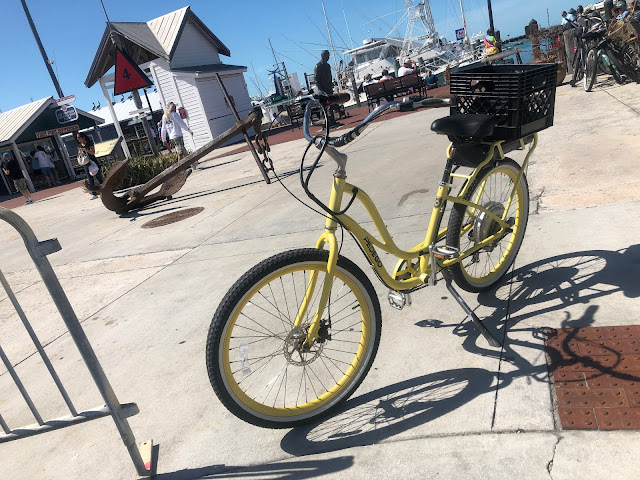 The entrance bridge to Key West is supposed to start getting torn up one lane at a time next week. Thats when my bicycle rack and my electric bike will come into their own.
Posted by Conchscooter at 7:30 AM No comments: