I came close to turning around and heading back to key West to sort out mislaid paperwork but the miracle of modern technology, via a few phone calls and some emails and remote signatures returned to sender electronically and snail mail and it seems my lost pension paperwork is now found. Jolly good then. I was not looking forward to driving back to city hall three weeks after I left on an open ended trip and figuring out where to stealth camp in the city where sleeping in your vehicle is banned and frowned upon and totally declassé... 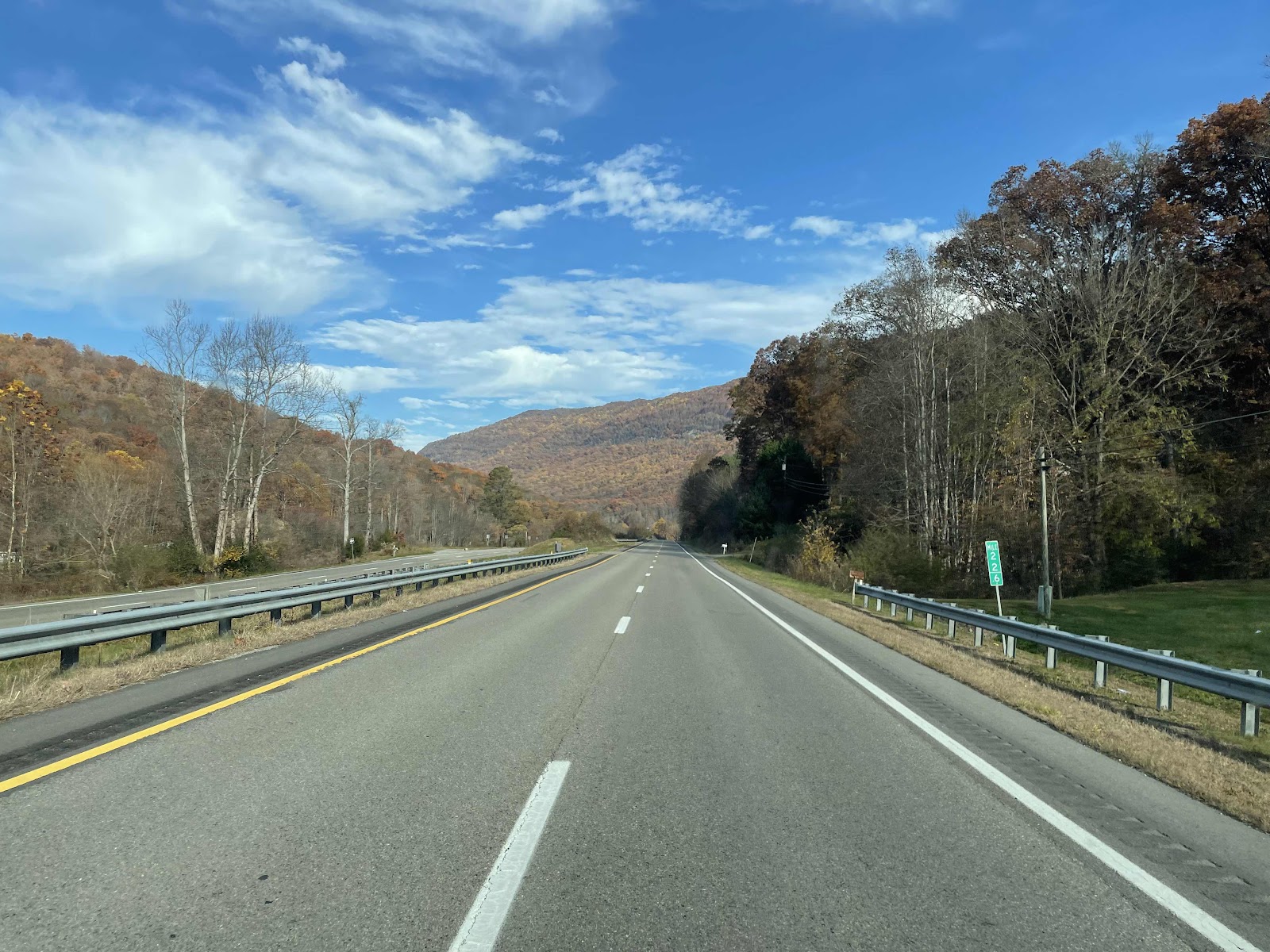 Humiliation and frustration were in our rear view mirrors as we set a course for Chicago via the Red River Gorge of Kentucky, somewhere south of Lexington and close by the Daniel Boone National Forest. First, much to our surprise we had to cross about sixty miles of Virginia. I wish Google maps used clear yellow lines to mark state and national boundaries as I find their weedy white dotted lines difficult to discern on a road map filled already with squiggles. Anyway we were driving up mountains and down valleys through leafy vistas. 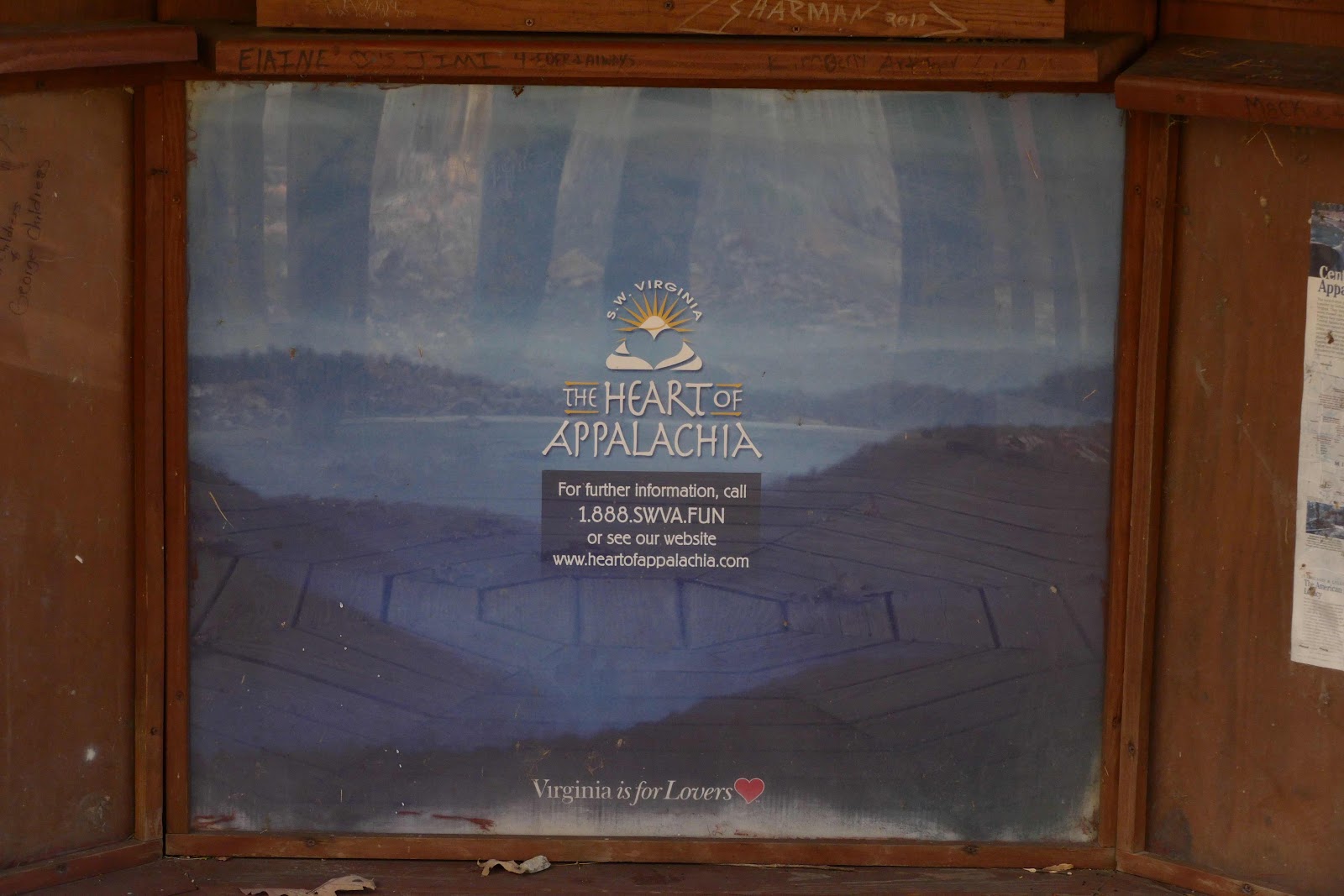 Stop! My wife said and we did at the Powell Overlook, a place not obviously given to viewing scenery owing to the huge lump of dirt at one end and a huge bunch of yellow and orange leafy trees at the other. 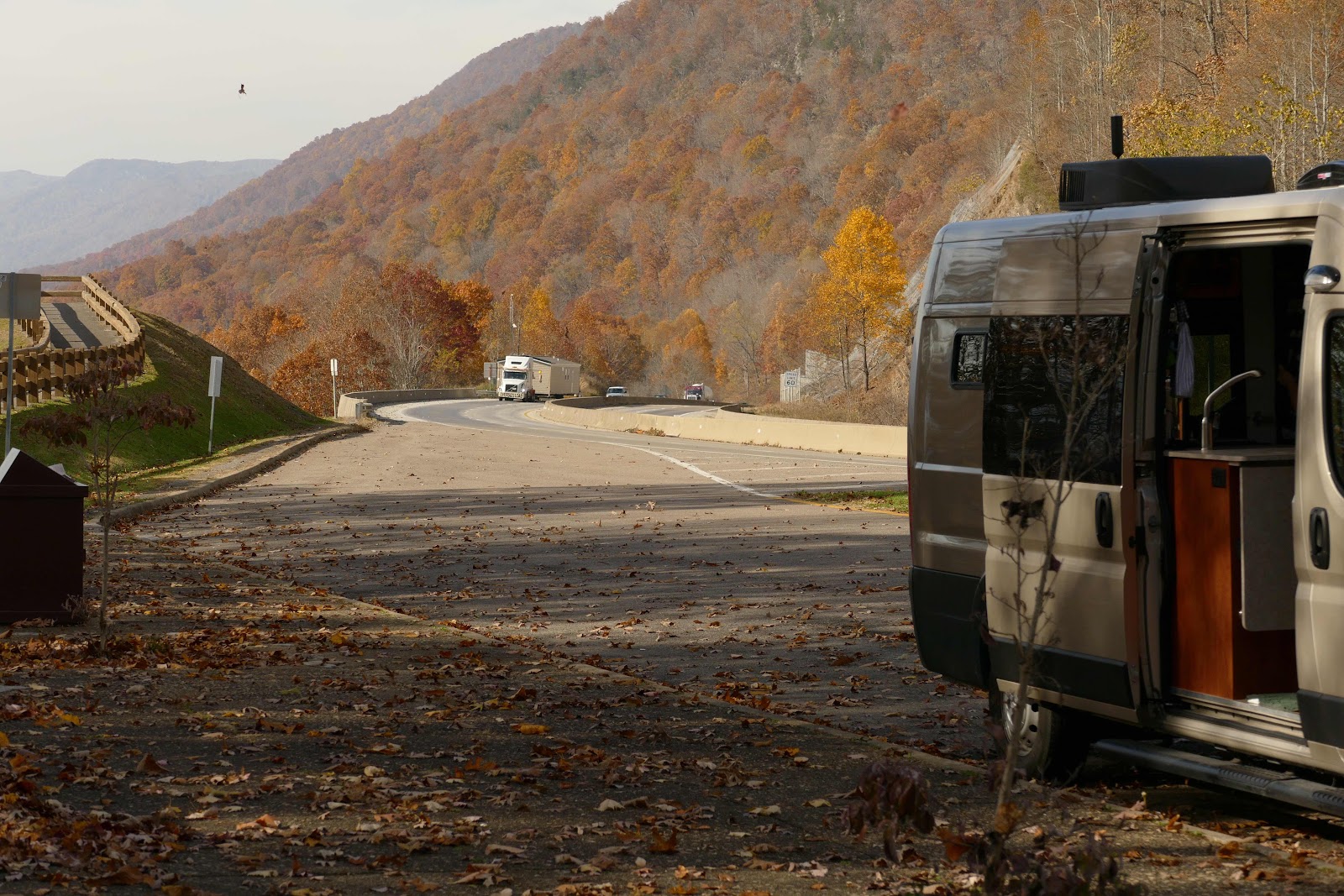 We were alone when we arrived so I slid the side door open to let the impatient snorting hound out while we assembled the modest gear needed to record this epic stop. By then a car had been drawn magnetically to our spot and our dog was nowhere to be seen. 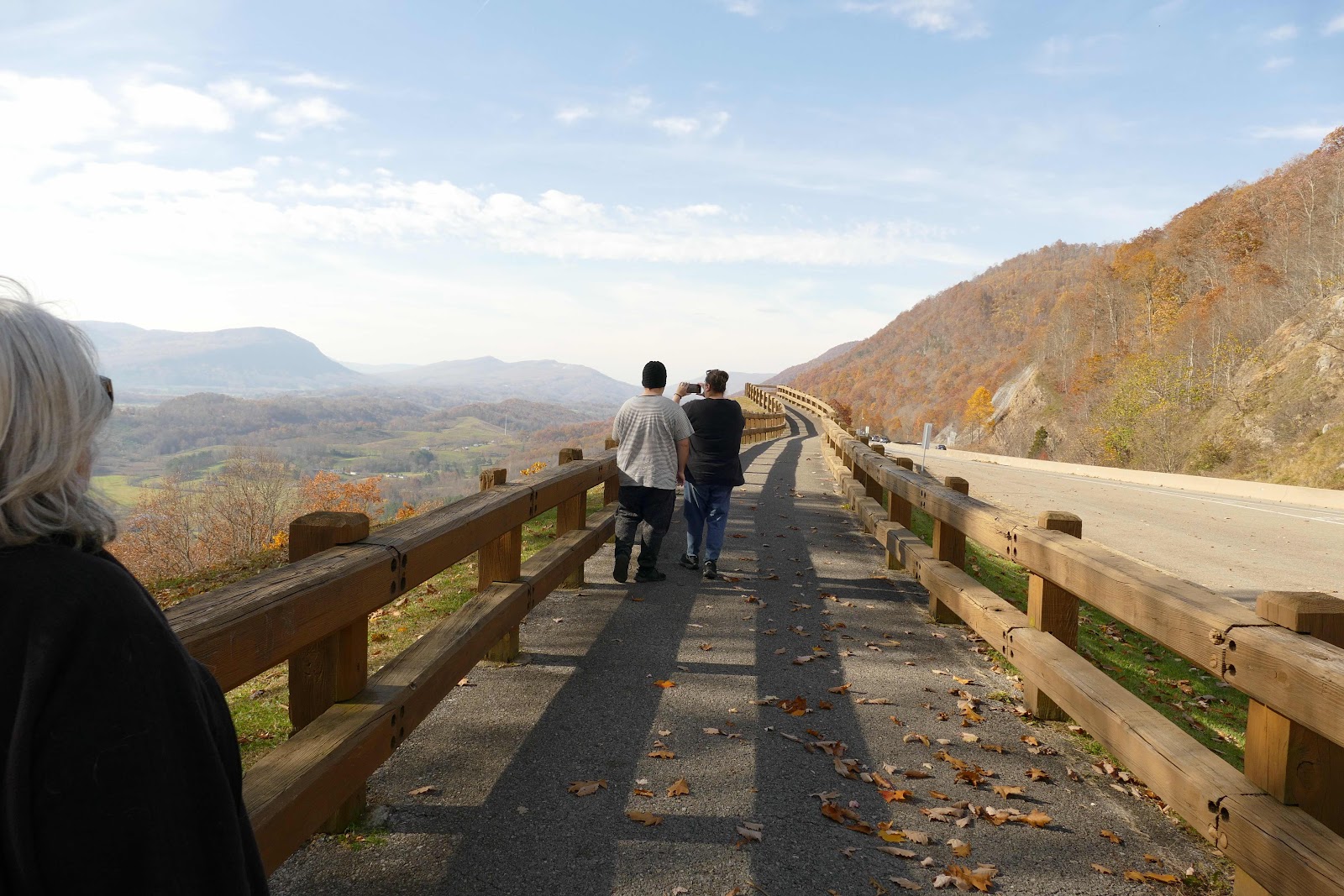 I looked typically at the left end of the parking lot and then Layne spotted a red flag-like tail waving alongside the fence towards the lump of dirt which turned out to be the actual overlook... Rusty the tourist, another of his surprising transformations: 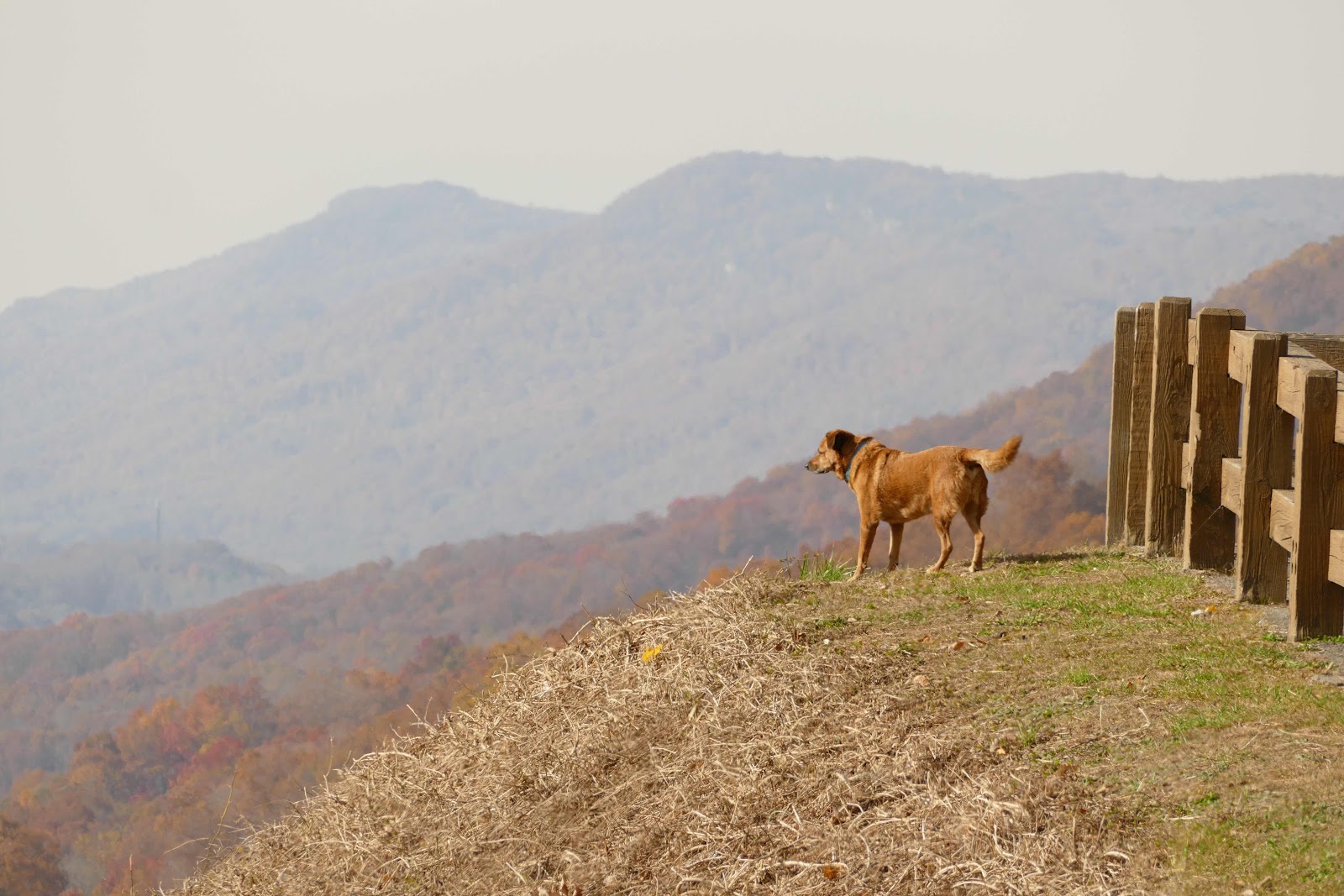 He took it all in as avid as any human in a place of great beauty to not miss anything worth seeing. 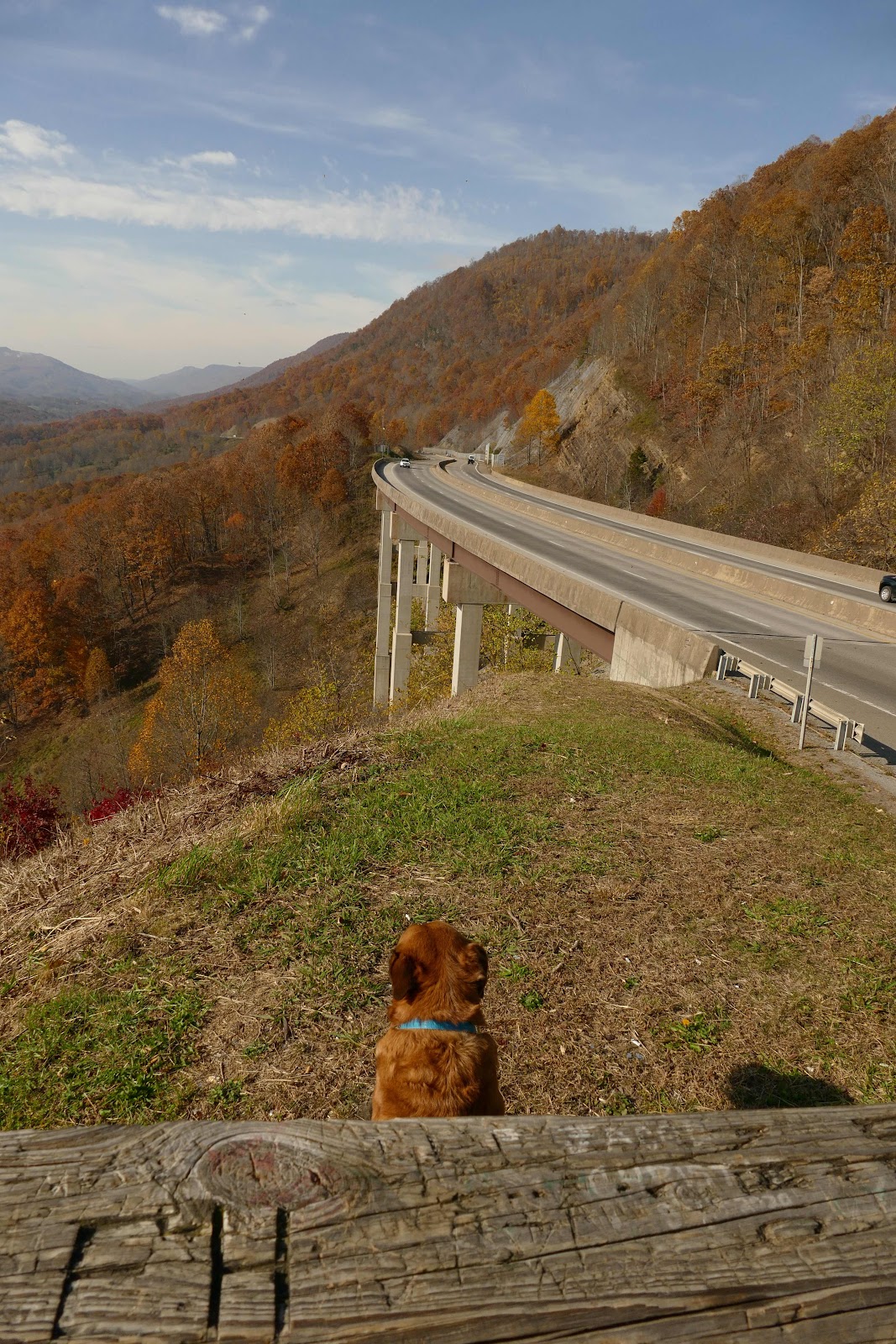 I am never quite sure how to photograph these vistas in a way that expresses the very real beauty of a valley spread out below you. 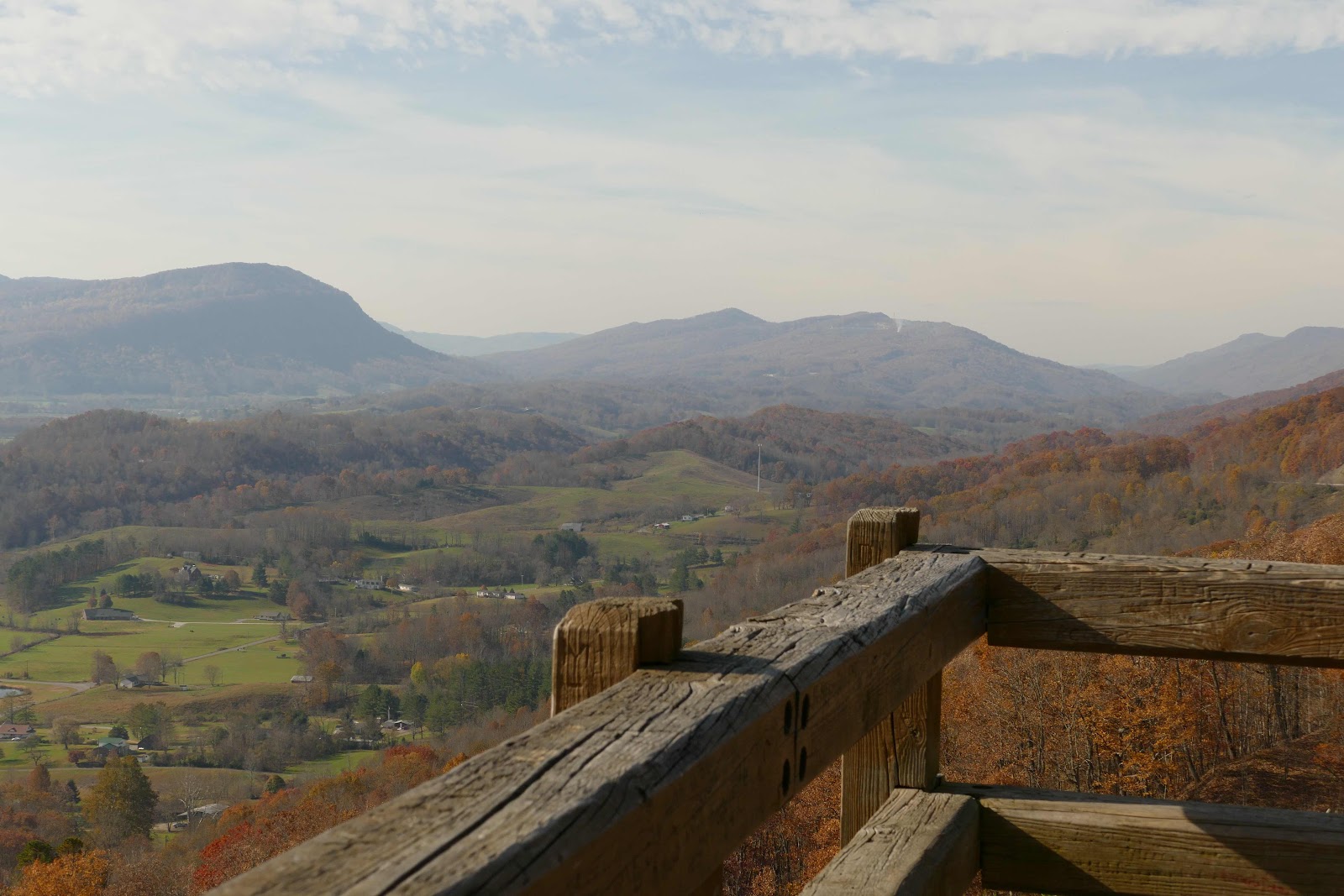 To drive the Promaster up and down these steep grades and not burn out the brakes the van has some very clever tools you can use, but only if you read the manual. Which is not something negative reviewers of the promaster tend to do. There is for a start a "Tow/Haul" button for vehicles towing trailers or loaded down in hill country just like ours. Engaging the tow/haul option lengthens the gear shifting points electronically and allows the van to use more efficient engine braking going downhill and smoother long gear shifts going uphill. Some owners use it all the time but on flat ground I find it necessary especially as you use more fuel with the feature engaged. 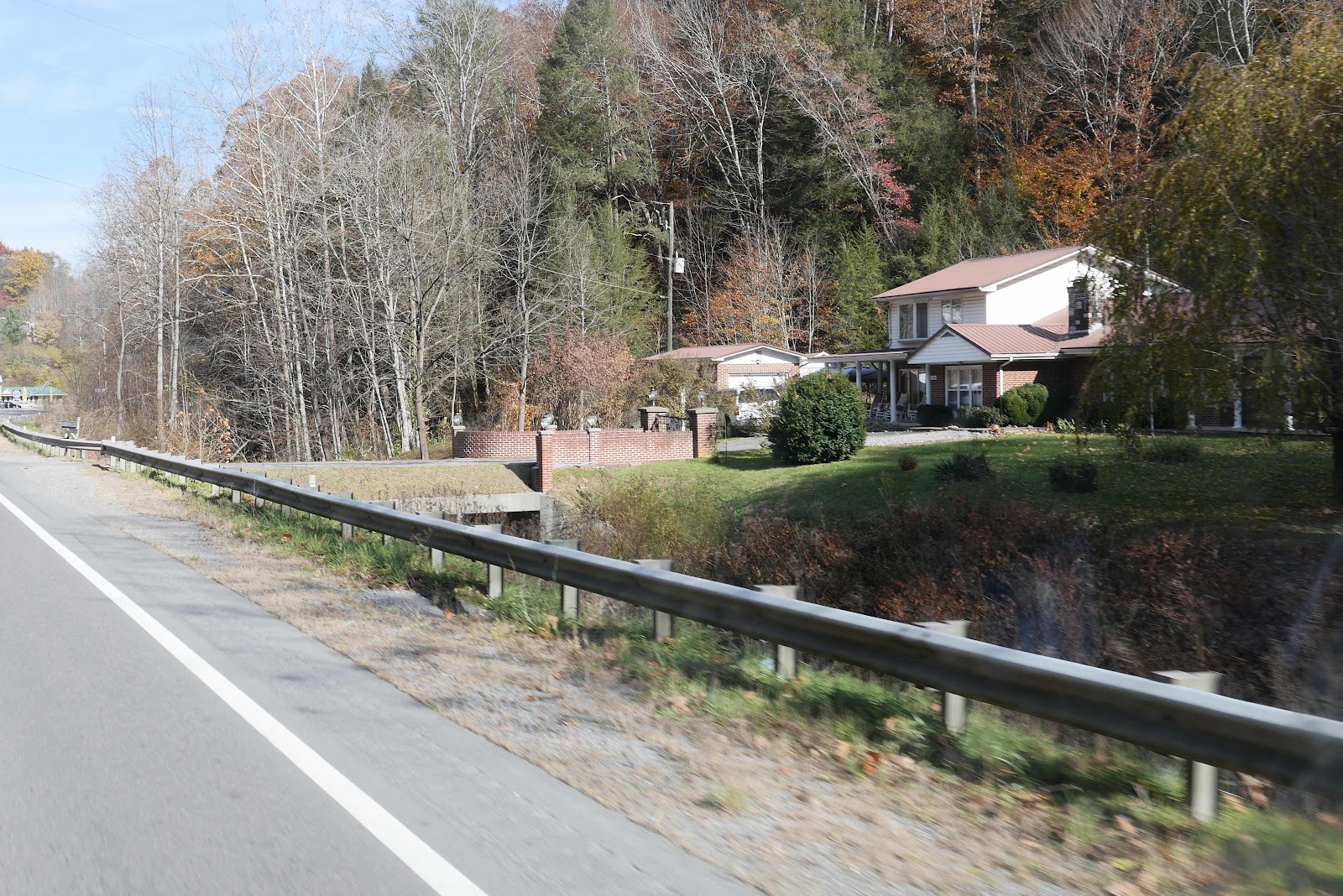 The other tool is manual shifting which is accomplished electronically so you can't blow up the gearbox but engaging fifth gear especially with "Tow/Haul" you get a smooth controlled descent down long inclines with no need to burn up the brakes. It's very clever. For mud and soft sand there is a form of electronic differential lock for the front wheel drive that I have used in Florida sand and it too works very well. I am growing more fond of my Promaster with each passing mile. We have 25,000 miles so far in two years and get around 18 mpg at about 60 sedate miles per hour. 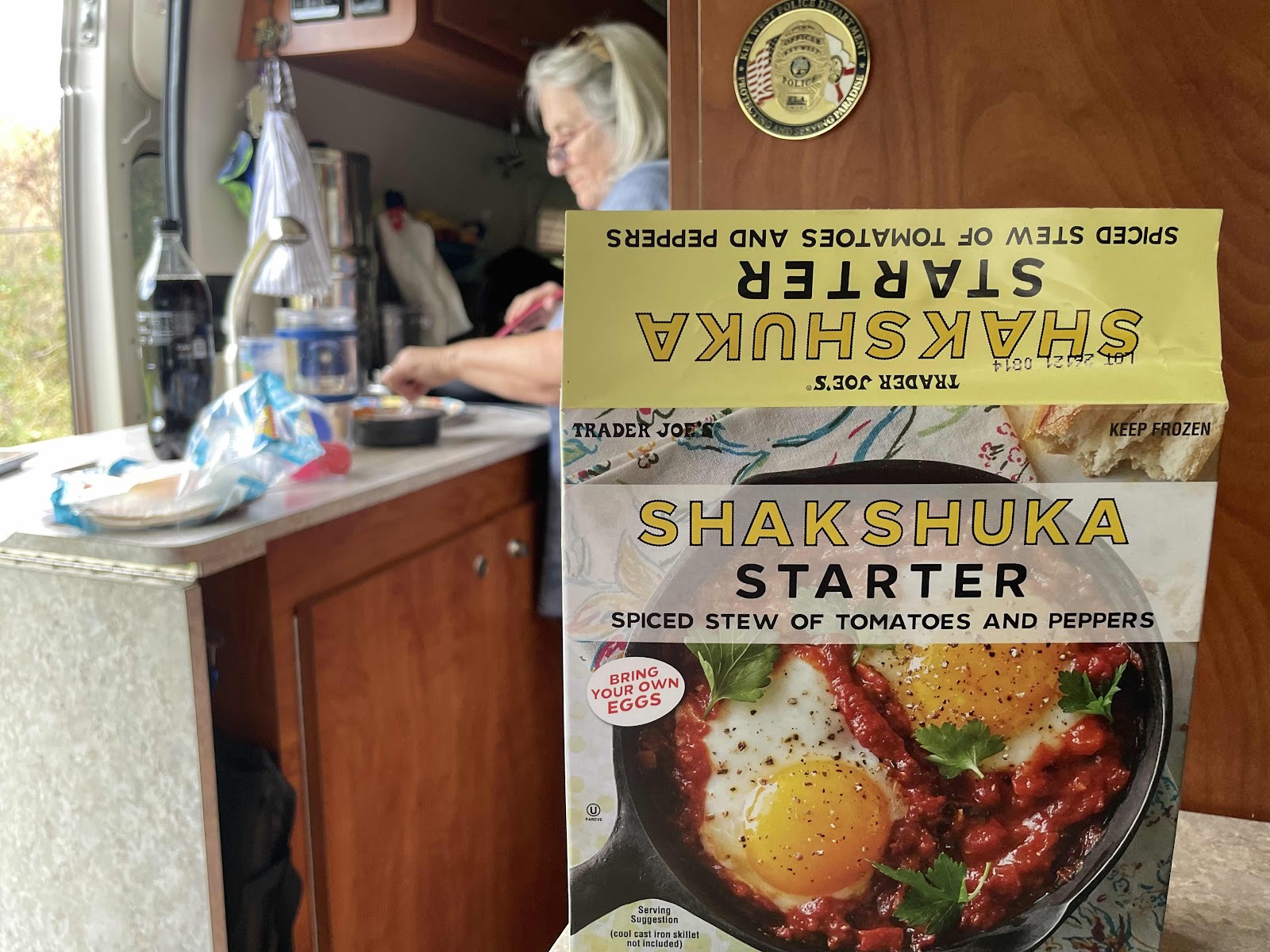 We sought out an Army Corps of Engineers picnic area at a lake which we discovered was closed for the winter but en route we had passed a small pull out rest area with a trash can so we used that to pause for lunch. Layne made a Trader Joe's Shakshukra sauce and fried a couple of eggs on our induction cooker while I walked the hound down to the lake. 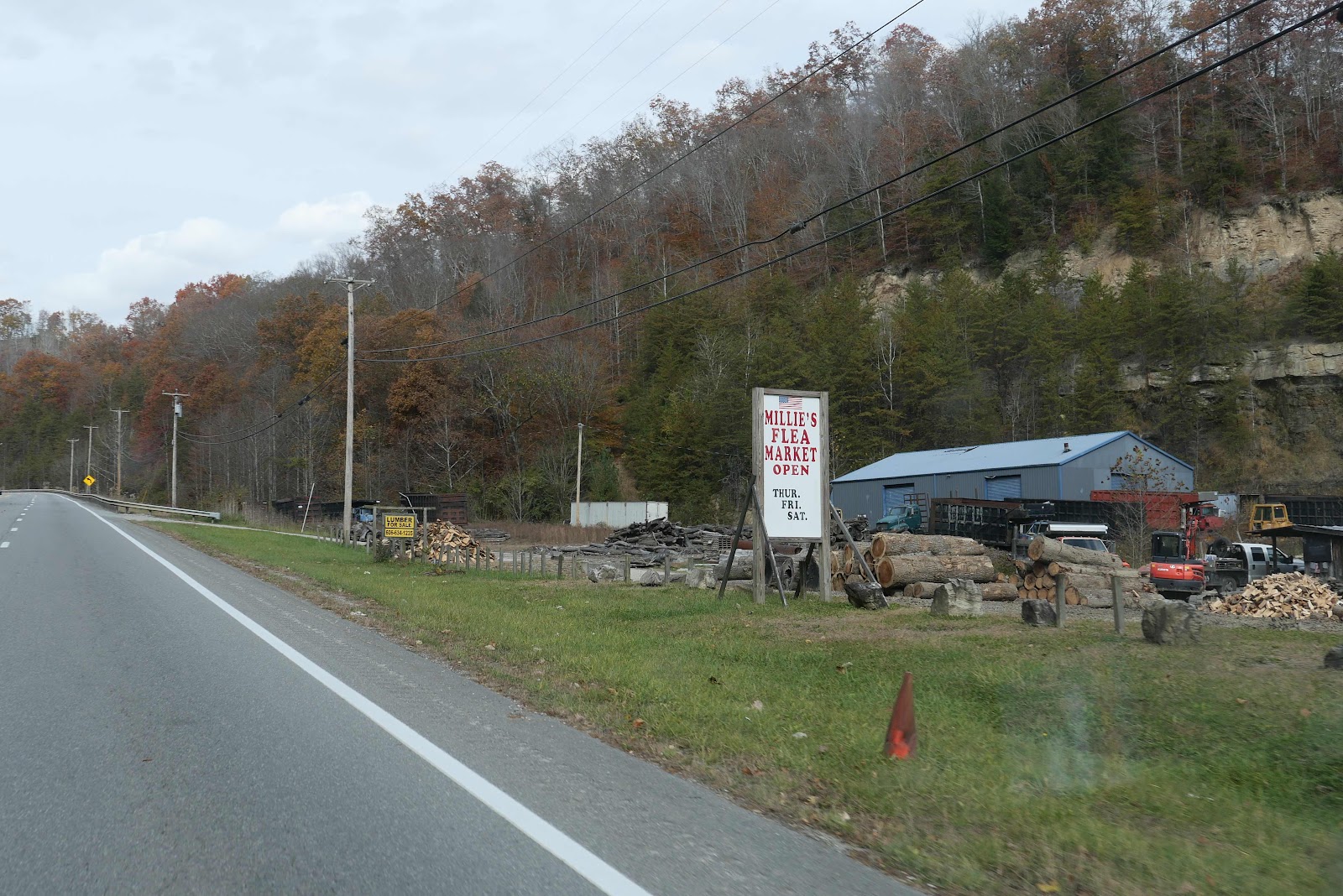 It felt slightly surreal to me to be listening to the BBC and eating. Jewish lunch in countryside steeped in American traditions of poverty and isolation like these Kentucky "hollows." Appalachia has been am area known for ghastly poverty and high rates of government welfare for people excluded from industry, coal mining and logging as the world around them changes and demands a new ecology. 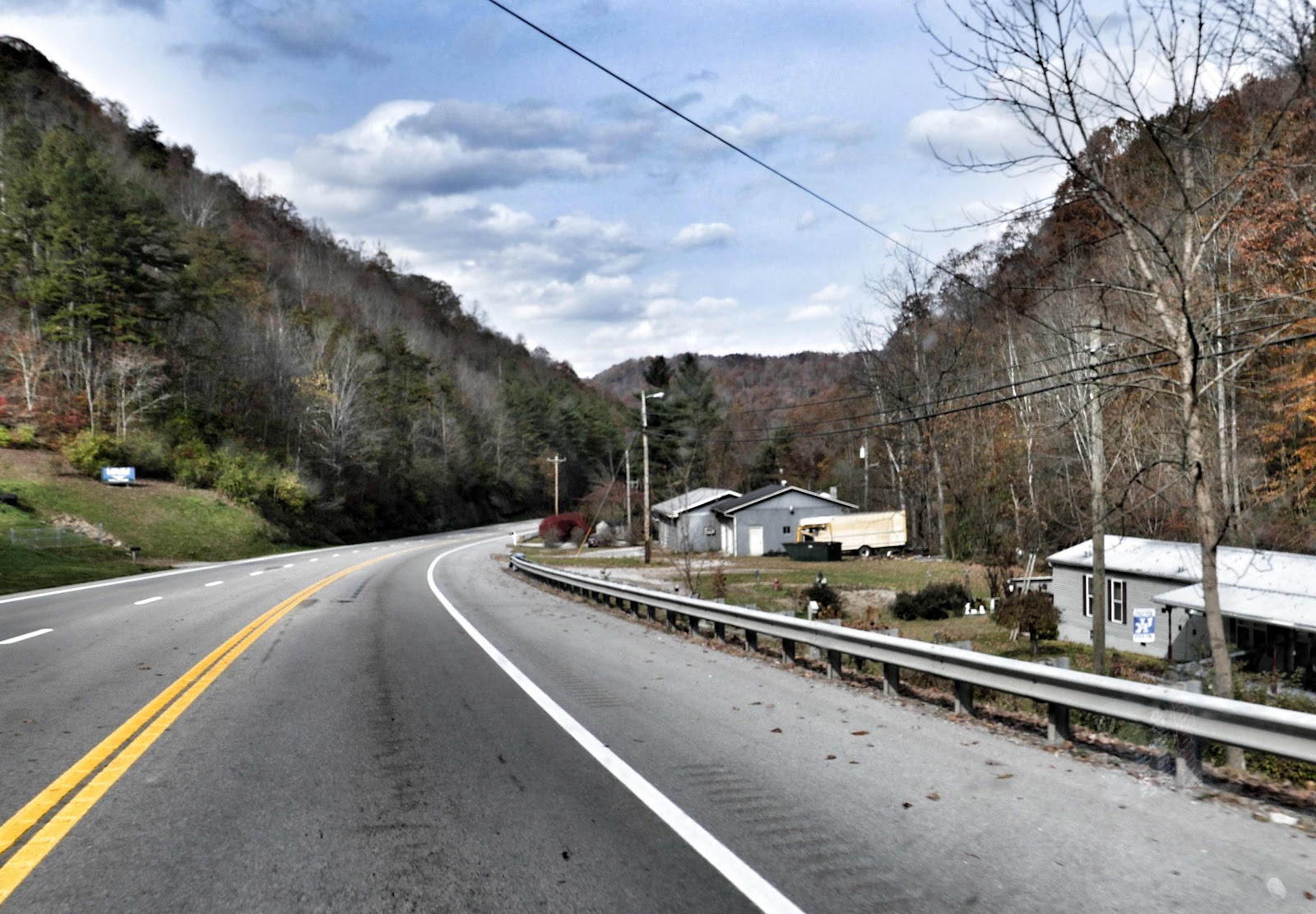 Americans fearful of driving in Mexico tell us that we will be robbed because we are so much wealthier than the locals but f that were the case we wouldn't need to drive further than here to face a similar fate. Instead we find locals with whom contact is limited thanks to Covid to be universally polite and kind. Fear of poverty does not speak well of us at all. 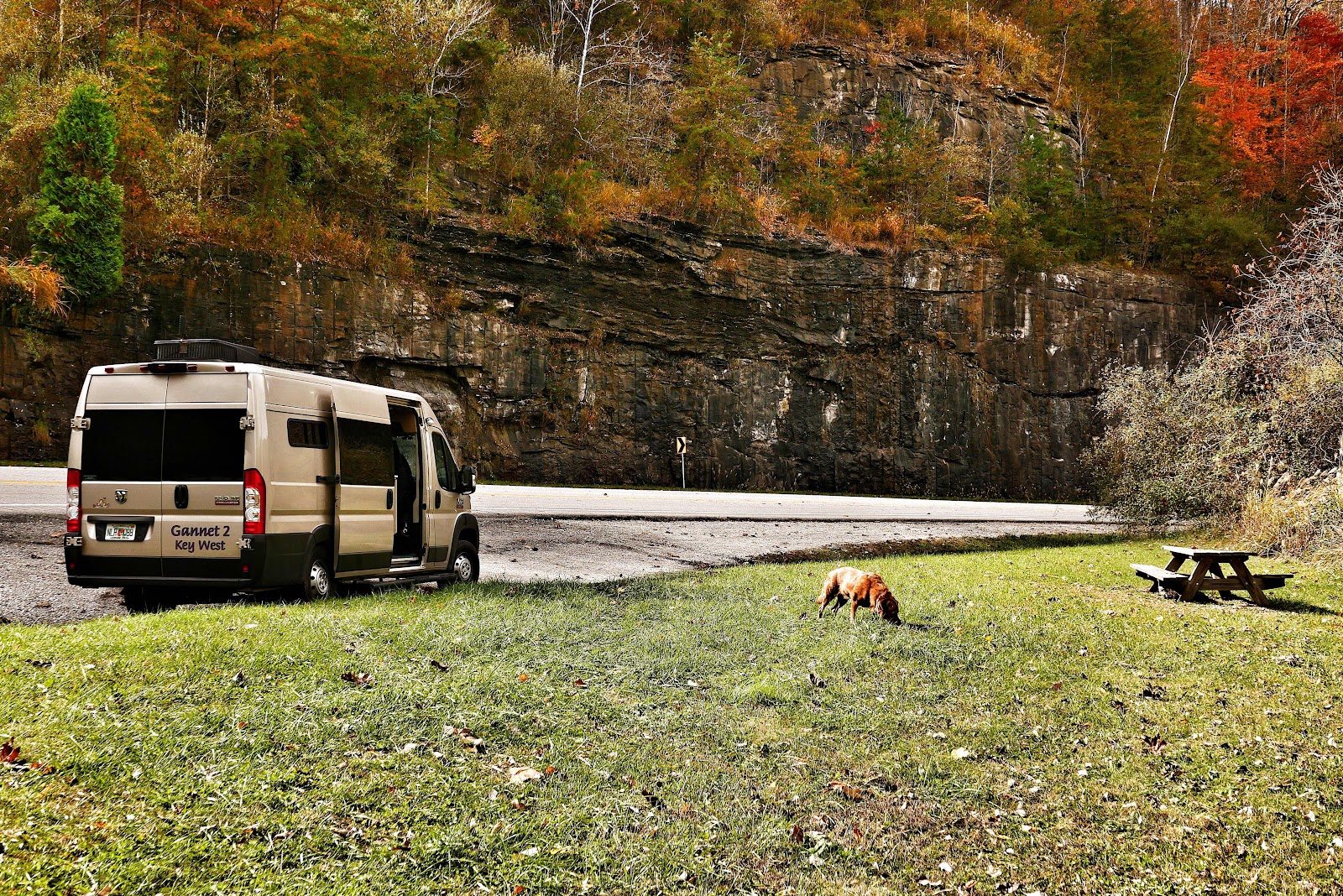 We parked our $90,000 home (with quite a few expensive accessories by now) by the side of the road and admired the rocks and trees and astonishing colors under a sky that alternated between cloudy and sunny but always very windy. It was lovely. Carr lake was in a poor state of desiccation and local attempts to beautify the lakeside resulted in amounts of trash beyond my ability to collect and store. It was everywhere. 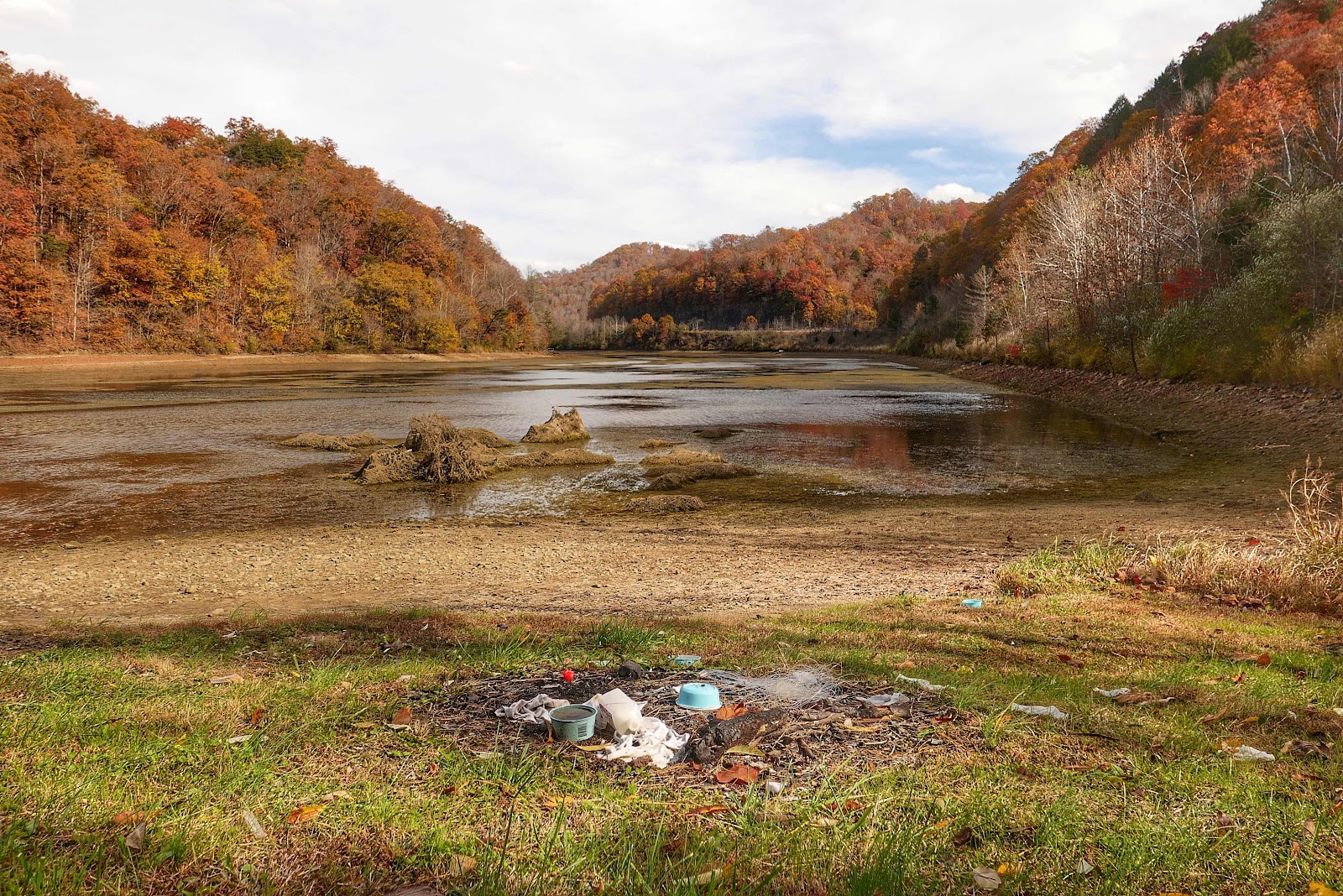 Rusty the non explorer did a good job of joining me and running through the grass and I suspect we both might have wished for higher waters and cleaner land. 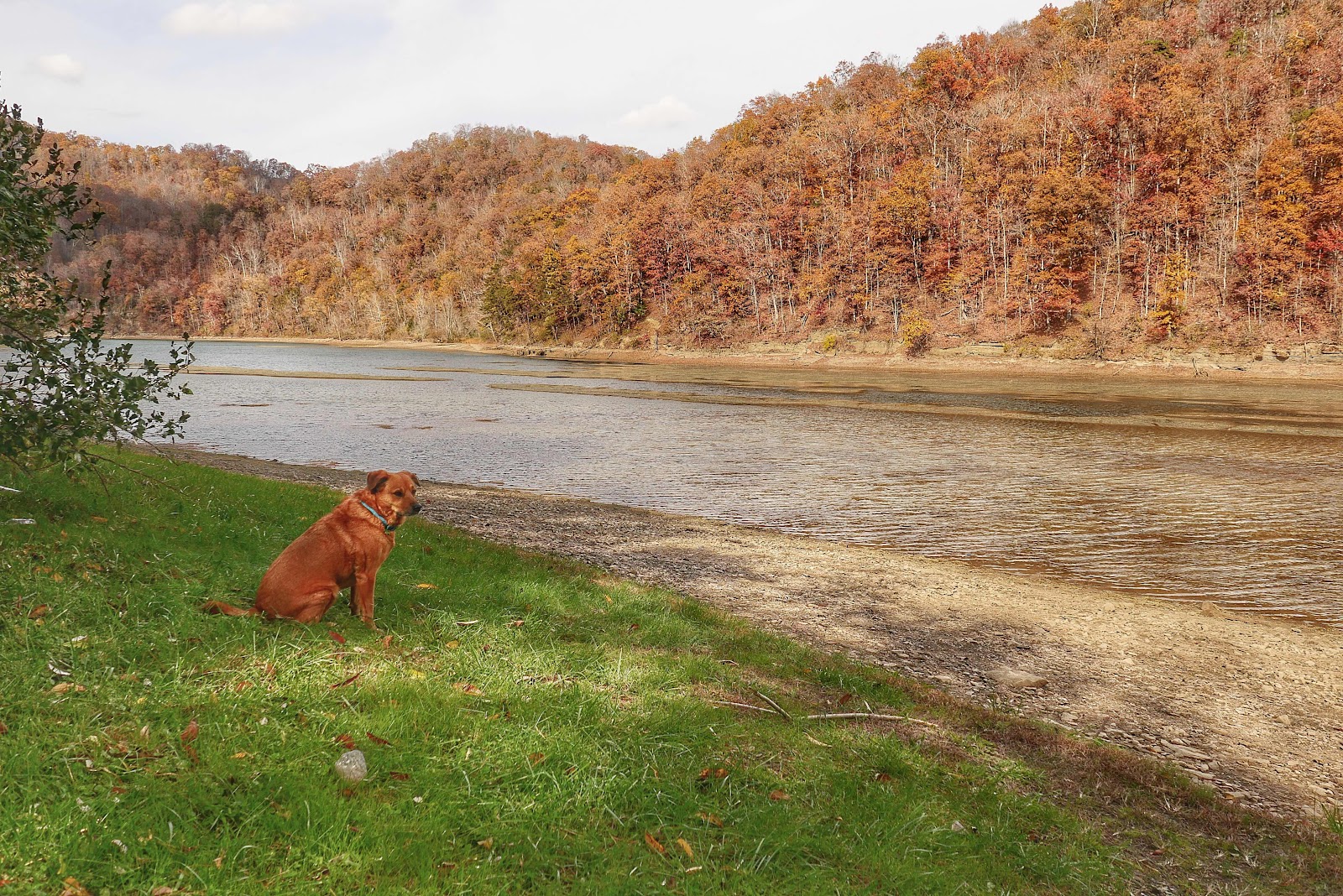 I made a self portrait. Look at me being modern! I am enjoying this weirdly circumscribed life in a van immoderately. The prospect of having no deadlines and being in places remote and unknown gives this part of our retirement the feeling of a prologue, seeing old places and old faces before casting off properly next month. 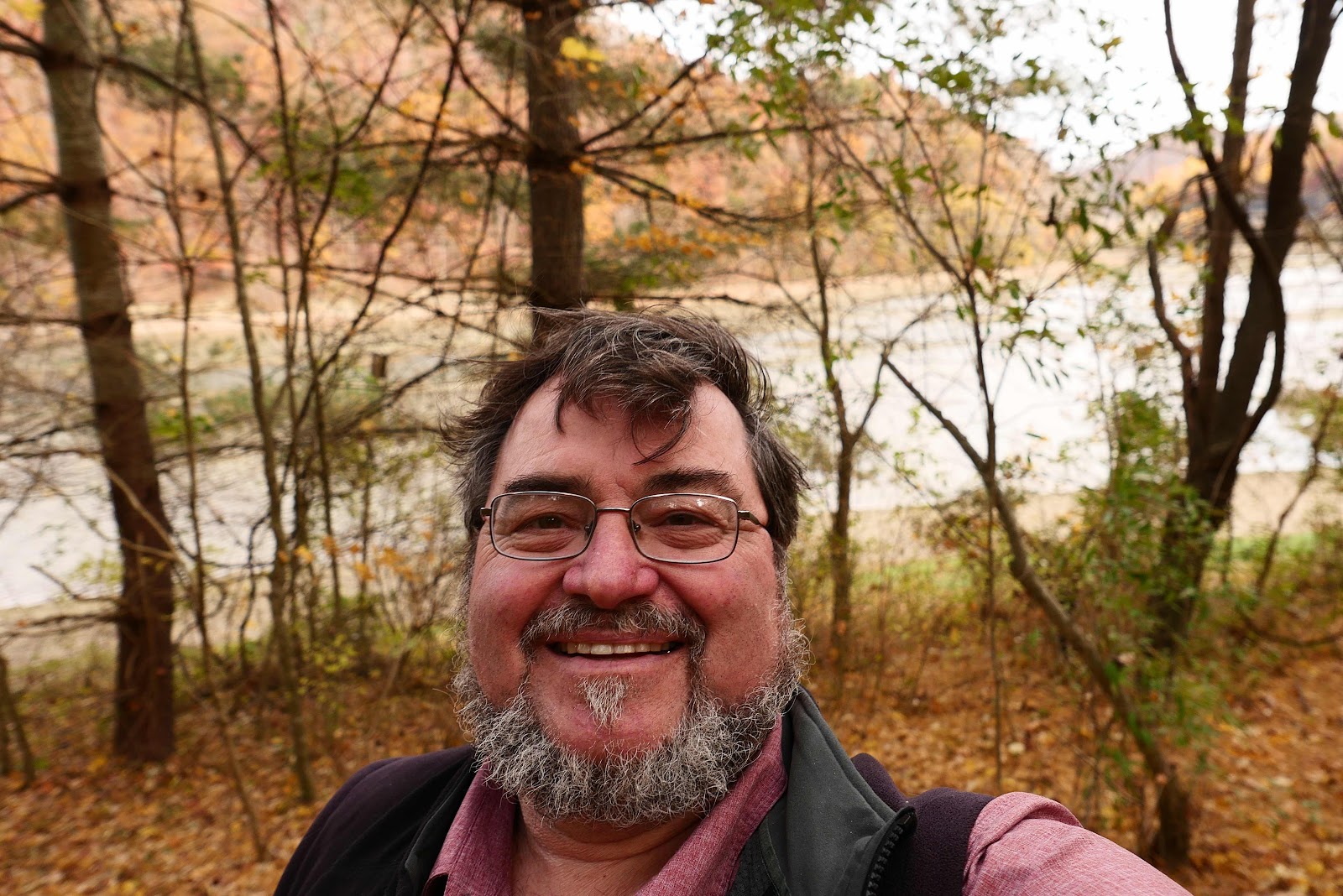 Lunch was ready, our home was as comfortable as ever with the fro t seats turned around we sat at our desks while Rusty stretched out in the grass then jumped up onto our bed when he was ready to sleep. We spent three hours sitting still which I justified by checking tire pressures and fussing with the van a little. 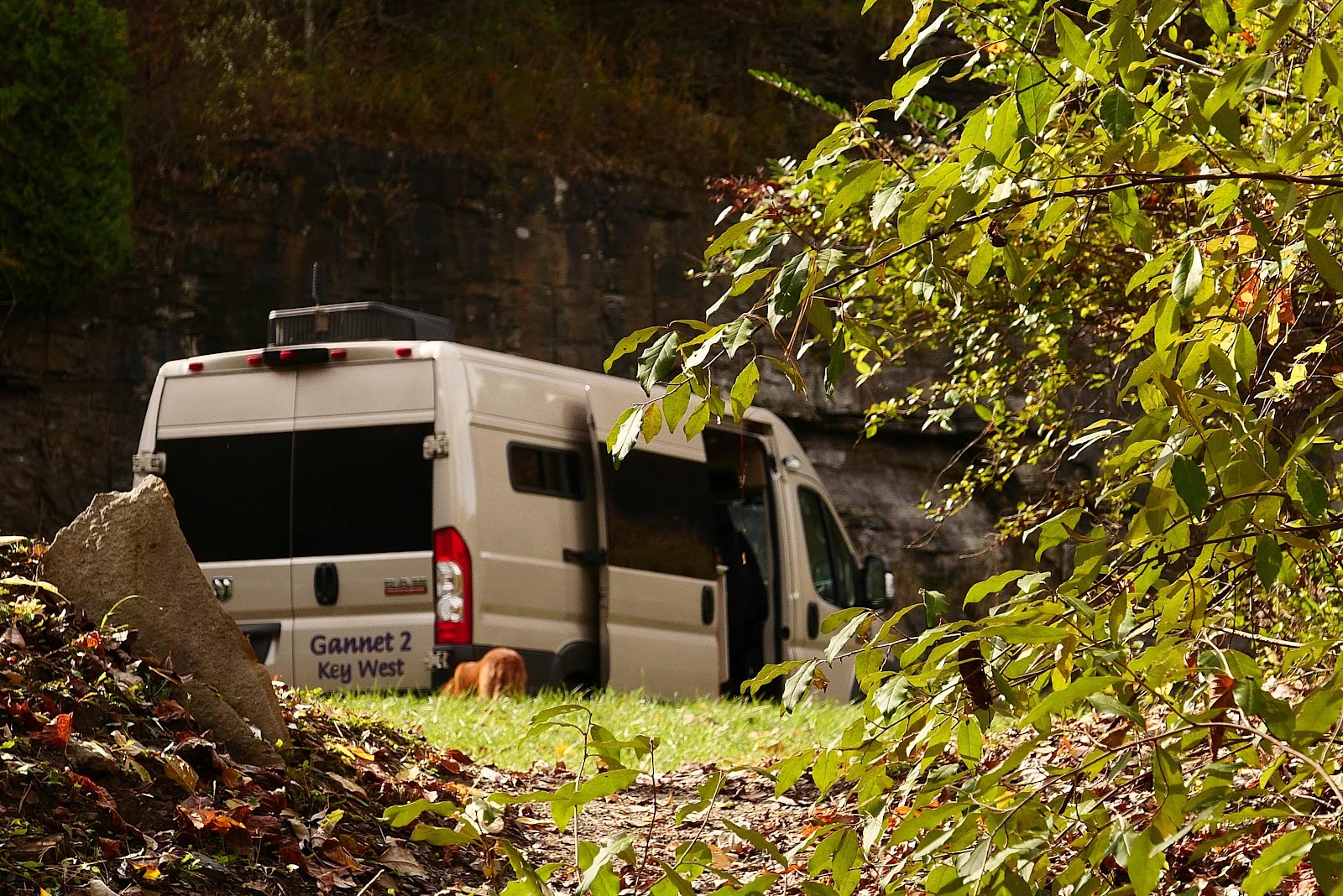 ur nights stop was but 90 minutes away, a whole five slowly driven hours for the day which is nothing for us. We aimed to drive to Slade in the Red River Gorge, a rock climbing center of attraction. Miguel's Pizza kept coming up as a place to eat with camping for climbers only they say. Layne was ready to try it so we set a course for the pizza parlor just 5 minutes from the Slade Rest Area where we planned to spend the night. 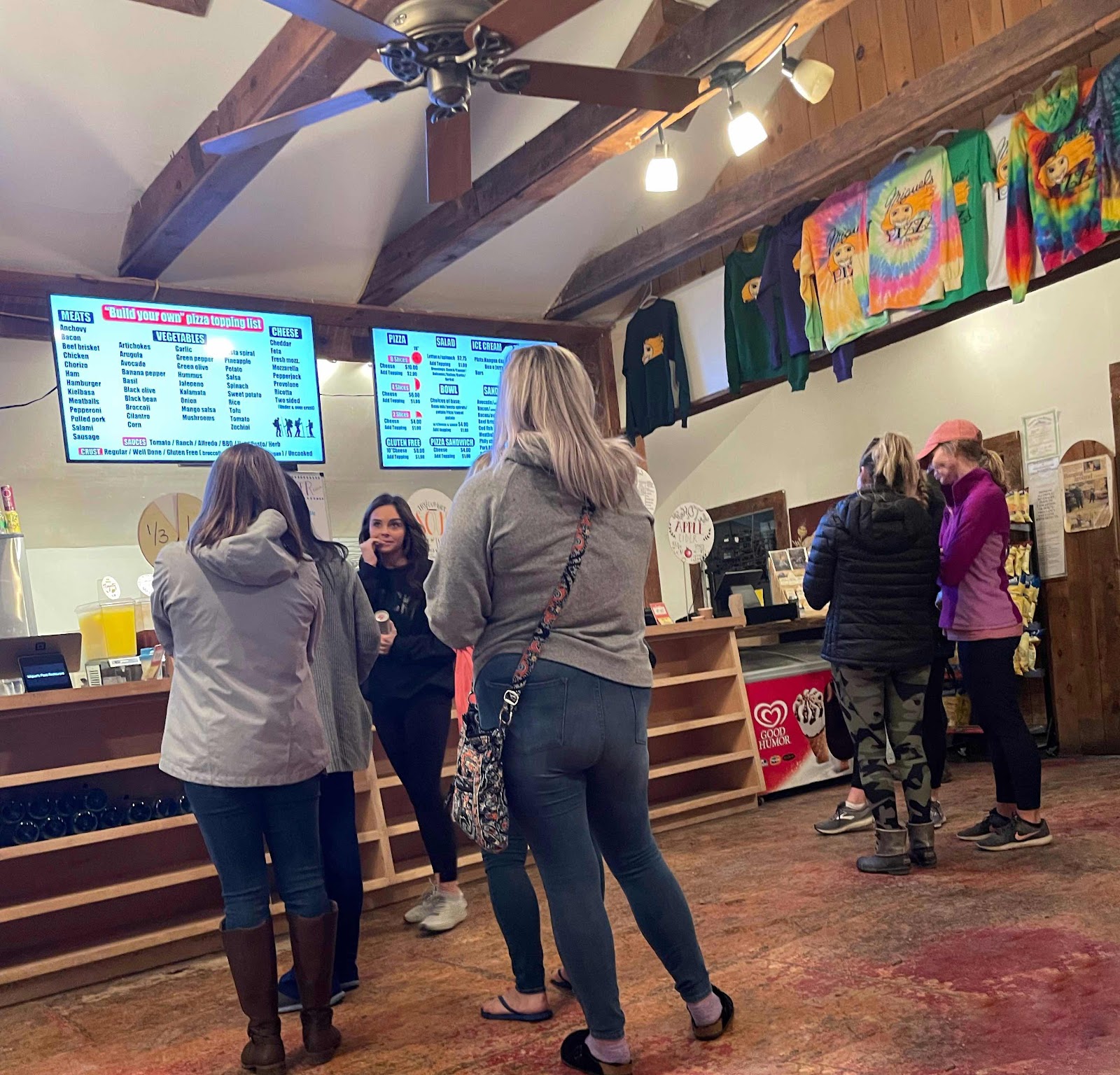 Gray clouds had been building to announce the arrival of a cold front to  send the seventy degree temperatures down into the fifties. The rains rated to pelt down and Layne ordered a ricotta salami and onion pizza off Miguel's vast menu. I splashed across the muddy parking lot underneath an effete polka dotted umbrella, not exactly the picture of a hard core rock climber but it was the best I could do. They, brilliantly had given my custom pizza to some other unfortunate diner so they cut the price in half and baked a fresh pie for me. We solved the difficulty of buying beer in Kentucky (not at the supermarket I discovered from a somewhat frosty checker) because we did not pass a beer store. They sell beer in beer stores in Kentucky which I find rather weird. Perhaps they sell broccoli in broccoli stores such is the difficulty I have with this concept. Anyway  we found our pizza and beer and I wove through the hordes of hard core climber types looking steely eyed and hungry with my thin crust in a large box and we drove way to a small wet parking lot to spend a snug night under the rain with a tired dog and a very good pizza box which had contained a very good thin crust pizza to a dumpster. 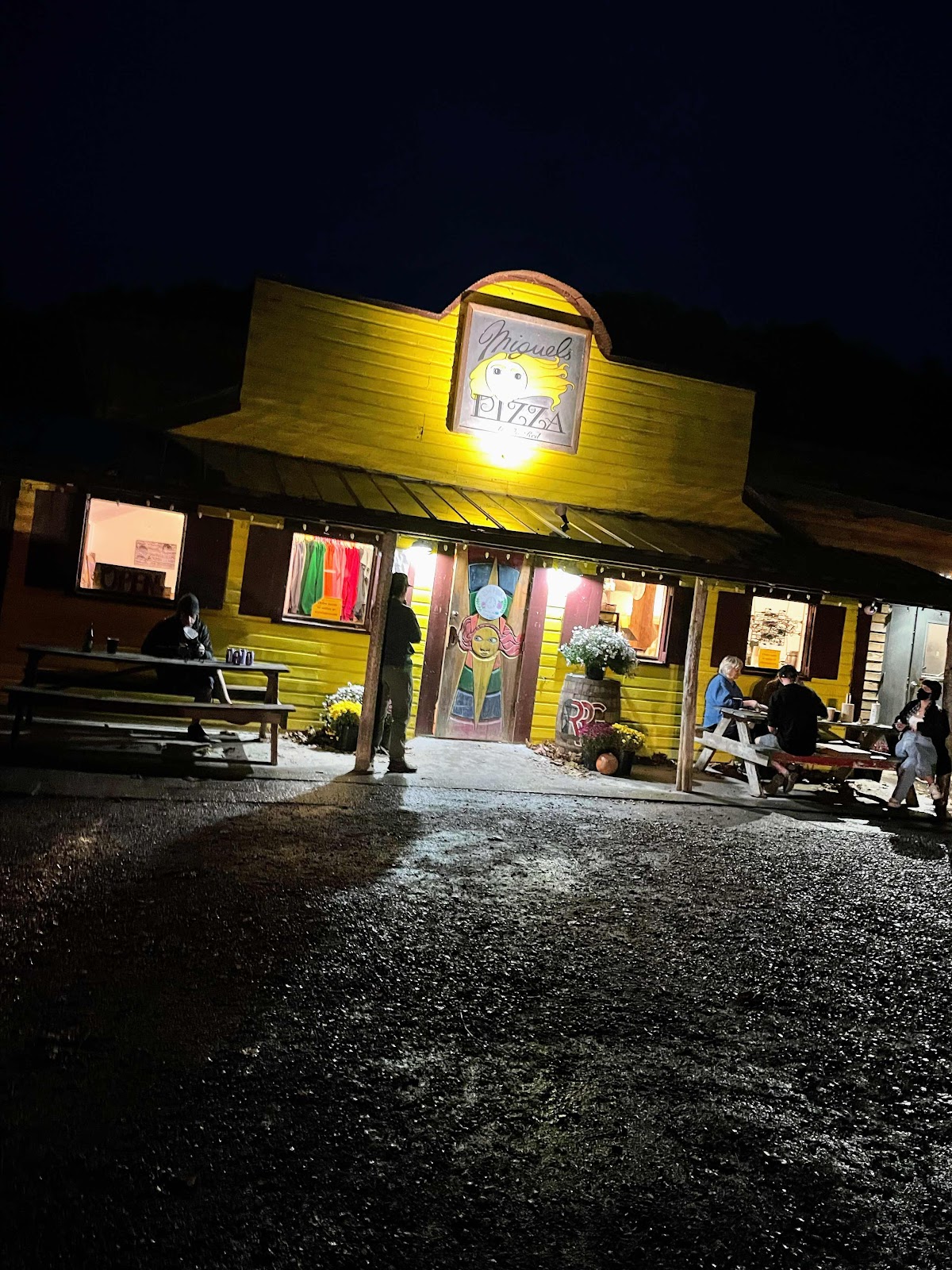 Had we not been traveling by van through the ups and downs of Kentucky hollows we'd never have known climbers love the red River Gorge nor that the gorge even existed nor that there is more to Kentucky than bourbon or Corvettes. Now we know and we can sleep on the knowledge right here at Slade aboard Gannet 2.