It turns out Chrysler Sebrings built in the early part of this century had quite a few engine parts made of plastic where they should have been made of metal according to my wife's mechanic. Thus as she has now gone over a hundred thousand miles, it happens that bits of plastic fail from time. Not that they aren't easy to replace and the plastic parts so far haven't killed the car dead when they failed so we had time to take the car in and get it fixed. Even here in Key West parts are shipped overnight and because we work opposite shifts it's easy to drop each other off while the car gets worked on. The upshot of all this shuffling is Cheyenne and I dropped the wife off early yesterday and we took off for an early walk in the Casa Marina neighborhood while the wife's convertible got a new engine cooling part made of plastic installed under the hood. 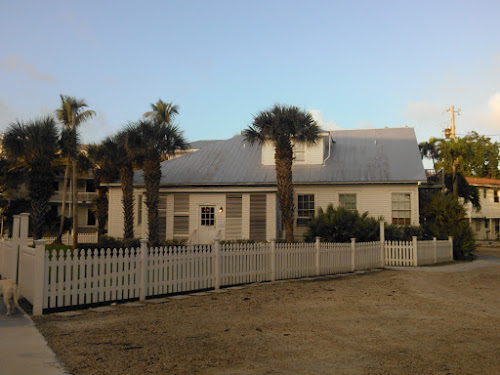 I tend to forget that pink Crocs surprise some people when they see me walking Cheyenne but I'll tell you what, I never fail to be surprised when I see some bloke passing me pounding pedals dressed in a tight fitting banana skin. Or a pair of serious minded joggers dressed for the occasion, also pounding past me as they run, serious minded like a couple of Politburo members planning a putsch. I wonder why people come to Key West and can't get into the proper Key West slouch. 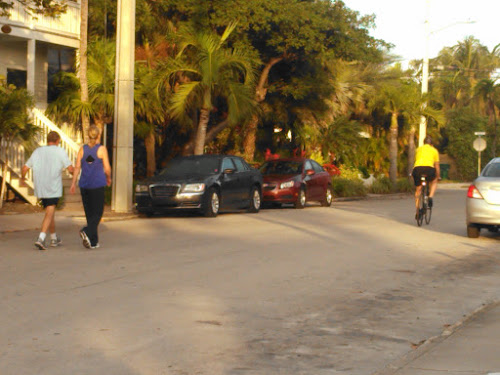 And because I was stumbling slowly behind my dog I got to notice these bizarre leaves, parked in a flowered in front of the coral house on Reynolds Street. 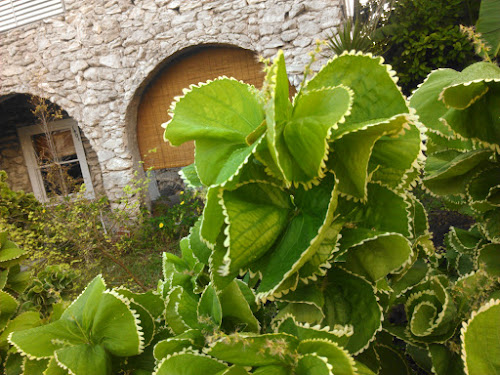 I liked the high wall and intimidating sign protecting the resort guests for the creeps and freak outside the walls. They made me feel quite unwanted with their threats of insecurity and inaccessibility. So I stayed out side with hoi polloi and felt quite secure with no security patrols at all. Clearly there is a lower class of person in e neighborhood as I stumbled across some apparently well worn female underwear in the street. The well disposed among us might imagine they fell from a laundry basket though I feel obliged to point out there are no public laundries nearby. I fear hanky panty was abroad on Seminole Street last night. My shoe is in the lower corner of the frame purely by accident. 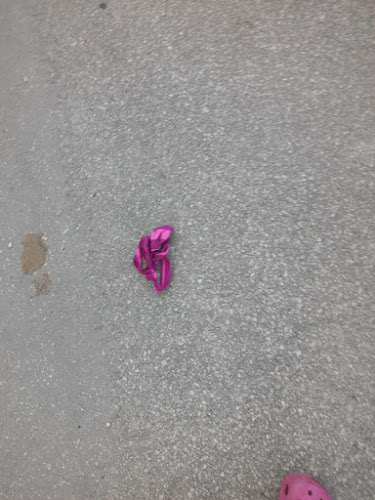 I am not one for adding stickers to my motorcycle but when I spotted a Grateful Dead sticker on this otherwise innocuous scooter I felt I should tell Cheyenne about my old VW van, a vehicle I owned in the people's republic of Santa Cruz many years ago in California. It was covered with similar stickers that refused to yield to my razor blade and everywhere I went, especially at gas stations where hitch hikers congregated, I was approached by dubious characters reeking of cannabis asking me where the next gig was. I went to see the Grateful Dead once at Berkeley's Greek arena but the evening was not a success. The music bored me and the woman I was with was not galvanized as I had been led to believe she might be, and I decided that I liked camping in my funky van though the musical associations were just a nuisance, and made every fill-up an adventure. 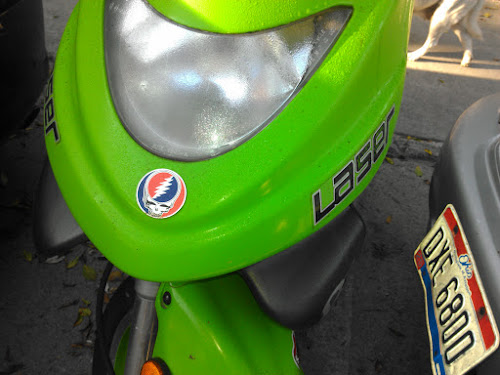 It really was a lovely morning in Key West even though it was muggy and hot as we waited for a non existent cold front to materialize and blow away the dampness in the air. Cheyenne got tired but she wanted to press on and. Enjoy as much of the city's she could so I put her back in the car ad drove her across the Fleming Street by the library and from there we took off through the shadow and light of the leafy cross streets. 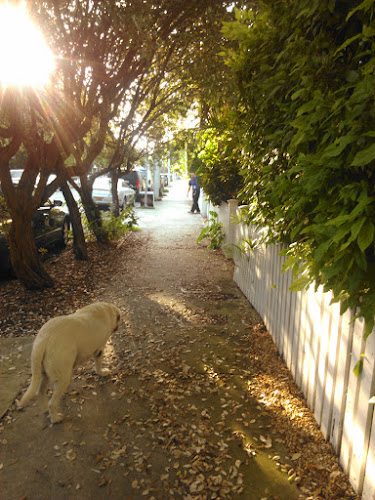 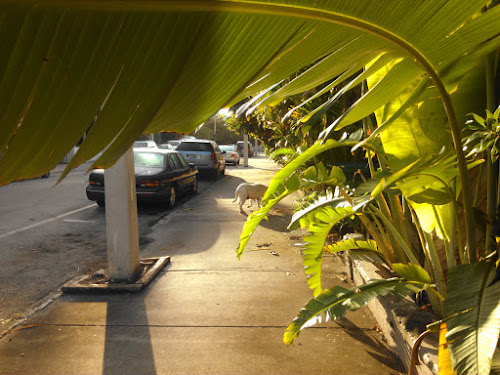 I liked this weird door, worn and beaten up yet still sporting a flashy flamingo panel on top while exhibiting an unpainted temporary/permanent repair at the bottom. 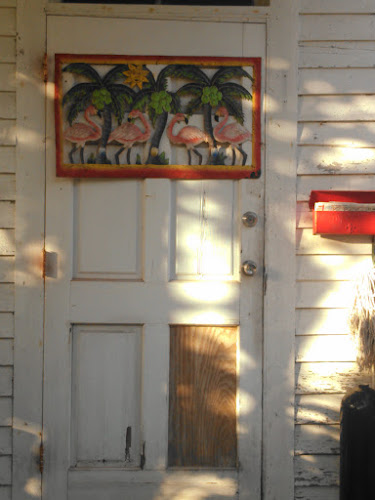 These old style shutters remind me of the ones we had on my childhood home in Italy giving William Street a slightly Mediterranean look. 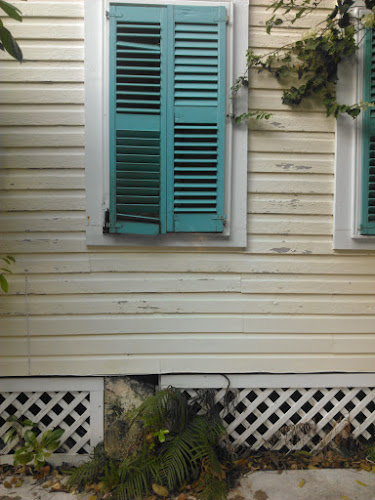 By the time we got home it was laundry day at the manse so I got down to work... 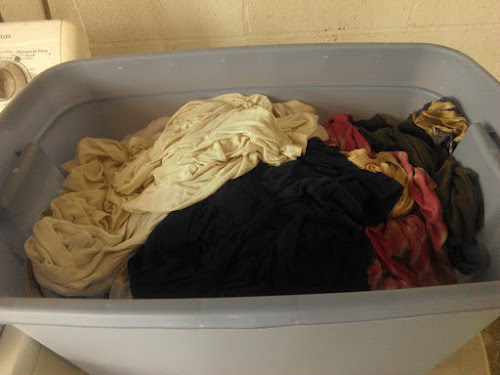 ...while Cheyenne helped. Luckily I have been properly trained in how to hang clothes to dry so Cheyenne's non cooperation didn't hold me up to much. 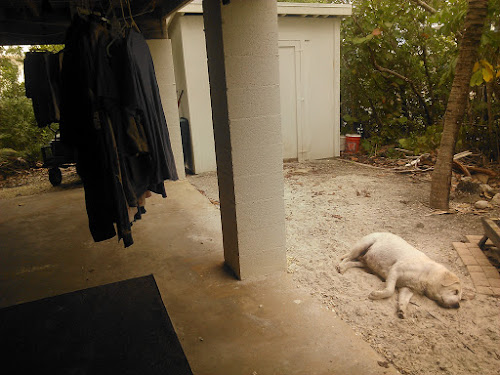 After all a girl needs her beauty sleep after a long walk, a large breakfast and a quick shower to make sure she smells nice after all that hiking. The wife's car is repaired, a cool six hundred bucks but Oily said the plastic parts crumbled in his hand when he went to replace them and now my wife has a car heater again for when temperatures drop below seventy degrees, and the engine as a secure cooling system for when temperatures go above seventy degrees, which is all the time in the engine block. Meanwhile my air cooled motorcycle head is being sent out for new valves and guides. Sigh, it never stops with machinery. Engines should take a leaf out of Cheyenne's book and take a nap from time to time. It does a body good.