Miami seen from the freeway flyover. Lovely isn't it? 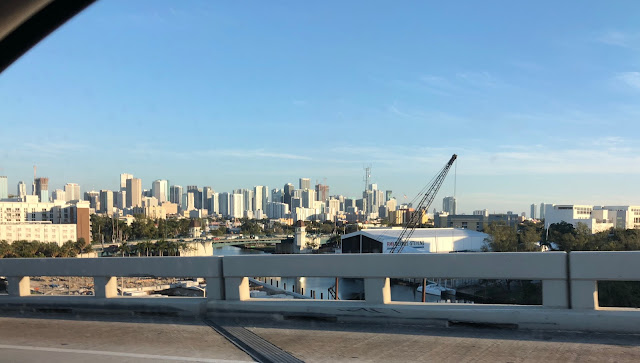 My wife got really mad with Doubletree as their accessible room patently was not. It was a very long way from the elevators. AS she said it was lucky she goes to the gym regularly as anyone less fit would never have been able to push me past the roughly 40 rooms to get to ours. Which, when we arrived had a lovely view of the waterfront which prompted this essay. However I couldn't get out there in my chair and had to transfer to my walker. Had I not had a walker I'd have got no view: 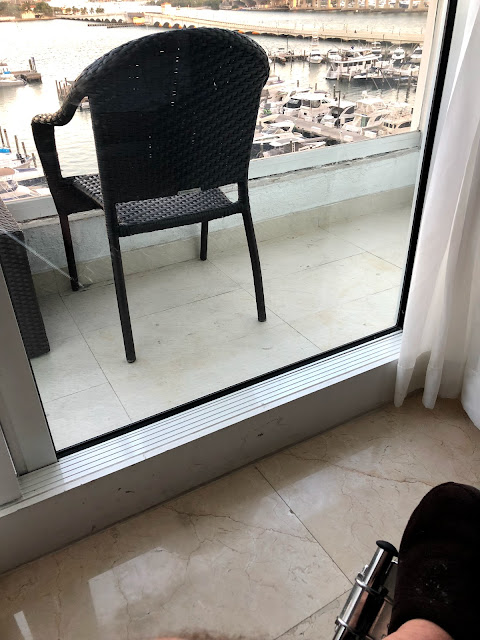 The thing about Miami is that it is a lovely city, full of different and interesting cultures set in  lush  tropical surroundings except the city itself is unapproachable. I don't know why but almost nobody likes Miami. 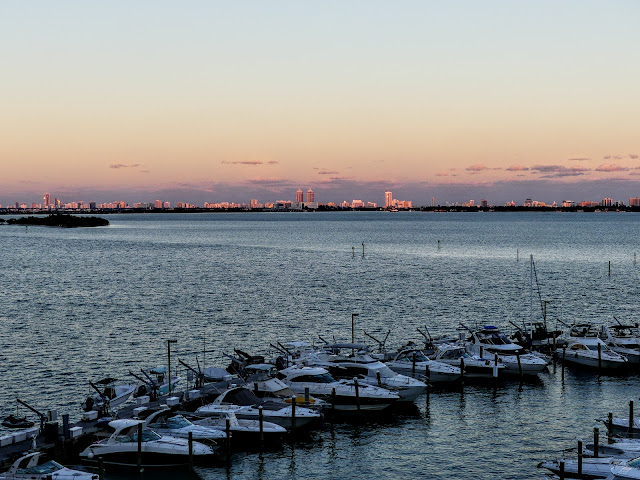 For some haters its the fact that Spanish carries equal weight if not greater weight in some neighborhoods. It can be annoying I know but the compensation for that is the incredible array of foods from all over Latin America in funky first rate hole-in-the-wall eateries. 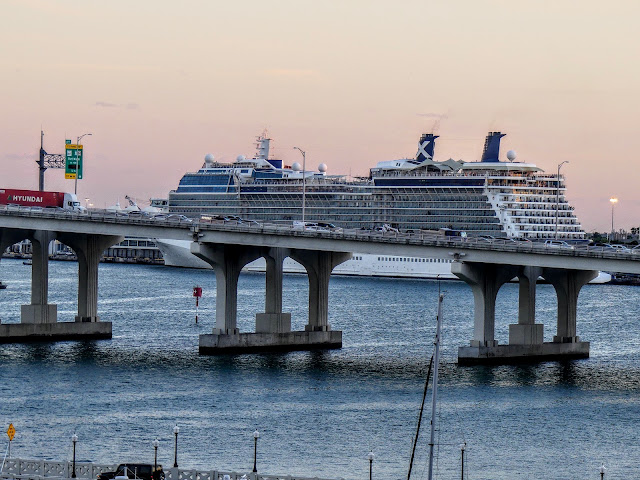 Naturally I was exhausted by the time we arrived at our hotel so we ordered in room service, a mixture of food from Uruguay, Dominican Republic and of course Cuba in various appetizers. 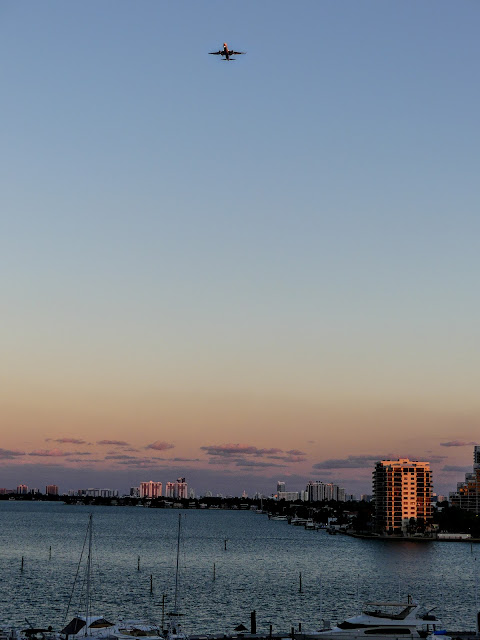 There are museums and performances and everyone loves to call South Florida home in the winter so world class performers show up here when the snow is thick Up North. 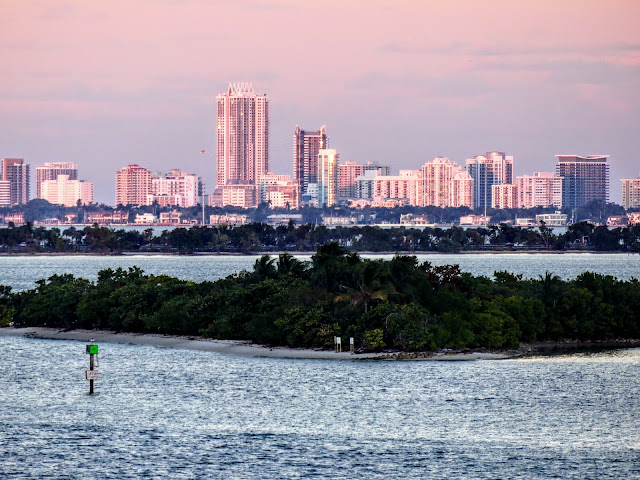 None of it compensates somehow for a city that lacks some essential element that I cannot identify.  Cities all over the world are  full of hustle and aggression and bad manners but somehow much of Miami is the poster child for unpleasant urban living. 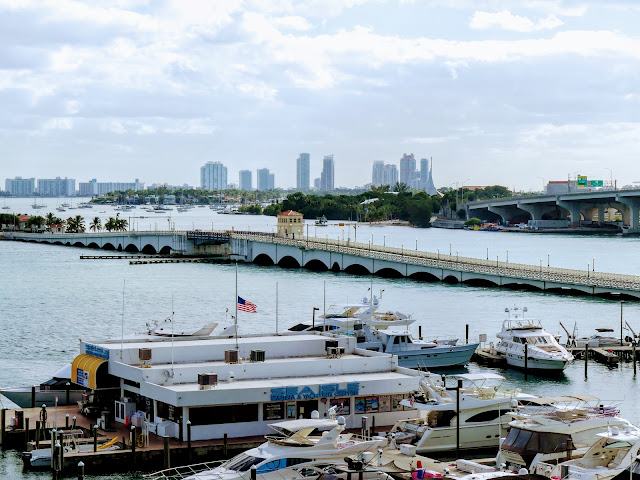 I watched Anthony Bourdain dissect Miami Beach and he made me want to hang there, but he had that knack obviously. Yet when I go to Miami i can't stand the place. I crave Key West. 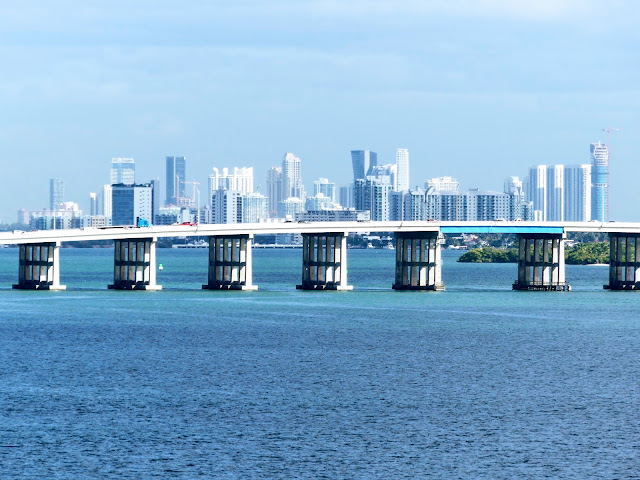 The staff at my rehab were delightful, my landlord is  great guy, compassionate and caring and they all live in the least caring city I know,  a place that makes Los Angeles look like the home of the warm fuzzies. 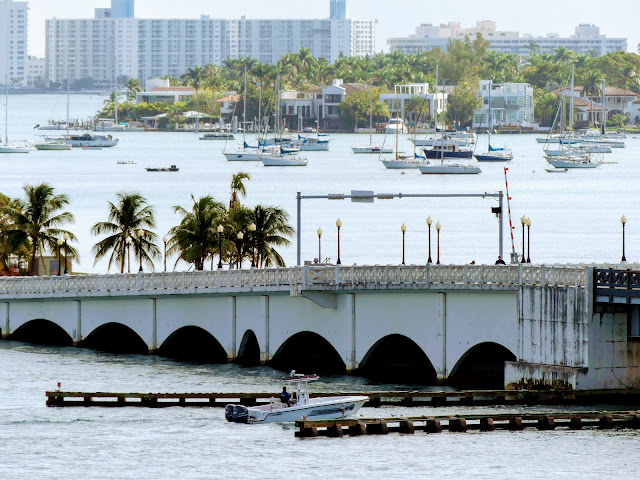 If Miami were a cool town to visit it would elevate life in the Keys too, because this mess of competing corruption and temporary residence is the city that blocks access to the islands. This is where you come for world class medical care, and if you desire, plastic surgery because Miami is the world capital of tacky. 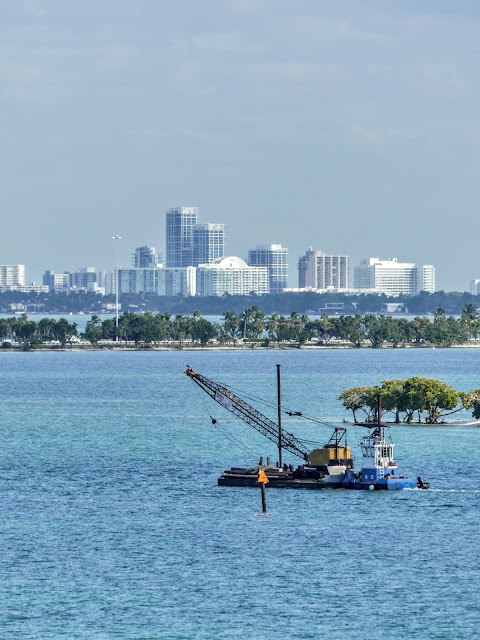 And on a related note I have developed a healthy fear of motorcycling in Miami traffic. They have  a European approach to ignoring the rules which works in Rome but in the US they freak each other out and accidents clog arteries all over the place all the time. My retirement plan is to start all road trips at 2am to get past Miami while the city sleeps. 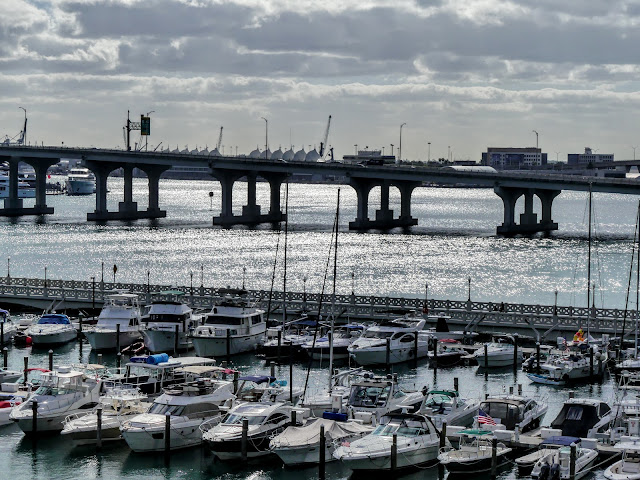 I just stood there and played with my camera and pondered the injustice of such a crappy city occupying such a lovely spot and making itself home to spivs frauds con men and retired Latin power brokers right alongside legitimate  business people from all over the Caribbean basin. 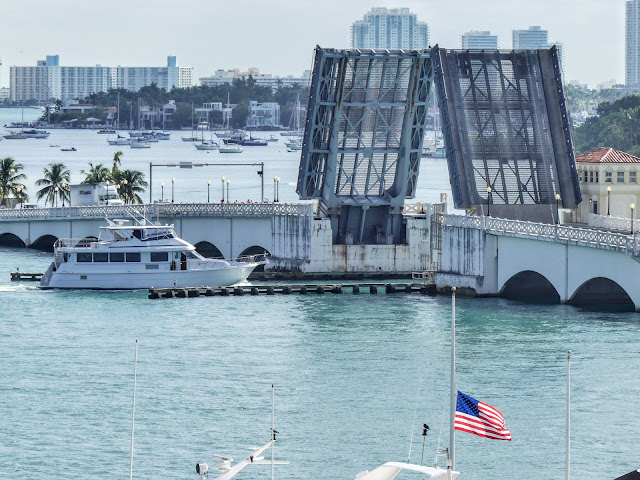 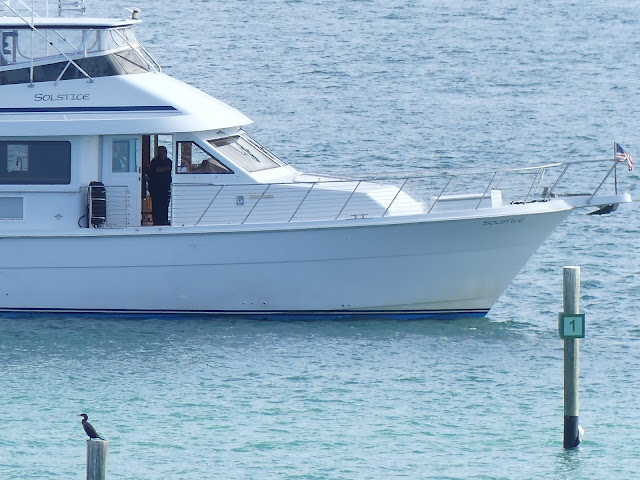 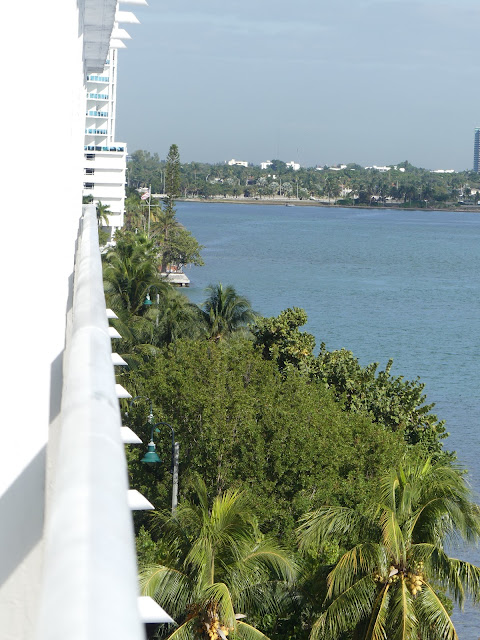 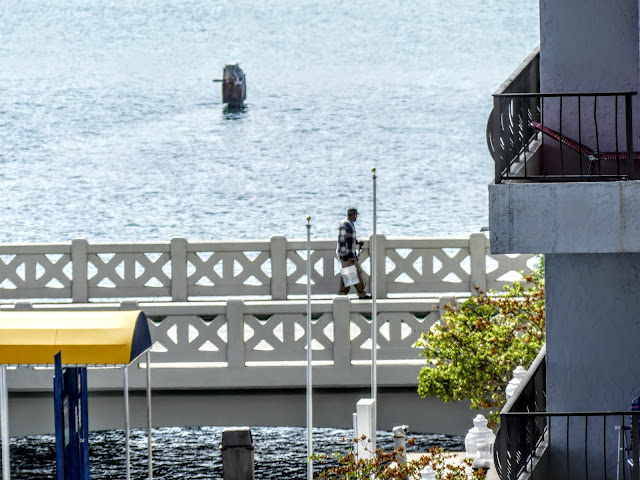 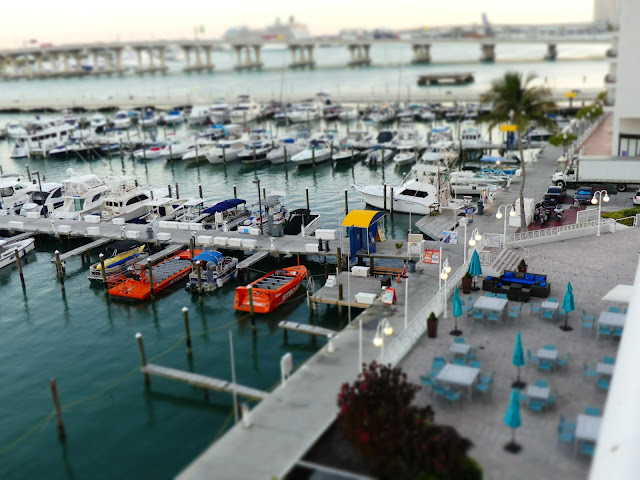 I went to the surgeon's office to get the job done that I came to do, and  got approved for increased locomotion as I continue my path to recovery. 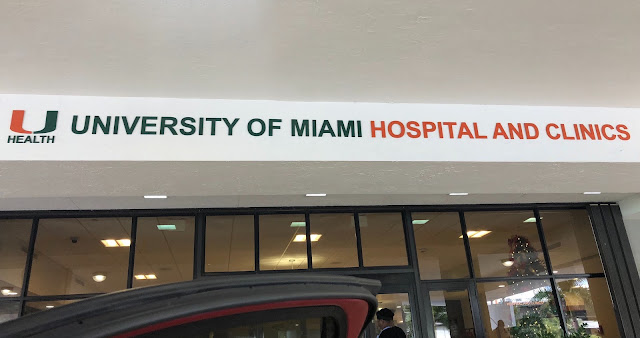 All those broken bones.... 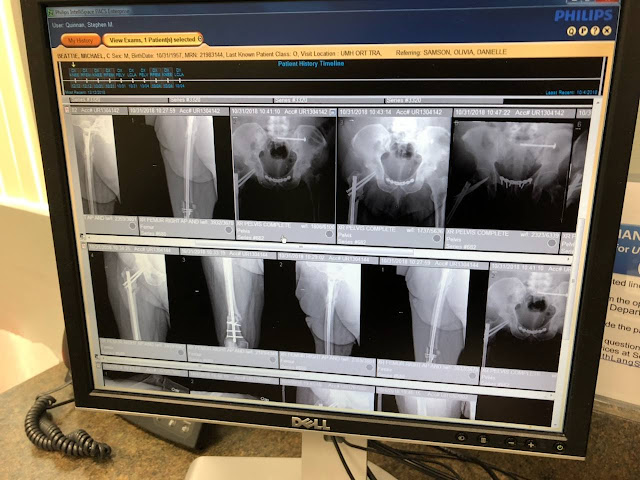 And this useful reminder: 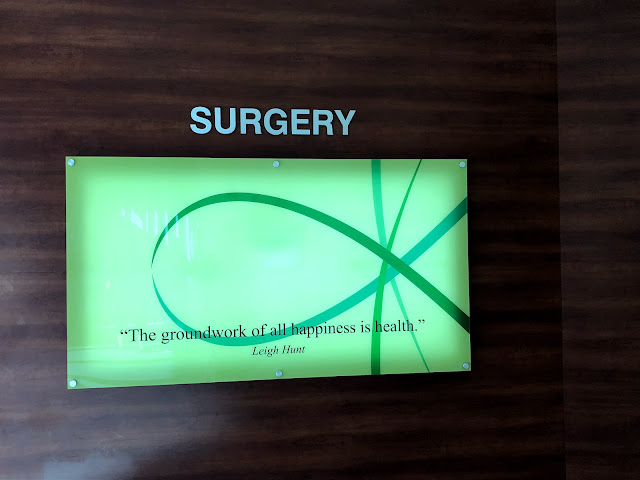