It was almost by accident we noticed the Nao Santa Maria was docked in Key West for a few days while touring North America. Fundacion Nao Victoria is apparently the Spanish not-for-profit that built the ship to celebrate the 525th anniversary of the crossing of the Atlantic by Christopher Columbus. 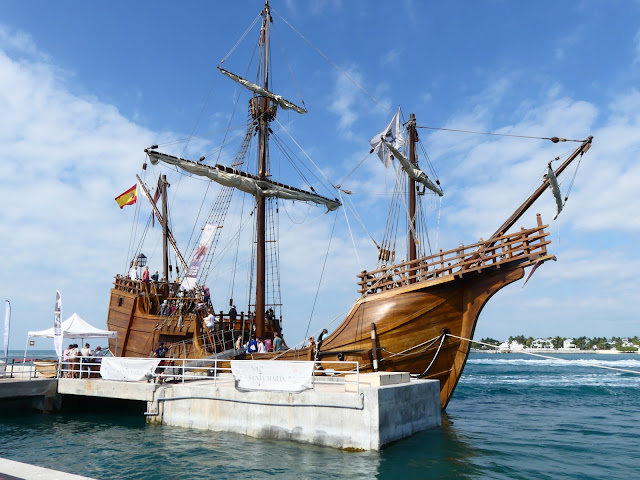 The ship has a website in rather quaint Spanglish, a translation from Spanish by a non-native English speaking committee but the point is they built this fiberglass replica to the original lines and creating the proper look with wood planking. In this way the interior such as it is remains dry while from the outside the ship looks properly wooden. 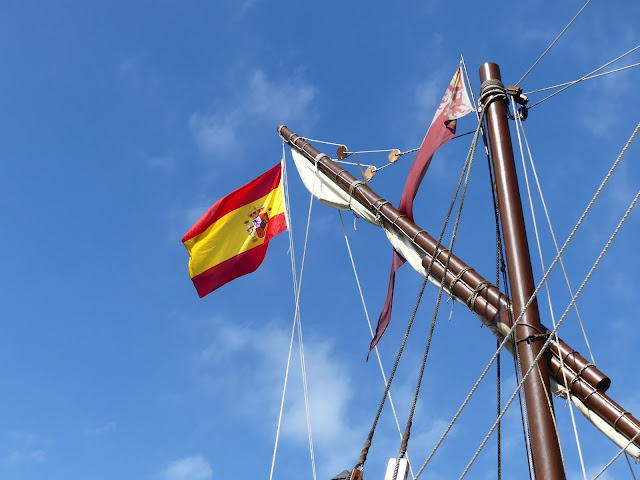 The sailing rig to my untutored eye looks authentic enough though there is also a proper modern diesel engine to help along as needed and I have no doubt there is refrigeration and decent food for the enthusiastic modern young crew. 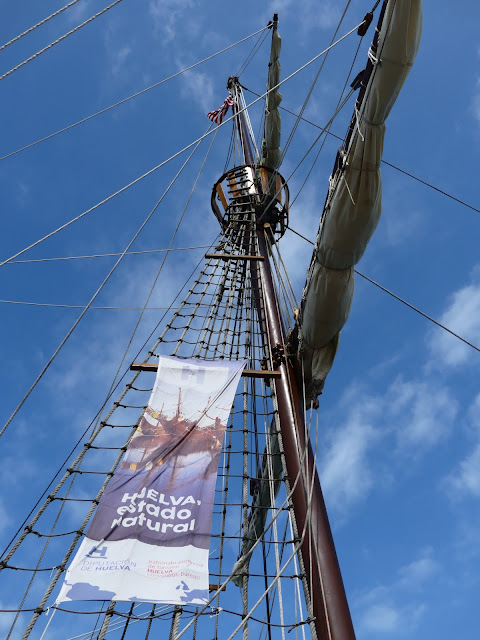 Nevertheless anyone who has an idea the early explorers of the Americas were a bunch of pantywaists will get quite the education wandering around the miniscule spaces on this 100 foot ship, the largest of the three that sailed the ocean blue in 1492. 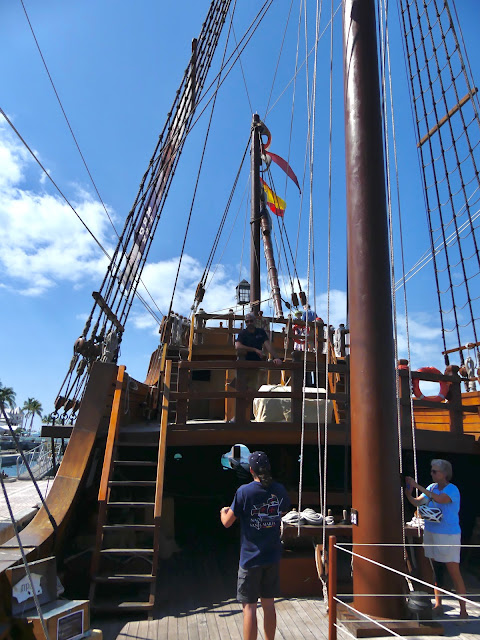 Even in my noted legless state I was able to get around on the sturdy well built steps between decks quite easily though a couple of months ago there would have been no hope I think. 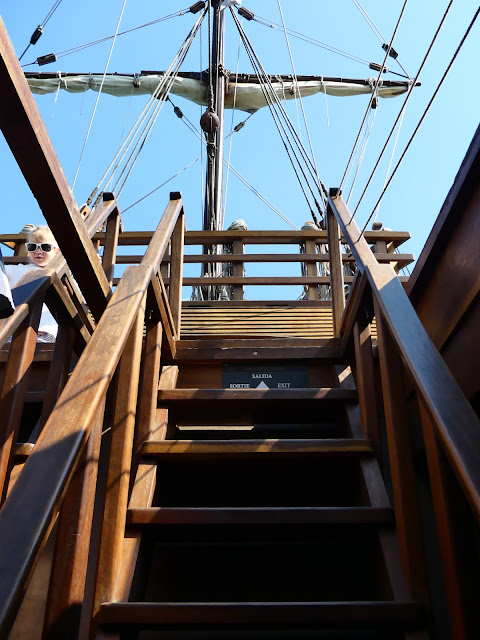 I heard a couple pondering the sole cabin on the ship, the place where the Admiral of the Ocean Sea would have lived during his mutinous crossing to the Bahamas and they thought it looked quite pleasant. I did not bother to point out that the ship regularly rolled 45 degrees in the open ocean and the planking leaked like a sieve and food was rotten meat and bricks of hard biscuit and the water in the barrels stank. 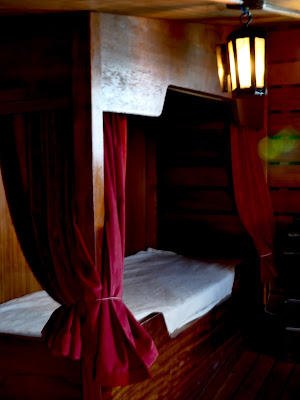 If you read about the intrepid sailors who huddled in the forepeak or slept on the open decks the only reason they were there was to make a fortune and retire somewhere deep inland with their sudden wealth. Sailing was not a bracing sport or a mind expanding form of travel: it was a way out of grinding poverty either by dying or by discovering gold -every Spaniard's dream in the 15th century. 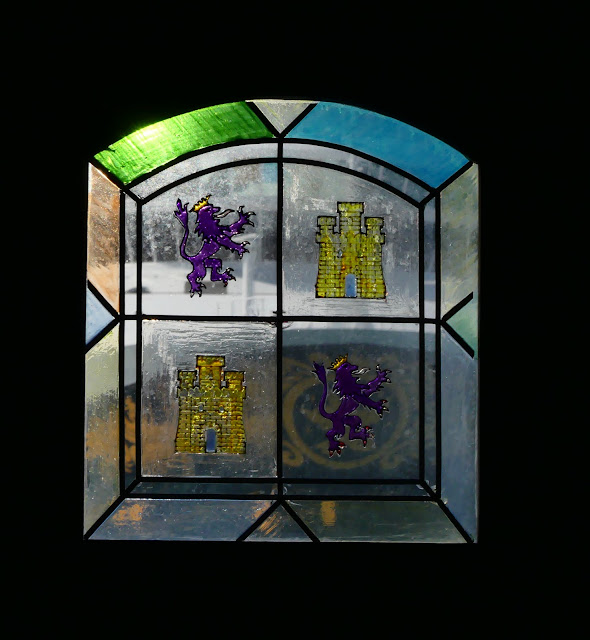 There was a display of various tools used on board five hundred years ago, and that was just in daily living. Navigation was hit or miss especially as they didn't know where they were going. Contrary to popular belief, and in the face of modern imbeciles who seek publicity by saying the Earth is flat, Columbus knew it was round and had a good idea he was heading toward wealth but he thought the money was in India and thought that mystical land a lot closer than in fact it is. That he bumped into the Bahamas first after a long nightmarish voyage of uncertainty did not confuse him because he knew when he set off there was something on the other side of the ocean. And he knew he wasn't going to fall off the edge. So he called them Indians and called his voyage  good and went home. 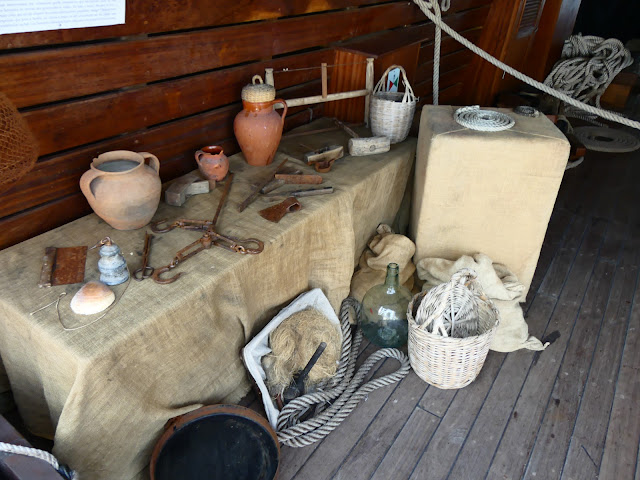 This was their traveling space and the replica gives you a good idea how really small and insignificant their ships were. 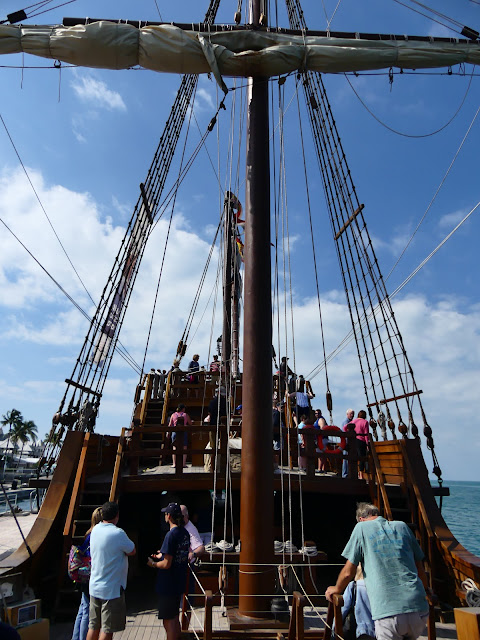 As much as Columbus was a cruel and incompetent administrator his drive for fame and wealth put him squarely in the cross hairs of history and he did what no other southern European had dared to do. That the Vikings had done it all quietly and competently five hundred years earlier on mainland North America doesn't detract in my eyes from his fearless navigation. 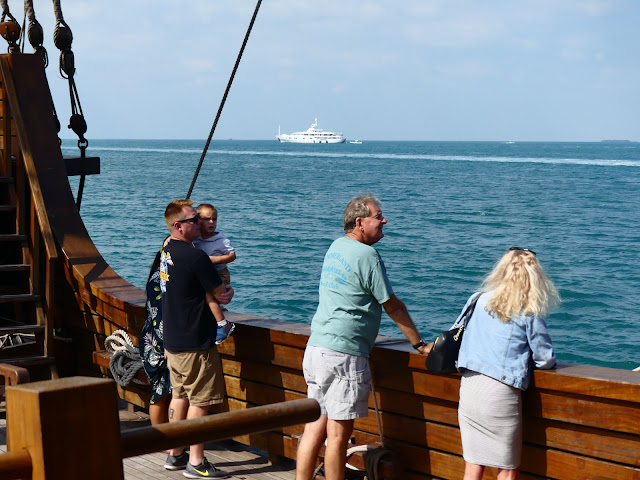 We have modern efficient sailing tools at our disposal today and almost all of us do nothing with them except sail around in very small circles while drinking alcohol and waiting for the sun to set. 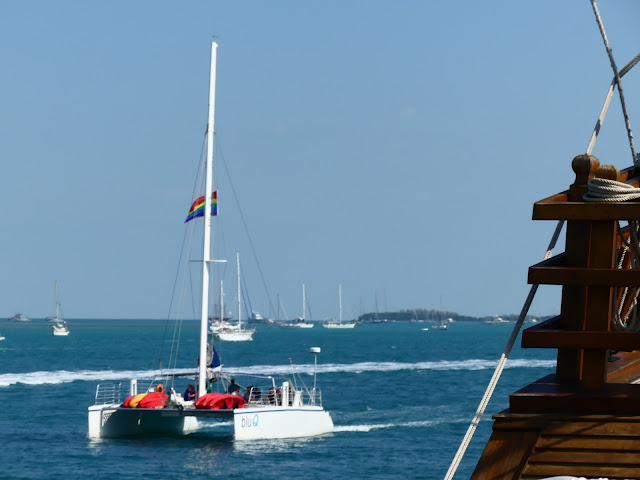 This sort of sailing ship makes you think which is not always a good thing. 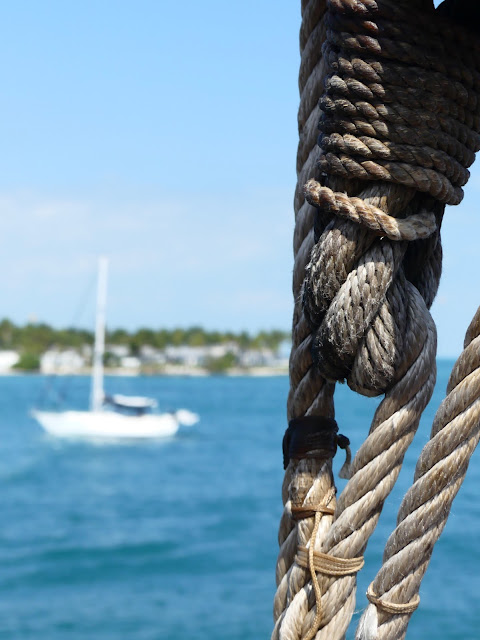 One can't help wondering if we will be viewed as intrepid in another five hundred years because we did so much with so little but I find it hard to imagine that might be the case. 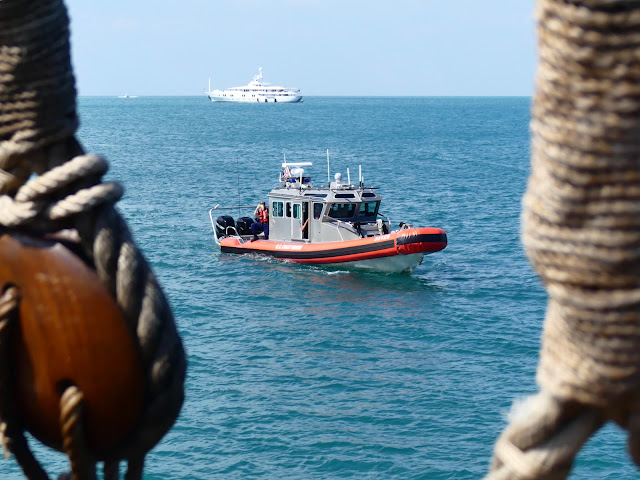 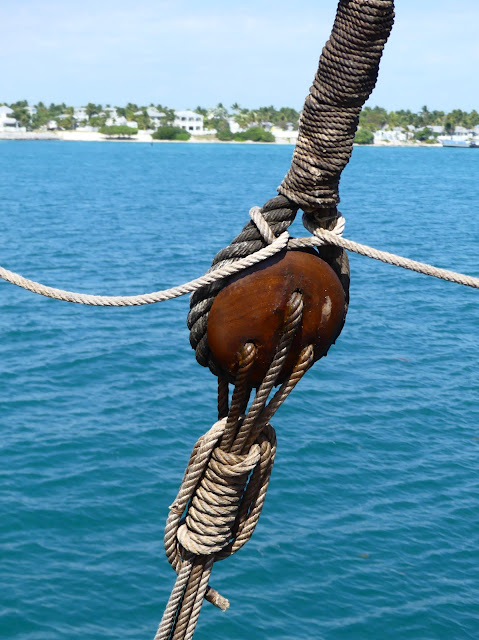 Just yesterday I was reading about a four engined cruise ship that drifted into danger off the Norwegian coast when all four engines packed up at once. A massive rescue operation got underway of course but  a strong storm put the ship in danger of finding itself pushed onshore. In our modern world storms don't stop tourism, as schedules must be maintained in the face of common sense. I suppose you could argue the elderly passengers showed the sort of toughness that might have come in useful on the Santa Maria! 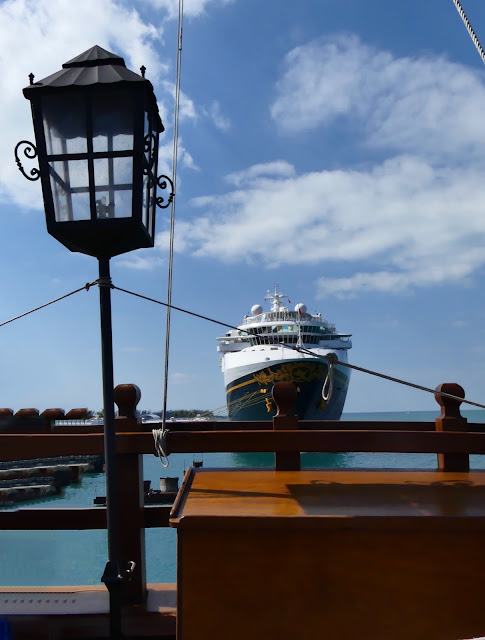 I climbed to the highest deck at the back of the ship and even though we were tied up there was a distinct and decidedly unpleasant rolling sensation that made me slightly queasy. These were ships with rounded hulls and shallow keels and they rolled horribly at sea.  I can't imagine the 24 days it took this boat to cross the Atlantic. 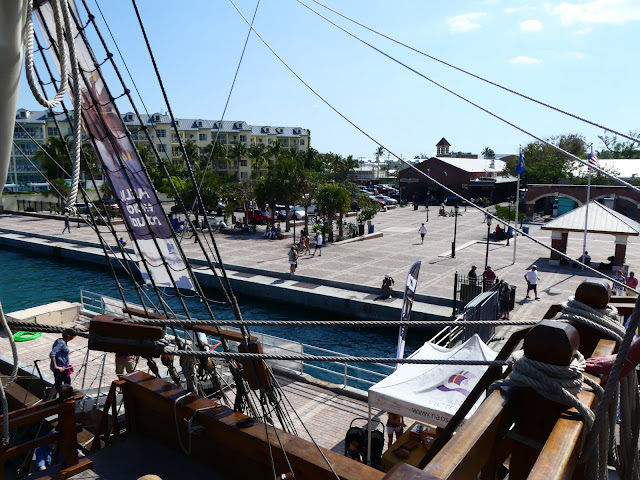 The nature of the wind patterns across the Atlantic made journeys to and from the Americas quite feasible even though the ships could only sail down wind with any kind of efficiency. The Portuguese had been exploring the Atlantic for a long time with colonies set up in Madeira, Cape Verde, and the Azores among other islands and they understood the cyclical nature of the wind patterns. 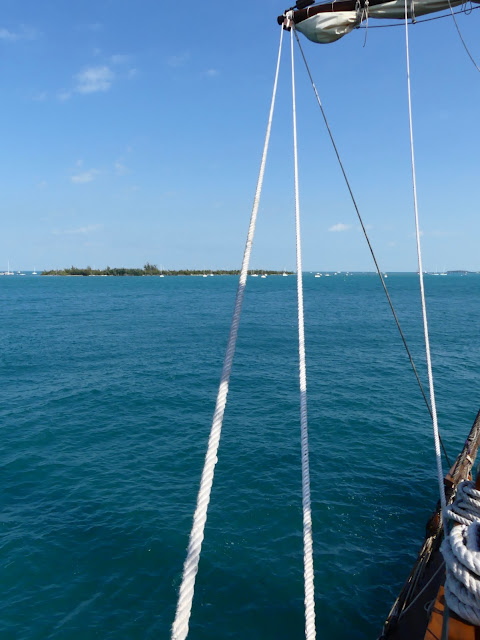 Even today the pattern is used by recreational sailors, crossing to Europe across the North in the spring before hurricane season while crossing to the Americas with a lower arc following the trade winds back west closer to the Equator in early winter. 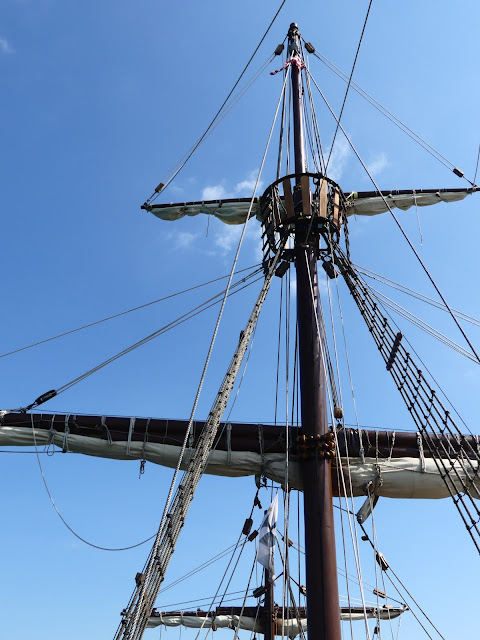 My wife was busy with her phone while I was pondering the misery of life afloat 500 years ago. 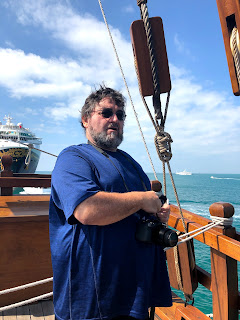 In the photo below the post to the right with the leather loop was called a whipstaff and it was connected to the rudder below decks. Using the staff, held vertically the helmsman steered the boat. Wheels did not come into use for quite a while after the Santa Maria sailed 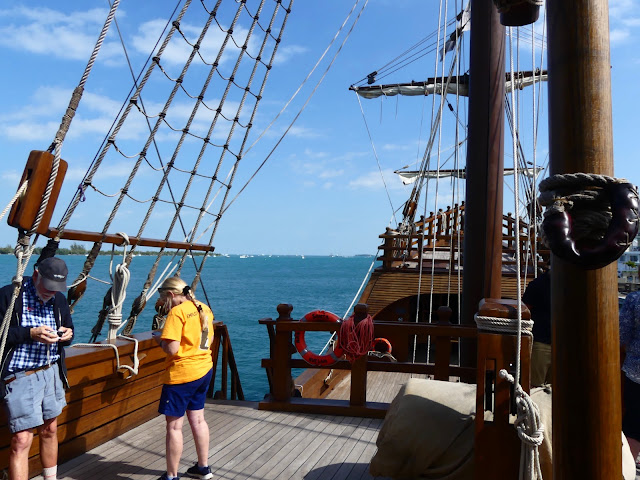 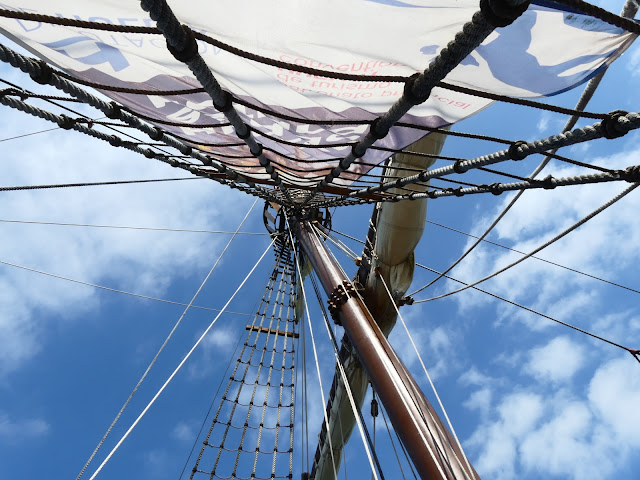 Crew quarters were limited to the space seen below called the forecastle (pronounced foc'sle) where spare sails and rope were stored and turned into temporary bedding for the off watch. 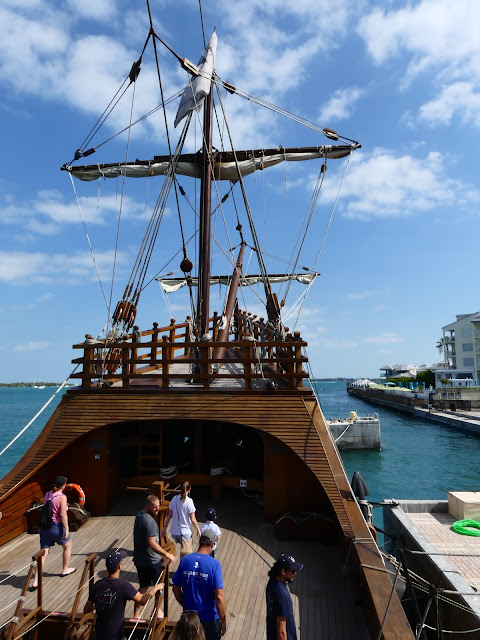 I sneaked a peak at the rudder and played with the image of the distant ship. It was a fabulous tour, but in our pansy world I had my Saturday exercise class ("Aging Boldly!") to attend  and we feeble modern office rats had to run off the ship back to our air conditioned car and abundant nourishing rations. Thank Heavens for modern life! 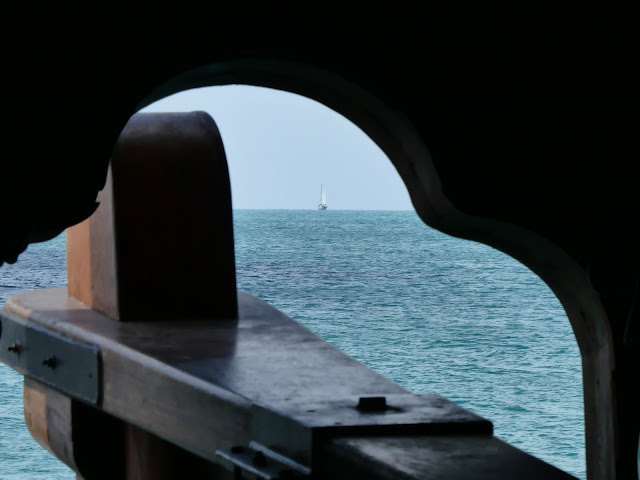 Of course not everyone goes mainstream in this rat race and for visitors to Mallory Square there was the usual assemblage of characters, let's be generous, passing the time of day more or less squalidly in a way that Columbus' sailors might have understood and even appreciated. 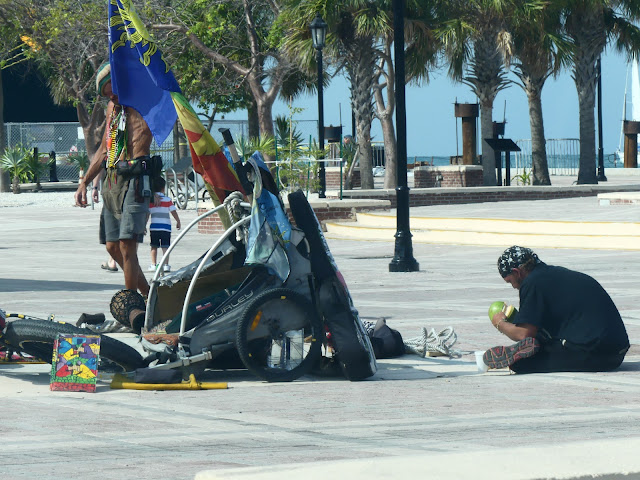 Twenty dollars well spent for an hour of wandering and thinking and being grateful.
Posted by Conchscooter at 12:00 AM 1 comment: