My wife at work, myself and Cheyenne off, we decided to get in the car and drive North.

Over the years I have covered most of the peninsula in criss-crossing trips by motorcycle and by car and of sights to see there aren't many left in Florida. So it is one is faced with a five hundred mile journey to Jacksonville or an 800 mile ride to Pensacola just to get out of the Sunshine State.

It is a long way out from the Southernmost City, most of it across flatlands, some rolling hills and eventually through sandy pine forests in the central and northern regions.

Cheyenne is a patient rider slumped across the back seat of the Fusion, she doesn't much care for long car drives but she puts up with them in the hope of better things to come.

Pine forests seem to appeal more to me than to her.

She'd much rather be sniffing trash on some urban backstreet and my efforts to stretch her legs in sylvan surroundings don't do much for her.

The ride took the better part of 24 hours with an enforced stop in a seedy motel to recuperate from exhaustion as the drive was preceded by twelve hours of night shift at work.

Destination Roanoke, to be explored this week.

Posted by Conchscooter at 6:00 PM No comments: Links to this post

Lawrence of Arabia by Motorcycle

I have long enjoyed the writing of T.E. Lawrence and have wanted to re-publish his most famous piece of motorcycle writing, The Road. Here it is again: 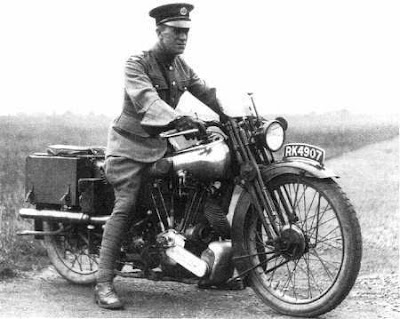 This excerpt from T.E Lawrence's book The Mint has been floating around in my head since I read it on the vintagent's site ( see my web list http://www.thevintagent.blogspot.com/ ) and Paul d'Orlean's superb website reminded me of this fine piece of writing. For more from the book and articles about the man known to most as "Lawrence of Arabia" check out this site: http://telawrence.info/telawrenceinfo/index.htm . My 2007 Triumph Bonneville is nothing like Lawrence's Brough Superior, nor am I in any way like Lawrence himself but across the arc of a century one might say we both enjoy the ride and he wrote about it better than ever I could.

The extravagance in which my surplus emotion expressed itself lay on the road. So long as roads were tarred blue and straight; not hedged; and empty and dry, so long I was rich. Nightly I'd run up from the hangar, upon the last stroke of work, spurring my tired feet to be nimble. The very movement refreshed them, after the day-long restraint of service. In five minutes my bed would be down, ready for the night: in four more I was in breeches and puttees, pulling on my gauntlets as I walked over to my bike, which lived in a garage-hut, opposite. Its tyres never wanted air, its engine had a habit of starting at second kick: a good habit, for only by frantic plunges upon the starting pedal could my puny weight force the engine over the seven atmospheres of its compression.

Boanerges' first glad roar at being alive again nightly jarred the huts of Cadet College into life. 'There he goes, the noisy bugger,' someone would say enviously in every flight. It is part of an airman's profession to be knowing with engines: and a thoroughbred engine is our undying satisfaction. The camp wore the virtue of my Brough like a flower in its cap. Tonight Tug and Dusty came to the step of our hut to see me off. 'Running down to Smoke, perhaps?' jeered Dusty; hitting at my regular game of London and back for tea on fine Wednesday afternoons.

Boa is a top-gear machine, as sweet in that as most single-cylinders in middle. I chug lordlily past the guard-room and through the speed limit at no more than sixteen. Round the bend, past the farm, and the way straightens. Now for it. The engine's final development is fifty-two horse-power. A miracle that all this docile strength waits behind one tiny lever for the pleasure of my hand.

Another bend: and I have the honour of one of England' straightest and fastest roads. The burble of my exhaust unwound like a long cord behind me. Soon my speed snapped it, and I heard only the cry of the wind which my battering head split and fended aside. The cry rose with my speed to a shriek: while the air's coldness streamed like two jets of iced water into my dissolving eyes. I screwed them to slits, and focused my sight two hundred yards ahead of me on the empty mosaic of the tar's gravelled undulations. 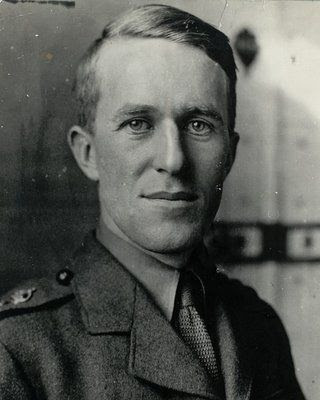 Like arrows the tiny flies pricked my cheeks: and sometimes a heavier body, some house-fly or beetle, would crash into face or lips like a spent bullet. A glance at the speedometer: seventy-eight. Boanerges is warming up. I pull the throttle right open, on the top of the slope, and we swoop flying across the dip, and up-down up-down the switchback beyond: the weighty machine launching itself like a projectile with a whirr of wheels into the air at the take-off of each rise, to land lurchingly with such a snatch of the driving chain as jerks my spine like a rictus.

Once we so fled across the evening light, with the yellow sun on my left, when a huge shadow roared just overhead. A Bristol Fighter, from Whitewash Villas, our neighbour aerodrome, was banking sharply round. I checked speed an instant to wave: and the slip-stream of my impetus snapped my arm and elbow astern, like a raised flail. The pilot pointed down the road towards Lincoln. I sat hard in the saddle, folded back my ears and went away after him, like a dog after a hare. Quickly we drew abreast, as the impulse of his dive to my level exhausted itself.

The next mile of road was rough. I braced my feet into the rests, thrust with my arms, and clenched my knees on the tank till its rubber grips goggled under my thighs. Over the first pot-hole Boanerges screamed in surprise, its mud-guard bottoming with a yawp upon the tyre. Through the plunges of the next ten seconds I clung on, wedging my gloved hand in the throttle lever so that no bump should close it and spoil our speed. Then the bicycle wrenched sideways into three long ruts: it swayed dizzily, wagging its tail for thirty awful yards. Out came the clutch, the engine raced freely: Boa checked and straightened his head with a shake, as a Brough should.

The bad ground was passed and on the new road our flight became birdlike. My head was blown out with air so that my ears had failed and we seemed to whirl soundlessly between the sun-gilt stubble fields. I dared, on a rise, to slow imperceptibly and glance sideways into the sky. There the Bif was, two hundred yards and more back. Play with the fellow? Why not? I slowed to ninety: signalled with my hand for him to overtake. Slowed ten more: sat up. Over he rattled. His passenger, a helmeted and goggled grin, hung out of the cock-pit to pass me the 'Up yer' Raf randy greeting.

They were hoping I was a flash in the pan, giving them best. Open went my throttle again. Boa crept level, fifty feet below: held them: sailed ahead into the clean and lonely country. An approaching car pulled nearly into its ditch at the sight of our race. The Bif was zooming among the trees and telegraph poles, with my scurrying spot only eighty yards ahead. I gained though, gained steadily: was perhaps five miles an hour the faster. Down went my left hand to give the engine two extra dollops of oil, for fear that something was running hot: but an overhead Jap twin, super-tuned like this one, would carry on to the moon and back, unfaltering.

We drew near the settlement. A long mile before the first houses I closed down and coasted to the cross-roads by the hospital. Bif caught up, banked, climbed and turned for home, waving to me as long as he was in sight. Fourteen miles from camp, we are, here: and fifteen minutes since I left Tug and Dusty at the hut door.

I let in the clutch again, and eased Boanerges down the hill along the tram-lines through the dirty streets and up-hill to the aloof cathedral, where it stood in frigid perfection above the cowering close. No message of mercy in Lincoln. Our God is a jealous God: and man's very best offering will fall disdainfully short of worthiness, in the sight of Saint Hugh and his angels. 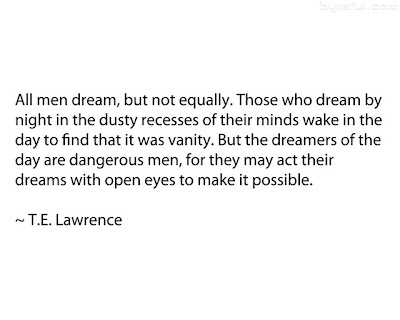 Remigius, earthy old Remigius, looks with more charity on and Boanerges. I stabled the steel magnificence of strength and speed at his west door and went in: to find the organist practising something slow and rhythmical, like a multiplication table in notes on the organ. The fretted, unsatisfying and unsatisfied lace-work of choir screen and spandrels drank in the main sound. Its surplus spilled thoughtfully into my ears.

By then my belly had forgotten its lunch, my eyes smarted and streamed. Out again, to sluice my head under the White Hart's yard-pump. A cup of real chocolate and a muffin at the teashop: and Boa and I took the Newark road for the last hour of daylight. He ambles at forty-five and when roaring his utmost, surpasses the hundred. A skittish motor-bike with a touch of blood in it is better than all the riding animals on earth, because of its logical extension of our faculties, and the hint, the provocation, to excess conferred by its honeyed untiring smoothness. Because Boa loves me, he gives me five more miles of speed than a stranger would get from him. 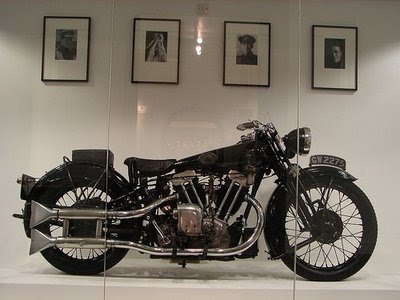 At Nottingham I added sausages from my wholesaler to the bacon which I'd bought at Lincoln: bacon so nicely sliced that each rasher meant a penny. The solid pannier-bags behind the saddle took all this and at my next stop a (farm) took also a felt-hammocked box of fifteen eggs. Home by Sleaford, our squalid, purse-proud, local village. Its butcher had six penn'orth of dripping ready for me. For months have I been making my evening round a marketing, twice a week, riding a hundred miles for the joy of it and picking up the best food cheapest, over half the country side.
====================================================================
T.E Lawrence numbered the seven Brough Superiors he owned George I, II, III etc...after George Brough the founder of the company that was considered at the time (and to this day in many cases) to be the manufacturers of the finest motorcycles. "Boanerges" in the text is apparently a reference to the nickname given by Jesus to James and John, referring to the God of Thunder.
Posted by Conchscooter at 12:01 AM No comments: Links to this post

"Given previous influenza pandemics, and this not an influenza virus so we don't know for certain it will act like that, but if it did, by far the second wave was the worst one of each of the pandemics....A second wave (of COVID-19) in late summer or early fall that lasts three or four months could make everything we've experienced so far seem mild."
CIDRAP, Center for Infectious Disease Research & Policy
University of Minnesota