Real estate in the Keys is supposedly getting more expensive again. One can only wonder about such "news" considering how well packaged information is all around us. I saw this façade held in place to create an illusion of restoration for a house which will be, to all intents and purposes new. 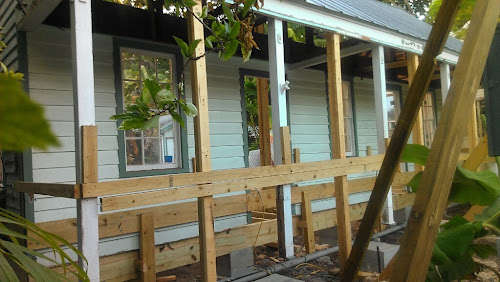 Key West has lived through uncountable cycles of boom and bust since it was formally founded in 1828 and the story is told of how in the Great Depression a plan was mooted to give up and evacuate the islands where eighty percent of the population was "on relief." Since the 1960s when the Navy cut back and the city plunged into another depression, real estate has fueled a rise in the city's fortunes, and tourism has created a web of connected jobs and business and attractiveness. 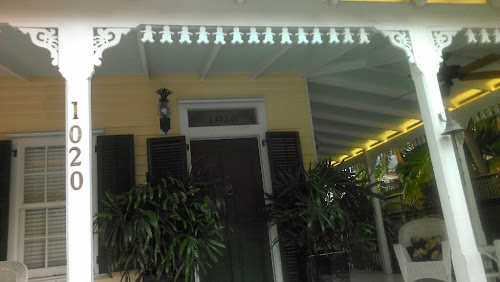 A small sub tropical island filled with exotic vegetation, a large collection of preserved wooden homes and a near perfect winter climate has to attract people with money. I believe modern communications have enabled the continuous interest in this little town in the Gulf Stream. If you read the hundred year old newspapers when the railroad came to town you will read comments opposing the railroad connection as it would change the fundamental isolation of the island, for the worse they feared. 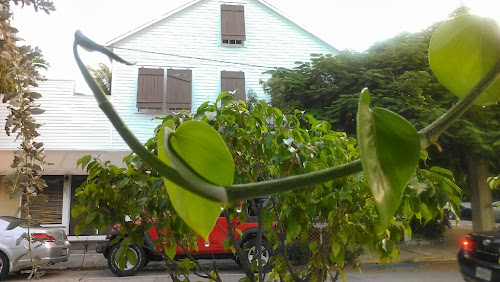 Prior to Flagler's railroad arriving in January 1912 you could take a boat out of Key West or drive a winding dirt road and a collection of wooden bridges and take two long ferry rides, a very long all day affair to get to Homestead if you even had such an exotic thing as an automobile. The train took seven easy hours to get to Miami in comfort for anyone with the modest price of a ticket. I'd say things changed a bit in sleepy Key West! 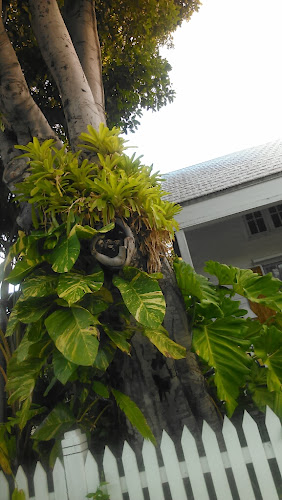 When I first came here it took five hours on my Vespa to ride the old two lane highway built in 1938 on the old railroad bed and bridges. In 1981 Key West was the back of beyond. The internet brings the world to one's door for business and pleasure. Satellites brought TV for those that watch the infernal box, and a new modern highway built in 1982 puts Key West within three hours of Miami for a determined attentive driver who knows the road. Modern planes fly in and out despite the short runway and mail and package services offer overnight delivery even from here, on the fringes of reality. To live in the Lower Keys today is to be integrated into the electronic world of North America. You can run your business from a winter porch here as well as you can from Up North. Most of the time anyway; sometimes lack of reality intrudes long enough to make type A people a little frustrated! 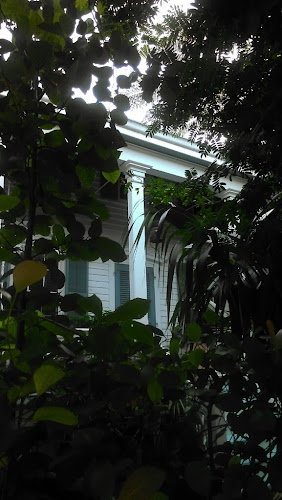 Gay men were attracted to a navy town in the fifties when the love that dare not speak its name needed outlets out of the mainstream of public consciousness. That period led to an appreciation of the physical beauty of the crumbling Old Town. Conchs were delighted to sell up and buy modern comfort in ranchers in New Town. The era of openly gay Key West was born, but the beautification of Key West pulled in straight money too. Nowadays Key West is pricing itself out of the Youth market, gay or straight. Old white people with money can still afford million dollar part time cottages and they come in droves now, making winter time Key West resemble Boca Raton and Royal Palm Beach more than one might like. 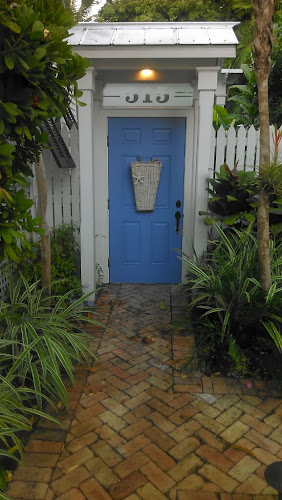 Soon the empty palace shown below will reopen for a few blessedly short weeks, the car will be uncovered and part two of the well heeled life will resume for the coldest months. This is not the Bohemian craziness of literature that intrigues the modern day visitor, the seekers of an alternative life style fueled by Art and alcohol and student digs and altered consciousness seeking a new and better way to reinvent the wheel. Key West today demands a well regulated life for long term working class residence. 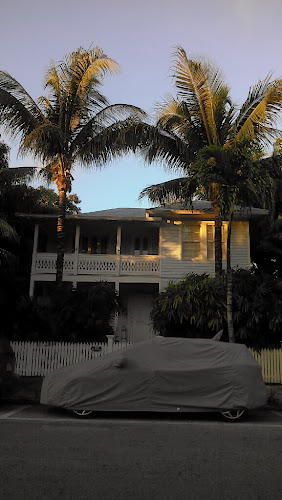 If I were young I'd still choose California as I did 30 years ago, the Golden State still leads the world in innovation and youthful energy. Perhaps I might prefer a center of exuberant study, Austin with its amazing music scene and oil endowed university, or New Orleans and it's truly particular culture, or Boulder and it's Great Outdoors, or New York for true lack of affordability combined with excitement and opportunity. Key West simply costs too much and offers too little to the young and ambitious. 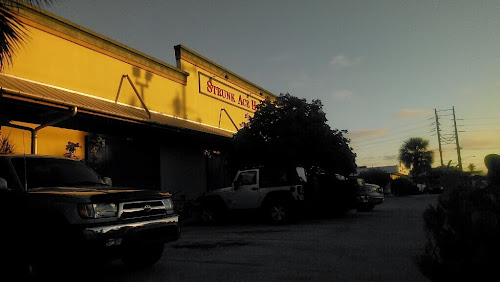 Key West still attracts young people of course, but the restless kind seeking a break from reality, sailors and bar staff, a nice break year, safe in the US making a small living instead of hiking the Andes or taking trains round Europe. 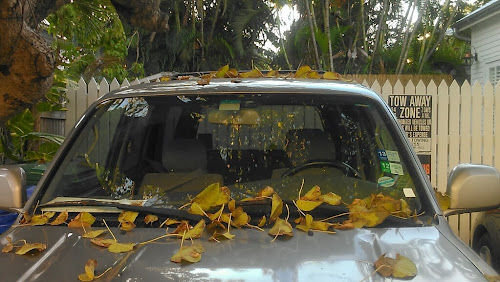 I think I have one of the best jobs going in Key West and clearly I am not alone. Our turn over rate has pretty much stopped as no other work offers the combination of pay and benefits of police dispatch a high stress job in a town determined to be laid back. Of course not many people can work in a 911 center it turns out, it takes peculiar talent apparently, but I am the oldest dispatcher at 56, the other dozen employees range from 45 to 25 roughly, and our latest trainee is in her 30s married no children and shocked by the high cost of living compared to life in Chicago. The youngsters mostly have family support in town but overtime is highly sought out to support life in Key West. 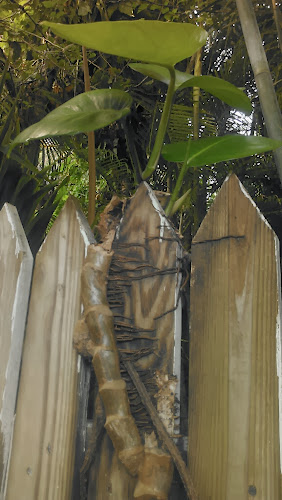 My own love affair with Key West has been been one of those slow fuse entanglements that has grown on me. For a lot of people one visit ignites a desire to live here that will not be denied whether or not it is ever fulfilled. For my wife and I settling in Key West was a long drawn out decision, as my wife had deep roots in California and I too had found a decent life in Santa Cruz, a town that in those distant days was more weird and more stimulating than most, so a move to Key West was not made in an effort to escape boredom. We sailed into town tired after two years traveling with a need to make money and a desire to return overland to the Golden State whence we had set out on our catamaran. 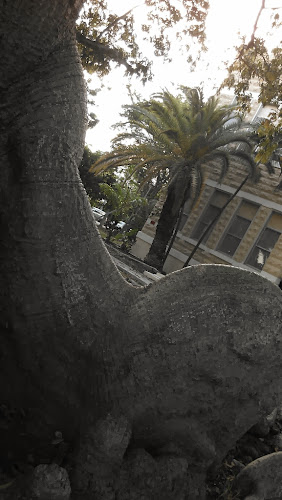 But we landed here in the boom years and jobs were abundant, optimism was burning up the city and yes, the weather was delightful! My wife the attorney had always wanted to try teaching and so desperate were they in Key West for a professional willing to trade affordable living for good weather she grabbed a job, her arthritis hurt less and we sold our California home. Now we live in a millionaire's playground and gentrification has left us working people far behind. Wealth inequality in the US is real and growing and affecting all of us, though we pretend to ignore it. 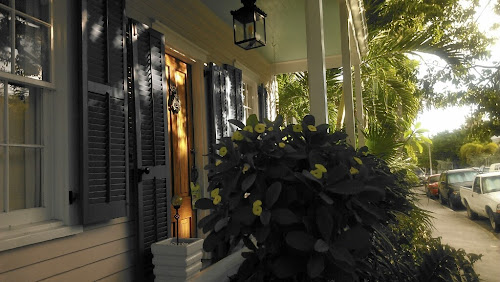 You know Key West is special because the more you try to define its charms the further they skip away. Climate change is finally being taken seriously by some radical types like scientists who suggest most of the Keys could be drowned in fifty years. Not surprisingly in our short term culture the idea that sea levels may rise mightily in a few decades is pretty much ignored in daily life here. Sure, we make uncomfortable jokes about rising seas but real life goes on. And helicopters will lift the part timers out of here at the last minute and take them to their compounds on higher ground. Gentrification continues of course along with the graying of a funky little seaside town with perfect winter weather, lovely architecture and astronomical prices.