I was not quite so demonstrative but I enjoyed going deep into the back country at Boca Chica Beach. I haven't been all the way back for years. Cheyenne came back a time or two soon after I got her from the pound. This picture from 2009: 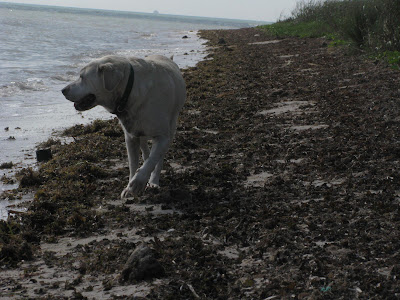 Rusty had great fun running down the beach and working his way through the bushes. The shoe fence is still there: 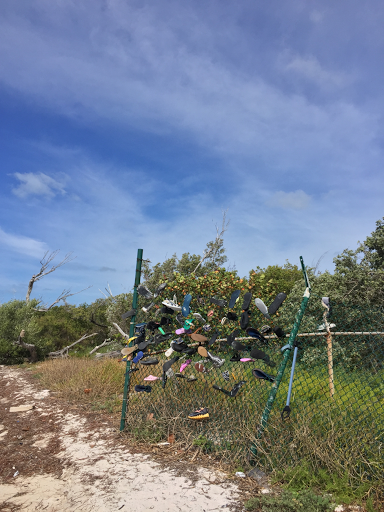 Some people like to leave their mark as they go. I take pictures and leave footprints where there is sand or mud. Some build cairns for whatever obscure purpose: 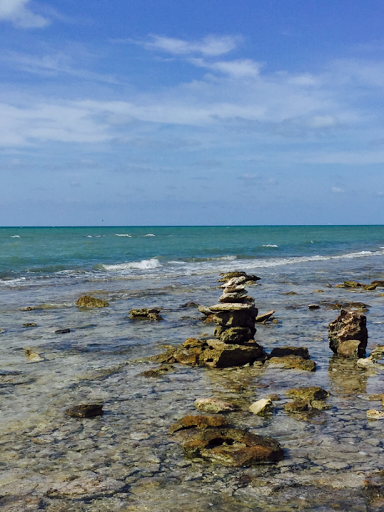 There is also an elaborate stick structure that Cheyenne found fascinating in 2010: 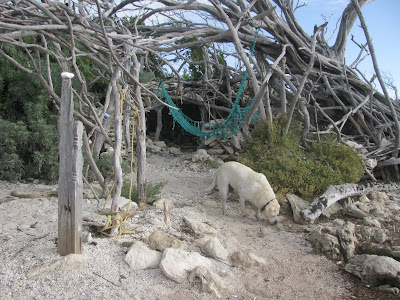 And which Rusty circle in delight in 2016. They have done their best to give it a suburban sort of look with decorations and even a disabled Yamaha Zuma scooter parked along the far side. Ready for the commute as it were: 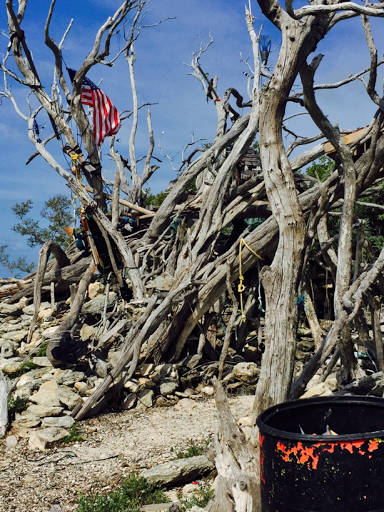 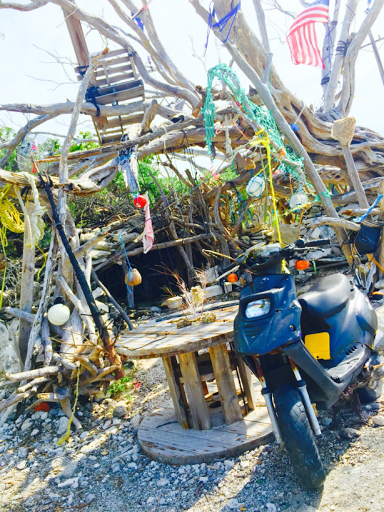 It is a desolate and lovely coastline with a sandy trail barely discernible among the rocks and mangrove roots: 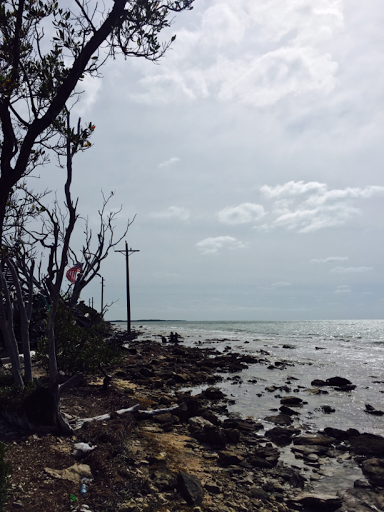 The first obstacle is this water crossing. It's enough of a river to have encouraged one man to set up his nude sun worshiping location just before the gap in the beach. This area is noted for its nude sunbathing, and more. 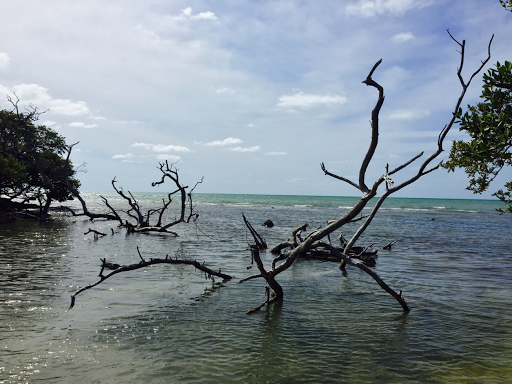 Rusty's confidence in me has gone up enormously in the two months we have been together and he took the plunge fearlessly when I indicated we had to cross. 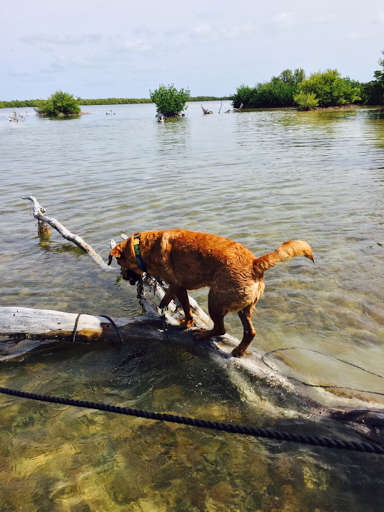 The little Carolina Dog is quite the acrobat: 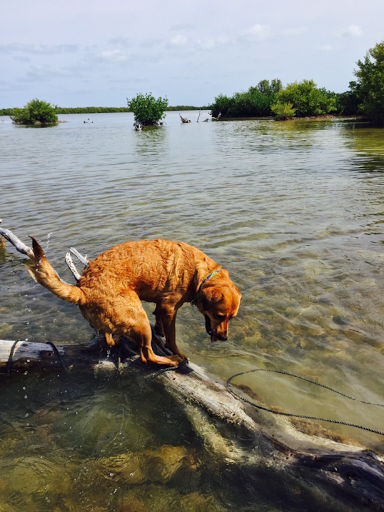 I was wading thigh deep in the water which happily was quite warm but fast flowing like a river on a rising tide. 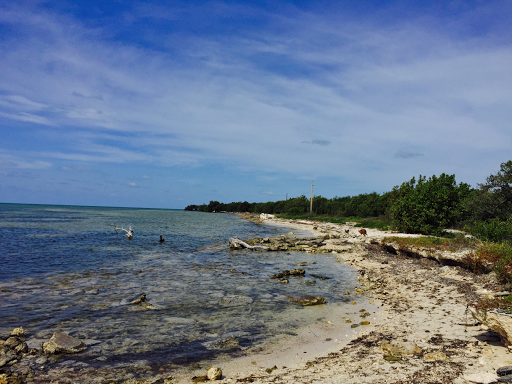 This beach also has it's share of Cuban Chugs, the name given to the craft they build out of found materials to cross the Straits of Florida, 90 miles of potentially extremely rough waters. I admire their guts, building these things in a country where it's forbidden and then taking off on such a journey seeking a chance to land avoiding the coastguard who would take them back to Cuba. Once they get ashore they are safe and can stay. 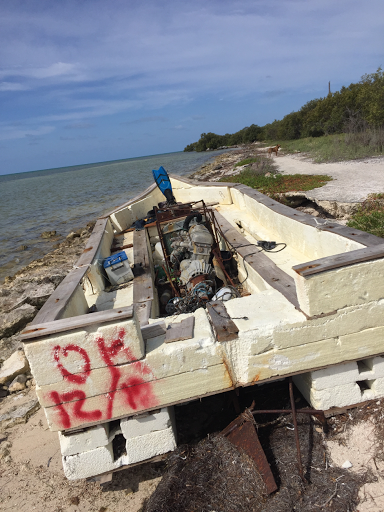 The Cubans also put engines in their Chugs. Some are gas powered and some diesel adapted for marine use. It is remarkable ingenuity and bravery, so I hate seeing posts on Facebook each time there is a landing where people spit on these Cubans for wanting to come here for "the benefits." Only someone who has never emigrated, or left their home town can imagine that these journeys are undertaken lightly for a chance to not work and help their families. I emigrated in a commercial jet airliner and that was tough enough. 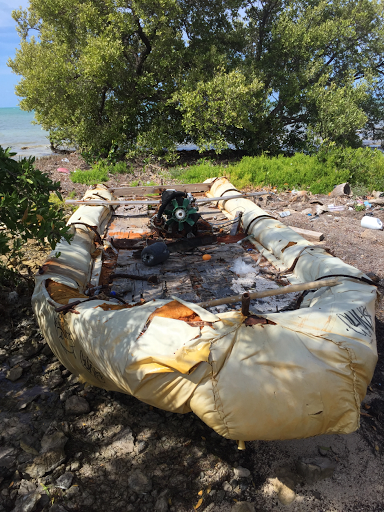 Sometimes the stray dog comes out in Rusty. His frolicking was interrupted by the sight of something mysterious and weird and of deep concern. When he gets worried he sits and stares just like this in the picture below. He had spotted the pelican bobbing on the water, a dark dot in the top right of the picture. 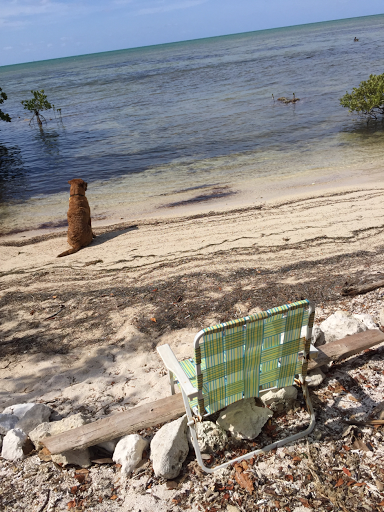 He explored every inch of the woods: 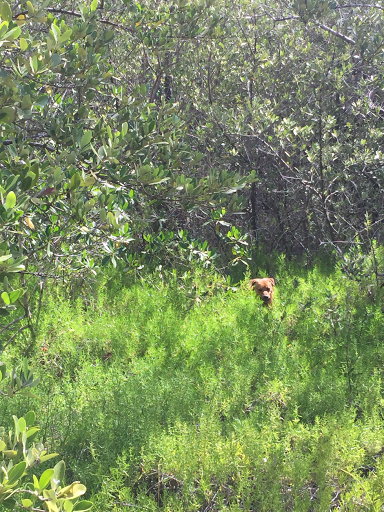 In 2010 this sturdily built canal to allow the flow of water in and out of the bay was only half built: 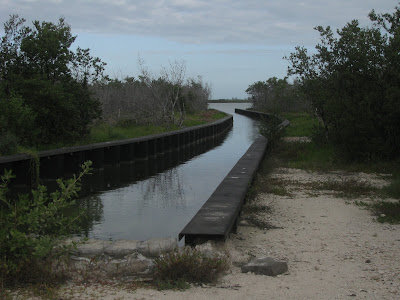 Now it's finished and you can't cross to the last piece of open road, Old State Road 4A that used to go all the way to Stock Island. 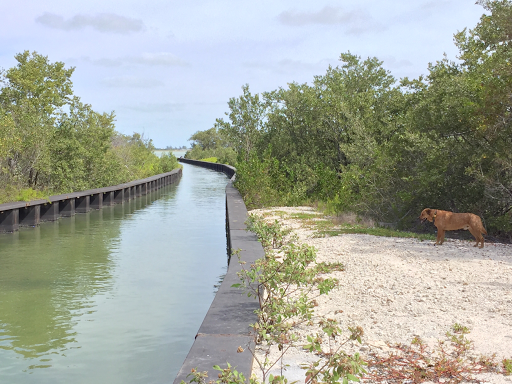 We turned back and walked the much shorter faster direct route on the old asphalt back to the beach: 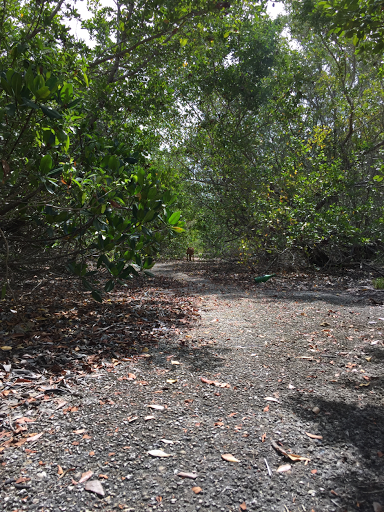 Rusty was not tired by the heat and was always alert, looking around: 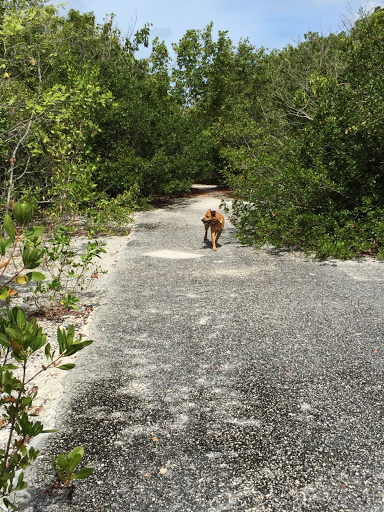 Back at the beach a cool breeze was blowing and Rusty set off to explore the woods behind the trail. He didn't want to miss a thing. I played with my iPhone camera: 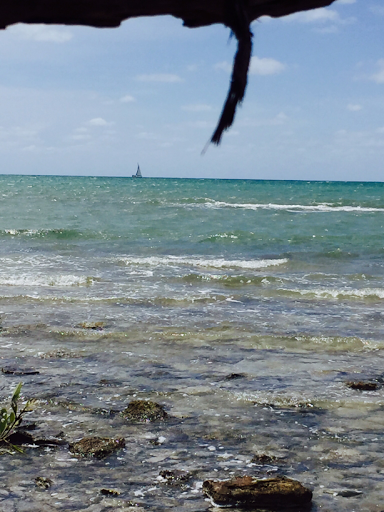 On the last stretch there was one final terror that forced me to put Rusty on a leash for the last half mile. This red thing was bobbing and weaving looking to kill my little brown dog: 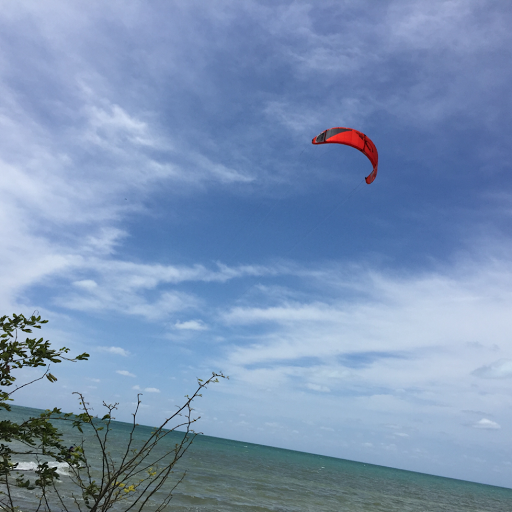 We made it safely out of there. Rusty has even got used to me rinsing him off after a wet walk and he took his bath in stride. Then it was time for a very long deep nap. 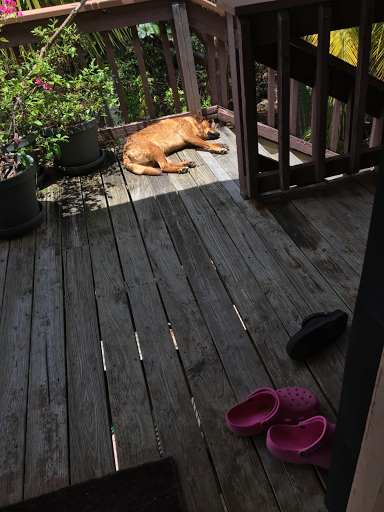 When I made too much noise in the living room he went to his bed in the bedroom. When I retired to the bedroom for a nap after my chores and before I went to work, he got up wearily and went to find some peace and quiet on the couch in the living room. He really needed his sleep poor boy.