I mentioned last week I was in Marathon for three days of classes. One day we took lunch at what is frequently described as the best place to get seafood in the city. 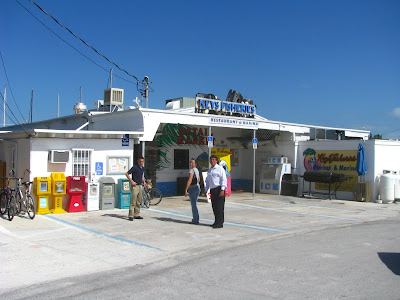 The restaurant and marina is located on the Gulf side (the north side) of Highway One at the end of 35th Street which is behind the Switlik School and the Florida Highway Patrol Offices. It's a busy place. 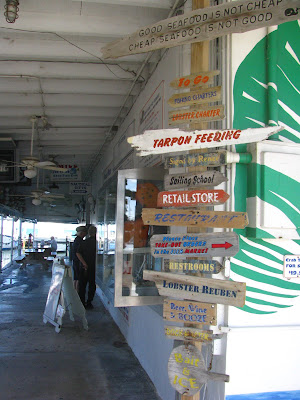 Karl and Kristi were looking for one of the attractions here, the tarpon looking for tid bits. None were available when we were there. The restaurant exudes the sort of Florida Keys picturesqueness people queue up to enjoy. 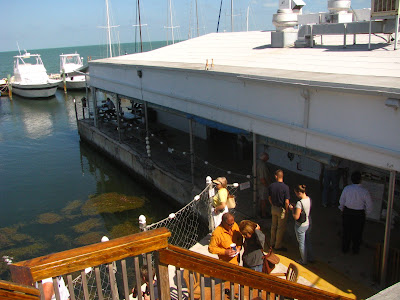 I was sorely tempted by the lobster mac and cheese, a very popular fad currently sweeping the islands but I thought it would be too heavy for an afternoon's class work yet to come. The "Name a TV Show" suggestion is part of the shtick here. 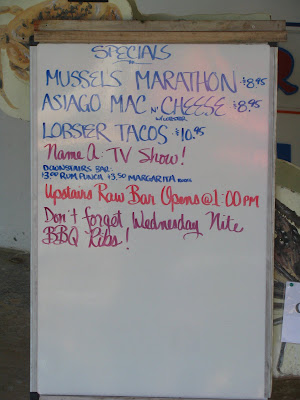 To place an order the staff require each customer to name something, in this case a program on television. I've been there when they wanted the name of a tune or an actor or some other thing. 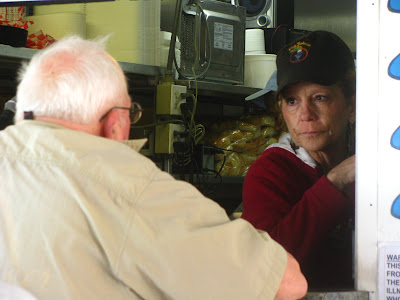 It's a gimmick that really gets people going. Karl opted for "South Park" and Keith took "fantasy Island." That got the lady to giggle at the window. I chose "Northern Exposure" the only TV show that left me bereft when it ended. I still watch the collection of discs my wife bought me years ago. This category could have been a problem for me as I have no TV connections outside my Netflix subscription. 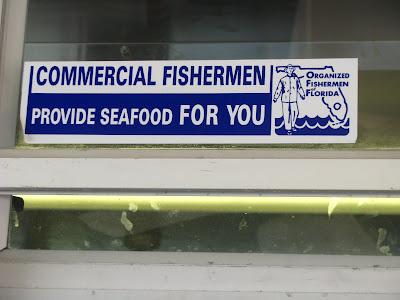 Keith started to give me a hard time when I took his picture but I wanted to illustrate the place with something a bit more lively than static photos. 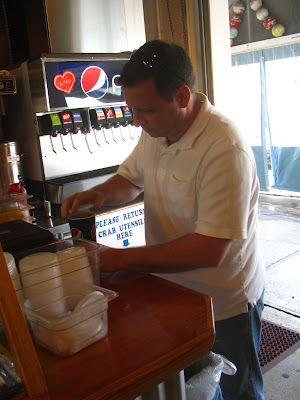 Outdoor seating was the thing in this weather- sunshine and a light cool breeze and no humidity. From the left, Karl, Kristi ("Jersey Shore") and Lisa ("The Flintstones"). 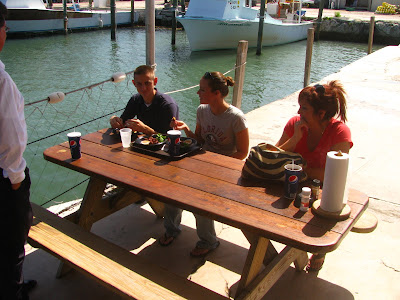 I expect this sign gets as ignored as any other. 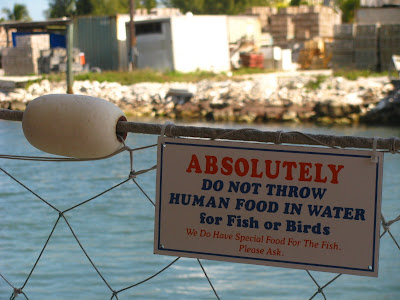 Bird feeding isn't allowed either though judging by the pelicans attitude they have expectations... 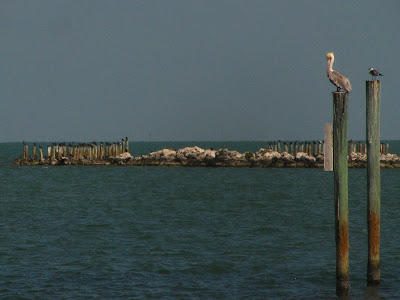 ...as did this bird, imitating the posture of the tourist in the distance. 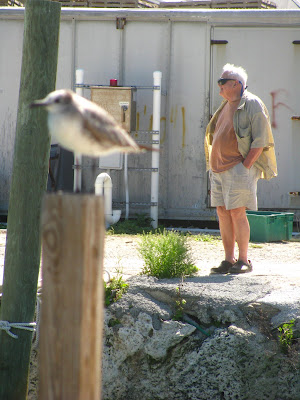 Keys Fisheries is a big place, causing Fred to pause and ponder as he waited for his order. I forget which show he picked though there was some discussion about the choices. 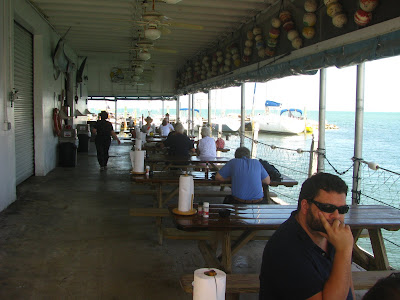 They sell knick knacks in the store and I quite liked these t-shirts. 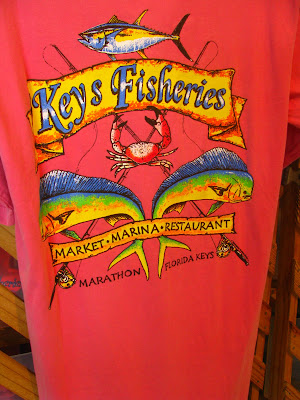 My grilled mahi mahi (dolphin) over Caesar salad was ready before I knew it. My colleagues were shouting "Northern Exposure " at me several times before I twigged that my food was ready. 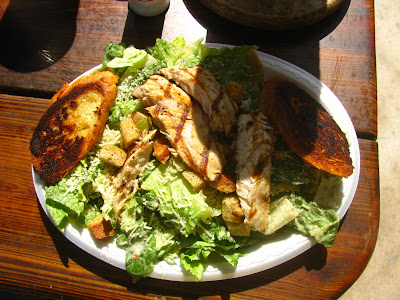 Karl got shrimp and they looked excellent. 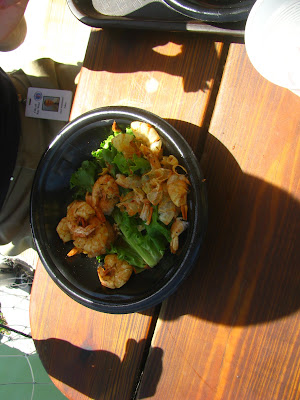 Lisa got the Lobster Reuben which came with sauerkraut and it was enough to feed two. I will have to come back with my wife and soon, as she loves lobster. The stuff really is fresh too, as you might imagine. 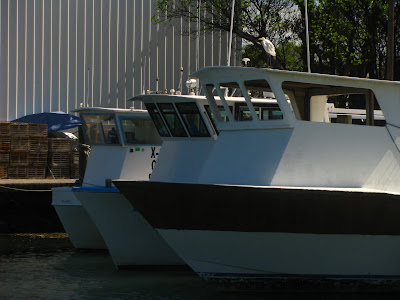 Ray had a fish sandwich and he was happy as a clam enjoying the Keys experience. He'd lost the formal looking tie by this stage in the class. he never did show up in a Hawaiian shirt as promised. 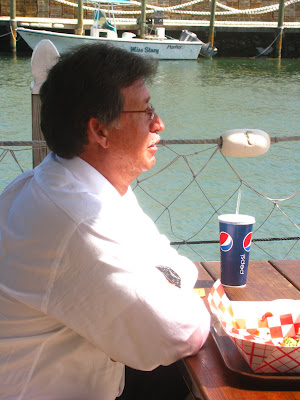 The last day of class the Monroe County Sheriff's Office put on lunch and they did us proud. But for a visit to Marathon and when out hunting for fish I would come here: 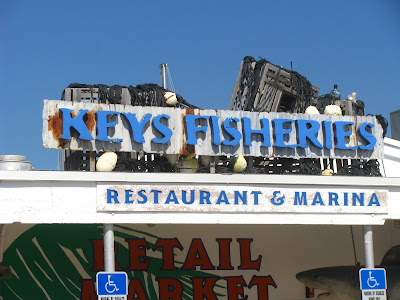 It's a full service kind of place. 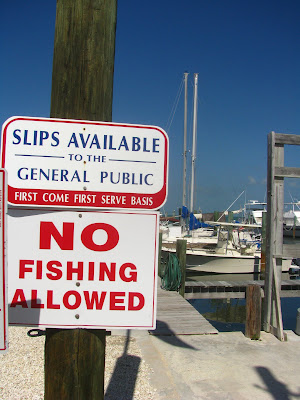 The colors of winter are outstanding. 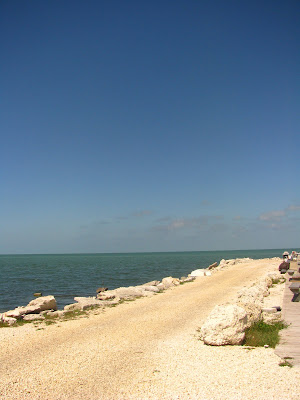 And then back to reality along Highway One, here looking south towards the traffic light at 33rd Street. 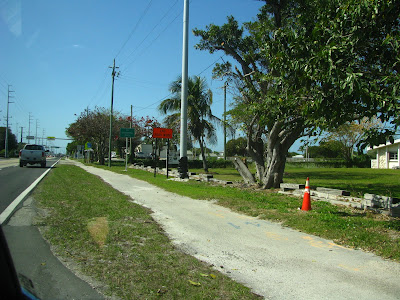 Considering we had excellent hamburgers at Burdine's on 15th Street the day before we ate pretty well during our stay in the Middle Keys.
Posted by Conchscooter at 12:01 AM 10 comments: Links to this post