I had noticed a certain excitement in my dog the day before when we drove downtown and he had his head out the window so next morning early I brought him down, actually New Year's Day and let him loose. The courthouse in the dark at 6:15 am: 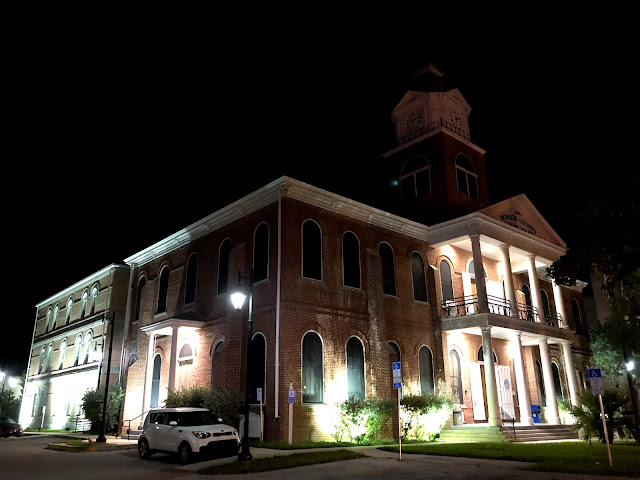 Burning the midnight oil, as it were: 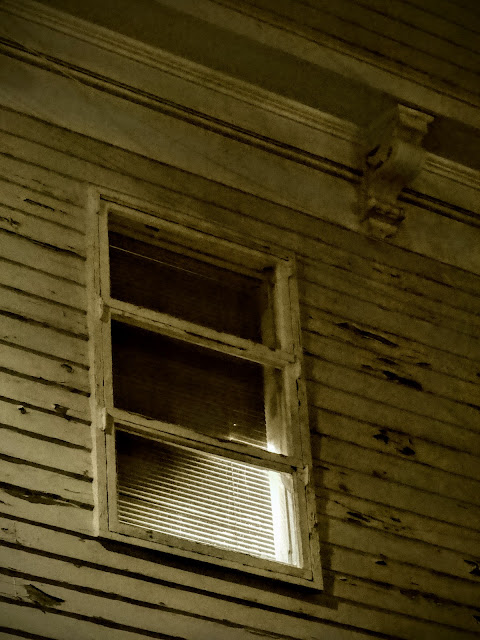 I wish they would fix the sign, it looks so much better when it reads "Strand." 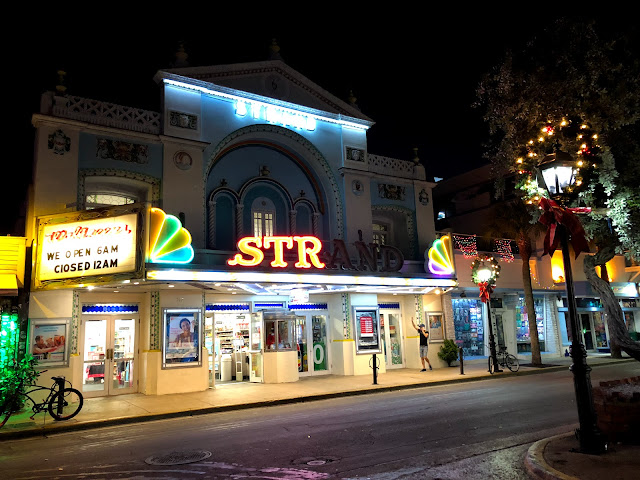 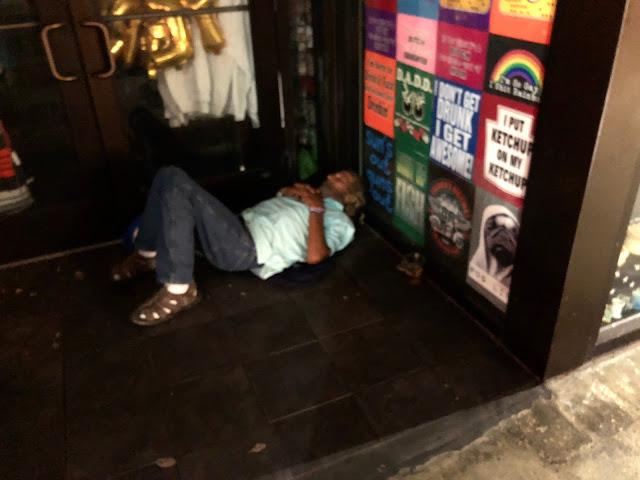 Look at that dog keeping an eye on things. Rusty and he exchanged not one bark oddly enough. I guess we passed the sniff test. 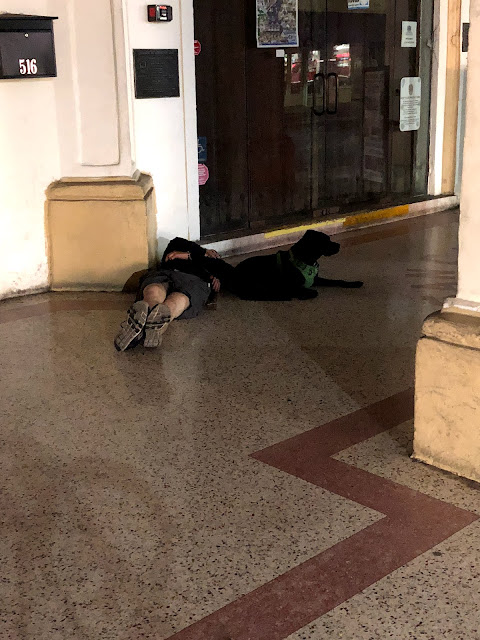 These residentially challenged half wits were talking loudly and what they said was pretty funny as I stumped by pushing my rolling walker. One guy announced he had lost his sunglasses on the steps "back there." He needed a new pair obviously. Another guy said he needed a pair too. He was planning on stealing a pair later when the stores opened. And n he wasn't going to steal two pairs to help the other guy out. That would be too obvious. Yes I think it must be a real pain to operate a store downtown with these bozos planning their lives around your opening hours. Clumsy isn't in it. 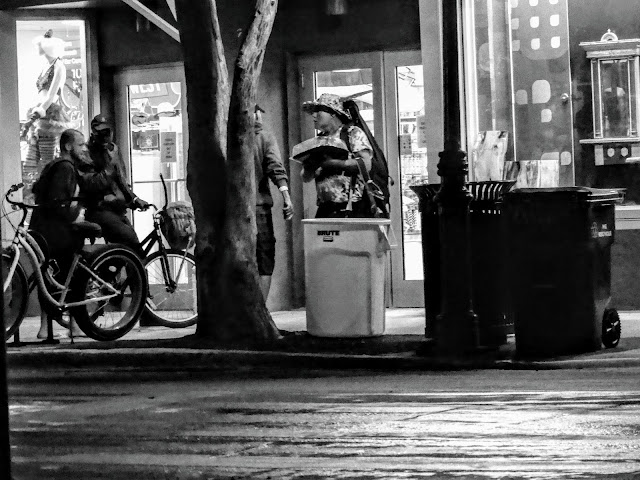 CVS which replaced the lamented Fast Buck Freddie's is still showing off the work of artists in it's window . in this case the dioramas of one Devries Wray. Very nice too. 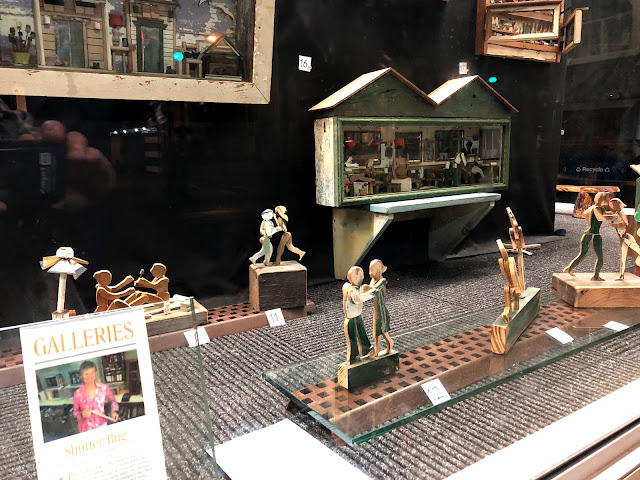 New Year's Eve is over but the crowds as seen on Instagram were enormous. 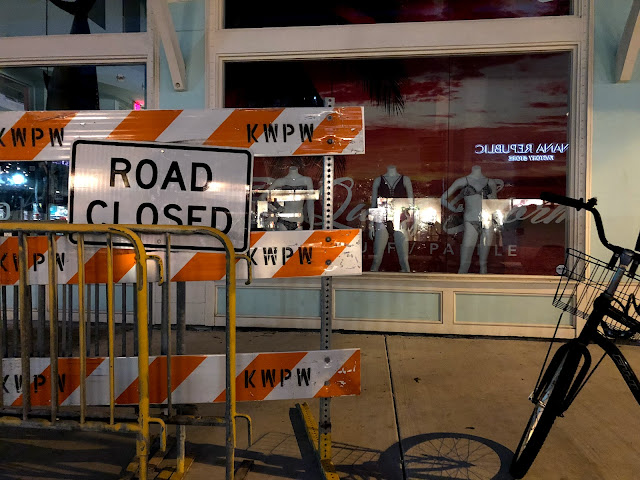 Part of me was quite relieved Rusty needed us at home. He has a bad history with being shot at while a stray in Homestead and fireworks, not thunder, freak him out. So we felt obliged to abandon plans to see Sushi drop in her shoe at midnight. Mind you I feel claustrophobic just looking at the crowd: 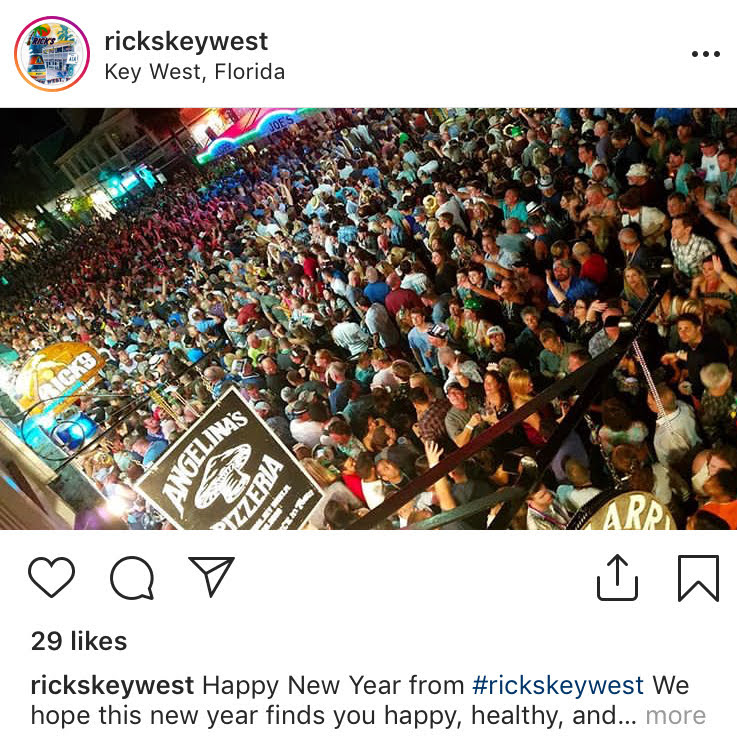 By the time we got downtown things were back to normal for the hour of day, quiet empty streets. 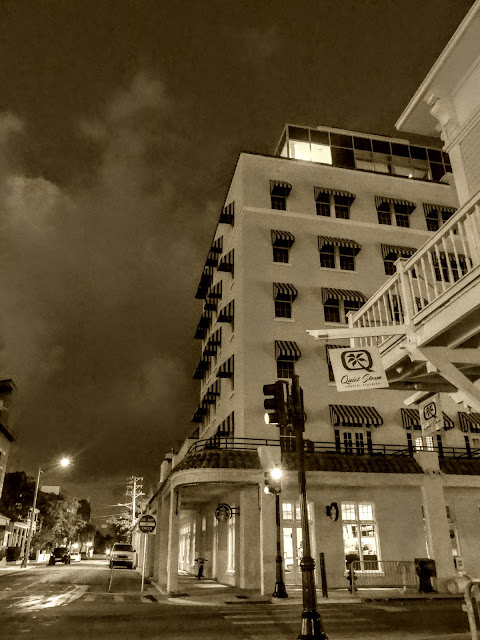 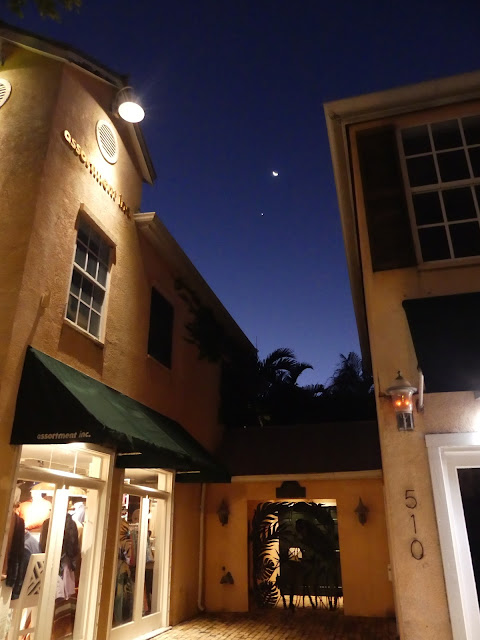 I have started a gym program three days a week to build up my strength which I am combining with my physical therapy and also a chiropractic massage therapist so I am hoping to be completely back to normal before too long. I am tired of not feeling whole. 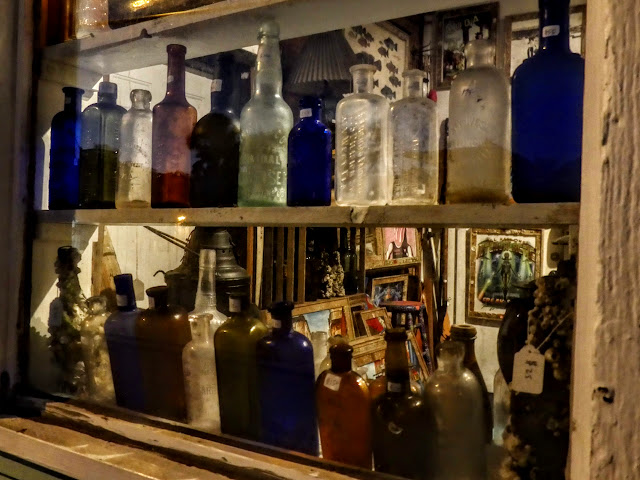 We walked for just over an hour and I confess I was tired at the end of it and glad to sink into the air conditioned comfort of the car back at the courthouse. 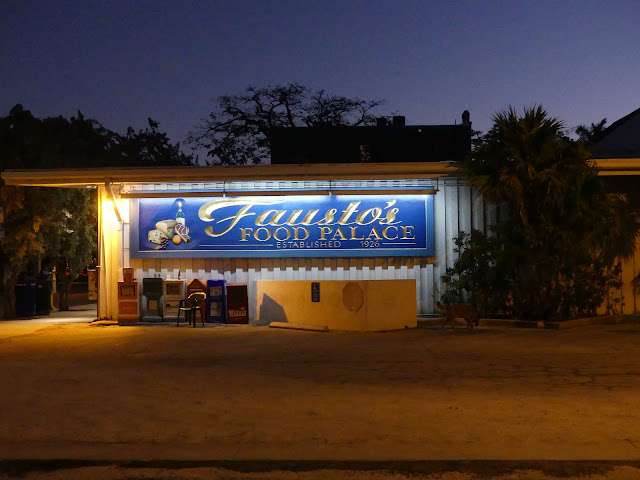 But Rusty too was pretty tired by the end of it. We walked pretty constantly and he was showing signs of being ready to go home after I gave him some water and he sank onto the back seat of the car. 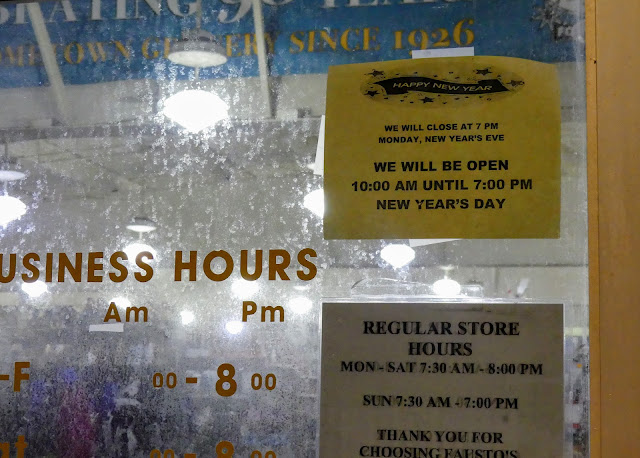 Signs of the night before were visible on the streets: 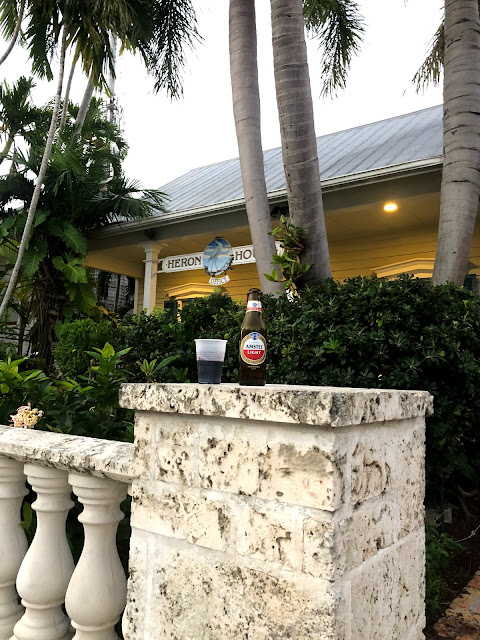 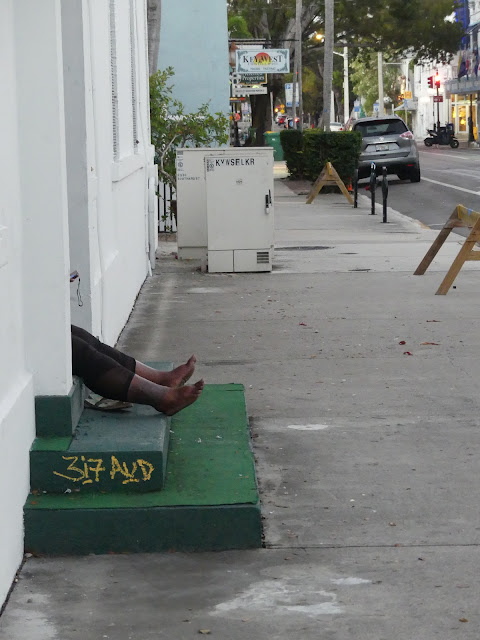 Hot sticky dog, perfectly behaved. He only crosses the street after he checks for traffic. He amazes me. 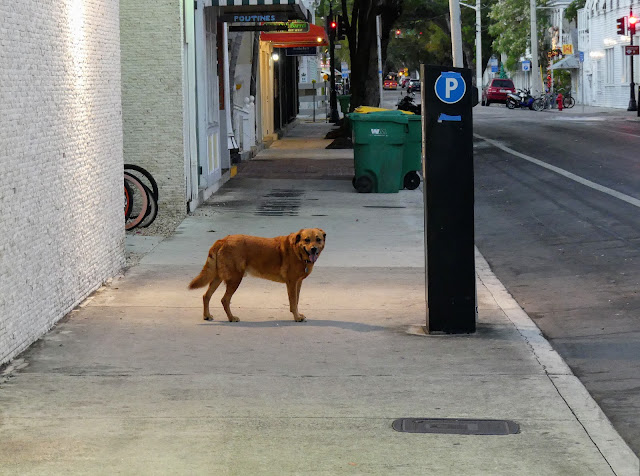 Today is the 6th of January, the holiday of 12th night in the Christian calendar where traditionally it marks the end of the Christmas season with the arrival of the three wise men. In Italy when I was a child the Nordic version of Christmas which has taken over the planet Christian or not was not properly celebrated and we got gifts (when I was in Italy) on this night. They were delivered by the Christmas Witch known as La Befana. Read the links for details if you are curious but what is more relevant is that by twelfth night you'd better have your Christmas decorations put away or face massive quantities of bad luck. Like maybe breaking your pelvis? Which wasn't what happened to me as I'm married to a Jew and we don't decorate, thanks to Hanukkah which holiday we do mark. 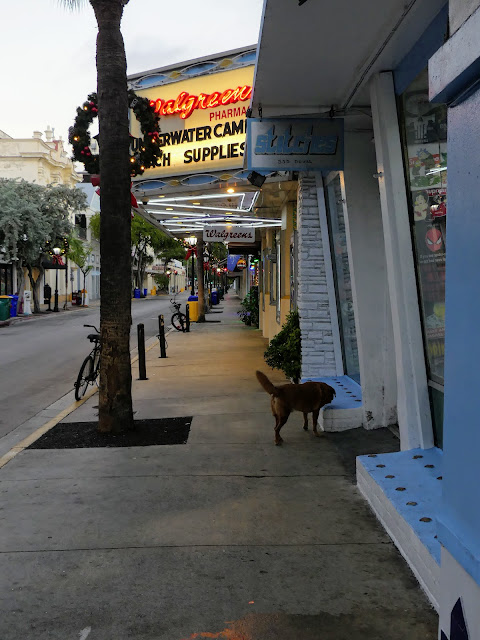 Appelrouth Lane connecting Duval to Whitehead Streets looks very 19th century in sepia coloring. This was where Rusty first got chased by a broody hen when I first walked him downtown three years ago. That was an experience he never forgot apparently and he still steers clear of chickens where he meets them. I do nothing to discourage him as I find it handy to know he won't chase and kill chickens at random. If one day we go to Mexico that sort of behavior would end up being expensive for a couple of gringos with a livestock killing dog. 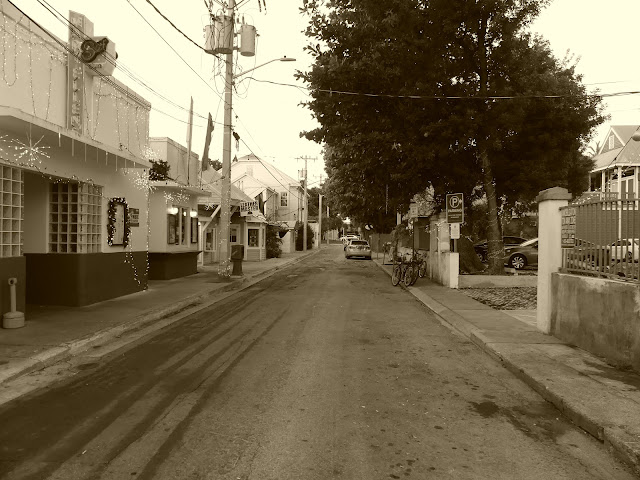 Man and chicken. A study: 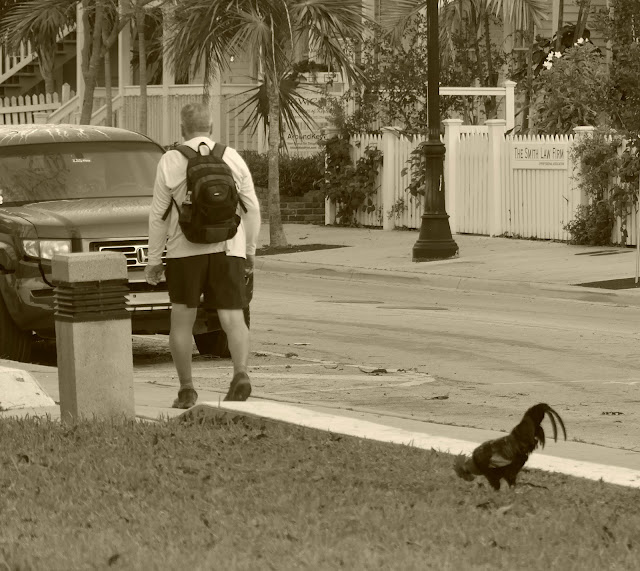 Our first walk together downtown in a long time. We must do this again soon.
Posted by Conchscooter at 12:00 AM 3 comments: