We read recently that Fat Albert will be taken down in March and the blimp will never fly again over Cudjoe Key, its surveillance duties no doubt superseded by aerial surveillance of a more modern kind, drones known and hated around the world and now it seems they are to fly over the Homeland in their thousands to keep us safe. That sort of Federal supervision I could do without but my hat's off to the Navy announcement made public in the newspaper yesterday. It seems that a few days before Pope Benedict steps down as head of the scandal wracked Universal Roman Church the waters you see in the picture below will be restricted to Navy boats only. Bummer, especially if you use the Navy Basin Launch Ramp to conduct amphibious tours of Key West Harbor. 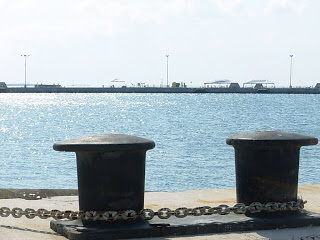 The Navy has been intertwined in Key West right from the start, sometimes to the benefit of the military and sometimes to the benefit of the city and over the centuries it's been a back and forth of benefits. The Navy has always needed a secure base here, in the early days to run pirates out of the Bahamas and make the Straits of Florida safe for merchant shipping. And then when the US wrested control of the Colombian province of Panama away from Bogotà and created the Canal Zone the priority has been to secure the sea lanes across the Caribbean Sea. In the 70s reductions in force caused horrid poverty in Key West as downtown slumped and empty waterfronts faced Dival Street. Some few people took a chance, like the head of HTA ironically, and bought up the properties in an effort to keep Duval alive and eventually that chance paid handsome dividends. After the Navy got run out of Vieques in the so-called Spanish Virgin Islands off Puerto Rico, Key West's strategic importance grew exponentially as the country's best training base. If you think Key West is an open air bar and gay resort you are partly correct but Key West always has been and is still a major military installation. And every now and again the Navy speaks up and reminds civilians who forget that fact. The launch ramp in the picture below is not a civilian facility it turns out. 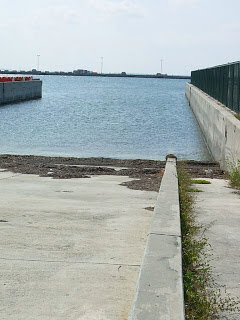 The thing is the amphibian tour vehicles operated by Historic Tours of America use the ramp and tour the basin for three quarters of an hour four times a day and they had an agreement, according to the newspaper that the Navy would give them a week's notice of any military required closures. Six months later the Navy has announced the deal is off, it's not working for them, how sad too bad. Now you might think all these Second Amendment freaks would whip out their armories and march down to the military base and tell these autocratic Federal goons to stuff it but in point of fact that's not how it works despite the implications to the contrary put about by the National Rifle Association. HTA told the newspaper it's throwing in the towel and Duck Amphibian Tours will cease by February 25th, the Navy deadline. It turns out the massive brutes operated by eleven employees (unemployment? Blame the Navy was the not so subtle implication suggested in the newspaper by the well padded corporate CEO who is no danger of the breadlines) will be sidelined. They are too massive to launch from Simonton Beach and plans call for a base to be built off Trumbo Road at some undetermined point in the future. Anyone who imagines residents of Old Town will miss these monstrosities has to be dreaming. Frankly I hope they vanish and never reappear, and I don't live in the city, as it's bad enough civilians think Yukons and Escalades make sense on Old Town streets. 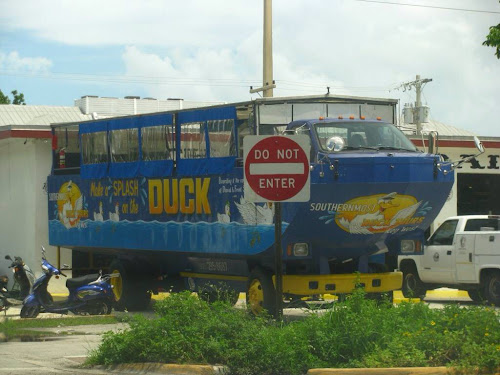 The Navy's assertion of its rights over the Basin has other implications for the city, pointed out in the newspaper article. There are 34 acres of open space deeded to the city by the reduction of the Truman Annex Navy Base and all this unused land is now ready for redevelopment. In a town where assholes have at least two opinions each, what to do with the waterfront land has been the subject of some...debate. Plans were announced for a not so Key West development of landscaped facilities in the style of mainland Florida while a proposed upscale marina was put on the back burner to try to keep the debate below incendiary levels. Indeed the marina was nowhere to be seen on the latest plans published for public consumption but in the story about the Navy decision the fictitious marina was again mentioned as being at risk thanks to the Navy's closure of the basin. It seems as though we owe the Navy a second round of thanks for the closure.

The marina plan was pretty odd actually as the developers suggested they build it at city expense using bed tax dollars, an idea that was deemed illegal. Nothing deterred the idea was that some other public funding build the marina, the developers manage it and pay a modest rent to the city for its own facility. It's the sort of public private partnership that brings government into disrepute for being taken to the cleaners by the private side of the partnership. However all that is now off the cards, thank God. This waterfront all the way to the Westin Marina in the distance will be closed to even millionaires' gin palaces. Money does not talk in this case. Thank you Navy. 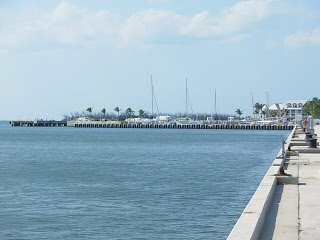 Not surprisingly the military is pretty cagey about why in the world why they need the basin nor what they do with it but apparently their Mission is best served in private. They did tell the paper they use the forty foot deep waters to train in underwater activities and for that they even employ the venerable floating Museum called Ingham, a retired Coast Guard Cutter that survived the development plans for the waterfront. Its former colleague, the last survivor of World War Two North Atlantic Convoys called Mohawk has been sunk off Sanibel Island as a diving attraction. Which I still believe is a terrible shame, the more so now the marina's future is clearly in question. 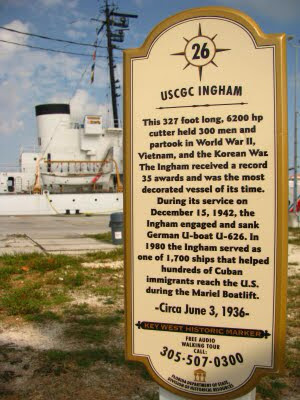 The Navy also uses the Outer Mole to tie up visiting ships when they take breaks from patrolling the Caribbean Sea in an endless drive to stop the drug flow to the land of high chemical demand. The city benefits enormously from the Navy presence, not just because sailors spend money in town but because reliable Navy spouses work in local businesses and also because the Navy also allows cruise ships to tie up on the Outer Mole and so far there is no word that agreement is In jeopardy. 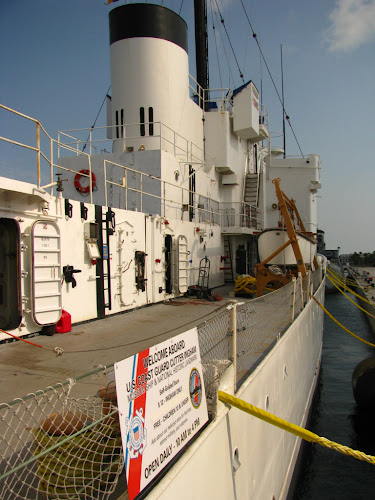 If that agreement were ever to go up the spout the city would have some fiscal issues to deal with and opponents of cruise ship expansion might cheer but city budget cuts might cause some second thoughts. Maybe not. There's no word on the future of the National Marine Sanctuary patrol boats tied up at the Eco Discovery Center. My guess is they are Federal Park law enforcement and thus exempt from the prohibition. 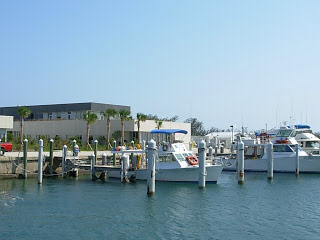 The last time the Navy spoke up on Truman Waterfront to devastating effect was when the Truman Annex honchos got it into their heads they wanted to put a gate across the Southard Street entrance to the gated community. The city commission curled up in the fetal position and told the property owners association it was fine to shut a city street with a gate when the Navy spoke up and said so sad too bad, do that and we will set your backsides on fire ( they used diplomatic language ) and you never saw a bunch of bullies step down so fast. Plans for the gate, like plans for duck tours, are on hold. The side benefit to that little fiasco was an alternative route onto Truman Waterfront that the city built off Petronia Street, which is quite useful, as it's not at all publicized. 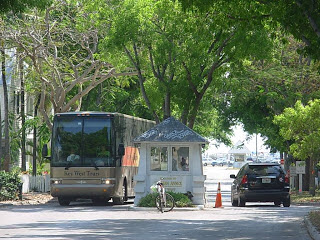 President Obama's plans to launch 30,000 drones over the US seems oddly unconstitutional to an old fart like me, still struggling to come to terms with the presence of a tracking GPS in my smart phone. On the other hand his plan to offer a bastardized incomplete and inefficient form of national health care coverage seems like a step in the right direction and I keep hoping Republican obstructionism at the state level will produce a Medicare for All plan that much faster as the Feds are forced to take over state health care exchanges. When I see how the military leads in Key West and dithering civilians dither, I feel oddly comforted.

Think about this: Gay marriage is a tough toad for civilian leaders to swallow as they study popularity polls, as usual, Thus civil rights changes come from the military first and we ditherers follow later. Just as black integration came through the military, thank you Harry Truman, US gay integration seems headed down the same path. So the military integrate gay rights as the US Supreme Court dithers on how to rule on the nonsensical Defense Of Marriage Act. If Key West can't decide how to cope with waterfront changes, don't worry, the Navy will show us the way. It's that sort of decisiveness that leads to dictatorship too, no matter how many guns you store in the closet, as civilians gradually get tired of civilian leaders who can't bring themselves to act for fear of popularity polls. When the Gods want to punish us, they send us what we ask for. So do I want Navy intervention or not? Umm...