A Reflection On Cruise Ships

Invasion of the Cruise Ships by ALAN FARAGO

A week ago, a referendum by voters in the city of Key West, Florida, resoundingly defeated a plan that would have lead to vastly more cruise ship passengers. Voters came from different points of view; some environmental, some fed up with the ceaseless river of low-brow tourism, but a strong majority agreed the cruise ship industry has harmed the fabled island’s quality of life. What is interesting is that voters were given a chance, at all.

The cruise ship industry is a major component of global tourism and one of its fastest growing segments. In the 1960′s my parents took an expensive Lindblad cruise ship expedition to the fragile Galapagos. While cruise liners had a storied history shuttling passengers across oceans, it was early for adventure travel to a destination made attractive by difficult transit to a unique place. What would keep millions of travelers from visiting the Galapagos, I wondered.

Nothing, it turns out, but supply and demand. In the past half century, the cruise ship industry has matured into a global leviathan, politically powerful and insulated by international law, serving all classes of passengers to every exotic local on the planet with a port to handle the transfer of passengers. What happens to the places and the people, themselves, who live in cruise ports? And beyond the question of people, what happens to the cultural fabric of a place when cruise ships disgorge hundreds of thousands, or millions of people, on a place?

One industry publication wows, “More and more homeports in Asia are now capable of serving large, luxury liners — of note: the number of international liners arriving in Shanghia’s specialty port of luxury ships was 62 in 2012 and is expected to jump to 150+ is 2013.” Venice, Italy had been buckling under the weight of tourism well before the cruise ships arrived.

But what happened, since, has fundamentally altered the balance of commerce in one of the world’s unique and special places. Trinket shops, serving cruise ship customers, have pushed out local businesses on every principal route in the city. Indifferent mass market retail outlets cast an ugly shadow on street scenes. A strange separation prevails between high-end travelers who buy hotel rooms starting at $1000 per night, Americans who can no longer afford four and five star hotels because of the plummeting dollar, cruise ship passengers who pay significantly less, and local citizens who– if they are not landlords or property rich– may appear like dispirited flotsam at the industry’s ebullient high tide line.

So far, the local people are getting the worst of it in Venice as they are in Key West, Florida. The numbers of visitors simply overwhelm the local culture that was the attraction, in the first place. What survives in its place is a hybrid, manufactured experience that retains the outward appearance of the original culture but is otherwise wholly re-fitted to serve a transient mass market. The T-shirt shops, the trinket stands are all outward manifestations of the soft bigotry of low expectations. Not that the industry isn’t working in over-drive to sell its version of careful, sensitive incorporation of cultural values: Crystal Cruises is launching a new alliance with Hollywood’s Magic Castle, with magicians from the world-famous private club coming aboard to showcase and teach secret magic tricks in an uber-intimate setting.

The line also is partnering with the renowned USC School of Cinematic Arts, which brings sophisticated movie-making education onboard, enabling guests to create iMovies on their iPads.Additionally, Carnival Cruise Lines is introducing a new Hasbro, The Game show activity, which offers larger than life adaptations of popular Hasbro games such as Operation, Connect 4, Yahtzee, Monopoly and others presented in a TV game- show format popular in the 1970s. Kids love the excitement of the game show while parents feel a sense of nostalgia for the games and shows they grew up with.

An exciting new “Dancing with the Stars” experience will be featured on board Holland America ships. Six theme cruises in 2013 and early 2014 will feature “Dancing with the Stars” events including dance lessons, a chance to meet the dancers, ask questions and take photos, and a dazzling production starring celebrities and the famed dance pros. In collaboration with PLAYBILL®, the theatre’s most recognized institution for over 125 years and a name synonymous worldwide with Broadway, Regent Seven Seas Cruises is introducing a “Spotlight on Theatre” voyage that will star two-time Tony Award winner Patti LuPone, Tony nominee Norm Lewis and two-time Tony Award nominee Howard McGillin as they sing their hit songs, participate in live Q&A sessions and more.

The cultural erosion caused by cruise ships is inescapable. Cities like Miami and Fort Lauderdale essentially become pass-through locations, bearing the weight of services with little benefit to the local tax base. In Venice, the costs of maintaining an island economy, under stress from rising seas and commerce depending on boat transportation for every activity, are difficult enough. But the essential character of the place — its food culture — has been infected by a kind of lassitude. For the 99 percent, Venice is coasting on appearances, including chefs and restaurant owners. It is not just Venice. What the cruise industry fetishizes — the commodification of culture — eats at the core of community.

Cruise ships cast a depressive shadow over coastal destinations, no matter how many Disney attractions are summoned for support. The industry measures its progress in breathless tens of billions of annual revenue and investment, disgorging passengers as regularly as the geyser Old Faithful. Passengers with passing knowledge of places they visit, have queued in remote airports, packed bags at TSA checkpoints, and aimed through concourses toward the ubiquitous all-you-can-eat buffet. The profit model: feed the customers like crazy, let them out for a walk in ports, buy a t-shirt, but return them to spend more on board. Letting people out for air is what cruise ships do, but for the culture they overwhelm, there is no relief. Local economies only benefit from the cruise ship industry where insiders have managed to figure out how to sluice passengers to their inventions.

The local insiders who spear-head cruise ships need turnover. They need volume, and the profit machine — limited though it may be to insiders — tends to also overwhelm due process and democracy. Allowing citizens to vote on cruise ships, as occurred in Key West last week, is the exception to the rule. The default rebuttal of the cruise ship industry and its assorted parts is that they are only providing what the market wants. Supply and demand. But if simple economics harm the very underlying attractions of place, there ought to be government.

Otherwise, every coastal community that serves cruise ships will eventually revert to the mean: providing walks, carts, and conveyance routes so people can be aired in herds before recollected to eat and spend after tax earnings, aboard. Ocean liners in the early 20th century bore the imprimatur of romance and adventure. Is this dystopian vision of the industry too harsh? Can coastal communities otherwise cope with declining economies like fishing (too much demand, too little supply because pollution and failure to manage fisheries) or end-of-the-road, small scale economies that offer few opportunities for children? What ought to determine outcomes, in the regulation of the cruise ship industry, is maintaining character of place and cultural fabric.

These are tangible, core features of coastal communities that have struggled, often for centuries, for independence. In destinations sought by cruise ships, citizens beware: the industry’s rising economic tide does not lift all ships. Then, too, wisdom on this matter is buried in the groaning expectations of the buffet line. The industry’s belt needs tightening, and only local destinations are equipped to do it. In Key West, for the time being, the voters just tightened the industry’s belt.

Alan Farago is president of Friends of the Everglades.

Posted with Blogsy
Posted by Conchscooter at 8:00 PM 1 comment: 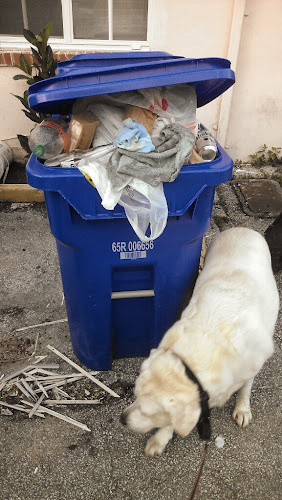 I have no explanation why people would throw trash in recycling and leave their trash an empty: 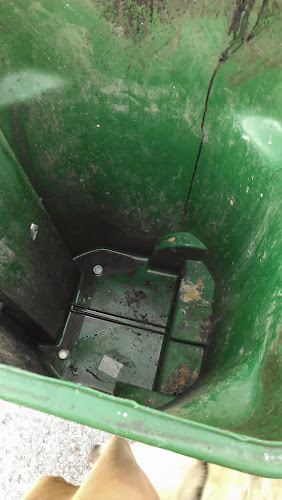 Nowadays recycling is pretty simple in Key West where we have single stream. Clean your cardboard plastic and metal and dump it in one container. That's all it takes. Plastic bags are not recyclable, nor is food or dog shit or rags and cotton waste. How hard is that? 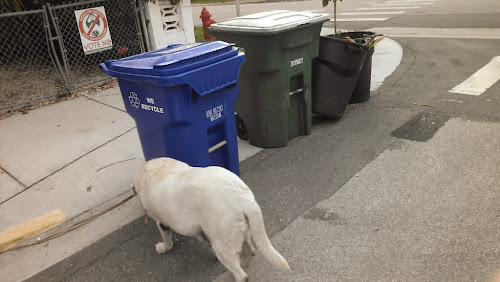 Impossible for a lot of people who live at water's edge on a small vulnerable island very close to nature. I'm not one to imagine that we will reverse global warming or gain Utopia by virtue of recycling, and maybe the whole program is nothing more than a feel good measure for a population that generates twenty five percent of the worlds trash (while generating one third of the world's economic activity I might add!). Nevertheless it is a mark of the lack of any kind of social commitment or discipline that recycling bins overflow with common-or-garden trash every single day across this town. Wherever they be from. 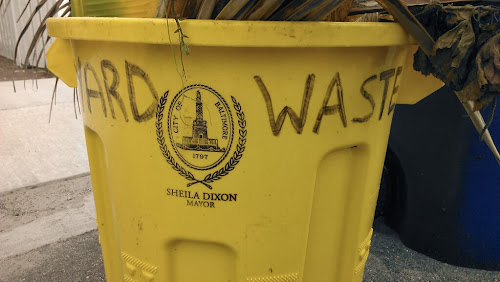 Waste Management finally got the much desired blue recycling bins and at the same time the count commission scrapped requirements for competitive bidding for the waste contract which sounds at best unethical and at worst illegal so one wonders what kind of legal eagles are advising the County. Perhaps that was why when I wrote an email to waste management enclosing he first photograph asking what happens when recycling gets polluted, my reply was a form letter of no apparent substance or decipherable meaning. 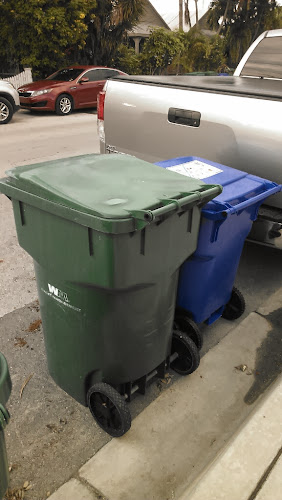 I remember decades ago when a friend told me of an article she had read about how people in New Zealand had to clean and crush cans before they threw them out and we wondered at such strict trash requirements. Since then I have taken to recycling as second nature without much of a thought about it, except when I see stuff that makes me wonder, once again, about the self interest of my fellow humans. Washington State is a marvel of disciplined trash disposal, and if the San Juan Islands can do it, why can't we? 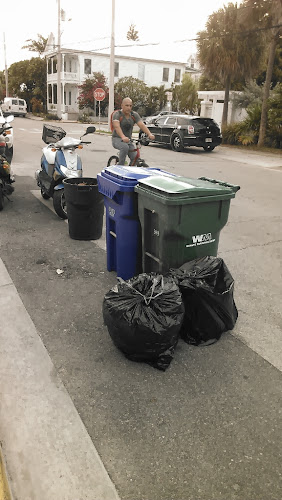 It's not that hard to do, and if it does no discernible good as critics claim, it does no visible harm either as far as I can tell. 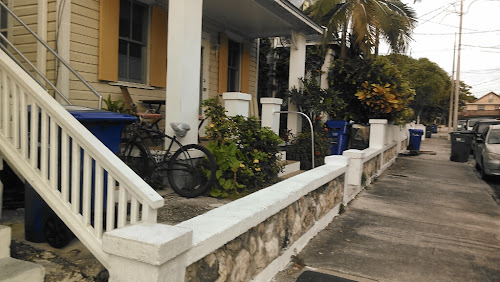 It's time Key West got serious about recycling, as serious as it got recently on the subject of rejecting bigger cruise ships.