I read in the newspaper recently that the solar panels at city hall could provide more than enough solar power to run the building at White and United Streets. There have been negative comments about the array arguing it is ugly and not in keeping with the historic district architectural guidelines enforced on the neighbors. The publicly owned electric utility says the exact amount of surplus energy can't be calculated in advance of the building being occupied but weekends when usage is minimal they expect the city will get a tax credit for surplus energy. Especially if a third array is added which is in the plans. 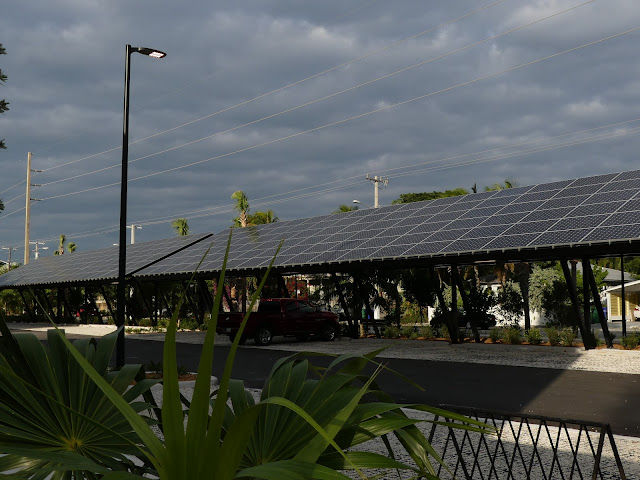 I find it encouraging to see the utility publicly discussing energy buy back programs which until recently had been forbidden by state law. Furthermore the city is now leading the way in actually showing how solar works. It baffles me why there is so little solar energy production in the Keys where the sun shines all the time. One hopes the virus will spread. 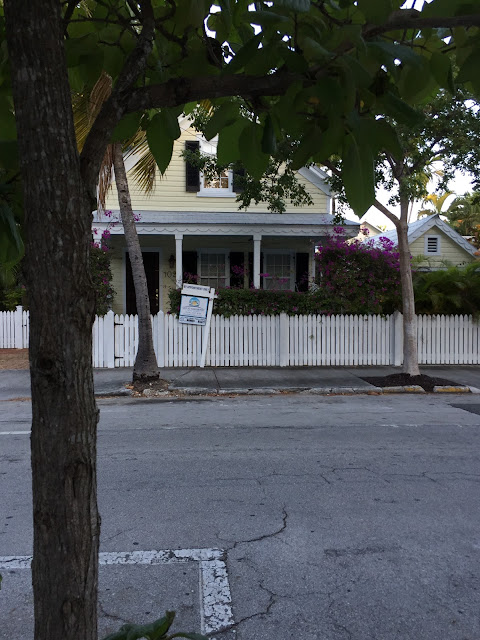 There is a sense this time of year of bracing for the onslaught. There are those people who want to sound like old timers "on the island" (Key West) and they talk of "season" preposition free as though it were an old pal. I suppose in the bad old days  when tourists and money ran out in May and didn't turn the cash spigot back on until December the tourist season was specific. These days "season" is a broad church filled with adherents all year round it seems. Except perhaps in  September and October and November, between the time schools open and the first snows Up North cause people to think tropical. The other nine months are "season" on "the island." (Were I dictator I'd abolish both affectations). 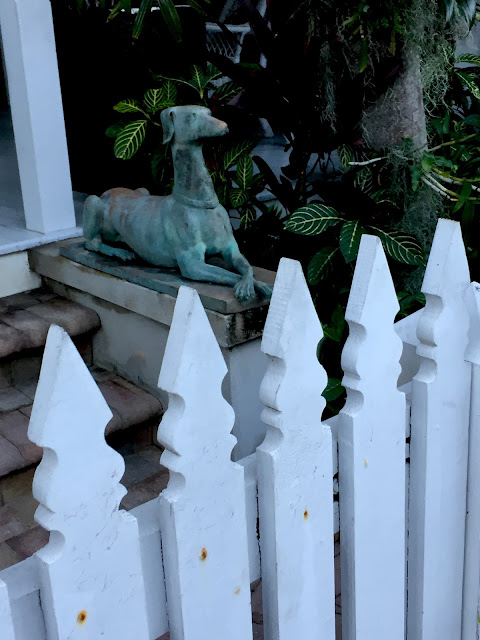 I think that like solar energy we have to adapt to the new reality. We don't think twice about power poles and wires, and all the energy infrastructure we already use. In the not too distant future I expect solar panels will just be part of the landscape and already we see them in quite a lot of places on the mainland. Not as widespread as Germany perhaps but the US is working on it slowly. 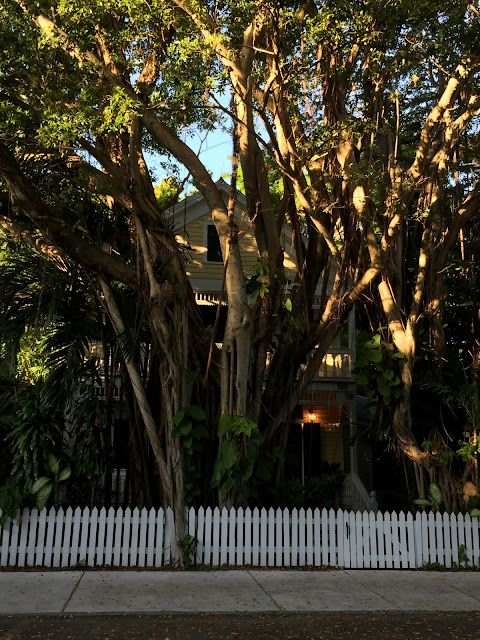 In the same way I am trying to adjust my expectations in reference to winter lines, traffic congestion and entitled attitudes from part time residents who claim kinship with an island city that is tenuous and therefore claimed all the more bitterly. There is no modesty in people who buy residence and let the world know how much it cost. The other side of the vcoin is that certain aspects of travel will be with us year round as more and more workers find themselves commuting. Highway is now filled to capacity year round as people who live and work here seek affordable living closer to the Seven Mile Bridge. The secret of my pleasure living in the suburbs is out and everyone wants to do it. Actually more and more of us have to do it even if not everyone enjoys riding a motorcycle on US One as much as I do. 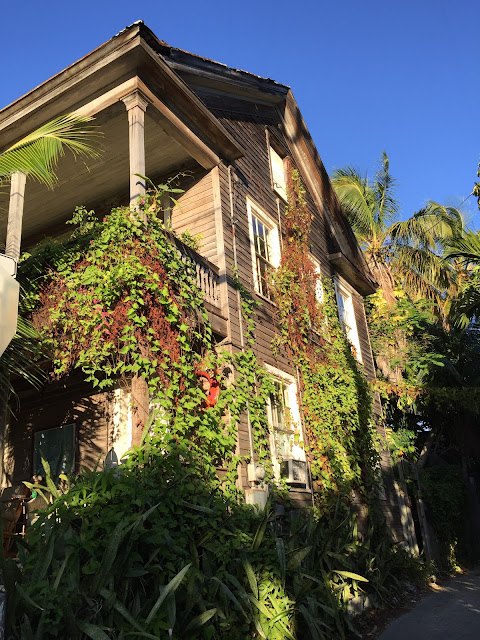 I take lessons from my dog who suffered terribly on the streets of Homestead and who lives a rehabilitated life with hardly a look back. Rusty has grown into a perfectly content dog more self confident than I could have predicted and who makes the greatest companion. 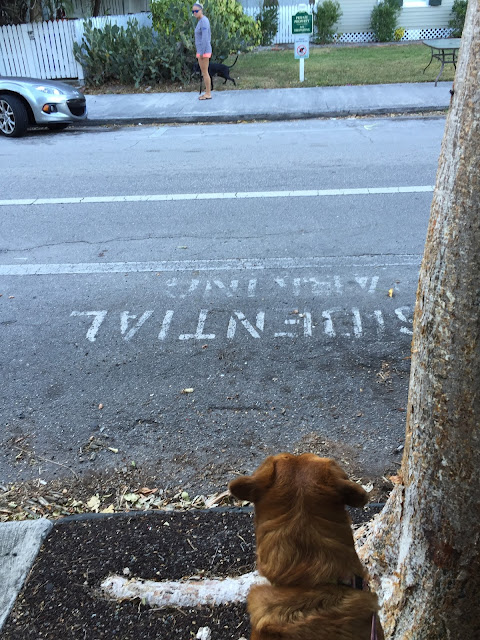 He has boundless curiosity but limited taste for street food. Cheyenne my old Labrador loved finding food. Rusty had two goes at a forgotten slice of pizaa but ended up ignoring it both times. I guess he appreciates my cooking. 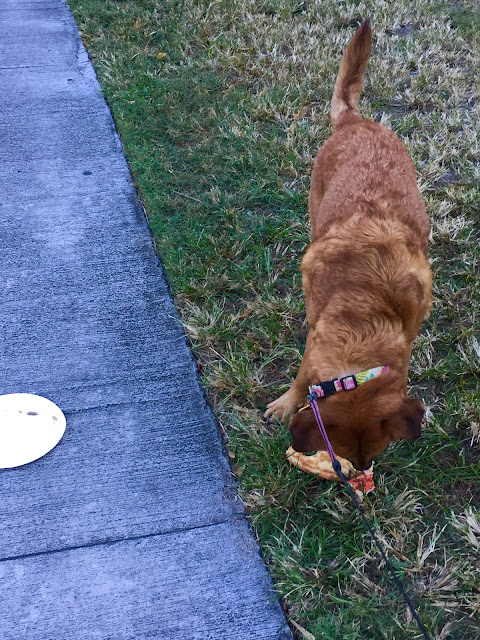 When people express fear that adopting a dog means adopting problems I find myself scoffing. Dogs are tremendously adaptable and they love to please (unlike humans) and with love and training they will become what you want them to become. And long walks are key. People often wonder why my dogs are so relaxed and the answer is exercise. I walk Rusty every day without fail so he not only is relaxed and mentally stimulated he is also quite aware that tomorrow he will get another walk in a different location to avoid boredom and repetition. People are surprised I drive Rusty to different walks each morning after work. It makes for a much better companion. 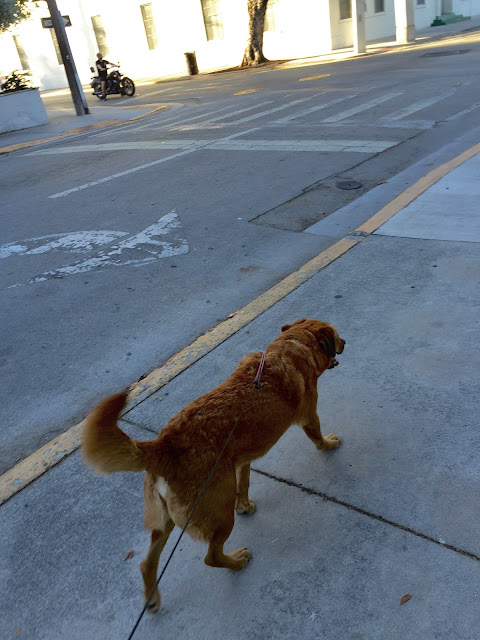 When he arrived from thisisthedog.com he was unable to sleep at night except with one eye open, alert to all sounds. That has changed somewhat. 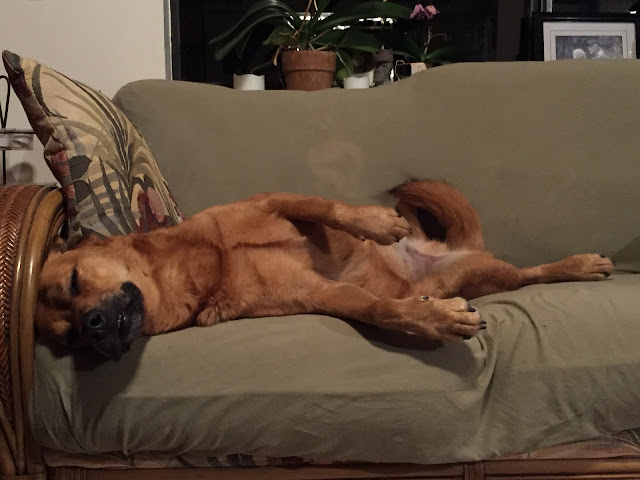 As though on cue I stumbled past "the island's newest micro market."  Three fine cooks to-geaux. 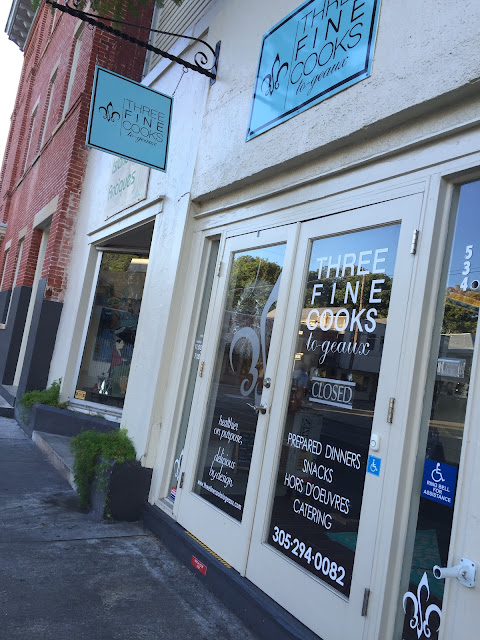 Freshly prepared food for your intimate gathering. I was glad to see they too fail when it comes to using apostrophe's for the plural form's of noun's on their website. Taco's. Dinner's. Hmm when did apostrophe s become the plural version of word's? 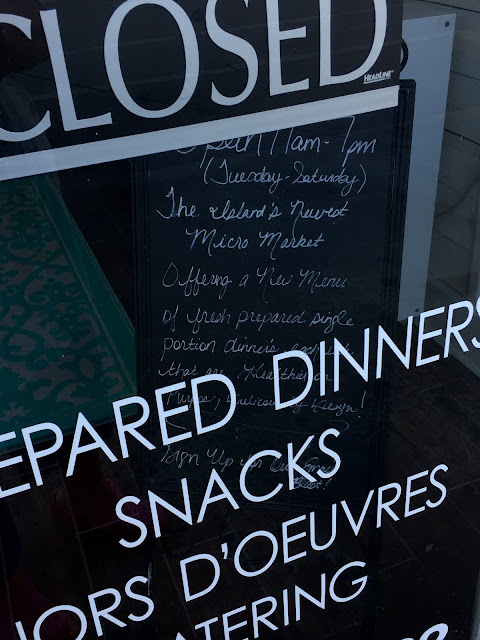 Hoipolloi can shop down the street where prices are also eye watering. The joy of downtown living, and the price you pay for life "on the island." Of course being able to do away with a car cuts down the cost of living as used to be the compromise in the old day's. "Back in the day" another of my least favorite phrase's. 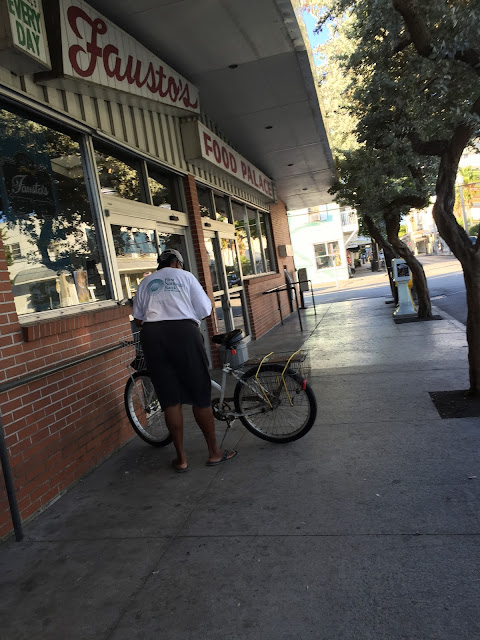 Rusty is oblivious to it all. His bowl floweth over, even as I wonder where it will end, a ghost town of wealthy absentee residents. 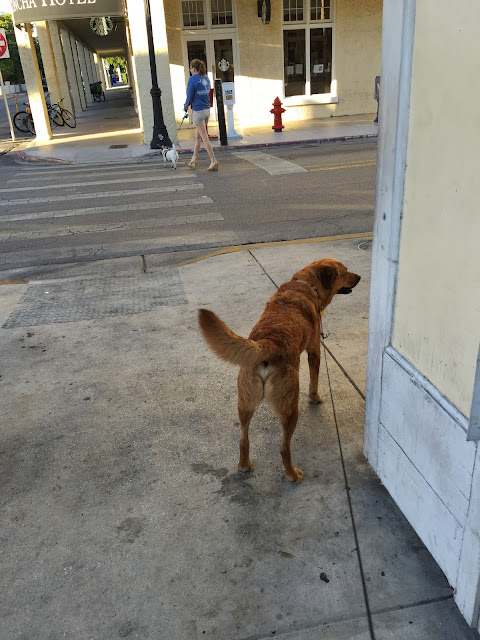 And then I saw a trio of Hondas parked at random Key West's plebian transport. Balance in all things, especially riding two wheels. 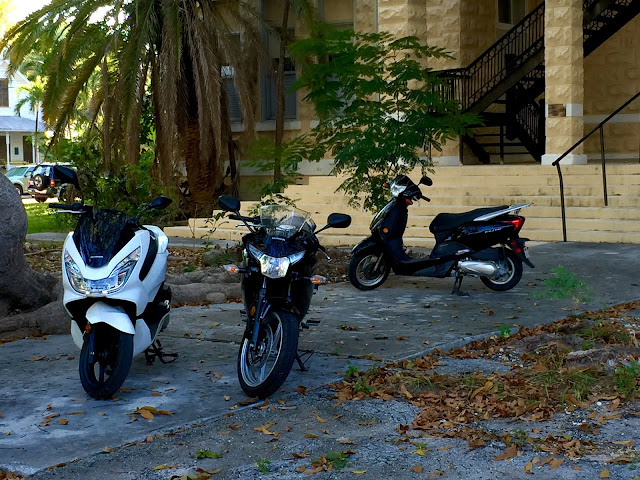 Orange scented salmon. I wonder what that tastes like? I doubt they deliver to the suburbs but still one can dream of to go...
Posted by Conchscooter at 12:00 AM No comments: