I am annoyed, I will cop to that. Friends have been to the new place on Grinnell called Backspace and they were utterly unimpressed. The service they said was lousy, the food uninspired and the writer's schtick not at all inspiring. It's annoying that a bar makes more of the city's literary heritage than the city itself, but this is a bar with no draft beer and it has replaced my favorite watering hole, Finnegan's Wake. That just rubs salt into my over sized wound. 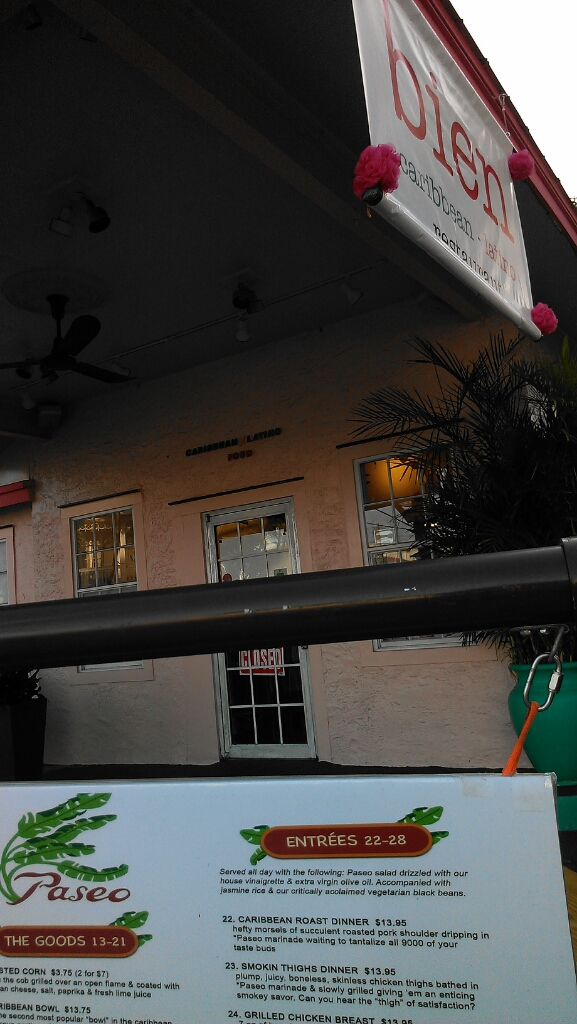 Then there's the mysterious case of what the hell happened at Paseo one fine day? This place opened to rave reviews in Key West with a  genuinely interesting menu without the cute naming process and now its name has changed and its calling itself Bien. Which means "good" in French or something else in some other tongue - who knows? Whats even more weird is the menu boards are still Paseo's which is good as the food is excellent and the parking is still signposted for the old place...trust me to spot that anomaly. 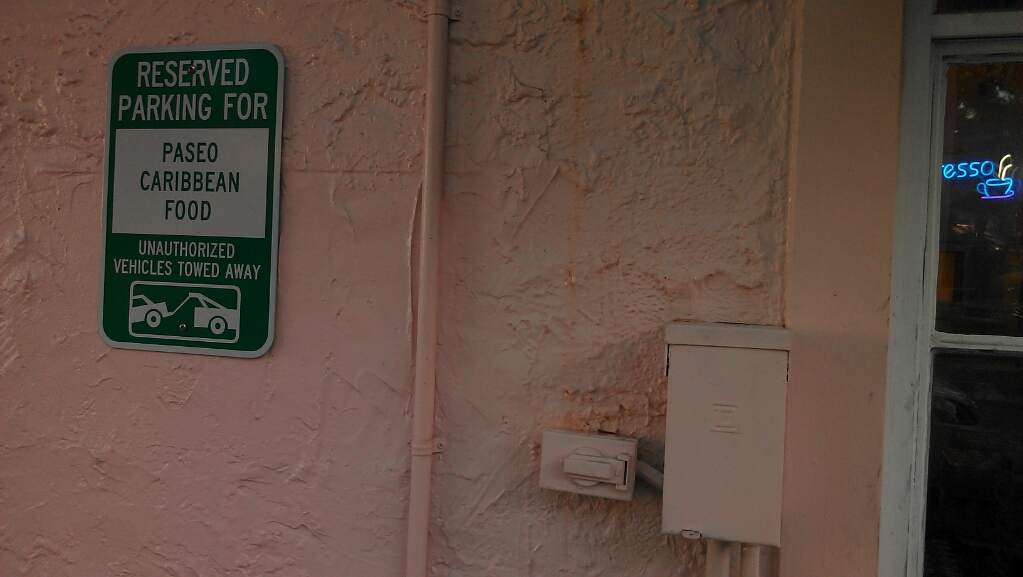 There was a story in the paper a while back that a dispute in Seattle where the two other Paseo's used to exist shut them down. This lot said no problem we are here to stay. Jolly good, everyone breathed a sigh of relief and now they are called Bien. They are part of a whole group of small food truck sized eateries around town that offer quality food at relatively low prices, Badboy Burrito, Cayo, White Street Station, Paseo or Bien, Garbo's behind the Grunts Bar on Caroline and the old time Cuban sandwich shops among which we now add Cuban Coffee Queen. One day I will do a sandwich crawl and it will be led by my dog. 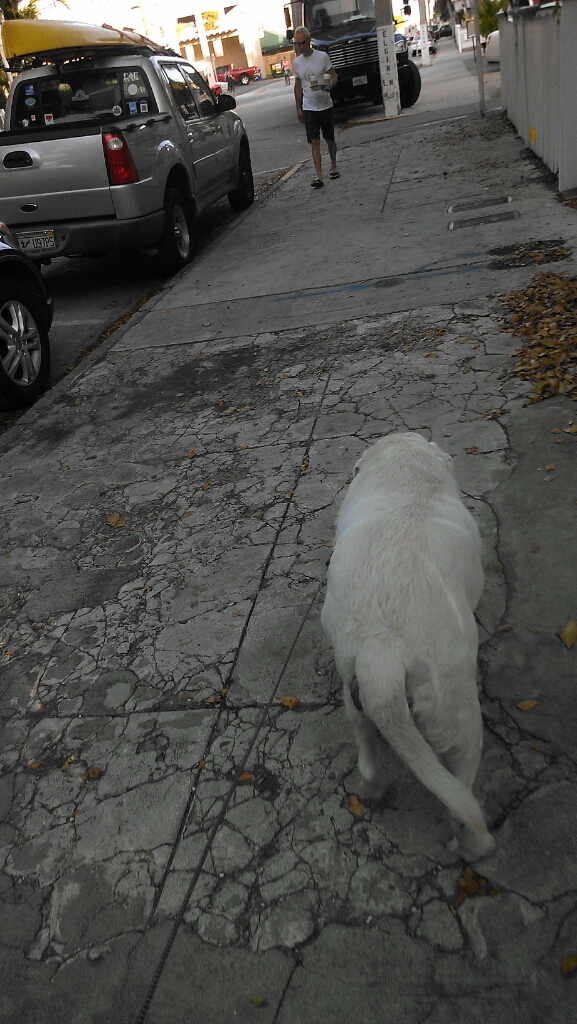 Keys Energy is getting a reconstructed headquarters on James Street and I took this picture below of the non-sidewalk Cheyenne insisted on leading me down. She's like the honey badger, she doesn't give  a  shit the sidewalk is closed she just walks down it anyway. And there in the background is the spruced up building hosing the bar called Backspace. There's a place in hell for those responsible for closing Finnegan's. 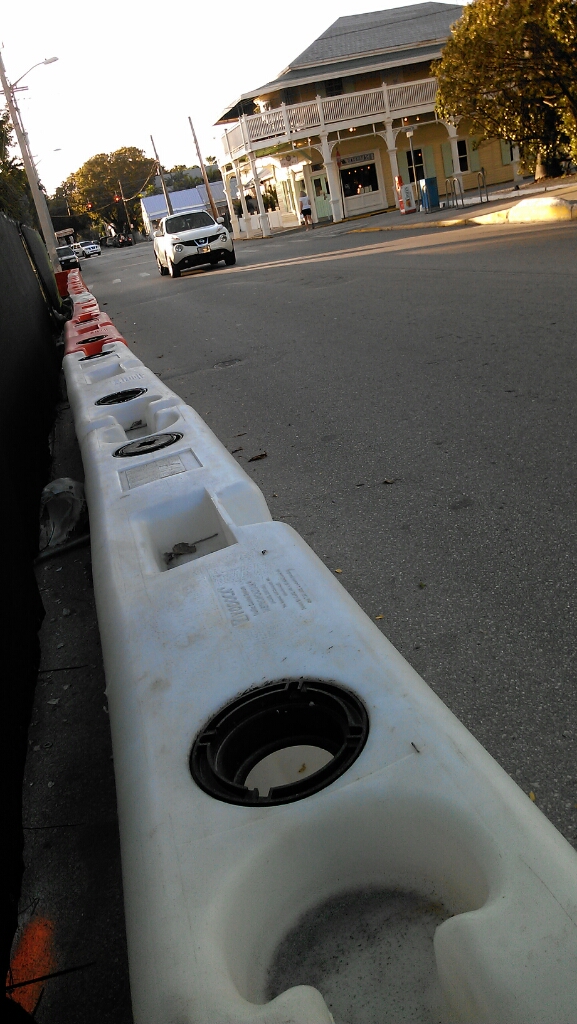 I abhor this trend of sticking mileage charts on the back window of cars. Apparently I am not alone in thinking that marathon runners should shut up and run (I told I was feeling feisty). The sooner all these fitness freaks go back up north and take their public displays of butchness with them, the better off we will all be. Actually I don't mind people torturing themselves, I just don't want it to become compulsory for me I. Don't. Run. Good way to say it. 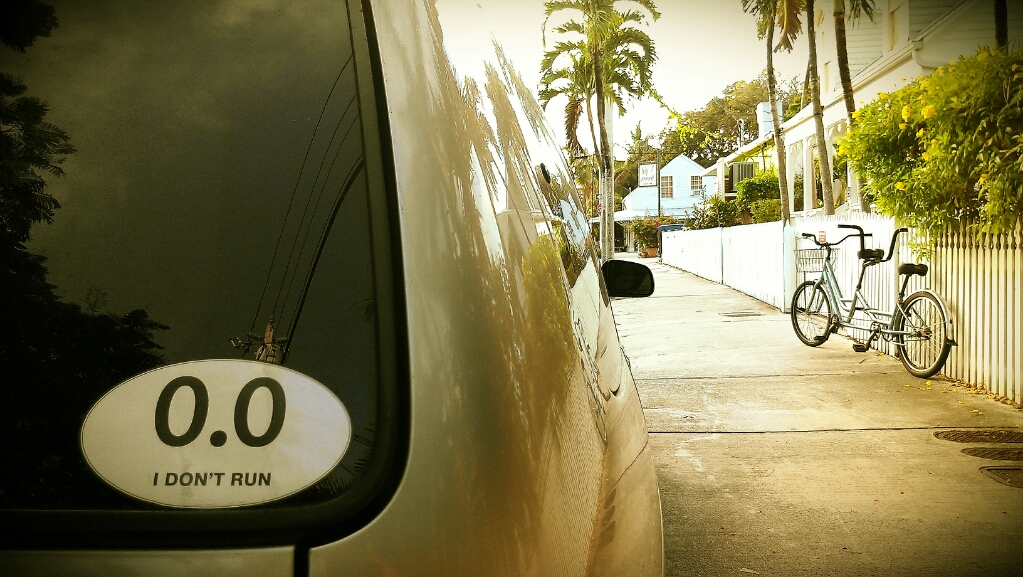 You see a couple talking like this over a fence and phrases like young love....time immemorial ...making a   date flitter through your mind. Most likely she had a blocked pipe and was trying to get a  plumber to show up. 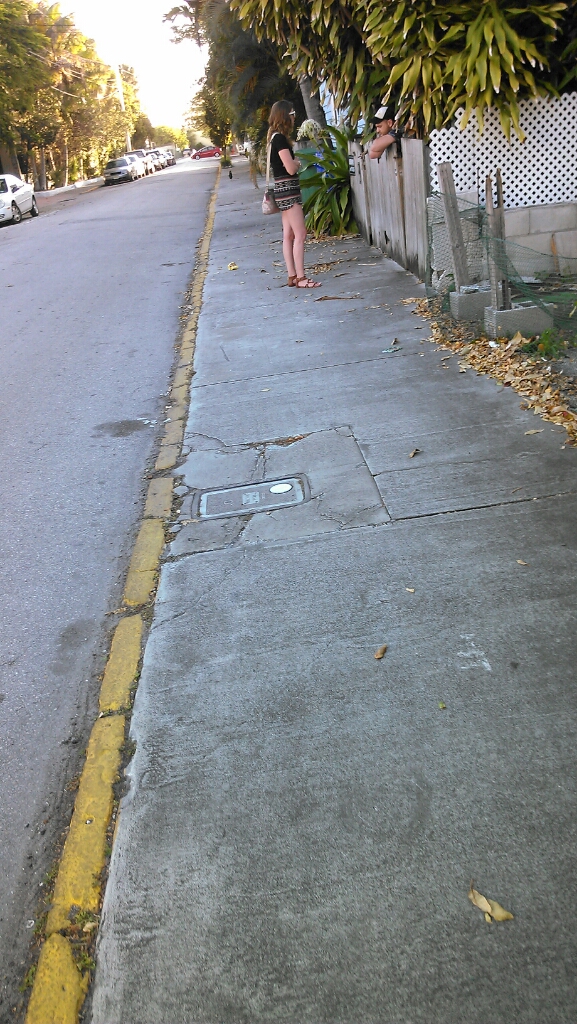 Talking of plumbers my Trainee at work grew up in a family of Key West plumbers. I have noticed that some Conch (pro: "konk") kids seem to veer away from the family business and prefer to become wage slaves in the public utilities or in direct government jobs. My Trainee spent three years helping out in the family business doing plumbing work off and on, as he put it. But he learned to loathe house calls he said. I never really thought about it much but you are at your client's mercy. He told me the story of his cousin who had to go under a house after alerting the occupant not to flush because he was going to break the outflow pipe. Sure enough the home owner flushed at the critical moment and my Trainee was put off plumbing for life as his cousin wiggled out from under the house covered in fresh excrement and wet toilet paper, collected his tools never to return to finish the job. Better to be a  nice clean dispatcher I suppose. I have stopped envying plumbers their trade since I heard that story. Iam content to be in an office chair all night in an air conditioned office. 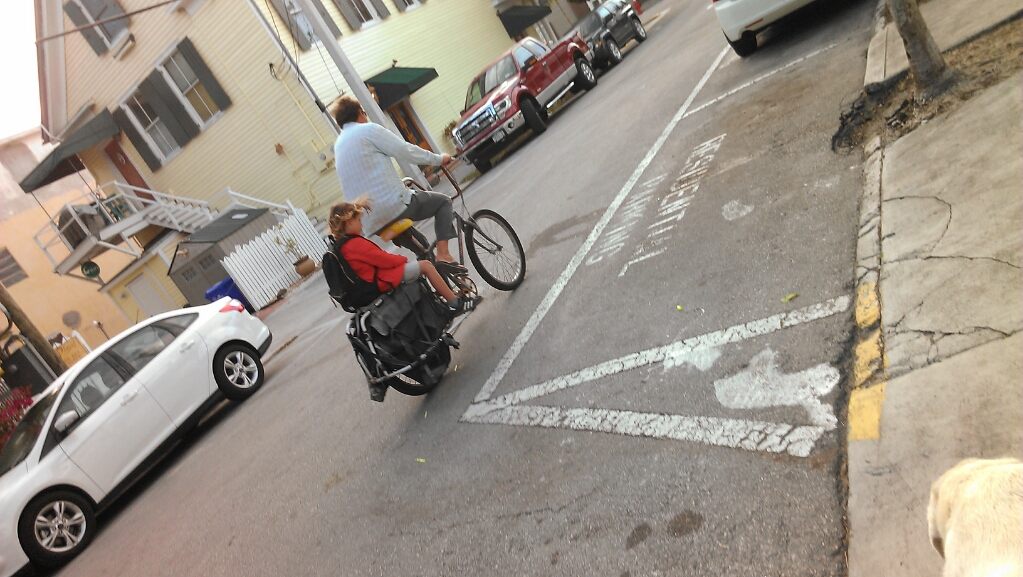 In closing I saw this kid getting a  ride to school one recent morning. I have to force myself to remember that not every school child gets a ride to school on his or her Dad's utility bike in this SUV littered land. Small moments in  the day that remind us why Key West operates in its own reality. Toilets though work pretty much the same as everywhere else.
Posted by Conchscooter at 12:00 AM 2 comments: