It felt odd to find ourselves suddenly sliding into the world of strip malls, national box stores and familiar brands brightly illuminated by the afternoon sun in primary colors. Shreveport Louisiana was illuminated by neon. It felt as though we had spent half a lifetime in the back roads and small towns of Alabama, Mississippi and Louisiana so to suddenly come upon Panera and Best Buy and bright red fast food signs was a jolt. I know I'm not supposed to, because we all prefer regional variety etc... but I was quite happy to feel like I was back in a familiar corporate world. We did our shopping, vegetables at Whole Foods and other stuff at Target and me wandering Lowe's looking for my cheater bar to change my own wheels in the future... Soon enough we were on our way with a tank full of gas at $2.64 a gallon and expectations of an easy park for the night 45 minutes away. 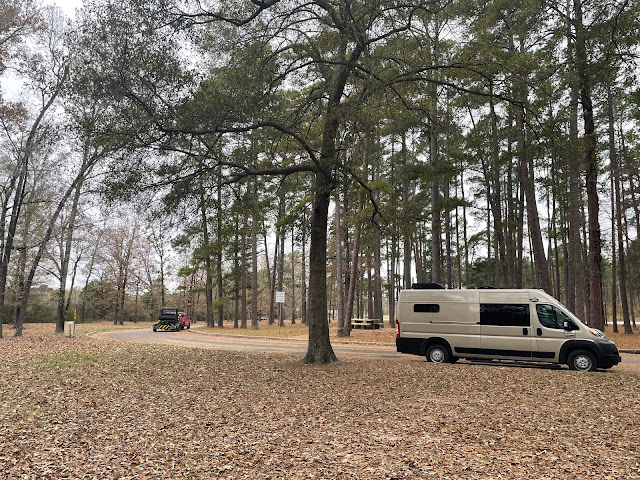 Highway 79 departs Shreveport in a southwest direction aiming at Austin, the capital of Texas, about eight hours away, coincidentally our approximate target. It's a mixture of two lanes with some four lanes and all of it covered by racing eighteen wheeler trucks that would just as soon run you down as pass you. The speed limit is 70 miles per hour so my choice was go 60 and save gas or go 75 and save my life. As you can see above we arrived safely at the picnic area. 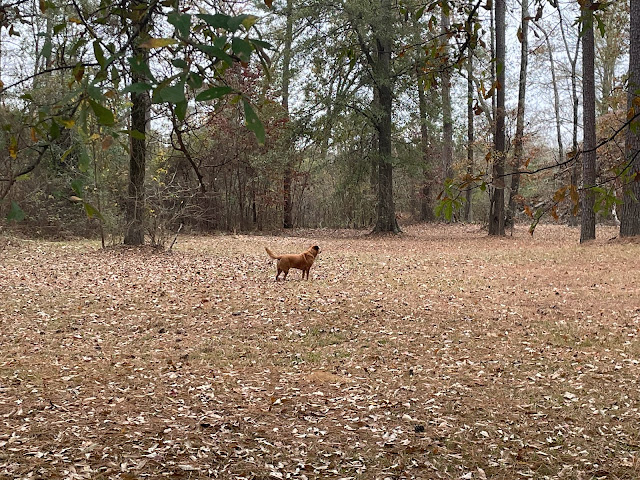 Rusty liked it as empty as it was. We shared the night with two 18 wheelers whose drivers we never saw, nor did I go looking for them. In the morning with 45 degrees outside none of the three of us snug aboard Gannet 2 wanted to get up, not even Rusty who was curled up alongside my legs snoring happily. I had a plan so I got Rusty outside and we went for a stroll in the picnic area. A few pick ups came and went, one guy walked into the bushes presumably either to go bird watching or to relieve himself discreetly, I wasn't sure as I didn't watch too closely. There was a van across the way and as we walked inexorably closer the driver got out and lumbered toward me. "Can you give me a jump?" he mumbled shyly. What could I say? Bugger gave me a hand when I needed it and as a general rule I'm happy to help anyone out. This guy was huge, and taller than me, dressed comfortably, as it were, and my wife was still snugly in bed back at Gannet 2. I was sure she was ready to greet the day by saying Hi to a shambling stranger first thing. "Sure," I said and went to get my machine. Layne was surprisingly calm and stayed right where she was as her idiot husband shuffled around saving strangers. 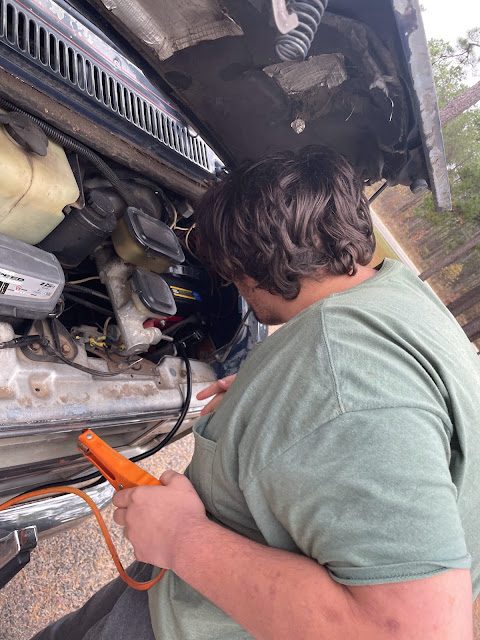 I turned Gannet 2 round in a tight three point turn and we set to the business of getting him going. His name was Randy and he lived "about five miles away down by the Sabine." I looked puzzled because he said that as though everyone knew that the Sabine River flowed here. I had heard of the river: actually I'd anchored in Sabine Lake near Port Arthur thirty years ago so I wasn't doubting him. The day before I had simply been following Google's blue line so I had no idea the river was nearby. He told me he was 18 and was a licensed driver  for just the past six weeks. His mom wouldn't let him drive her van and he had to use the old beater as she insisted it was "character forming," as he put it ruefully. At least you aren't in a VW van I said, thinking back to those many long hours I had spent. stuck by the road. I'm not sure he'd ever heard of hippie Volkswagen vans of notorious unreliability so my allusion to my lost youth went right over his head. VWs are cult objects now but I much prefer my Promaster thanks. 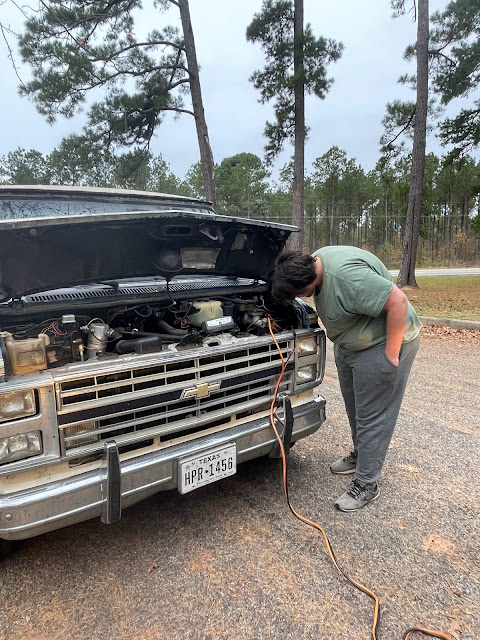 We waited for his battery, which looked brand new, to take a charge off Gannet 2 and he petted Rusty and told me about his rescue pup of uncertain breed that is scared of everything. His step father came into the picture as Randy now wished out loud stepdad had chosen to go to the post office to pick up the mail instead of sending Randy into this uncertain fate. He called his Mom on my phone (his own was discharged naturally) and told her he wanted to come home as the tow truck had said if he left the keys they would deal with the van. It had become obvious to both of us his old Chevy wasn't going to start. He cranked it and the engine turned over but refused to show any sign of firing at all. I told Layne, still in bed, we had a passenger and off we went. 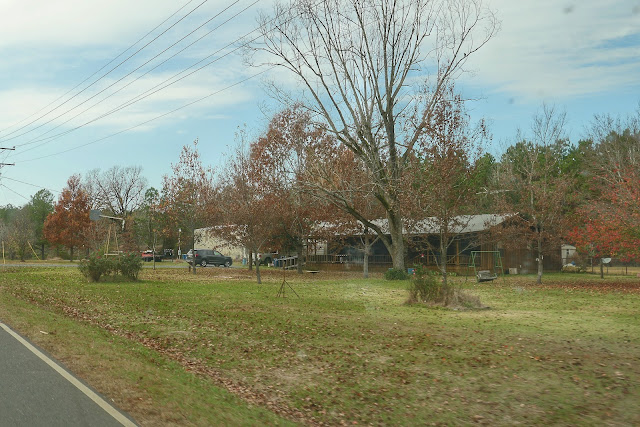 We drove down Highway 79 dodging trucks -"They don't give a shit" my passenger agreed with my assessment of the danger level driving the highway but said his mother took him on a road trip to Houston the day after he passed his driving test and made him drive. How was that I asked, appalled..."A bit rough" he admitted with stoic understatement. Dude I said, I've been driving forty years and these people scare the pants off me. I nearly dropped the van into the ditch as I made another u-turn on the narrow lane in front of his home. Randy pointed to a white structure surrounded by weeds and not much else, "A nice fixer upper," he said wryly. I said nothing about the rainbow flag in a window figuring it wasn't his stepfather or his dog that were flying it. He shambled off and disappeared. In my head I wished him well but wondered about his prospects. 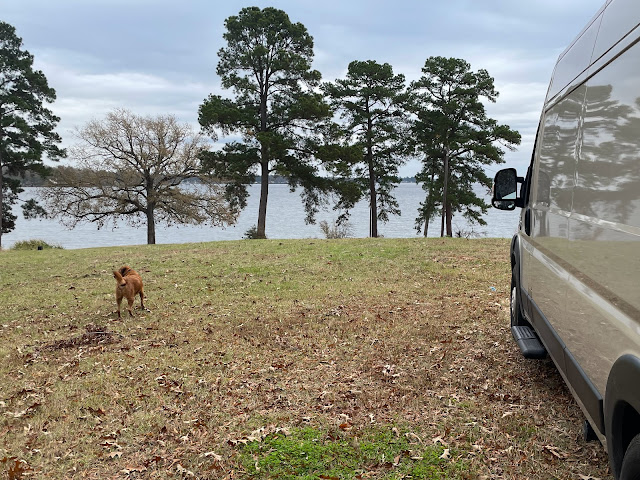 We pressed on with a choice ahead of us. The weather wasn't promising great heat but the rain had apparently passed on south of us. I suggested we stop in just half an hour at Lake Murvaul in a park flagged on the iOverlander app. The approach road was a bit torn up as advertised and  of facilities there were none except picnic tables and trash cans. We had previously emptied our portapotty in a pit toilet at a nearby boat ramp so we were set for a couple of days of no driving. And we had this place to ourselves! Free, gratis and for nothing. There weren't even any rules posted so we applied the universal rule of common sense. There wasn't even much trash outside the cans. 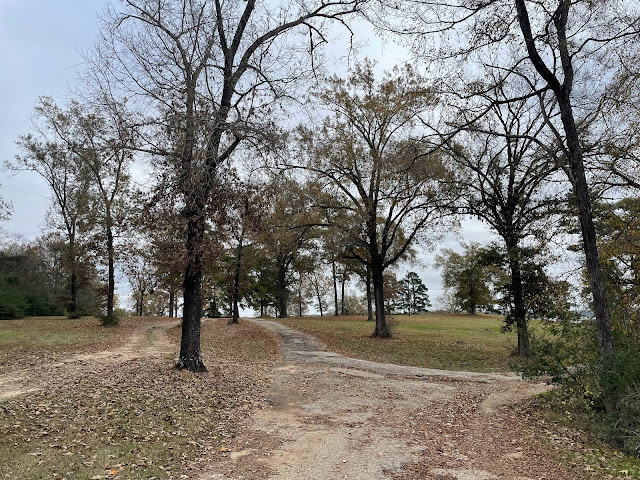 As you can imagine Rusty loved it. We walked together for a while and he sat around and watched the birds in the air, the boats on the lake and the sound of the breezes rattling the leaves. 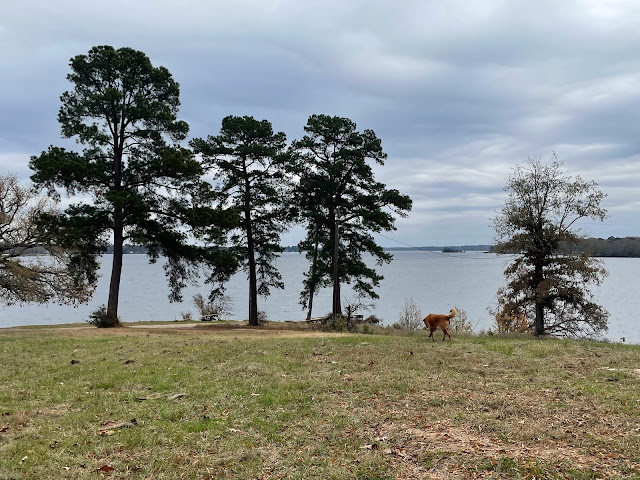 He gave me a big kiss before we set off for a circuit in the afternoon so I know he really liked this place, as that is how he shows joy. 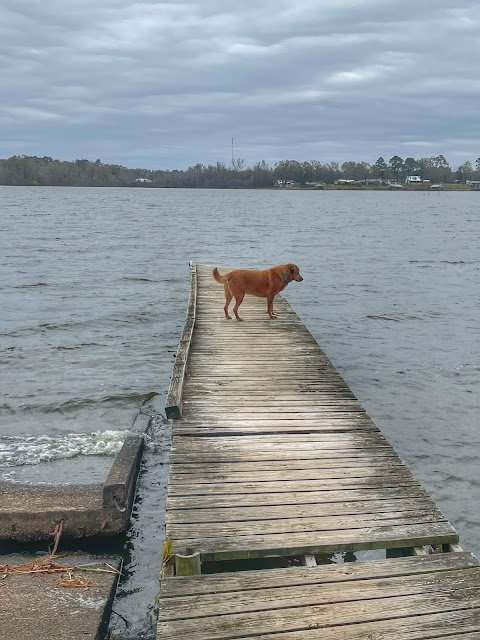 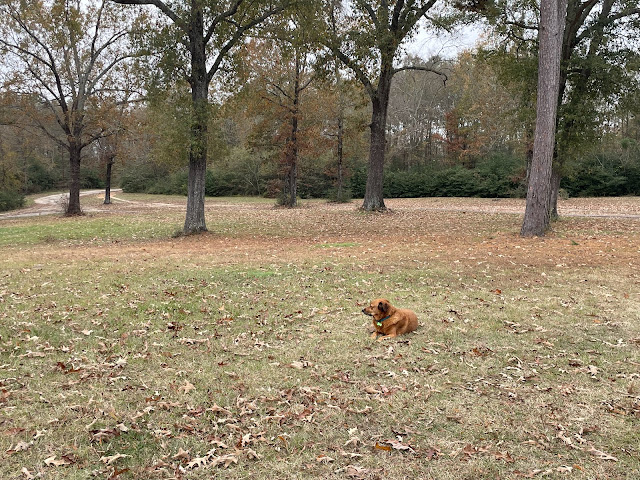 Yesterday started out overcast and breezy and cool but we decided it was time Gannet 2 got a proper clean so we declared it a make-and-mend day in the tradition of the Royal Navy and we spent the middle of the day scrubbing and brushing removing dog hairs from every conceivable orifice. We planted the portapotty in the light of day and scrubbed the shower compartment and the mats and so forth. It felt really good. 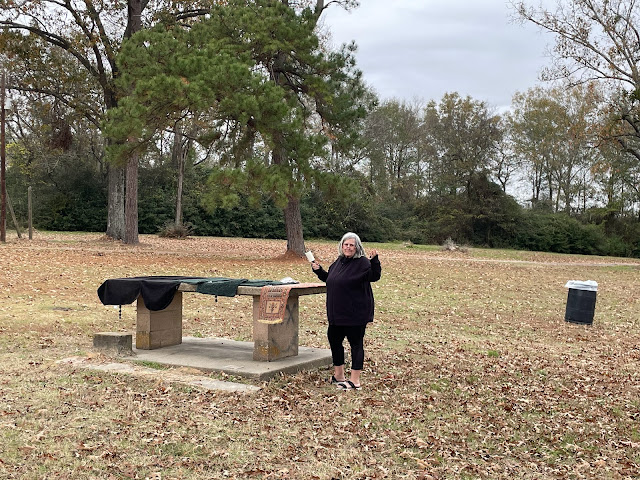 Layne checked her supplies and discovered Rusty is living high on the hog so we need more food for him. He is adapting to van life even though travel motion itself doesn't seem to agree with him. He loved the freedom of Rosie Jones Park. 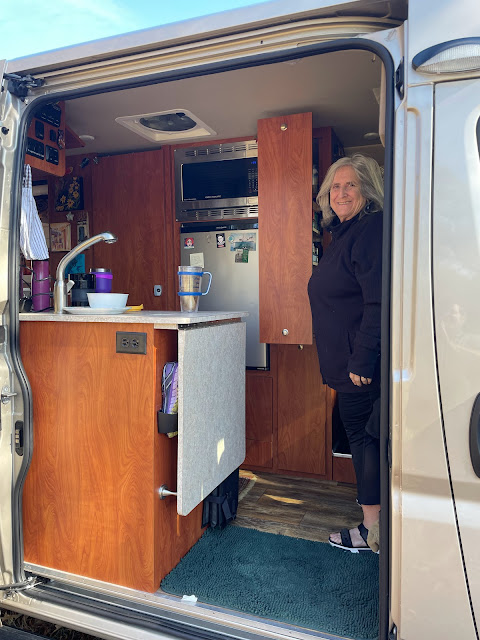 Mind you it doesn't take more than two hours to do the deepest clean on 70 square feet. A brush, a vacuum cleaner and some spritzing and rubbing and it's done. 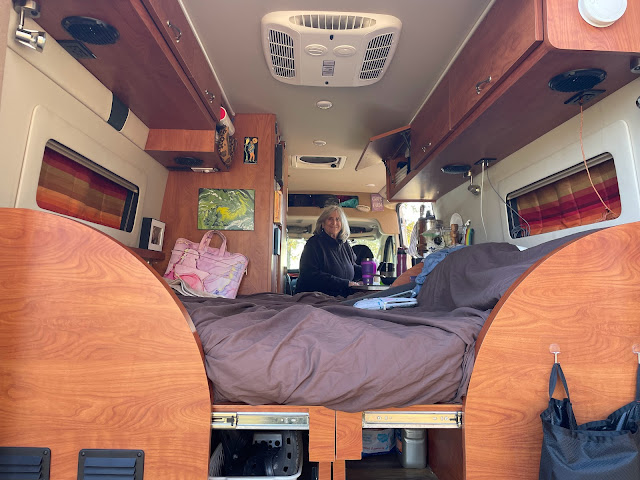 Rusty kept watch for us. 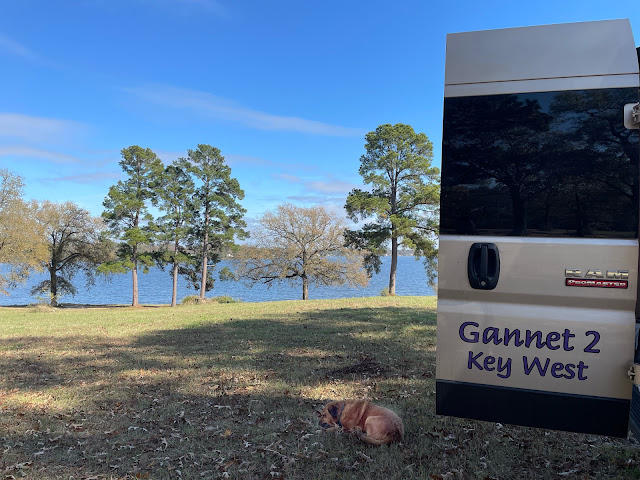 Layne has lined up a couple of harvest hosts, olive oil and cider related  around Austin with the possibility of checking out some barbecue to go. I like Austin from previous visits  but we are still being cautious about indoor dining and being around music crowds so our route is mostly rural for this part of the journey. Personally I'm looking forward to seeing Rusty's reaction to the deserts of the southwest. I'm betting he'll like the open spaces. For now there is no hurry, we're retired. 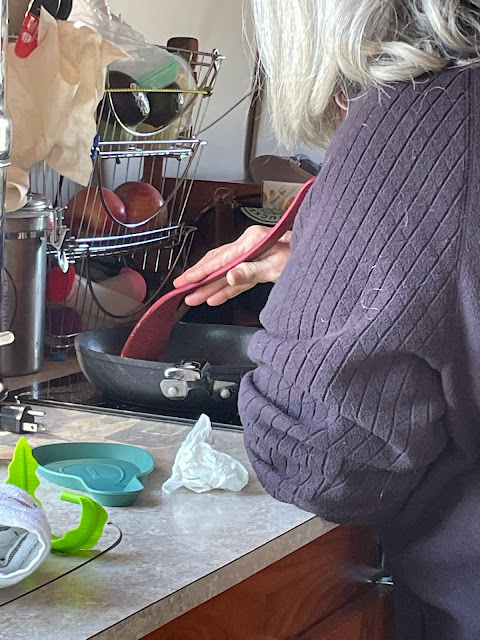 Induction cooking underway at 60 amps with burritos for dinner I'm told. Happily our batteries hold ten times that and after all the driving we are fully charged. 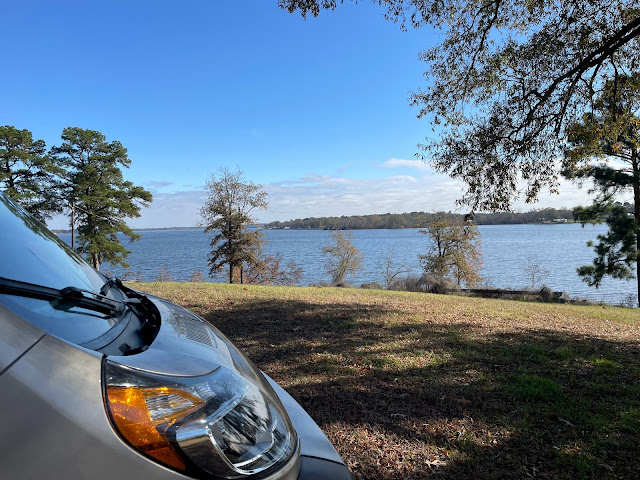 I really like van life.
Posted by Conchscooter at 1:00 AM 3 comments: