In the middle of the day I generally take Cheyenne out for her second walk of the day and driving into Big Pine I saw a notice never before seen on the south side of the highway. 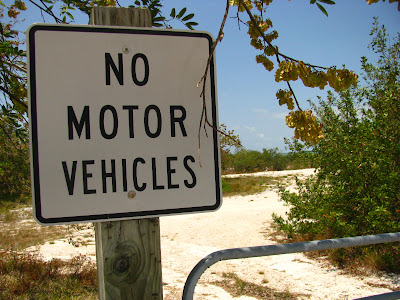 Using the brilliant deductive powers for which I am known it occurred to me that if motor vehicles were not allowed, foot traffic might well be. I pulled a u-turn and drove back to the side of the highway. And indeed just yards away from all the traffic was a piece of open space. 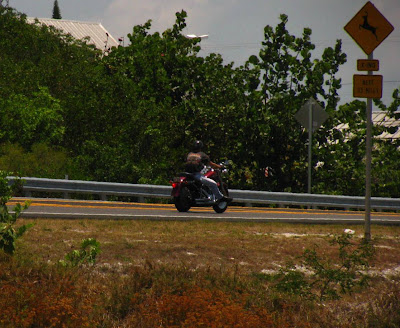 That I had not previously realised there was, what amounts to a salt water swimming hole at the south end of Big Pine, is a measure of how much one gets into a routine driving past the obvious. 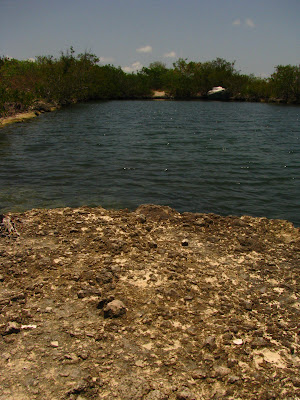 It looks like another of those failed developments hewn from the living rock once again and somehow this piece of wasteland has fallen into public hands. Which means there are Rules. 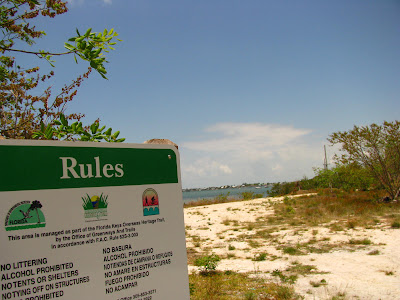 Largely ignored as far as I could tell was the notice that there is no trash can and one should pack all one's trash. Local beer drinkers find that one impossible to follow judging by the numbers of cans lying all over the place. For all that there is trash there is also serenity in this unlikely place. 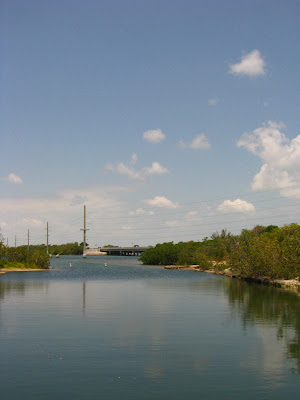 It could make a good place to tie up your home, if your home happened to be a wreck of a boat called of all things, Prince Albert. I was forced to wonder it's owner were dead or alive, in jail or had emigrated back Up North. 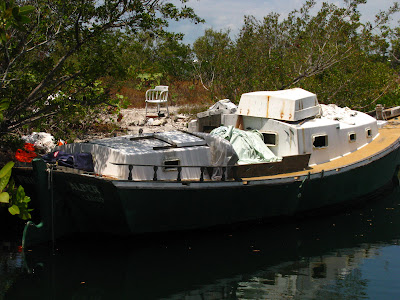 It was a floating wreck in any event, cluttering up a pretty spot. 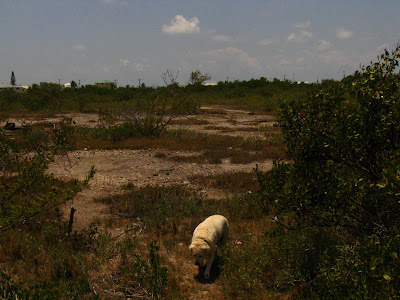 The mud flats were dry as a bone so Cheyenne took off to check out something extremely dubious. something for everyone at this bizarre little "park."
Posted by Conchscooter at 9:01 PM 3 comments:

This photograph is a test, which thus far I rate as successful! Why? Because I downloaded the picture to my iPad and composed this short essay on the tablet and published it accordingly. For a Luddite like me this something of an accomplishment, and thanks are due also to my wife.

The way I did this was to download the Photo Log App(lication) for two dollars and through that I downloaded the picture and published all in one on Blogger. The sudden appearance on the blog of a photo unaccompanied by text was a bit disconcerting but this is nearly days yet and I know I can move out of my comfort zone and use the tablet to make this page more immediate, and that is my intent.

The iPad 1 is a remarkable thing but it is my hopet to make best use of it to improve my ability to take and download pictures and text at will. This is just the first tentative step. I have much to learn and beg your indulgence as I study. For instance: how to center the picture...
Posted by Conchscooter at 5:01 PM 7 comments:

"It rained at my house," Kristi announced at work and she lives just outside Key West. She must be doing a rain dance because it doesn't seem to raining anywhere. 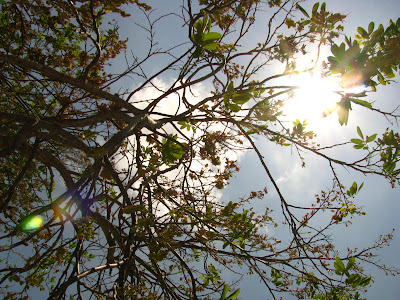 Karl says there's a good chance of rain this next weekend which suits me as I'm working and it will keep people off the streets if we get a nice downpour. I'm tired of hearing that we need rain but it's excessively dusty and dry. It looks like the trees are dying again. 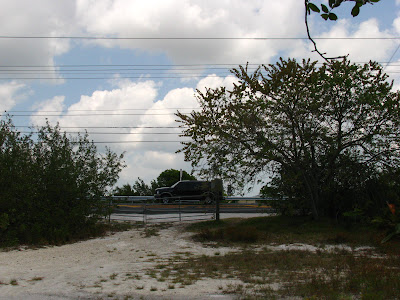 we got a burst of greenery when it was supposed to rain a few weeks ago, and those leaves shrivelled and a second round burst forth and they are in the process of drying up too. Our drinking water is pumped from the mainland where there is a huge aquifer under Miami so as far as drinking water goes we are doing all right. There's plenty of water down here but not much of it is drinkable. 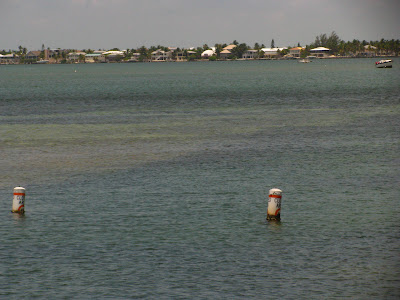 The tides were pretty high with the last full moon and we got some inundations of the mangroves but the rains are just being coy and staying away. 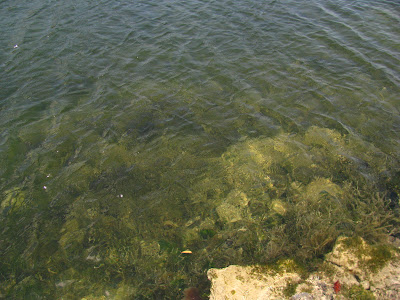 I read about the tornadoes killing people across the Midwest. Danette writes about endless rain in Colorado and temperatures in the Pacific Northwest seem absurdly wintry while Alaska had a a no snow winter and people say climate change is a fantasy?
Posted by Conchscooter at 11:01 AM 5 comments:

I tried to make the most of the wintry cloudy skies the other day and get some pictures that don't look like my bright cheerful pastel colors of normal sunny days. 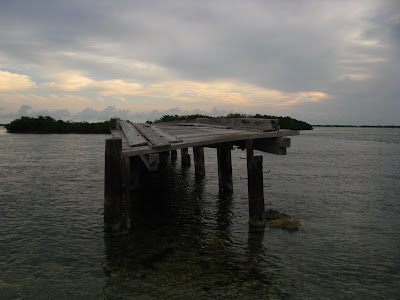 The north end of Summerland Key looked foreboding as though a snowstorm were in the offing. 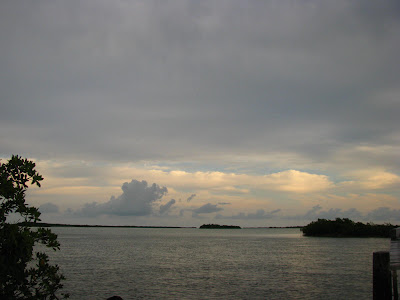 later I went to West Summerland Key (which is far to the east of Summerland for some reason) and got the same gray effect. There is a road sign that calls this island Scout Key, perhaps for the scout camp located on it. I am slow to change and Scout Key will need to be around a while for it to take root in my mind. The arches are the hundred year old Flagler bridge still standing. 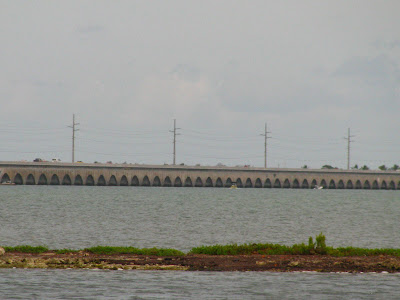 With a bright splash of yellow center console hull to break up the grayness. 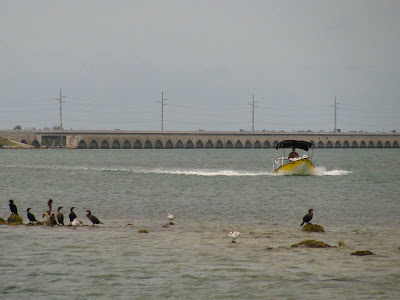 The catamarans at Bahia Honda state park anchorage even managed to look drab and gray under a sunless sky. 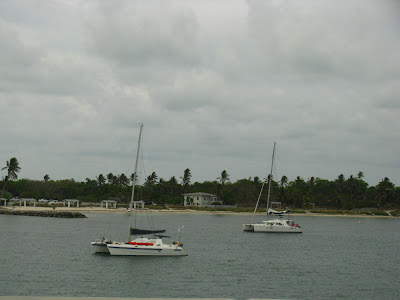 What an odd effect a summer day has without the sun.
Posted by Conchscooter at 5:01 AM No comments: 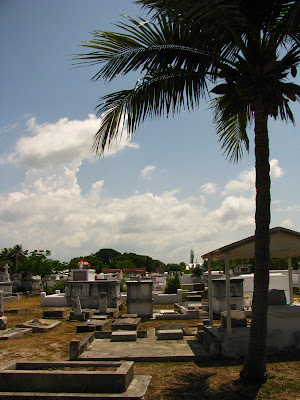 It's not every city that has an above ground burial site as picturesque as this one, but Key west does. New Orleans' cemeteries are more famous but Key West has the same problem of a high water table making it difficult to bury people in the conventional Western way, deep underground. 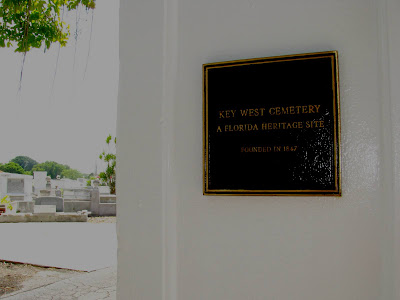 The original cemetery near Higgs Beach was washed away in a hurricane which left bodies and coffins in an unsightly mess so the city moved the cemetery to the edge of town, in the middle of the island in 1847. That the city has spread and surrounded the cemetery is just a measure of the passage of time. 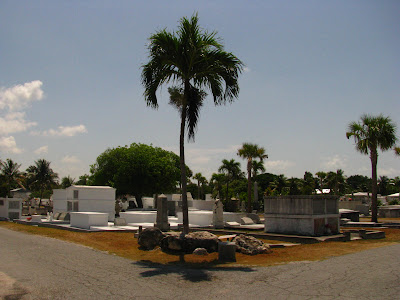 The cemetery is 19 acres in size and has various different ethnic groupings scattered around. There's the Catholic corner and the Jewish corner, the everybody else middle and a couple of fenced off bits for the Cuban martyrs and the sailors of the USS Maine. 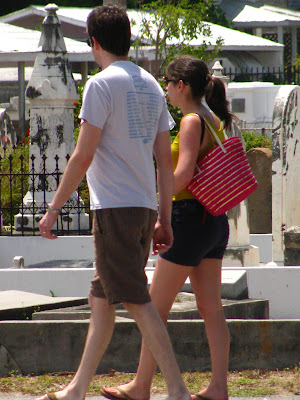 It's worth a walk as Key West history is on display here among the many family plots. My wife and I took a guided tour by a docent from the Historical Society which was quite fascinating. 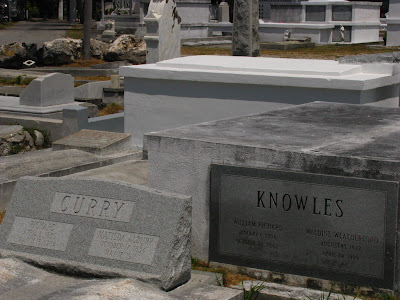 Curry and Knowles are two well known family names in Key West, but there are lots of stories in this graveyard worth telling. A proper guided tour is well worth the time for anyone interested in the past of this City.
Posted by Conchscooter at 12:01 AM No comments: