I am not a clubby kind of rider, but my hat is off to a whole group of English riders of scooters who have made a not inconsiderable effort to cross much of Europe, most of them on two wheels, to attend World Vespa Days on the Adriatic Coast of Croatia. While the idea of riding in a group, drinking in a group and camping in a group doesn't suit my loner temperament at all, the idea of a 1300 mile ride across Europe using a patently "unsuitable" touring machine certainly tickles my taste for adventure. It turns out some scooters broke down but so did vans hauling some of the scooters to the event! This guy rode on a Vespa newer than but similar to mine: 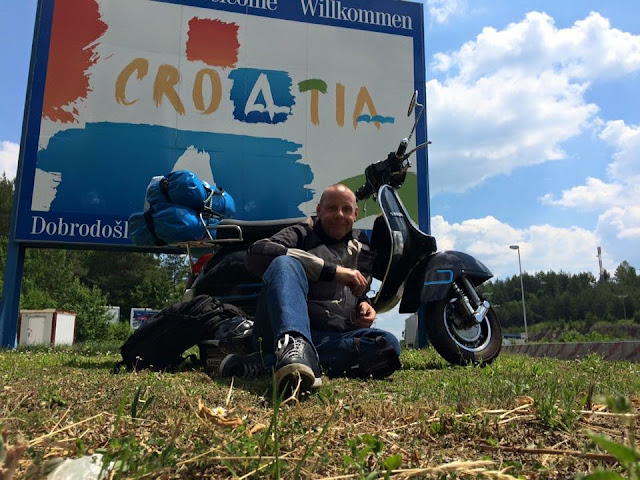 The parent company of Vespa scooters, Piaggio is not known for its collegial support of owners of it's vehicles but from early on the factory organized clubs and rallies to promote its scooters. Now, sixty years on they are still doing it. The pictures I have reproduced here come from the webpage of the Vespa Club of Britain Journey to Croatia which has photos and comments from members on the road and in the peanut gallery back home. 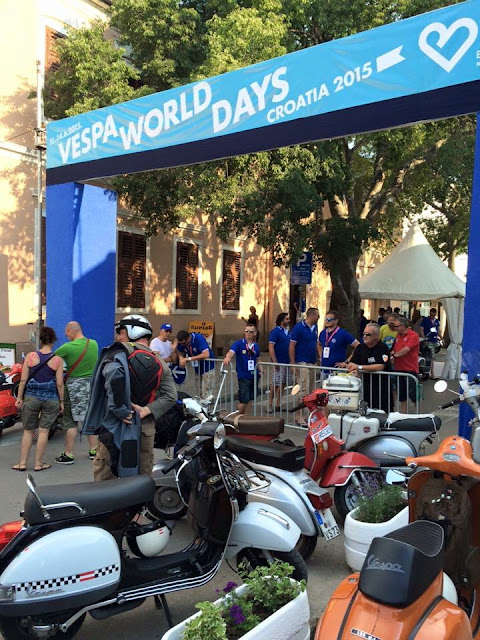 The thing to realize about these riders is not only their dedication to their low powered scooters but also to their willingness to step outside their cultural comfort zones. These are not necessarily people who criss cross Europe on a whim and my hat is off to them for taking on a journey that may not involve customs and borders anymore (Croatia is in the European Union) but retains a great deal of foreignness for people who live on an island, drive on the other side of the road and drink beer unlike any other nation's. They do the best they can and make do:

Yet these intrepid riders took their machines and headed out and if you read the comments they are having the time of their lives, the ones that aren't breaking down. 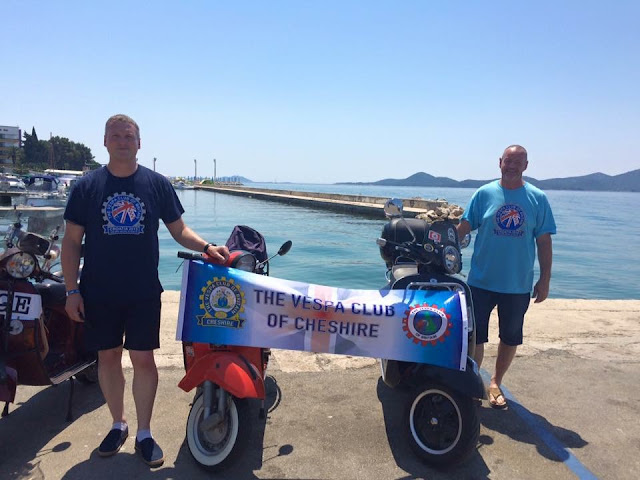 Croatia was one of the countries that made up the former Yugoslavia and that inherited a fabulous chunk of coastline that everyone should enjoy. My wife and I drove it in a car (boo hiss!) a few years ago and really want to go back. 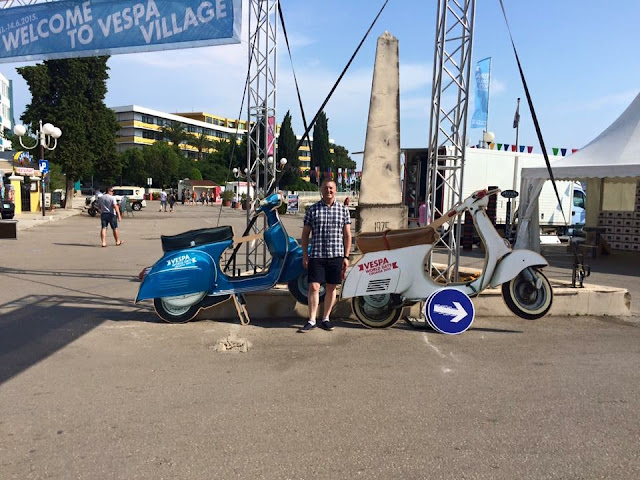 The rally is a town called Biograd na moru whereever that is but it looks like fun riding. 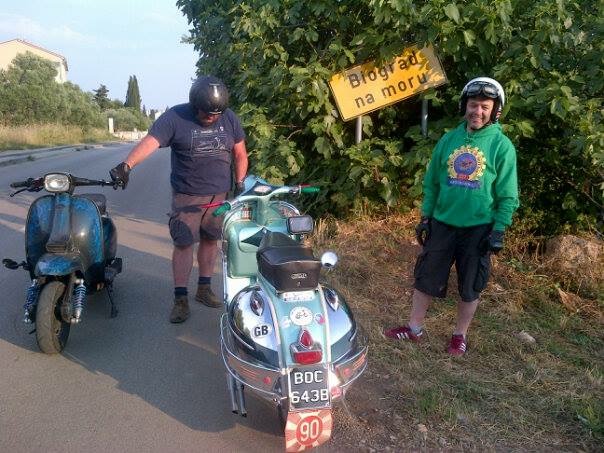 I don't know what engines are powering these lovely old Vespas in the photo below but if they are original they have a top speed around 50 mph so I would not be surprised if they went to the rally by trailer or van. Not all vans did so well either. We call this a  wrecker, the English call it "recovery" and either way it costs money.

However a lot of Vespa riders in Britain refuse to go to these events at home or abroad except under their own scooter power, so this dude putting on sunscreen may have ridden all the way for all I know. The English are martyrs to the heat of southern Europe. 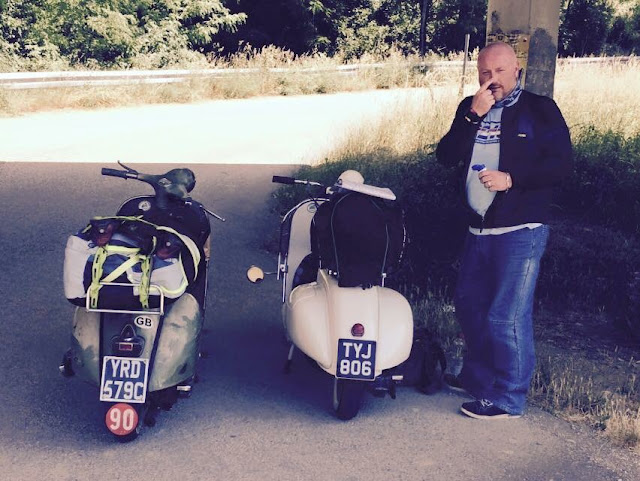 I drew a rough Google map to give an idea of a possible route, 1300 miles over  24 hours in a car...Imagine that on a ten horsepower ride chugging up over the Alps to get to...the other side! Intrepid riders. 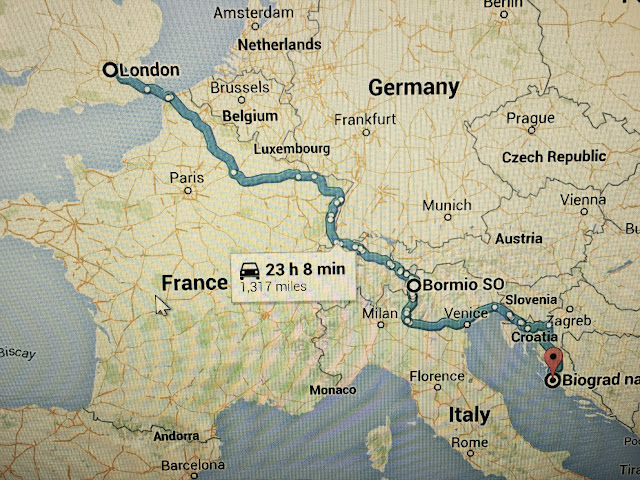 Because they are Vespa World Days you can imagine there are scooters from all over the place heading to this jamboree but I went with the British website for the lack of barriers to communication. Of course the British riders start with the over-the-water problem of living on a real island. In this case we see a scooter and an unrelated "proper" motorcycle using the train that takes the Channel Tunnel to go underneath the water complete with cell phone service apparently: 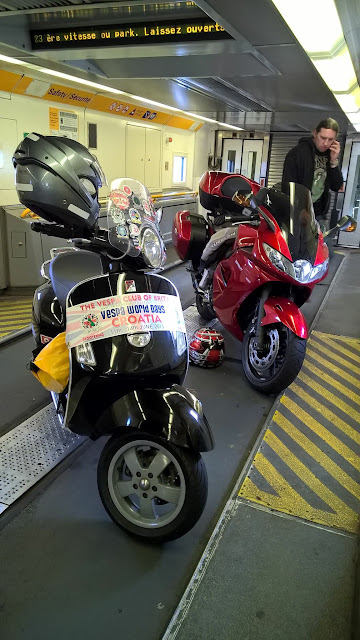 Lots of pictures of Vespas and mountains as the riders made their way south, a mixture of modern and ancient scooters all being ridden: 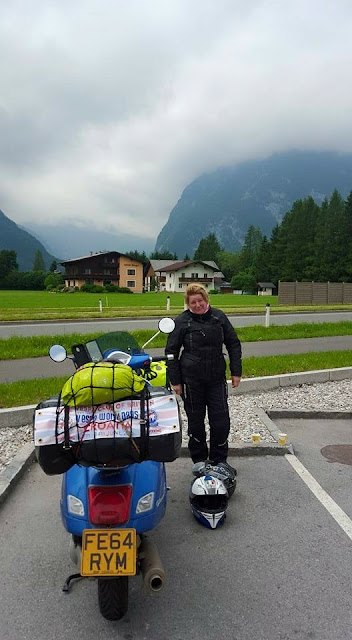 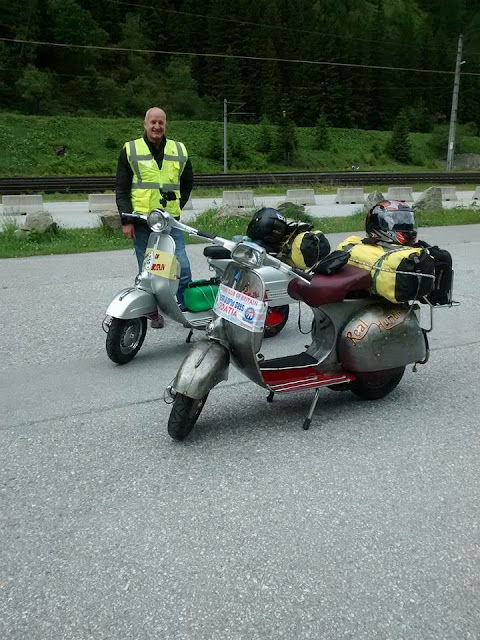 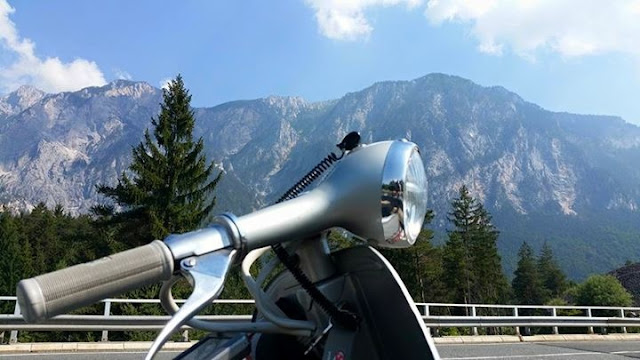 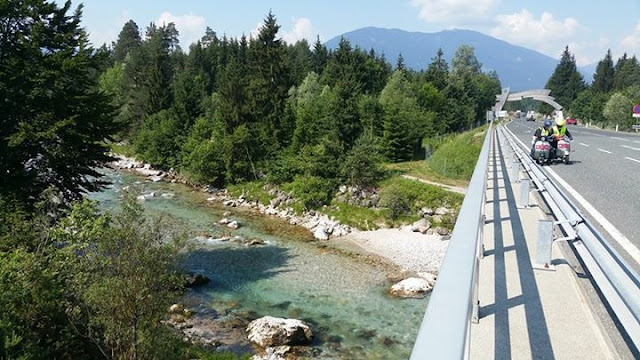 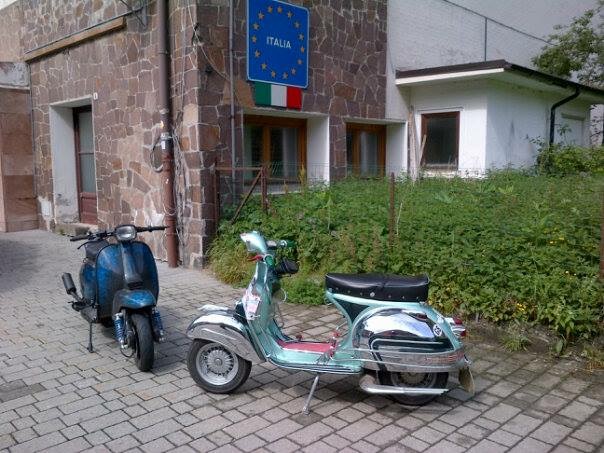 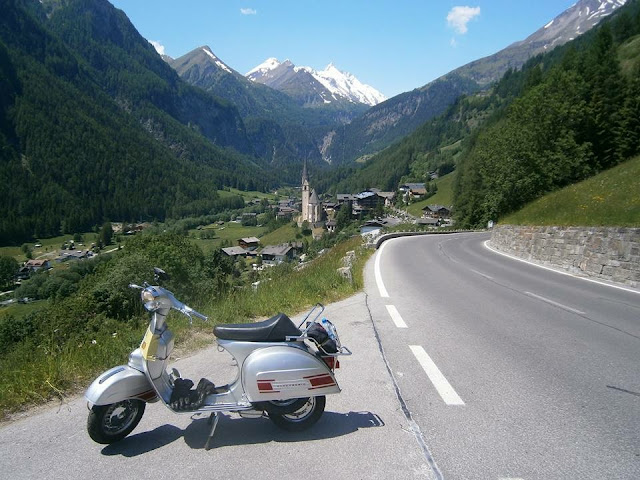 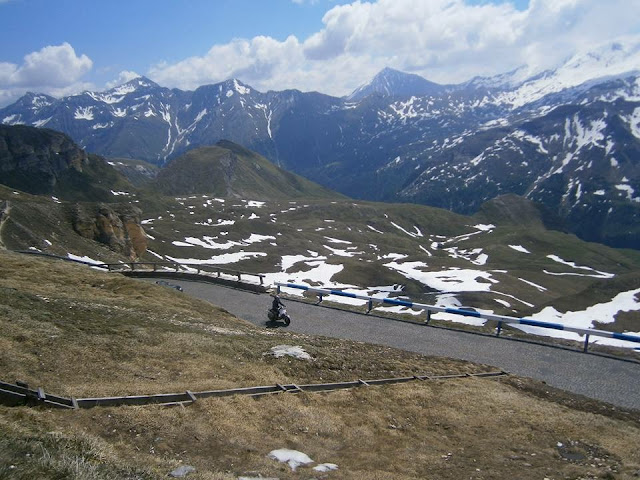 Yeah. I saw this picture of the Passo Stelvio in June and I shuddered. When I was riding the Dolomites a couple of years ago I got snowed on in July. Nice country! Not exactly tropical though. 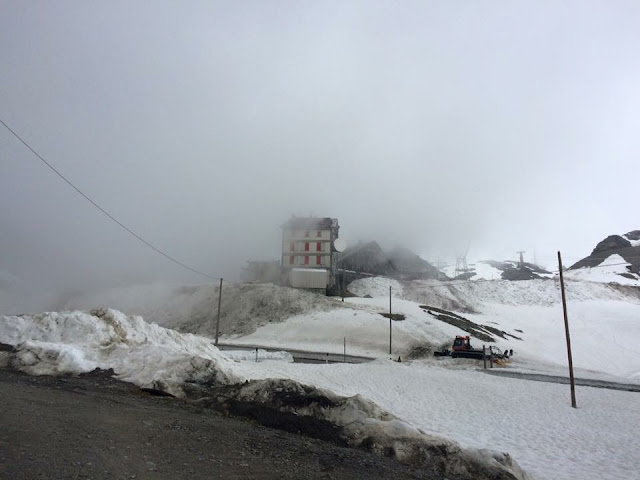 2005 meters in Old Money stands at 6600 feet, not a huge mountain pass by western US standards but high in Europe. And conquered by simple two stroke scooters: 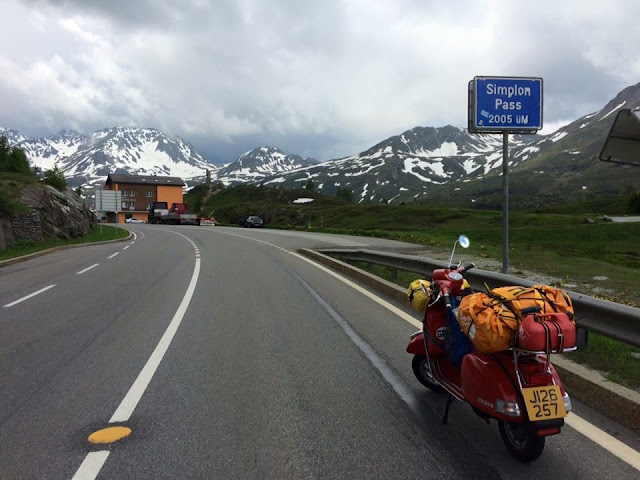 This scooter flying the flag of the Isle of Man, with no visible luggage, spent two days riding up and down the infamous Stelvio Pass whose hairpins can be seen in the background in both pictures. 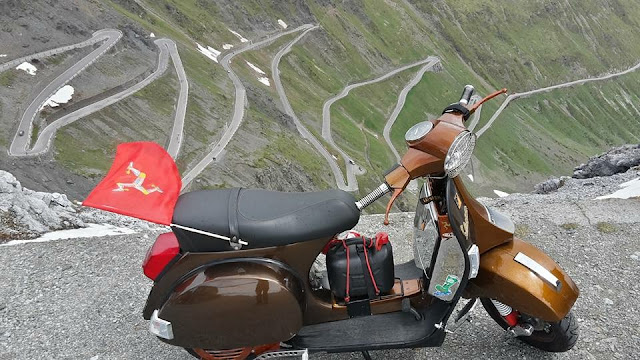 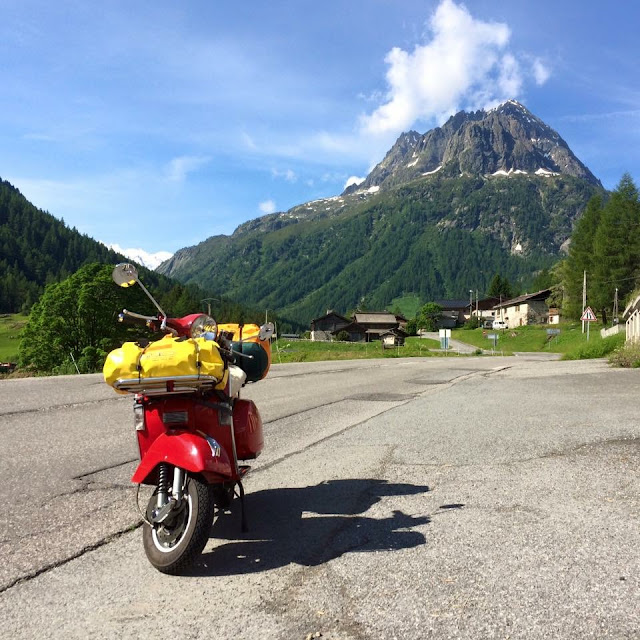 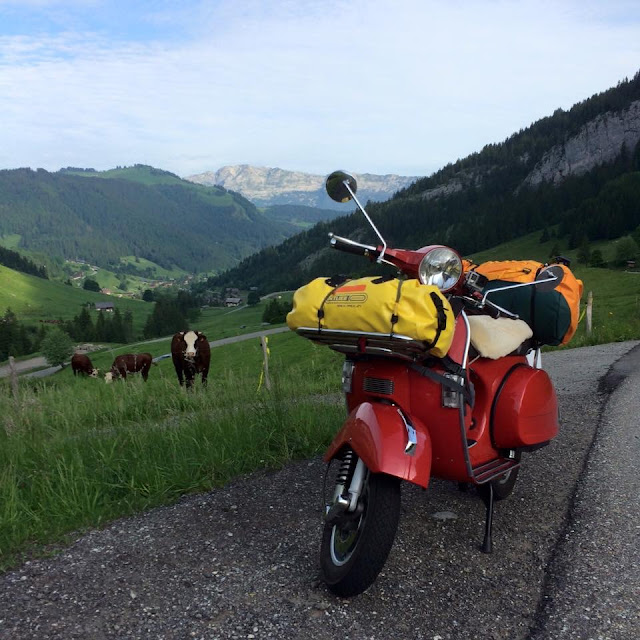 Some scooter riders skipped some of the mountains and rode down Italy to catch a ferry across the Adriatic. 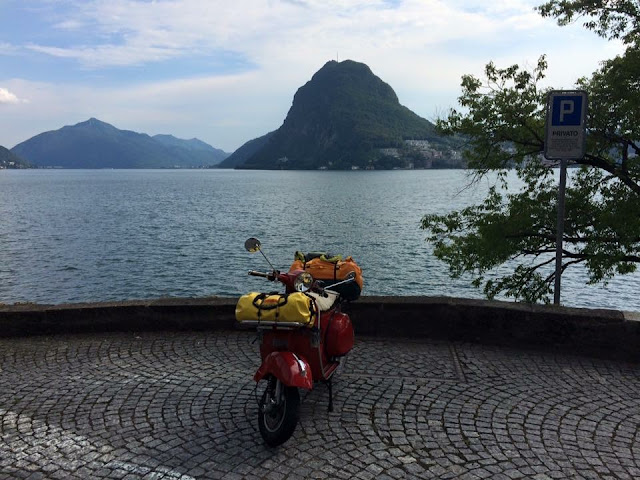 There are blurry pictures of night time fun at the rally, but my interest here is in the journey not the embarrassment of alcohol. Well earned though considering the effort to get there. And by the time you read this the scooters will be starting their treks home.

It's not always obvious from this side of the Atlantic but it turns out there is a substitute for cubic capacity! It's called riding what you've got, no excuses!
Posted by Conchscooter at 12:00 AM 3 comments: