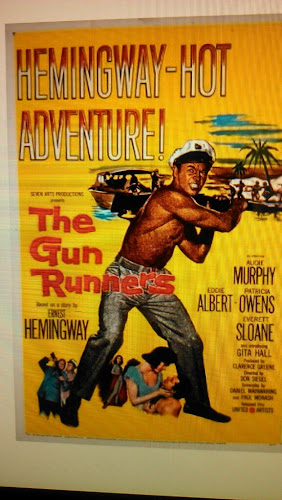 Happy Christmas! I prefer Festivus myself with the airing of grievances but anyway, now we are past the holly and the ivy thing lets get on to today's essay. I think a movie is the thing for the cold dark midwinter that hovers outside your door. Hemingway, gun running and Audie Murphy, perfect company on Netflix streaming for Christmas/Festivus. 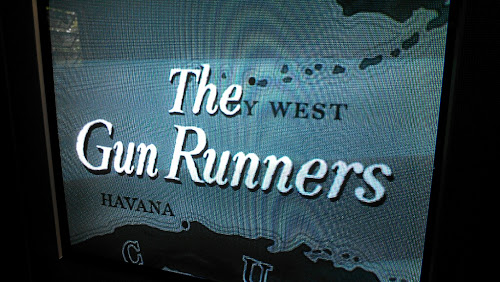 Howsoever that may be this is light entertainment not high art, so you can afford to not be completely attentive during the show. Better in fact you do not always pay close attention, as we shall see. 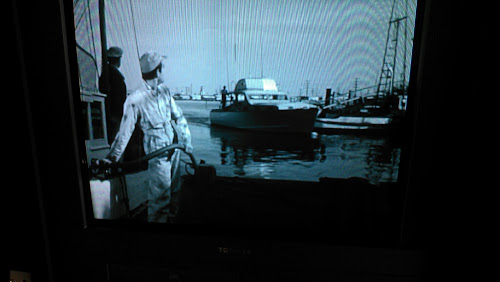 Hemingway's 1937 story has inspired lots of movie spin offs. Bogart met Bacall on the set of To Have And To Have Not, a movie made in 1944 patriotically set in Martinique a French island run by Nazi collaborators. Nowadays the star power of the movie makes it the most popular version of the original story. This one stars Audie Murphy the World War Two hero turned actor. 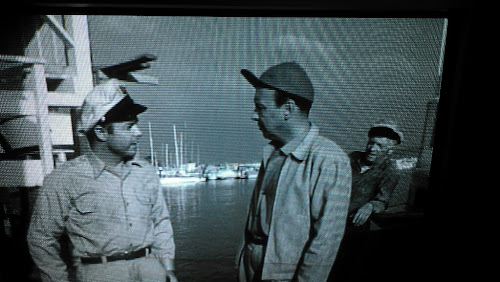 It most emphatically does not star Key West. The movie is mostly interiors and scenes at sea, which is your first clue the producers cheaped out. California is a versatile movie background, the Mojave desert for Afghanistan, Long Beach for Miami, Carmel for Cornwall and so on, but unfortunately because I know the state well I tend to get annoyed by movie makers' short cuts. This is not, nor ever was Key West: 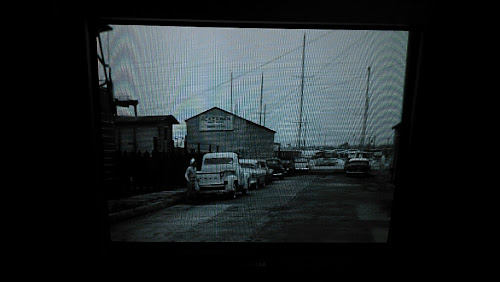 Photographing the TV screen is not easy or effective so bear with me, but anyone who has been to Key West knows there are no hills anywhere. Certainly not as an inadvertent background to the harbor. I think you can see the slope in this grainy close up, between the boat in the foreground and the white forms in the middle ground: 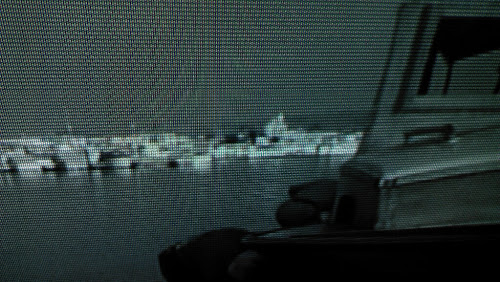 I suppose this could double as a Key West street, but it's a shame when they short change us. 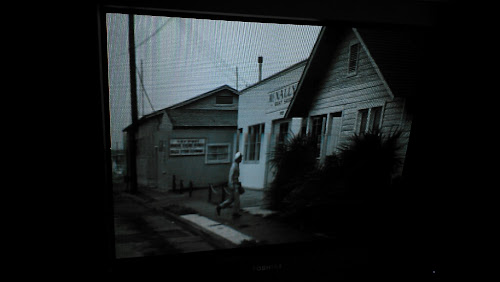 Don Siegel directs a solid cast of unknowns these days. Patricia Owens is Murphy's loving much younger wife and they sparkle together on the screen. 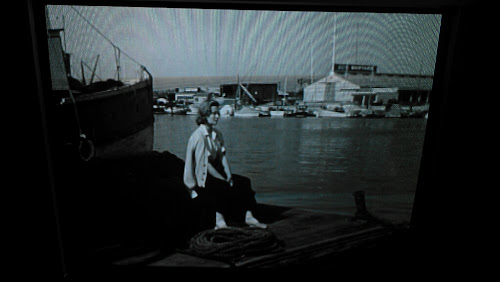 Everett Sloan plays Murphy's drunken deck hand, to much less comedic effect than Walter Brennan did in the Humphrey Bogart film ("Was you ever stung by a dead bee..?"). 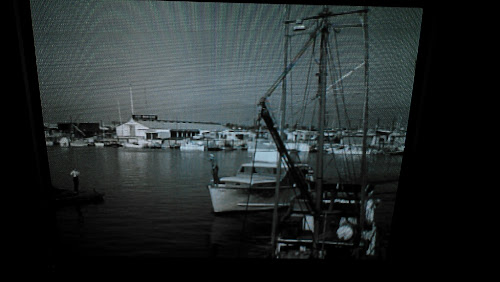 The happy couple, broke as one should be in Key West. After all eighty percent of the people were in the (first) Great Depression which was when the story was set by Hemingway. 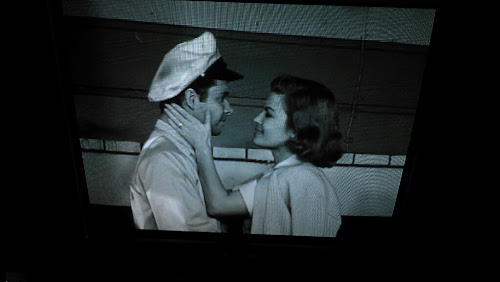 It's a cute movie, plenty of humor and in atmosphere close enough to the original story. 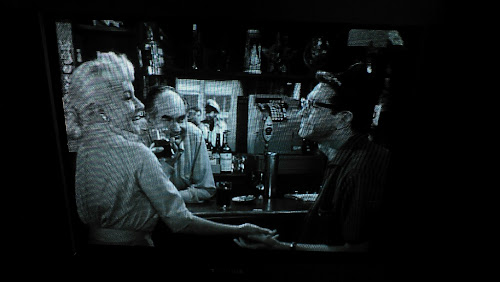 Oops, excuse me, there they go again. 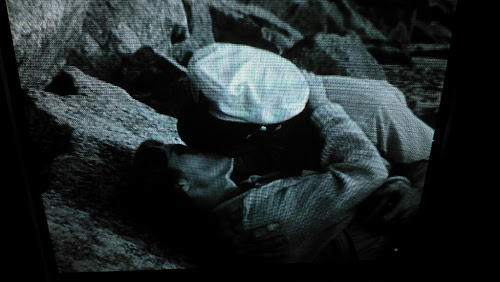 Until Gita Hall steps in and wants to tempt baby face Audie off the straight and narrow. 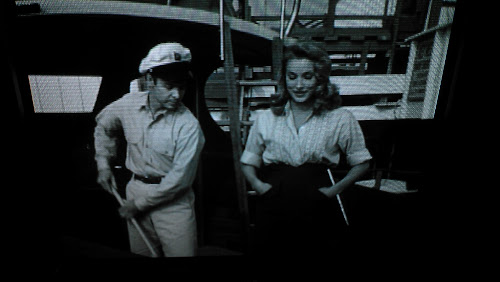 No one is what they seem...and strange blondes who offer you lunch, or something, are trouble. 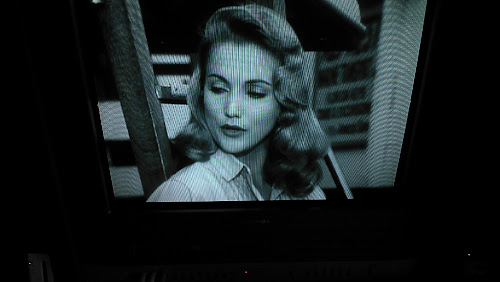 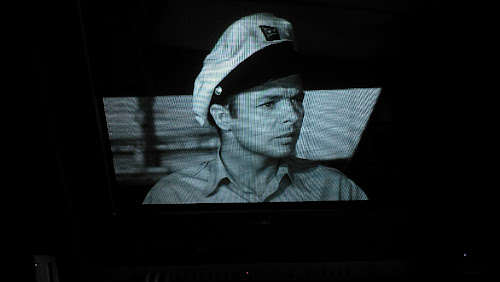 ...lacking authenticity a billboard will do. Am I a spoil sport? 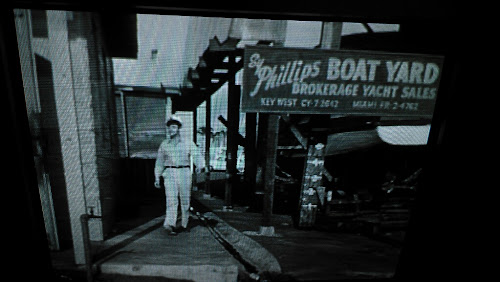 On the other hand this set doesn't do a bad job of recreating depression era Key West. 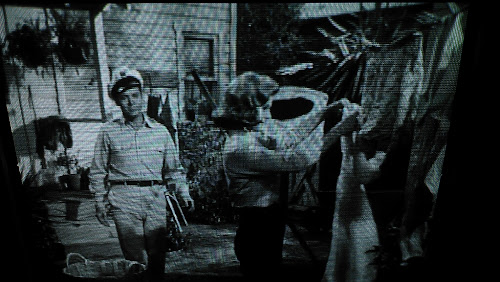 And slowly the plot unravels. 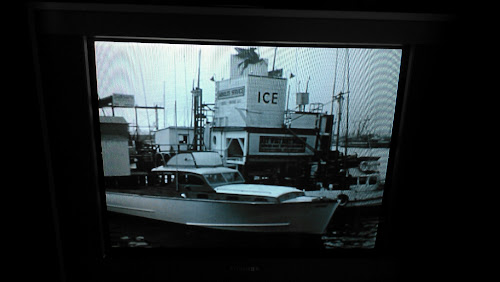 A movie of which you have never heard. My gift to you. Cancel your cable and save a bundle by subscribing to Netflix. Oh, and it's advertising free.