The party is over for another year and as the tourists stream out of the island (the peninsula actually) they leave behind a small local headache and a few too many people who can't hold their drink completely successfully. 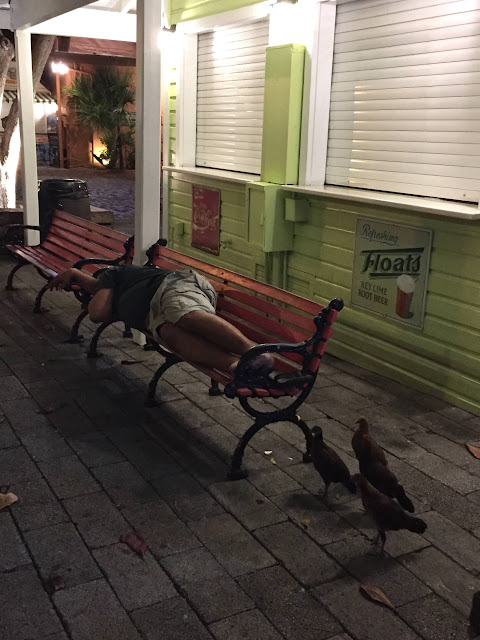 The money came, it changed hands, cabs weren't easily available for a couple of days and now we settle in for a few quiet weeks before heavy snows send pale, tan-free people south for "season." 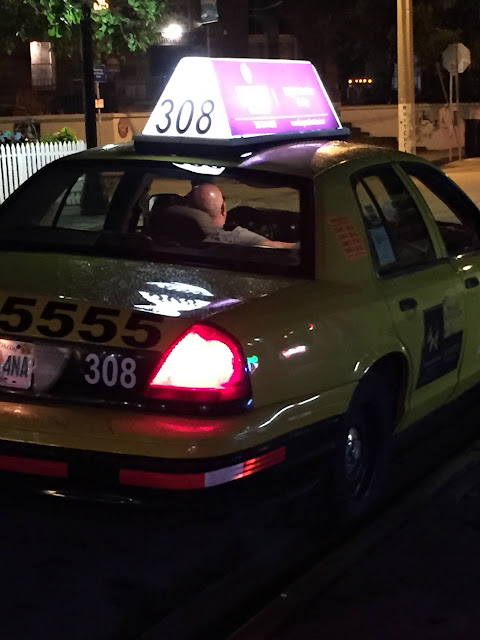 I like the empty streets, the predawn darkness, the shadows and light, the warmth of the night air which would seem like summer Up North. 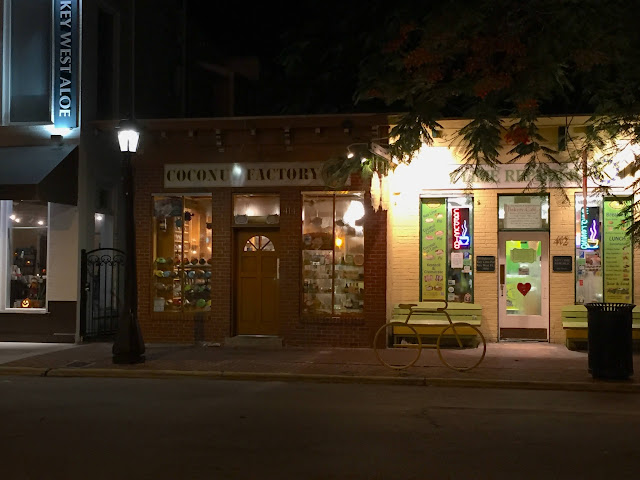 The body painting is done, respectability is back in style, except Key West really doesn't have a dress code in daily life. This is a town that lives in pursuit of transient cash no matter how you dress. So this is a town that revels in the money, in the goatish garishness of nudity for one whole week. Except for a few holier-than-thou protestors who somehow believe revulsion is a dish best served naked. I have heard comments about a woman, not unattractive, in a tiny thong cozying up to a bar, much to the horror of other, more respectable patrons who recoil at the woman's intimate touch with the seat. Bleach! They cry in terror of the microbes borne by her butt. Fair enough I suppose were the bar not the Chart Room. I've been there twice, once drunk on a pub crawl and once sober and I don't think I shall go back. The Chart Room is a tiny corner of a big mainstream resort at the end of Duval Street. It is a true dive bar and as such it's patrons go there to have a naughty little frisson while playing the daredevil. When I went there drunk I ate, God help me, free hot dogs popcorn and peanuts and perhaps the Dark and Stormies I used to wash them down neutralized the food that sat out in an environment which in my memory is more insalubrious that a neatly washed visitor's backside. People sit on those bar stools fully clothed that you wouldn't want sitting on your couch. Fantasy Fest does that, it brings out the disapproval pucker factor. 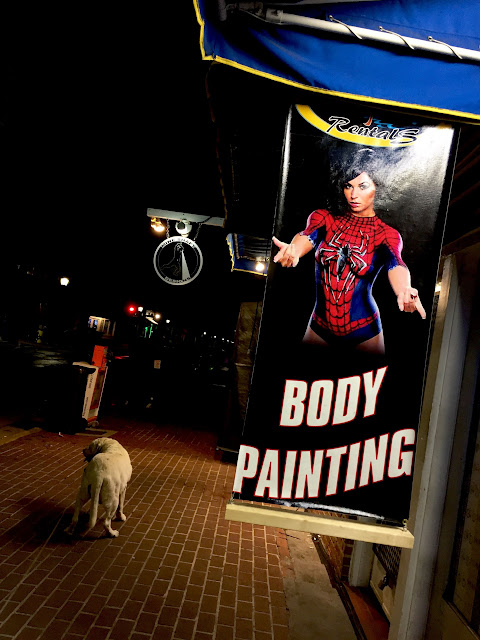 Clean up is a daily effort by the unsung heroes in the city's Community Services division. Cheyenne did her bit to help. 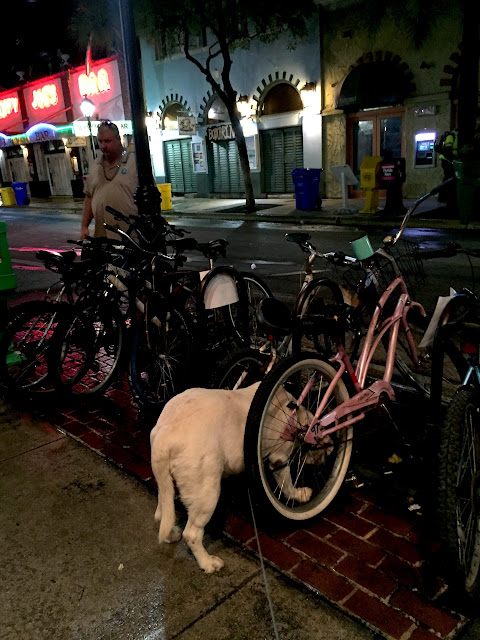 "Back in the day" is one of those phrases much over used and comes with a tin badge of honor alongside the orb of years served on the rock (”I remember in 1976...") and the scepter of memories of places mythical in memory (”...oh, too bad you don't remember the Copa Club...") with hints of delights lost in the mists of time. To hear it now Fantasy Fest was wittier and more clever and less driven by public nudity but the stories I have heard from those who were there tell another tale. We all know Key West is harder to live in and is pricing itself out of the market as a home to young free spirits. It has perforce to cater to the middle aged successful people who to get money have had to live a life of nose to the grindstone in places where I would shudder to live. They've eaten snow, social disapproval and repression. They've lived lives in places where non conformity is expressed by going under dressed to church, so when they get a week off at Halloween they don't stay home to trick or treat with their clothes on. Thus they come here, like the poseur loud "bikers" and the penis power boaters and the traffic jamming bicycle riders and every single group we can love to hate. Go away we say, we want Old Key West back. 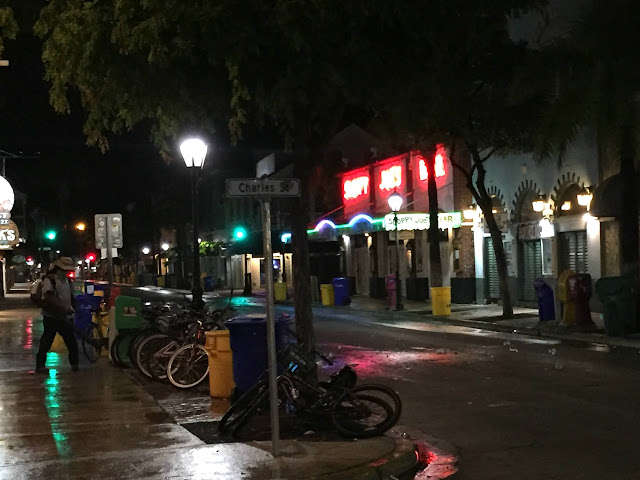 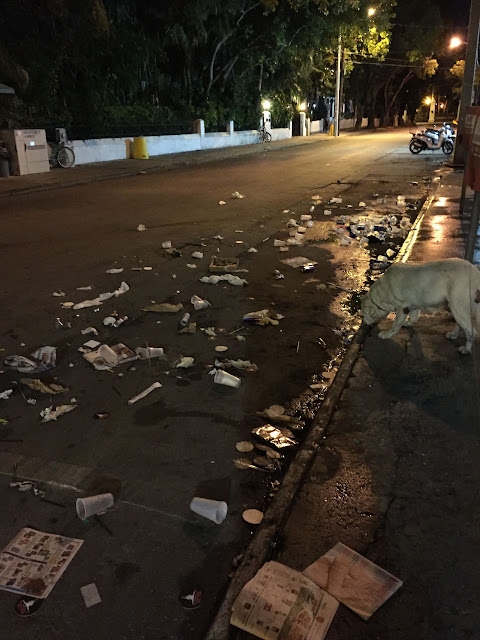 There is a vocal angry group of people born and raised in Key West who have fought loud and long to end Fantasy Fest as we know and hate it. You can appreciate their point of view, seeing their town turned into Sodom for a week each year. But these are the same people who couldn't make money from this town before the gay community flocked down to the Navy town going bankrupt (again) and made it a haven for queers. Let's not forget that in those dark days being "queer" was cause for death threats, beatings, ridicule, loss of work and total ostracism for a "lifestyle choice." In making their own fatal choice to vacate Old Town and use the gay money to build ranchette housing in New Town with car ports, proper air conditioning, wide streets, real yards and new schools, the Conchs ceded control of the jewel that was and largely still is, Old Town. The dreaded queers cleaned up the old buildings, created demand for art and modern cuisine, bars, recreation and freedom. Nowadays you can be "openly gay" most places in the U.S. and if you can't or won't afford Key West you aren't limited to the Castro or Provincetown to be yourself. But you are limited to Key West to be able to walk down the main drag as-good-as-nude with a drink in hand in late October, and not only will you not freeze your tits off but people will line up to take your picture. A Canadian friend of mine wrote to me in seeing my pictures on this page, to the effect that all those puritans need somewhere to blow off steam. Key West will happily take their money for a week of private parties which cater to all tastes and a public daily party that requires no taste at all. 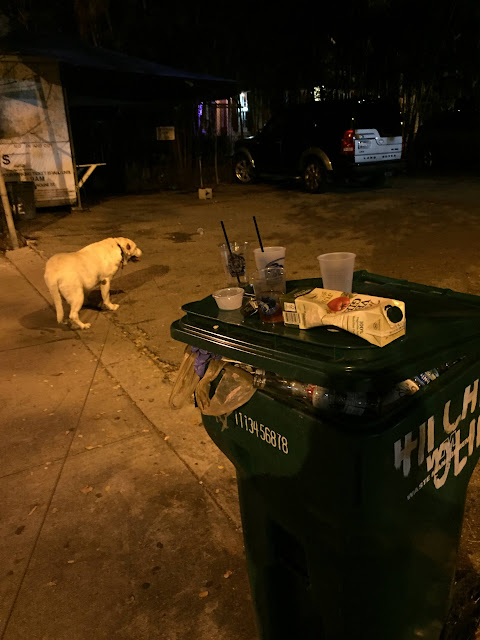 Relations between men and women in the U.S. are not as harmonious as they might be and as long as one major party has carte blanche to demonize women and sexuality it seems we are stuck in this mode for a while to come. In the same way that sex and violence are paired as equally disturbing sources of public art, so tits and cash are inextricably linked to Fantasy Fest. I'm sure I don't know what the childlike obsession with naked women's breasts is in this culture, but people will pay to see them. Men constantly call the police complaining that the "adult clubs" in town take their money but only let them look. To touch for money is illegal but to over charge for looking is entirely legal. To charge hundreds or thousands of dollars to stare at a Completely Naked East European woman sounds like worst business model ever but they do it in droves: they pay to stare. And somehow that is less creepy than people frolicking down Duval Street in their birthday suits. 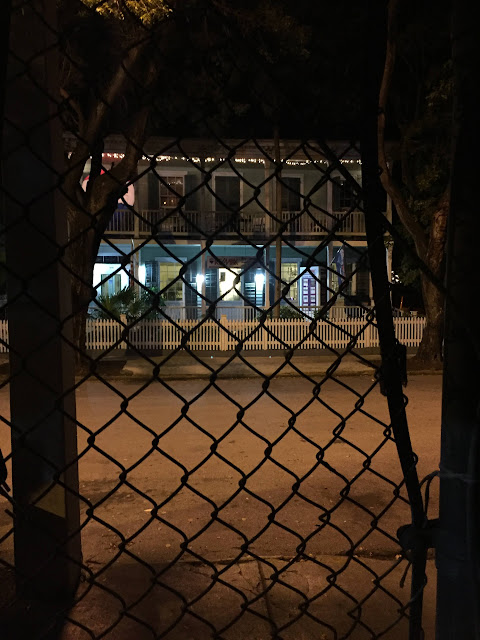 Fantasy Fest won't change anyone's problems and these days cash seems to flow into town in a continuos year round flood so the original reason for the festival "back in the day" is no longer as pressing. But money still talks louder than the protestations of Conchs who hate the degradation. For me, a human being congenitally driven to reject any form of dressing up, or fakery, Fantasy Fest is a chance to wonder as I wander. I always feel a little bad for the people driving away, their inhibitions at the wheel, their liberated dreams chained back up and tamped down for one more year. Perhaps they don't want to dress in tutus every damned day but in Key West if you wake up with a hankering to cross dress you can do just that and totter to the grocery store pretty much any day of the week. Perhaps just bring able to would be enough if they could dream of doing that at home. Instead they wait all year for this blessed week. 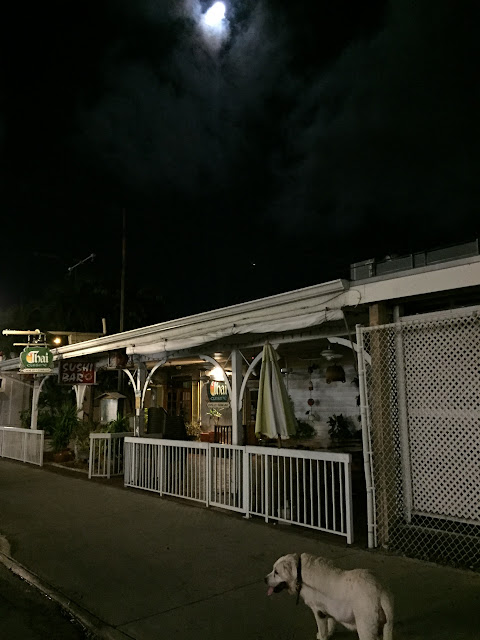 To me life at the end of the road has value because there is a level of public indifference, which translates to a form of tolerance for the off beat. Yes I know it was more pronounced "back in the day" but it was also more necessary. Besides which this is what we have, here, now, today. Fantasy Fest, as annoying as it is should be a reminder of that truth. Men can wear tutus, women can paint their breasts and nudity this time of year doesn't lead to frostbite. Which, even if like me you don't give a fig for public drunkeness or gross bad taste, all means something good, something subversive, is still alive and kicking in Key West.
(Cheyenne kept circling the raised bed and wouldn't let go. Sooo...in the spirit of mutual tolerance I lifted her up and she immediately rooted around for something abandoned in the pea rock. It sounded like it tasted good). 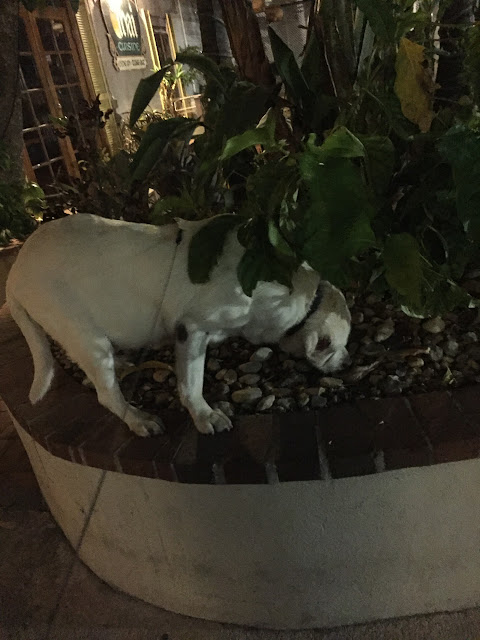 This is still a town that doesn't need bumper stickers telling us to keep Key West weird. It's organic even if cash driven. Not all naked bodies will inspire us to new heights of erotic fervor, but that should be okay too. If public nudity is to be reserved for the beautiful only the whole notion of weirdness is undermined. Then Fantasy Fest really does become Harry Bethel's worst nightmare, pure unadulterated public lasciviousness. And this year somehow we seemed to have had a less gross spectacle than the desperate public sexual frenzy of recent years. If this delicate balancing act can be preserved Key West can stay livable for those with money, tolerant of those lacking social skills, and an occasional relief valve for those who can't or don't live here but need to let it out occasionally while far from the respectable dull place they call home. 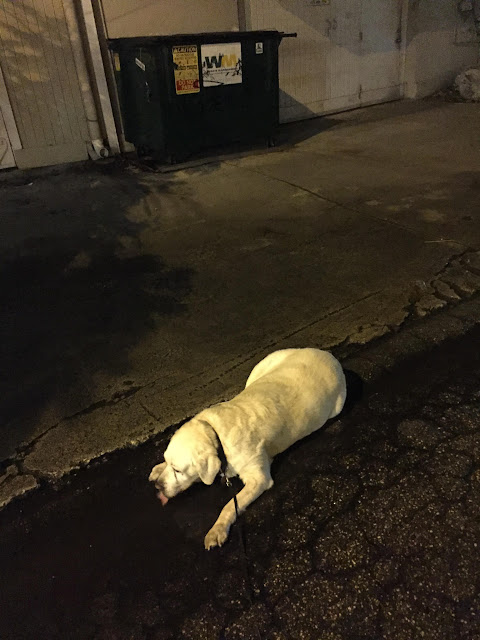 I'm glad we get a little quiet time now before snow drives snowbirds south for the winter.