Great good fortune came to some thanks to the city's decision to annex north Stock Island for the greater good of all concerned. The exact date of the annexation is nowhere to be found online but the Florida Keys Community College on College Road was founded in 1965 and the buildings opened in 1968. This was just after a 1964 referendum called to incorporate Stock Island as a city failed by 47 votes to 36. One has to assume that sometime thereafter Key West took over the northern part and agreed to put the community college there. 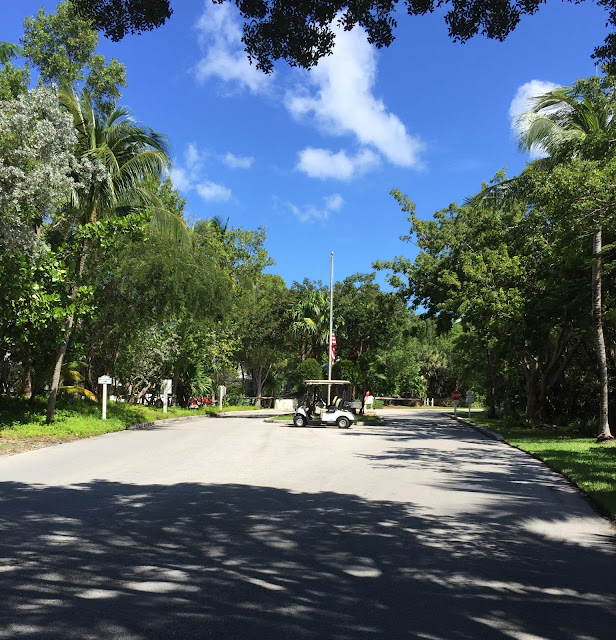 On the eastern end of the arc that is College Road on north Stock Island lies the gated residential community at the golf course. The entrance off College Road gives access to the golf club if you turn right immediately as you turn off College Road while straight ahead is the guard house which I photographed from inside the community (above). 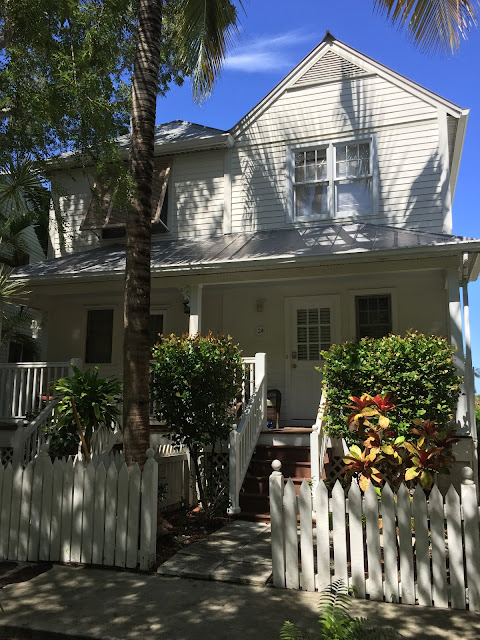 The golf course streets are built by the same developer who built Truman Annex, the other gated community in Key West and the similarities are obvious. There are community rules apparently and one friend of mine who lives in here says even here there can be disputes over parking spaces. 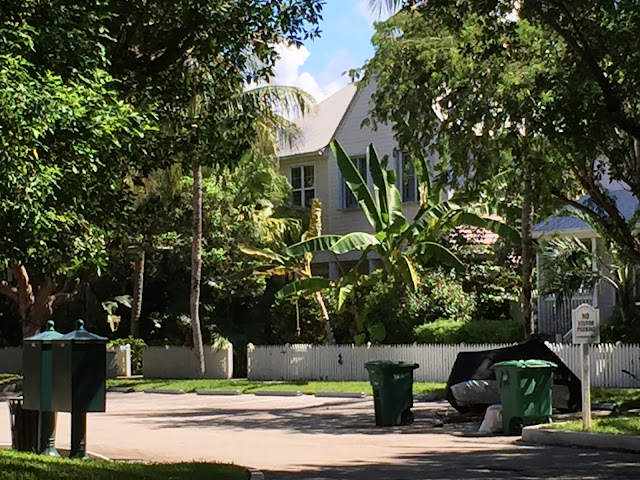 The advantages of life here includes easy access to golf if that is of interest, there are no bums and no outsiders as the gate is guarded all day and all night. To get in to visit a friend I had to give her name, her address and have my license plate photographed. It's the kind of peace and quiet you won't find in Old Town Key West, which is one bridge and 15 minutes away depending on traffic. 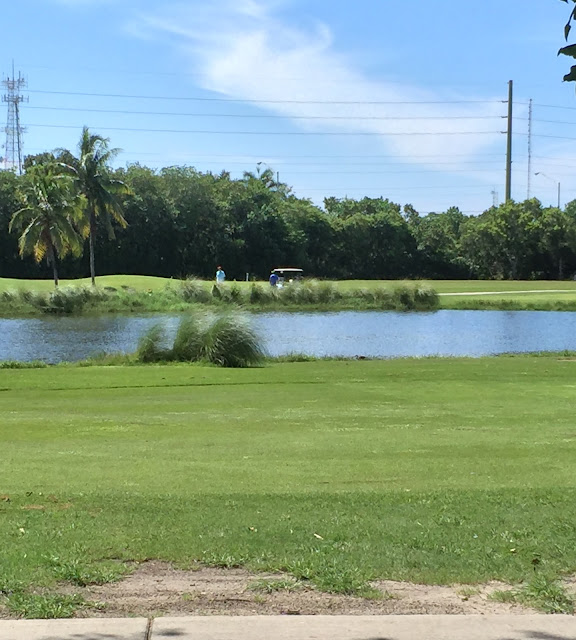 Golf courses raise their own environmental issues with use of water pesticides and all that. On the other hand in a bunch of islands where grass is as rare as hair on a bald man's head the neatly trimmed links makes for a pleasant view: 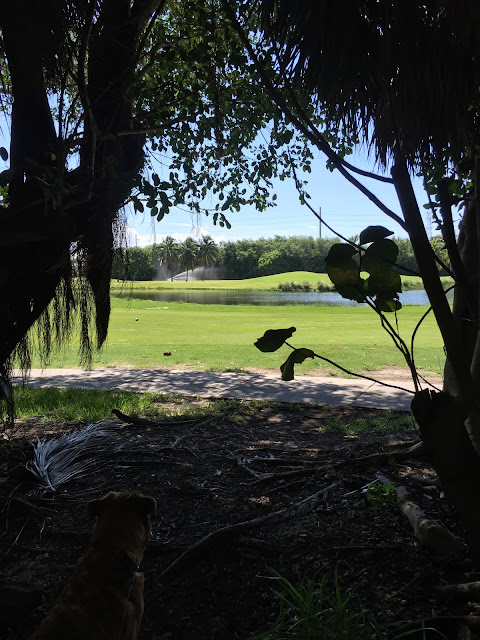 And the trees in the distance are a thick sound barrier to Highway One traffic just beyond them. 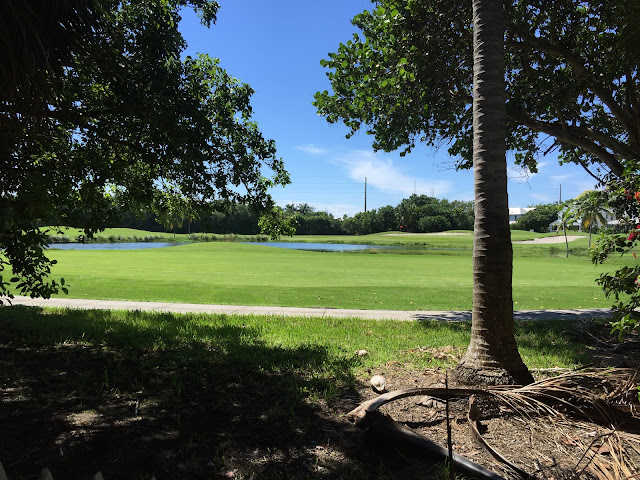 On the other hand you are living in a  tightly regulated, neat community which is not always appreciated by the more anarchic elements still left living in odd corners of Key West, the gentrification city. Humor is present too, though: 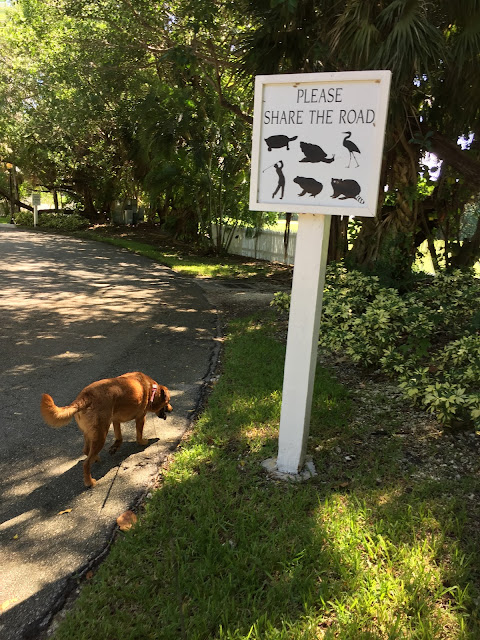 The homes themselves are mostly attached town homes though I am told there are a few free standing units. Prices are around half a million dollars, more or less and interior space is restricted. By mainland standards these are decidedly not McMansions. 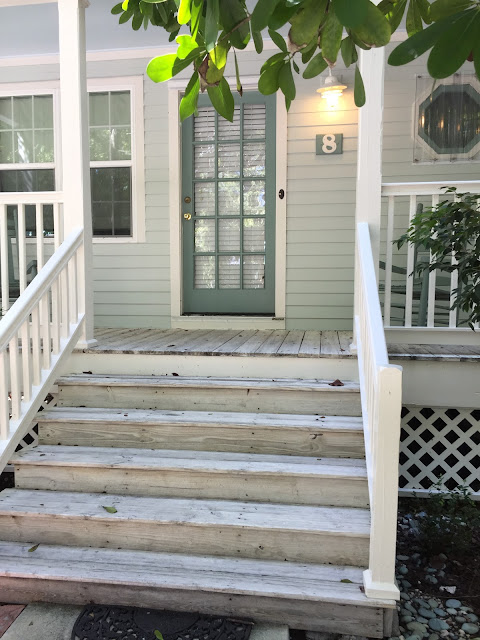 By Key West standards however they are extremely functional.  They offer all modern conveniences  including modest yards, parking, weatherproof construction and central air. Nothing to boast about in modern North America but in Key West where roofs don't always align with walls and windows often don't close properly this is first rate living. As long as you can cope with being a car drive away from easy drinking in Old Town while always being overseen in your habits by the community rules... 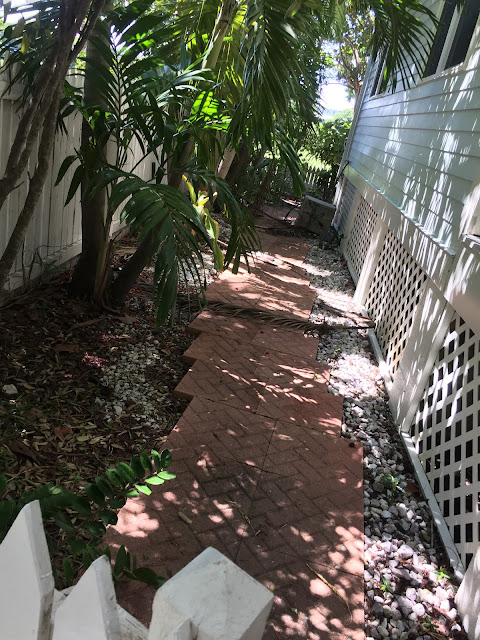 It's either a Norman Rockwell or a Stepford Wives picket fence community: 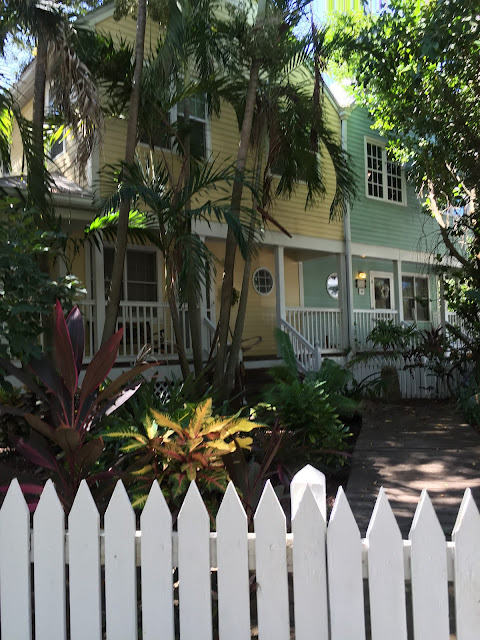 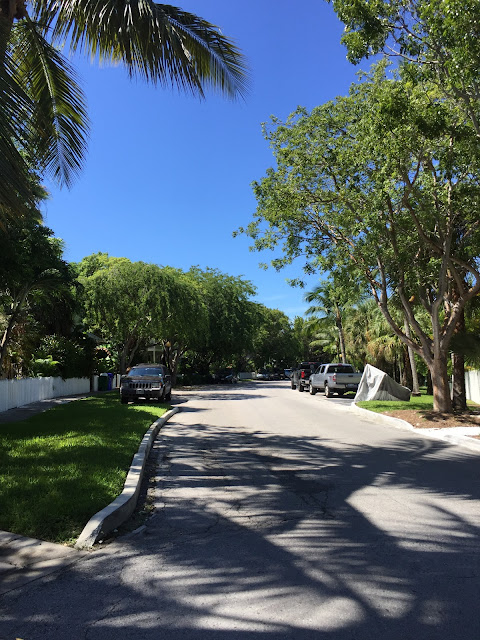 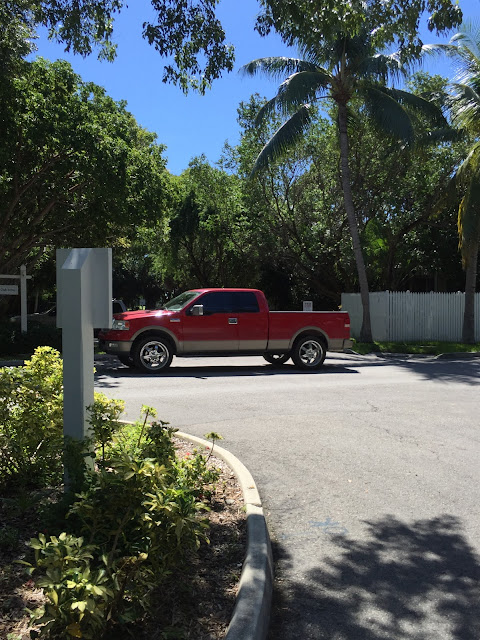 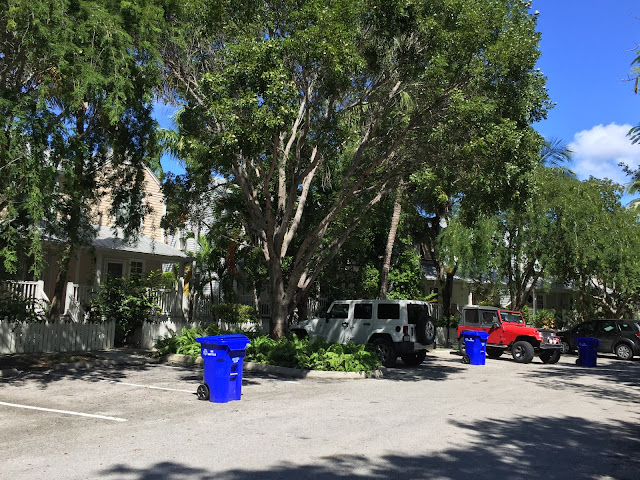 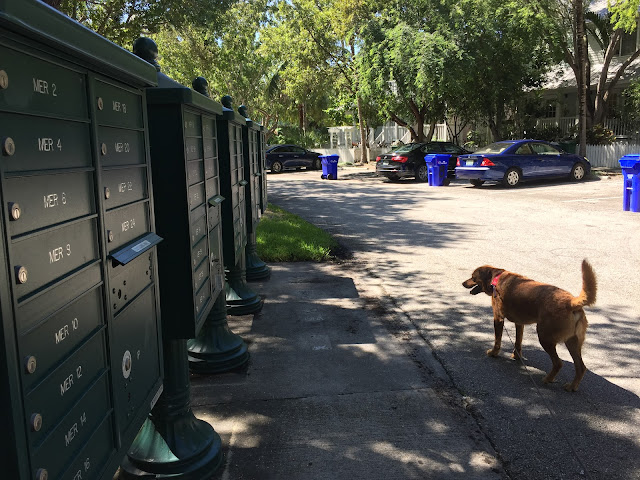 Spaces are small, typical of Key West, but they lack for nothing and especially for a person or couple who plan to travel away regularly the security and ease of use is a giant plus. 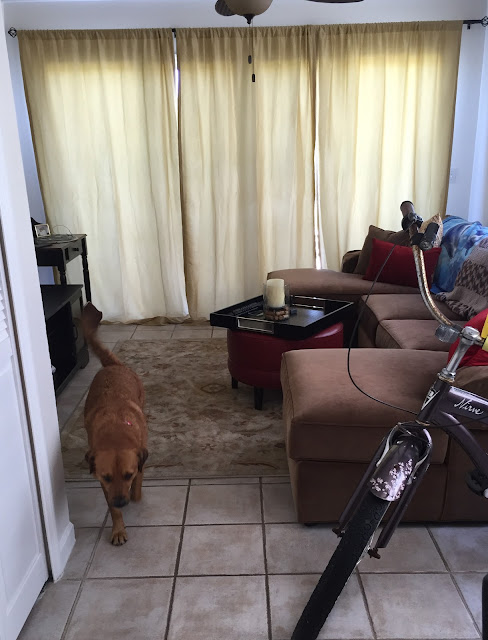 So there's another way to have a Key West address that is actually in the city... 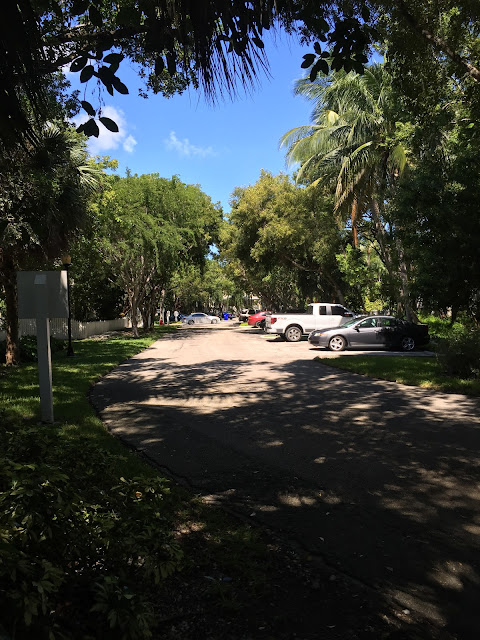 The Golf Course is hardly noticeable on the north side of US One as you drive east across Stock Island. The cyclist was in Monroe County where I took this picture on the south side of the highway., while the trees are in Key West: 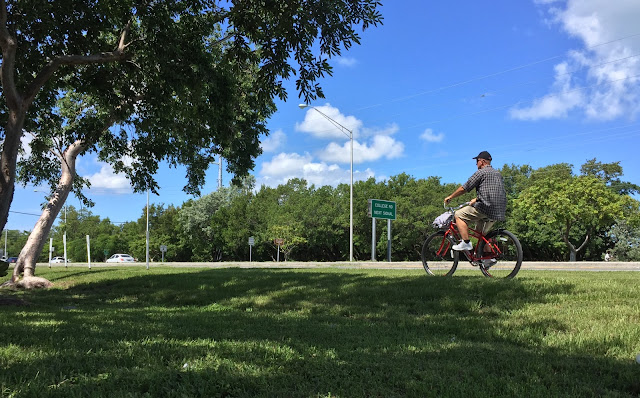