I went to see All Is Lost earlier this week at the Tropic Cinema and I went with a mixture of trepidation and curiosity. I'd seen the trailer a few times and I was curious to see if he survives his sailboat sinking under him - the trailer suggests not. I was also curious to see how well a sailing movie would depict the dark art of crossing water under sail. There was also some trepidation because a) I wasn't sure the movie could hold my interest and b) if it was any good would I get flashbacks to when I had my own problems at sea? Judging by early reviews in the respected West Coast Sailing Magazine Latitude 38 the movie sucks: 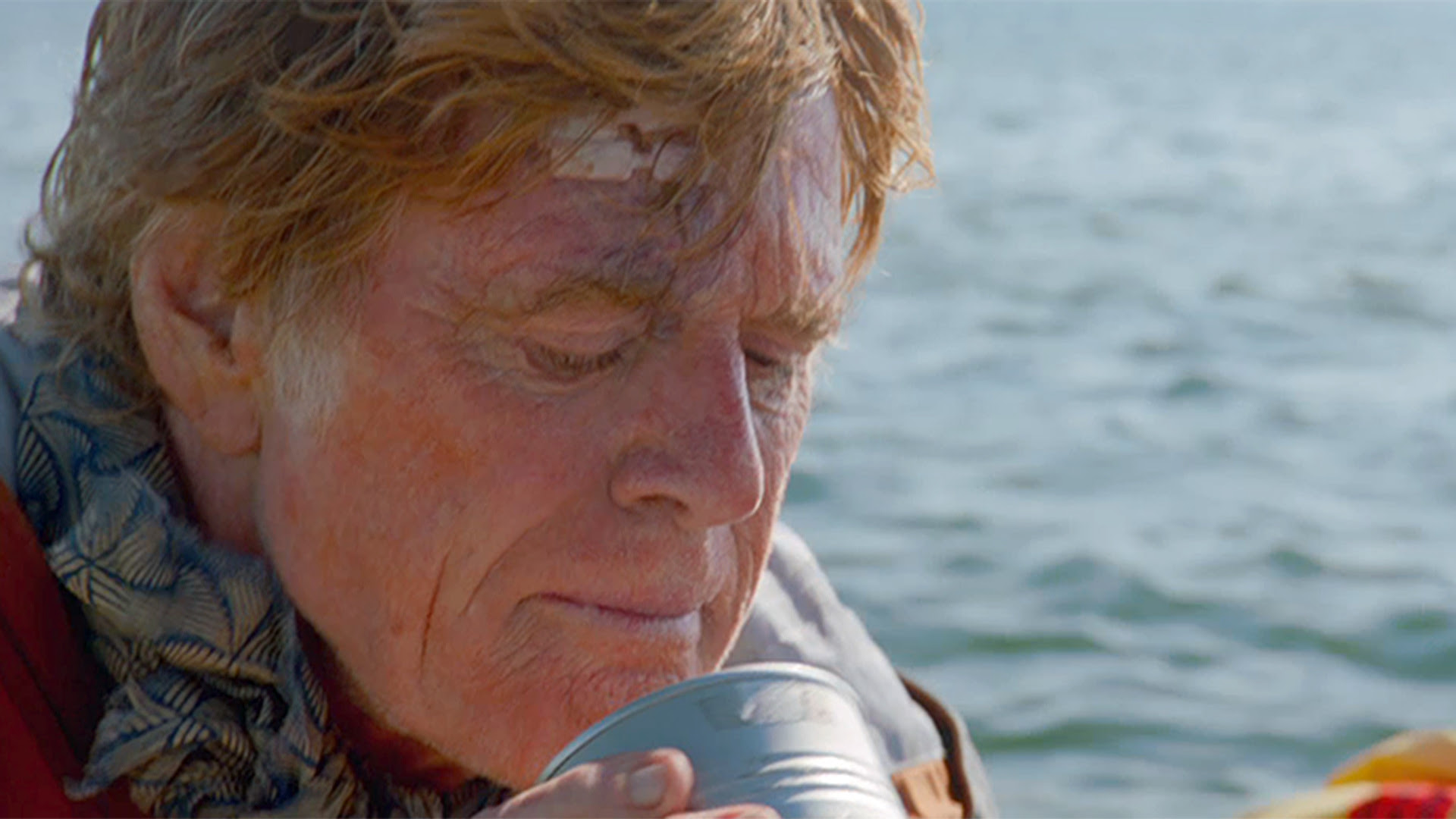 From this website http://www.latitude38.com/lectronic/LectronicLat.lasso we get this review:
November 4, 2013 – Movie Theaters Everywhere

Well, shucks. Hollywood has the chance to really represent sailing accurately — relatively speaking, of course — and it appears they dropped the ball . . . yet again. The debacle that was The Perfect Storm or even the ridiculous 'rescue' scene in Dead Calm were painful enough but now we have another epic fail to add to the list. We have yet to watch the film for ourselves, but reports from sailors are flooding in about Robert Redford's 'tour de force' performance in All is Lost and the reviews aren't favorable.

The one-man show that boast a grand total of approximately three words follows the harrowing trials of a sailor whose boat sinks out from under him in the Indian Ocean. The trailers looked exciting and passably accurate but we're told the rest of the film is a disappointment. "From the moment his boat gets rammed by the free-floating container to the last scene where he decides it would be a good idea to start a bonfire in his WWII-vintage rubber liferaft to create a signal fire," writes Corte Madera's Linda Muñoz, "anyone who has ever gone on a Bay cruise on pretty much any type of vessel would agree that you don't want to go sailing with this guy. He's only adrift for eight days and barely has any food, almost no water, no PFD or lifesaving suit, no GPS or radio, and no flare gun. Redford does his best but unfortunately, the massive number of inaccuracies and unbelievable situations ruins the movie for anyone who has sailed." 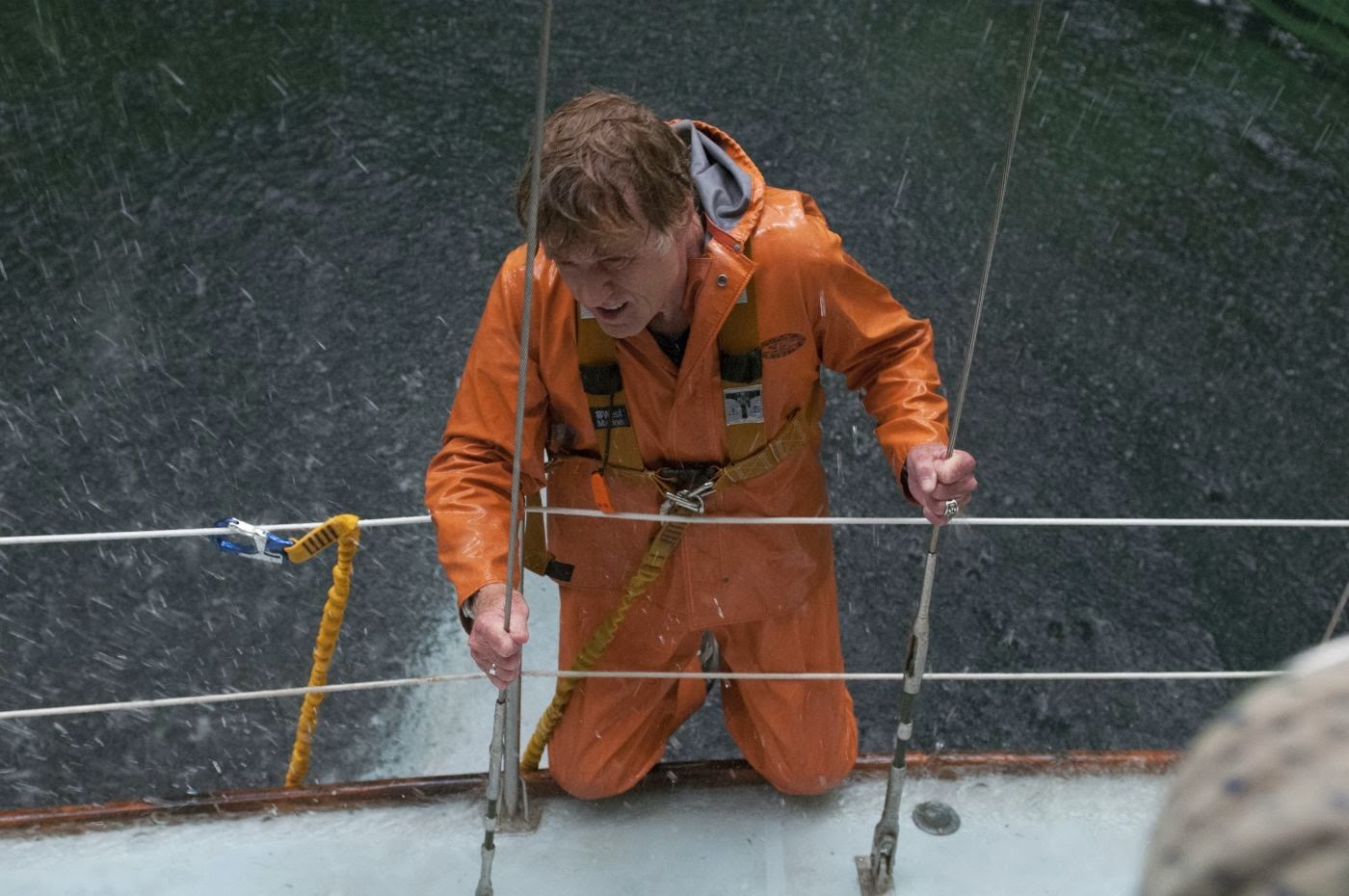 Hugo Landecker, who sails his Westsail 32 Alexander out of San Rafael, agrees with Linda. "There were so many mistakes in this film but I didn't have a pencil and paper to record the countless errors. He made navigating with a sextant look so easy! Just wave it at the horizon and voila! You have a plot fix on the chart! There were so many inaccuracies that this serious 'thriller' turned into a comedy for me. My poor wife's arm was bruised by the time the movie was over for all the times I nudged her when there was a mistake. I'm sure non-boaters would enjoy the drama, but after seeing this film, they'll never get on anything resembling a watercraft."

We'd been looking forward to seeing All is Lost on the big screen but after hearing these dismal reviews, we'll just add it to our Netflix queue and pop Captain Ron into the DVD player. It may not be that much more accurate but at least it was meant to make us laugh

I am very fond of Latitude 38, the best boating magazine anywhere, and when I used to live aboard and sail Northern California, Latitude 38 was the monthly required read. This was before the advent of the Internet yet even in this electronic era the free monthly paper magazine seems to be flourishing. Having said that, I must respectfully disagree with the sailors' comments above. I lived aboard and sailed for a decade, and I in fact sailed to Key West from San Francisco at the turn of the century taking nearly two years to sail to Panama and up the Caribbean side. That was where I met my own couple of storms whose memory this movie so powerfully evoked. 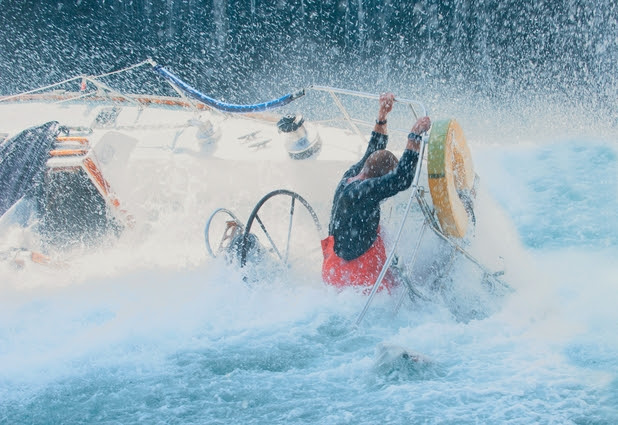 Personally I was astonished by the power and effectiveness of this film and it was in my opinion the best I have ever seen about the sailing life. Let's not forget it is a movie and film makers have to make artistic compromises one way and another so to expect absolute authenticity is unrealistic and, excuse me, a little bit stupid or naïve. Frankly I think sailors are showing off if they want to nit pick publicly about the movie's sailing shortcomings. Robert Redford's unnamed sailor hits a floating container in the middle of the Indian Ocean in a flat calm and he methodically sets about fixing the hole in his boat's hull and trying to repair his radio. The sailor is as calm as the ocean he is floating on but, like the biblical Job, one thing after another goes wrong. It's often said among sailors that one failure will lead to the next and this sailor has clearly pissed off all the gods within range because he gets no breaks. Silently and efficiently he responds to everything that goes wrong with a measured and planned response. It is a mesmerizing performance especially as there are but three pieces of dialogue throughout the almost two hour movie. First, as a voice over, he reads his goodbye letter to his family ending with the haunting phrase "all is lost" and then in flashback the whole nightmarish eight days unravel. During that part of the movie the sailor tries calling on the radio till it dies definitively and the final moment of dialogue comes when he screams a long drawn out curse as he discovers his fresh water supply is tainted with seawater. That's all the dialogue there is and yet the movie is totally absorbing, riveting and the pace never flags.

If you are a sailor and go into this movie looking for nits to pick you will find them. I got completely lost in the story and I had no time to see any of them. I loved how the sailor's boat and equipment was worn and actually looked used. He was a perfectly middle class average sailor just like any of us and suddenly "all is lost." I thought it was a fabulously absorbing drama all the way through. I guess there are a lot of sailors in Key West, or perhaps Robert Redford still has magnetic movie star powers because the theater was almost full when I went to see the film. I'm very glad I did as I cannot get the story out of my head. You should go too whether or not you know how to sail. This film will reward you and put you off sailing!

Posted with Blogsy
Posted by Conchscooter at 12:01 PM 4 comments:

Let It Snow In Key West

Winter has beset Key West, the first real cold front of winter is upon us. Nighttime temperatures almost hit sixty degrees and daytime highs yesterday barely reached seventy. Quite a few people were wearing long pants and jackets around town during my afternoon lunch break from work. 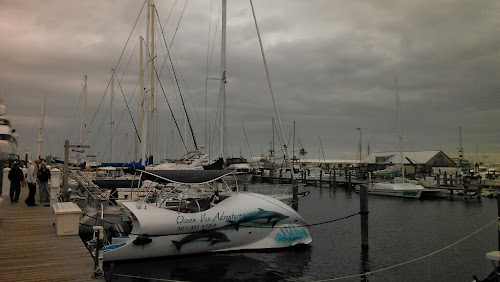 Thanksgiving had its own neutralizing effect on the city. Sandy's 24 hour Cuban cafe was closed though Andrea snuck down there before the three pm closing time and brought reviving con leches to the communications center. The rolled down white door is a sight rarely seen on White Street. 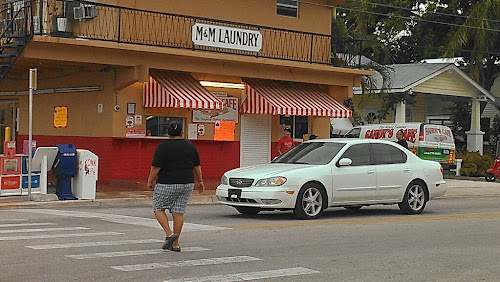 It was generally a gray day yesterday, reminiscent of California's summer time marine inversion when cold sea air mixes with warm desert air and the day disappears behind a gray wooly blanket. Colors were muted, an unnatural condition in Key West. It wasn't actually snowing but it felt like it should have been. 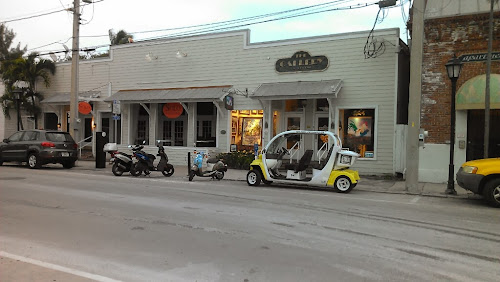 People from Up North take great pleasure in mocking us for our inability to cope with temperatures below seventy degrees. All I can tell you is anyone who has felt cool temperatures in Key West will tell you they have never before felt so cold and damp at that temperature, whatever it may be. 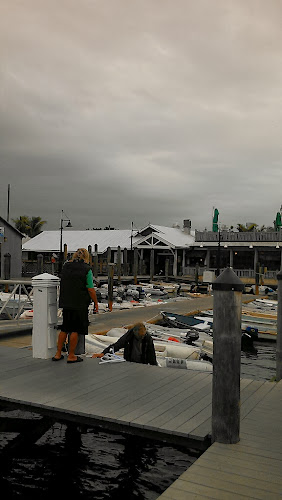 The lowest temperature recorded in Key West was 41 degrees and I have seen 42 official degrees in town and it seemed frigid. Snow has been seen, feeble enough and momentary in Miami. But frost has never been seen in Key West. Winter temperatures in Northern Florida can dip to freezing, but down here never. 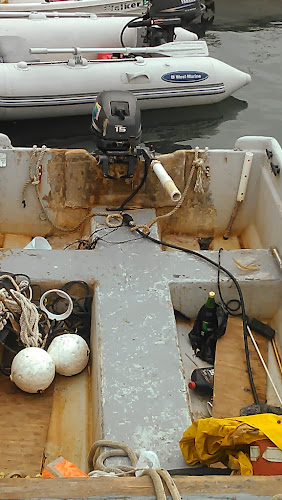 And just as well as the city is poorly equipped to cope with cold. Few homes have heat, fewer residents have much in the way of warm clothing, as I shall show when a strong cold front hits and weird pathetic scarecrows take to the outdoors in whatever woolen scraps they may have. Life on a boat can be frigid lacking proper equipment. 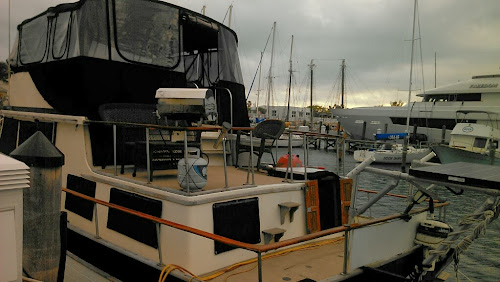 I take pleasure in the first drops in temperature that break the cloying heat of summer. Yet I soon tire of the cold. 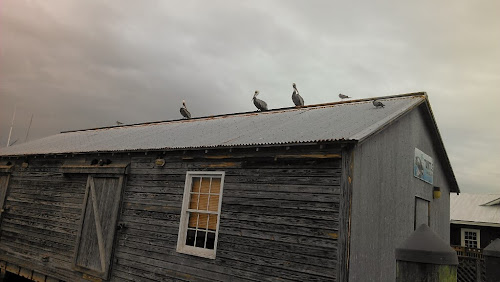 I was astonished by the large crowds lined up for a "sunset" cruise on such an overcast blusterous day as was yesterday. On the water, the chill is even colder. I wonder if the tourists were aware of that? 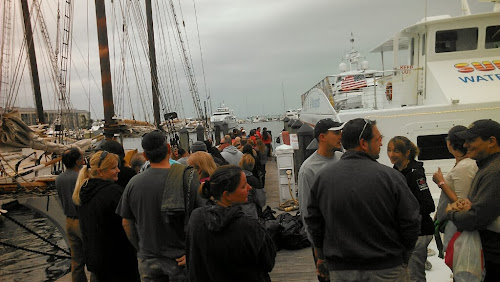 Waterfront dining at Conch Republic Seafood is usually an open air affair, but when needed they can close off diners from the cold. 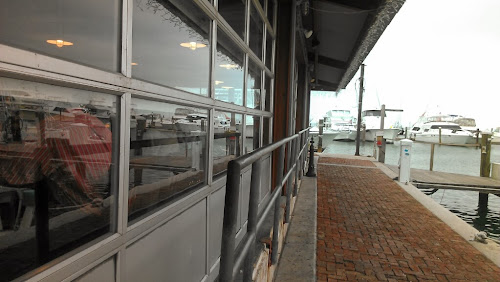 I expect the sunset cruisers were having fun out there. They probably saw an iceberg or two. 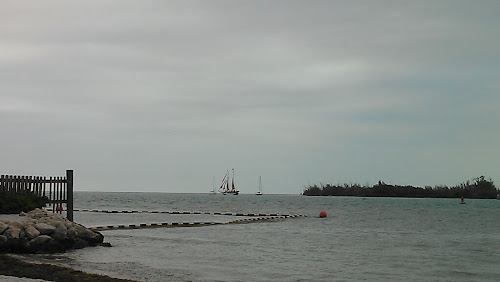 You might be forgiven for thinking that Kermit's Key Lime place on Elizabeth Street had snow shutters, but it was just styrofoam ably camouflaged. 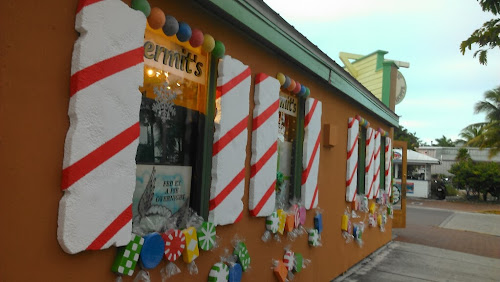 What an odd sentiment to use for advertising I thought as I strolled by. I expect it works as I know nothing of business. 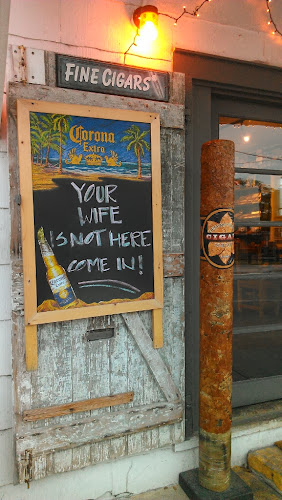 Every time I walk downtown and I see cruise ships towering over our little town I wonder how our leaders could imagine that vessels even larger admitted to our docks could benefit this modest island. 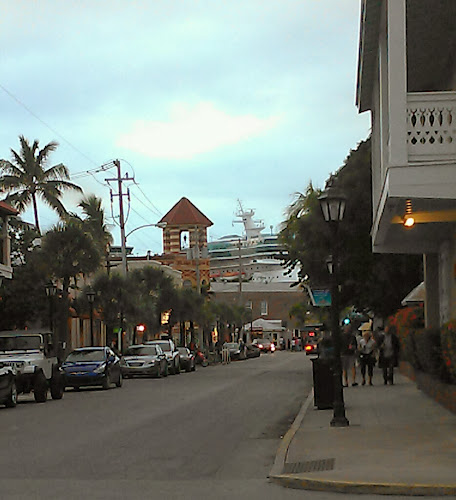 And now Thanksgiving is past and so it is on to the next holiday, Hanukkah for my wife and her people, Kwanzaa for African Americans, Christmas for Christians, and shopping wildly for everyone else. 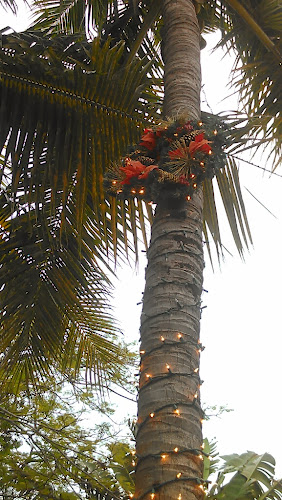 For me, lacking as I do any belief in anything I cannot see or touch, I now face the long dark winter lived Up North, thrusting people down here to find sunshine, a fact that needs no belief, and I am not even a shopper. Soon I shall start to look forward to summer's heat and peace and quiet, even though tomorrow it should be close to 80 degrees, sunny and properly pleasant once again. Cold and gray is all very well, but the sooner the sun returns the better. Enjoy your seasons Up North.