I was in the Key West Art and History Museum at the Old Custom House on Clinton Square and I determined that I wanted to enjoy certain pieces of art. For instance "The Old Neighborhood" below: 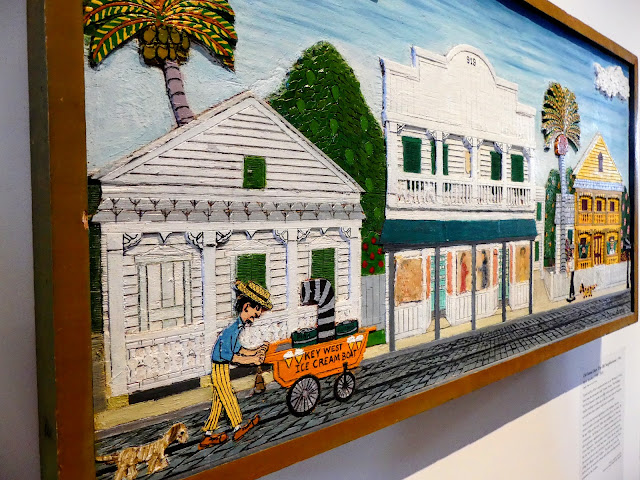 Sanchez  was self taught, drawing his pictures on brown paper bags and translating them into wood carvings. Pretty amazing: 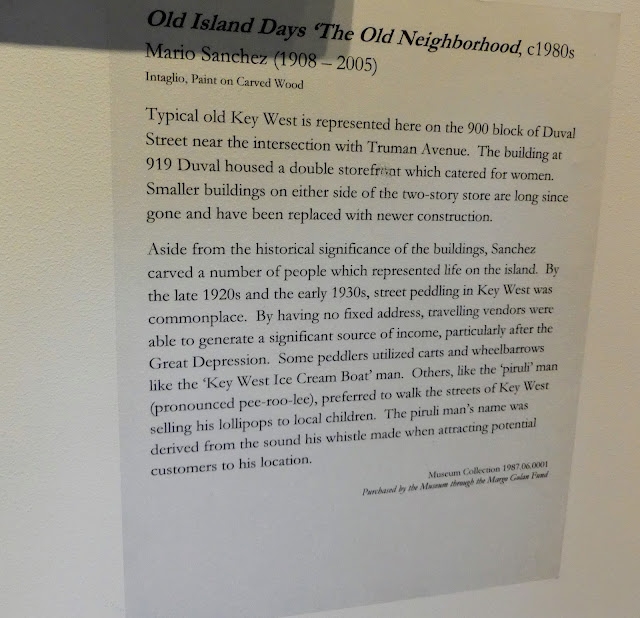 As  you check out my rather angled photographs (it's not easy to adapt to the lighting and stream of cruise ship passengers!) you'll notice that Sanchez's "photographic memory" includes no street chickens. I was also checking out the Works Progress Administration watercolors from the 1930s and they too show no wandering chickens on the streets of Key West. Promoters of the fowl say they are a tradition. Not that I can see... 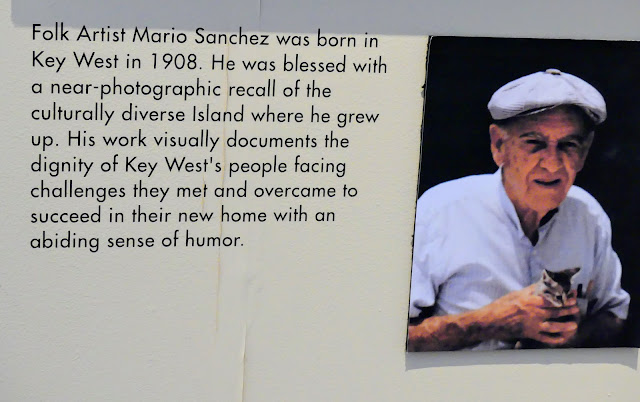 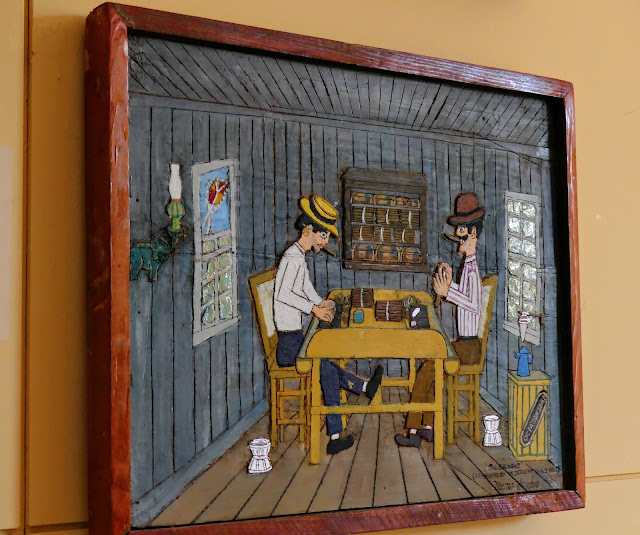 Below you can see the reader keeping the makers of  cigars amused as they roll their leaves. Cigar making was a big deal in key West after socialist revolutionaries from Cuba failed to oust the Spanish and got ousted themselves. They came over in exile and got to work making cigars. However Key West's peculiar problems reasserted themselves  even in those days  and  the bosses found cheaper land in Tampa where they created Ybor City and made that the cigar capital of Florida. 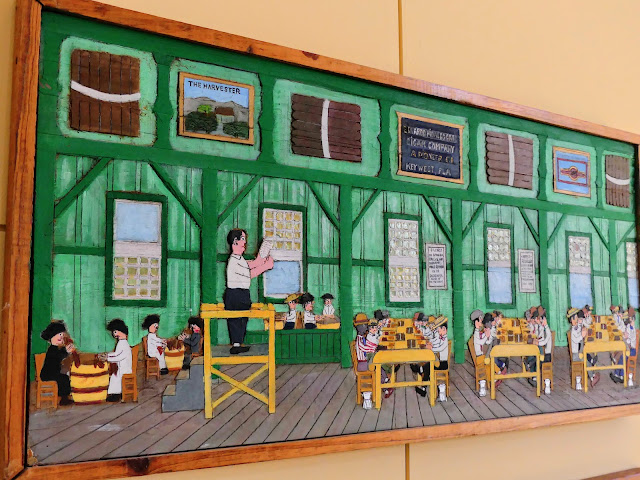 Hot bollos are Cuban falafels if I can be so crude. Essentially they are spiced ground black beans deep fried and utterly delicious. Five Brothers make a good version but in Sanchez's art they were for sale on the streets. Happy days! 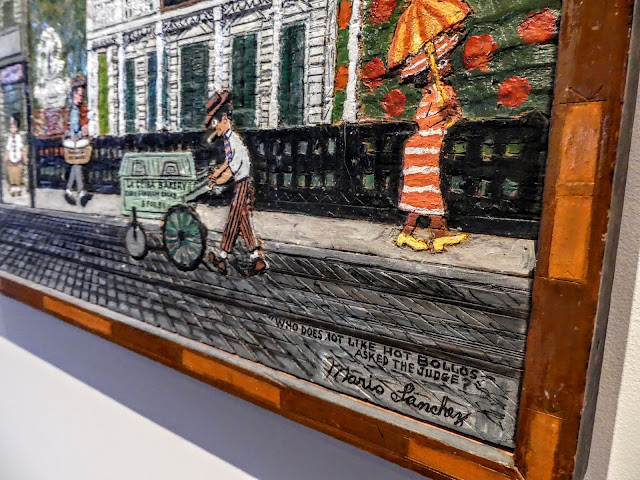 In the picture above you can see the street car rails for the horse drawn carriages. 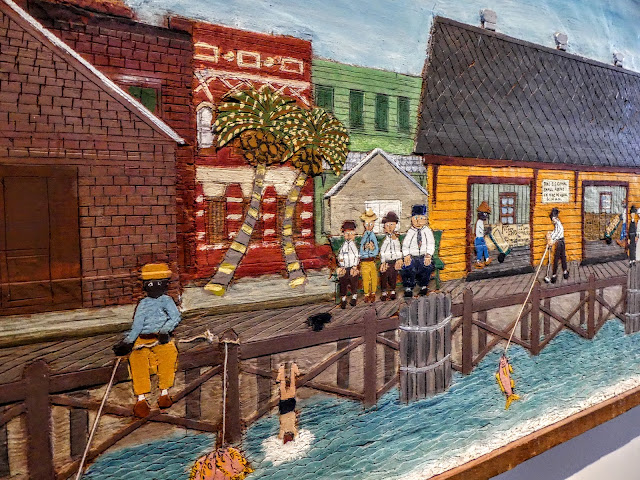 Sanchez also turned his hand in his outdoor studio to creating fish of which I photographed just one. Grunts were  a precious food during the Depression when they were  a staple in the impoverished city. 80% of Key West's workers were on Federal assistance at the time and the city went bankrupt. People ate grunts and grits and were happy to get them. 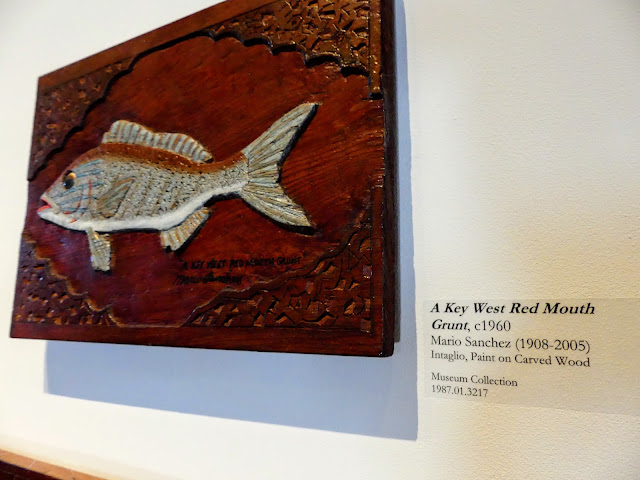 Key West changed quite a bit to accommodate the railroad in 1912 by building up the north shore where the train arrived and unload people while rolling freight cars into ferries bound for Havana. Since that earth removal things have stayed pretty much the same shape around the edges. The interior map changed with the construction of Sears shopping mall in the 1960s and the expansion of the population into New Town where people could have a garden and a ranch house with modern conveniences. 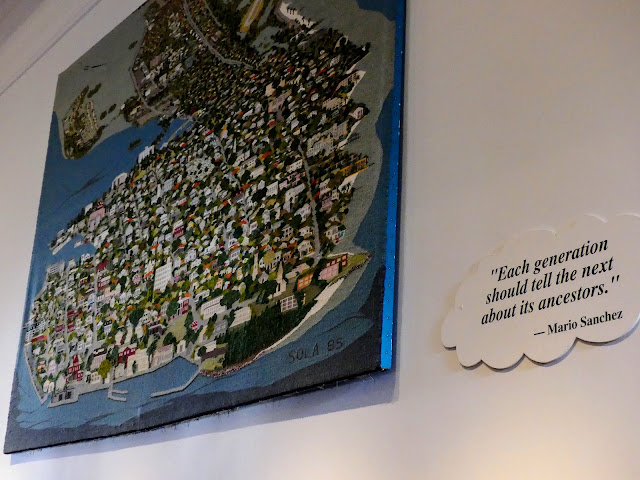 Back in Sanchez's day there were stories to be told: 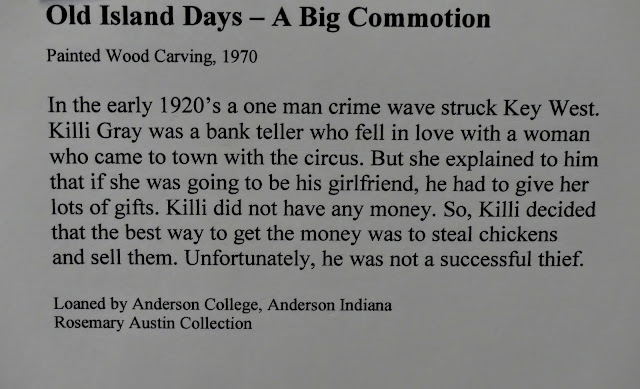 Which commentary refers to this: 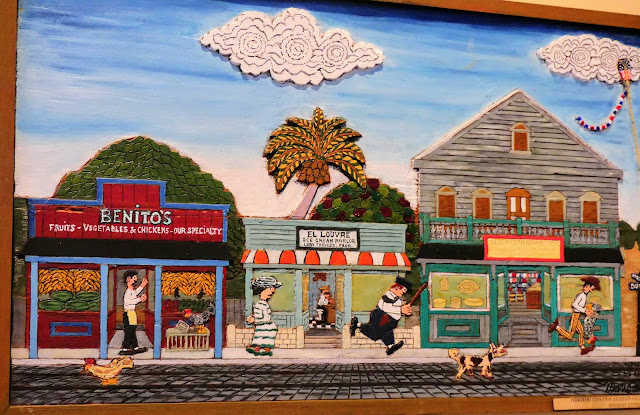 I have read the newspapers discussing the arrival of the train in January 1912. There were lamentations that the service would wreck the Key West spirit, that of an isolated island. Many people had never seen a train before that fateful day. Flagler's railroad took all day to get to Miami with it's load of people and Cuban winter fruit and it never turned a profit till it was wrecked by a hurricane in 1935. Below the picture showing the arrival of the first train.

In those days it was possible to drive  a car to he mainland but there was a ferry from Big Pine to Matecumbe and another from key Largo. It was an epic journey made easy and comfortable by Flagler and his slow moving train (25 mph maximum speed on bridges). Sanchez provided an invaluable and beautiful record of those days. 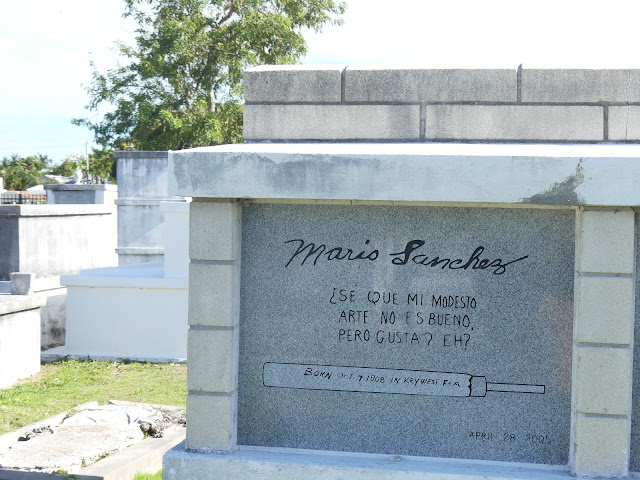 " I know my modest art isn't good, but people like it hey?"
Posted by Conchscooter at 12:00 AM No comments: