It's A Wonderful Life

Key West is more than southernmost party town. Key West is boring middle America sometimes, no time more so than at Christmas, when people take it upon themselves to parade. Because Key West is actually Parade Town USA- any excuse is a good reason to walk down the street all dressed up. And no parade is worth a damn if there aren't motorcycle cops leading the way. Here we have Officers Villareal and Hartle flashing their lights at their favorite dispatcher: 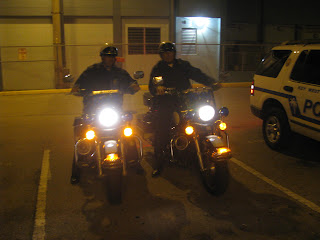 I am not by nature much of a sentimentalist, and saccharine displays of cloying sentiment irritate me. The other awkward side to my personality is that I can't stop asking myself difficult questions. I mean if Jesus really was born in a manager in an Arab village to an Aramaic speaking family doesn't that make him an Arab? If this is an accurate representation of his homies why are we locked in holy war with Islam? (The kid in front is actually a 21st century All American high school kid with a temporary though doubtless expensive ailment. He should have been hobbling with a wooden stick to be authentic): 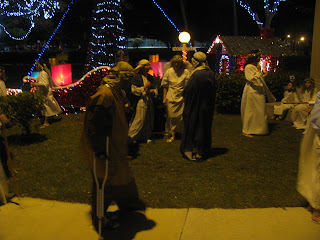 Well, despite all the questions that buzz round my brain like insistent and annoying bluebottles we need to move on and hoof it over to Truman and White for the start of the Christmas parade. Yay! 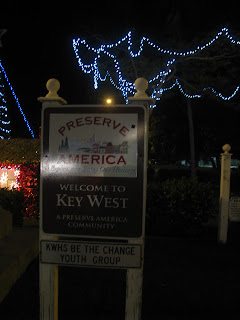 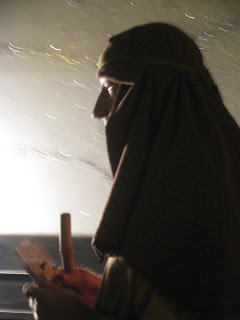 On the subject of disguises go figure why this kid is sitting at her outdoor patio set dressed in a pointy hat...Oh yes, Santa Claus the Nordic heathen depiction of winter has been transmogrified into the Christian depiction of Saint Nicholas, bearer of gifts (Thanks to Macy's Department Store for that commercialization of the annual Yule Log burning multicultural winter gift buying frenzy). 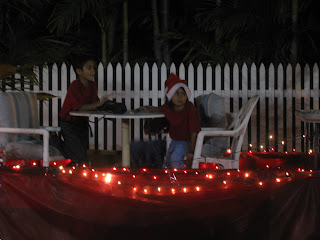 I'm not very good at small talk so here are a few images I snapped from the side of the road in poor light without the benefit of my tripod, pictures that have value to me because they show ordinary people in Key West, fully clothed, raising families and celebrating living in a neighborly small town. Jimmy Stewart failed to make an appearance, which was probably just as well as he's been dead a while, but the spirit of that corn pone movie is alive and well in Key West. 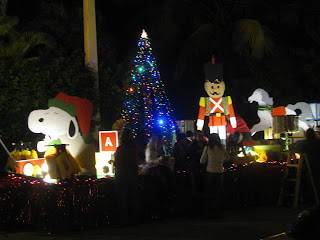 You can't have a parade without motorcycles in my opinion. In that, I am apparently not alone: 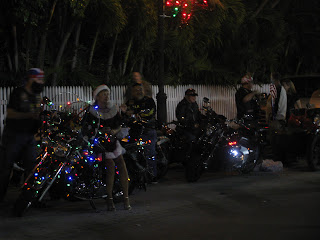 Representing snow is part of the Christmas shtick and very happy I am that snow is represented by bits of white material of various kinds: 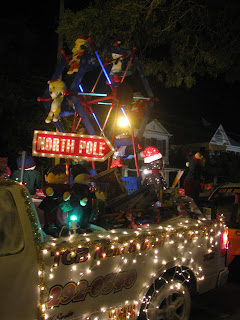 The other essential component of a proper parade is a fire engine or two. And check out the kid, children are important if you are going to have a proper community holiday parade: 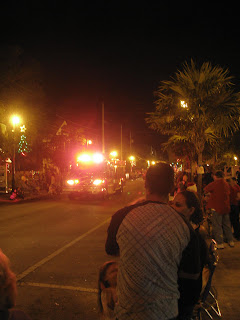 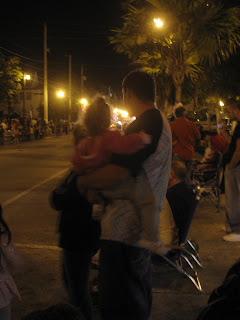 Music is good too, endless variations on the glorious Christmas Hymns that came out of the Christian tradition in Germany and that have been mangled and rendered almost unrecognizable as muzak and movie sound tracks. Sigh. They were having fun though: 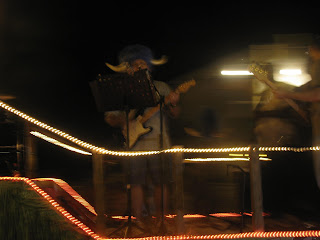 Angels or angles? Christmas is a good time to double check your spell checker. 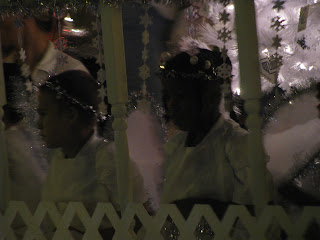 A young Methodist. I am not a big fan of the my-god-is-better-than-your-god school of nonsense but we should doff our elf caps a moment to the memory of John Wesley who contributed not a little to the notion of social justice as a Christian cause. 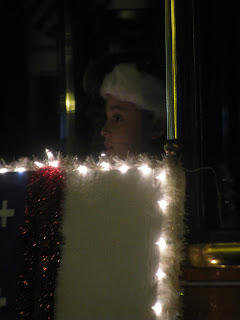 During the nudity of Fantasy fest there is the habit of launching beads at passersby. During the Holiday parade they toss candy and the kids grovel like chickens pecking in the dust to grab what they can. We had a well trained group of youngsters next to us who shouted cheerful slogans directed at each particular group of passers by ("Nice Car Mister!" they shouted in unison at the dour driver of a Mazda Miata. They were rewarded with an absent minded shower of candy from the driver who could not bring himself, however, to crack a smile). It was an excellent spot to sit, and we enjoyed a few surplus tootsie rolls and Hershey chocolate bites, the overflow of the excellent young ragamuffin barkers on our block. 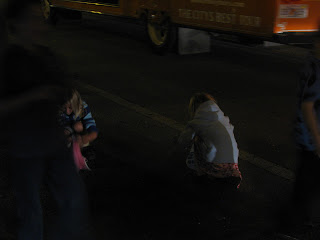 Nice car, mister, indeed. This lot were smiling as well as tossing our sugar to appreciative youngsters. 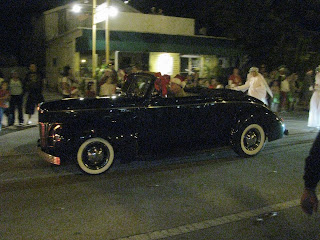 "Ooh!" my wife squawked, "Get that one!" I did my best though everything was against me: no light, too much movement and sugar jitters: 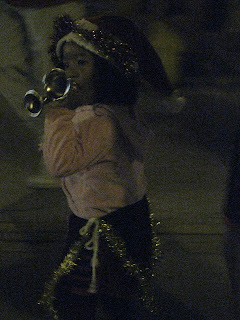 In years past I enjoyed the juxtaposition of cultures in the parade, the boy scouts, mormonically anti-gay walking behind the trannies of the 800 block of Duval, adult themes tastefully done next to ebullient children's religiosity. This year I think there may have been some reaction, perhaps unconscious, to the excesses of a Fantasy Fest fueled by depression economics and an adult desire to vanquish reality for a week. Lots of people complained about the excesses of Fantasy fest. The holiday parade was a succession of church floats and sedate business advertisements. These men dressed as gender ambiguous angels (angles?) were from the Metropolitan Church ( the gay lot as far as I know): 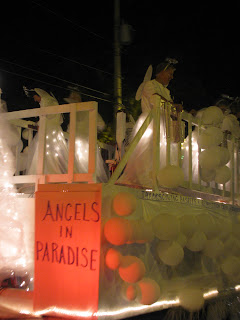 In it's editorial in cheerful support of the small town "values" of Key West the editorial board pointed out the scenery in the city which provides a suitably Victorian backdrop for the Dickensian holiday parade: 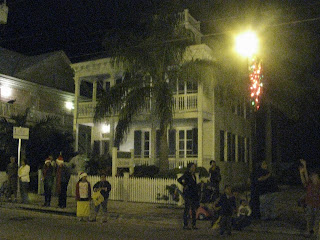 Some parents in Key West like to complain that there is nothing for their kids to do in town, other parents get off their duff and take their kids to the playing fields for some healthful sporting activities. The city built a hockey rink (Southernmost Hockey League- ice free) and it is enormously popular. Witness: 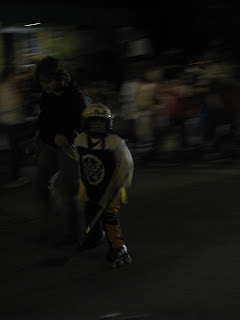 I am not very child oriented but I do like dogs. I saw this critter riding in a heavily decorated bicycle wagon and my heart went pitter patter. It got worse. 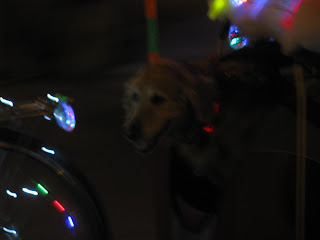 The SPCA parades with a bunch of dogs with little "Adopt Me" jackets and guess what? An actual yellow Labrador bitch marched down the street on our side of the road. Lots of people say they have labs or "lab mixes" but this was an actual female yellow lab and I knew I had to have her. My wife is resisting so there is some friction in the home. My wife says the economy is bad, vet bills can be horrendous, we are planning a three week vacation in Italy next year, etc etc... I say the economy sucks so lots of people are abandoning their dogs. Big dogs are hard to find homes for and that lab needs a home. We are at an impasse and I don't think it's going to go well for my side of the debate. My wife usually wins. Failing a Labrador, here's a picture of an angel (angle). I only realized afterward her legs are unsuitably illuminated but this is a concession to the pervs in the audience. You know who you are: 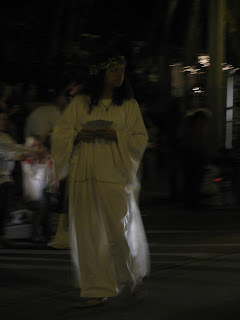 The city commission just approved a concession for a second trolley tour company in the city and residents are in a ferment about how many tours can the city sustain. That will be a thought for another day. This is a Conch Train in holiday trim: 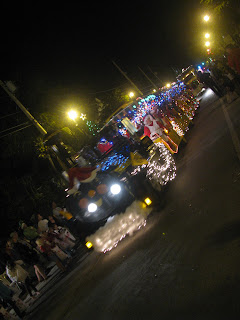 This picture is a reminder that frost is banned in Key West and we have to make do with make believe snowmen. What snow men have to do with Christmas I couldn't rightly say, but who am I to argue with inexplicable traditions? 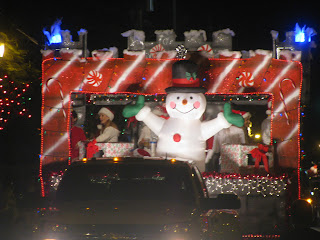 A tip of the hat to our friends and colleagues in Public Works who are routinely maligned for failing to do a variety of responsible tasks that they actually do very efficiently. Here is a Government Truck cleaning the street instants after the last float passed by: 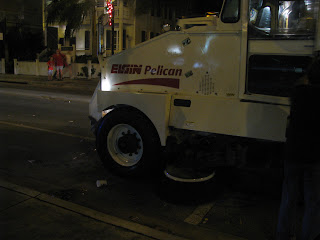 And here is the proper sentiment of the season from all the families and ordinary working people who live in Key West and put up with the noise and chaos that two million visitors a year bring with them. 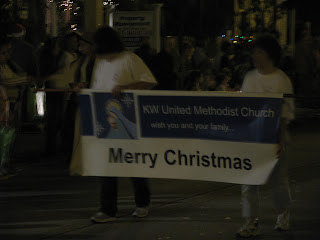 Spare them a thought the next time you are debating how much to tip. Key West is one of the most expensive cities in Florida and sixty percent of the city's economy is sustained by visitors they say. Merry Christmas indeed; we can only hope.