Lights Out On Duval Street

The rule in the city of Key West is that bars must close by four in the morning and alcohol cannot be sold until seven. Which on the face of it seems pretty unrestricted but I think if this rule were not in place the inferno that is Lower Duval when the bars are open would never end. As it is bars will start closing as soon the customers go home but by four in the morning the shutters must come down. Sloppy Joe's as not often seen by visitors to our fair city: 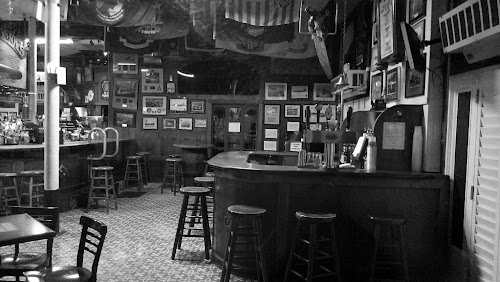 I am not fond of crowds but Duval Street at this hour is perfect to my jaded mind. Had I not been on my lunch break I'd have wanted to share this with Cheyenne who loves the smells and debris of Duval Street deserted. 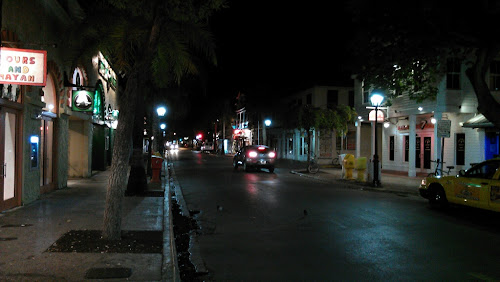 It's amazing to think Rick's complex has ten bars on one entire city block, owned by a city commissioner. I suppose my total lack of ambition would never pose the conundrum but one wonders why he hasn't found something better to do with his time after decades already spent raking in millions from all the cheap beer sold in this place. The odd thing about these types of people is that enough is never enough; they have one bar or restaurant working out in spite of the odds in a cut throat trade, so they want another and another, and pretty soon one owner has half a dozen places all to himself and the band of investors. 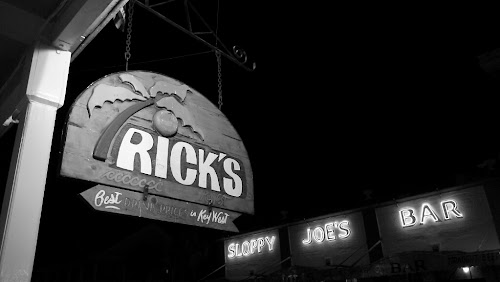 I don't think the night time drinking crowds are what they were during the boom years, but as I am neither a bar crawler nor a night owl drinker I cannot be sure about this. Why take my word for it? I have never had a drink at Rick's or Sloppy Joe's. I had one beer once at Captain Tony's and another at Irish Kevin's one strange night and I went to see a performance once at Hog's Breath upstairs, above the raucous drinking downstairs. So my favorite place is lunch at Finnegan's Wake, so what do I know about the bars of Lower Duval? I suppose I should get myself an education. 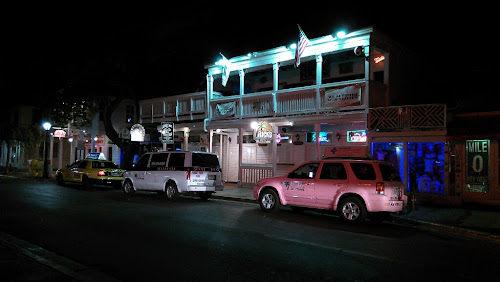 Irish Kevin's in sepia here, looks like an old Western bar in Texas or Nevada or somewhere like that. Some people thrive on bars but I can't stand the noise and my subsequent inability to hear or to talk coherently, and I don't drink cheap beer if I'm paying for it because I like my beer to taste not hoppy but of beer not gnat's piss. I am a picky bastard aren't I? 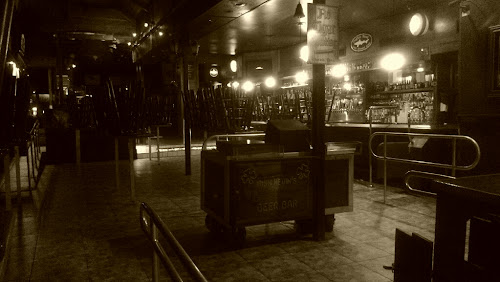 Yet, despite my lack of enthusiasm for bars when they are populated, I am like my dog in one respect. Cheyenne the anti-social likes to visit dog parks after the other dogs have left and only their scent remains. It's not that she's mean to other dogs it's just that she prefers to be left alone to enjoy her sniffing by herself, unmolested. 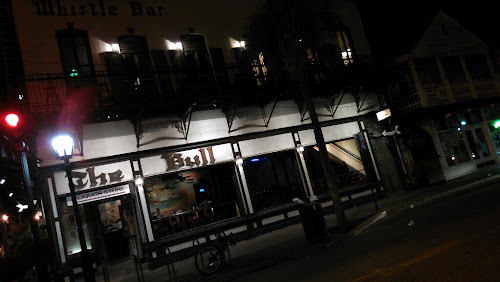 In that sense I love coming to Lower Duval even as the crowds leave and the street becomes as empty as an after hours dog park. I like seeing the evidence of people who were heard but are here no more. I like being able to stand in the street and not get run over while I take a picture. I like squinting through the glass at the empty bars, on silent display like stage sets or museum dioramas. Some of the them weren't technically closed as it was before the witching hour of four. Like the Bull: 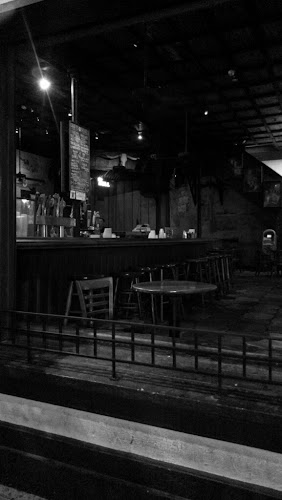 Charles Street was empty and quiet. The Red Garter is a strip club in the Rick's building. That whole white wall belongs to the Rick's and Durty Harry's complex of bars. Like I said, I have no idea why he doesn't sell and retire to do something interesting. Perhaps watching people drink and give you money is interesting. Not to me, there is so much more to be done. 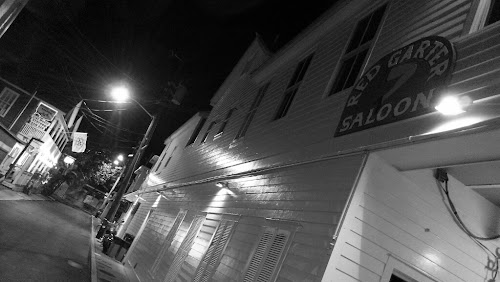 "Why you taking pictures?" the young man asked me aggressively, eyeing my sewn-on police badge on my shirt. He brightened up when I said it was for me and my albums, so he impulsively threw his arms open asking me to take one of him, Brian. Alcohol is a hell of a mood changer. 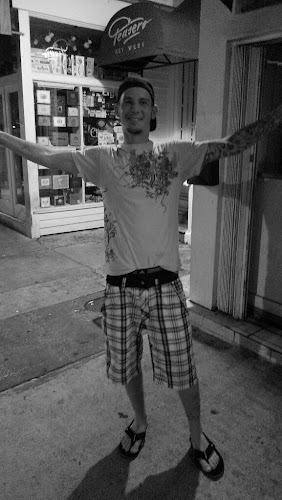 Coyote Ugly another fine franchise outlet in historic Old Town Key West and it was still open so I could hear a young woman, probably barely legal, yelling drunkenly across the street that she was soo ...sexy. I wanted to point out that if you have to say it out loud, it probably isn't true, no matter what you are talking about. 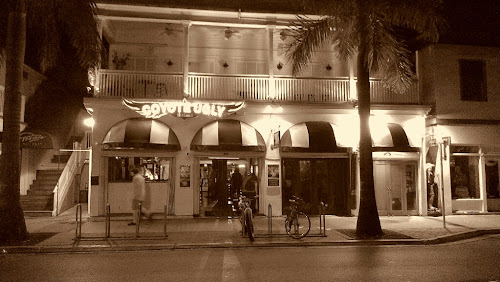 Greene and Duval, below, the epicenter of mass tourism and bar hopping in Key West. During the day! 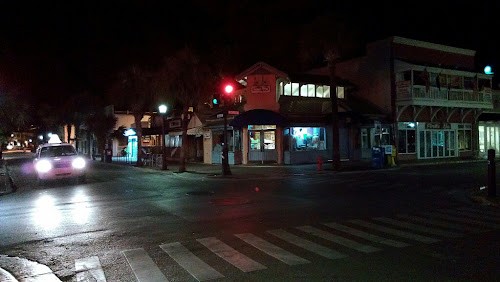 In the end for me the price of a bar drink is high and maybe if I weren't working I'd have done like this guy, picked it up at the Lost Weekend Liquor store and taken it home to drink in peace. 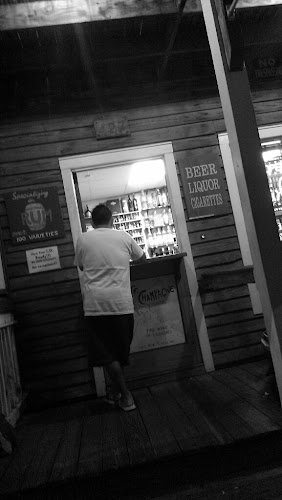 I read this list of foods posted, who knows when, at Shorty's market, a convenience store on Lower Duval. Aside from the misspelling I wondered about the foods on offer, fresh breads and pastries as though they'd never heard of Sysco food deliveries. Fresh baked? Really? I am astonished. 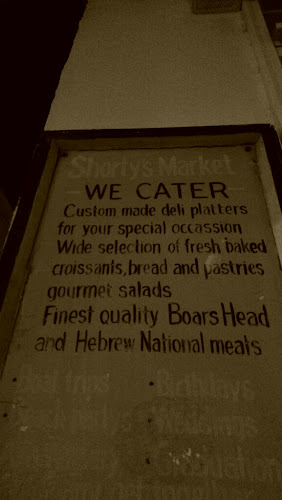 It's not that I never come downtown during day light hours, indeed I venture to say I a decidedly not one of those locals who sniff haughtily and point out they wouldn't be seem dead on tacky Duval Street. I come by, check out the people, take in a movie at the Tropic and maybe a beer at the Porch if it's not crowded. By way of proof here's my Vespa in front of the main tourist attraction: 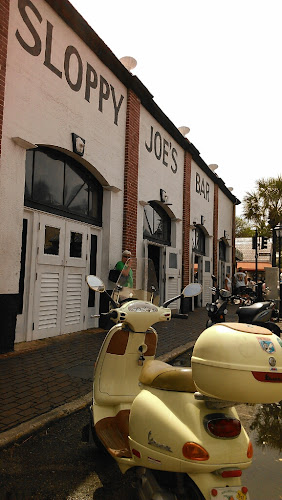 And here's my Bonneville pointing south on Whitehead Street as I made the circuit back to the police station at the end of my lunch break. 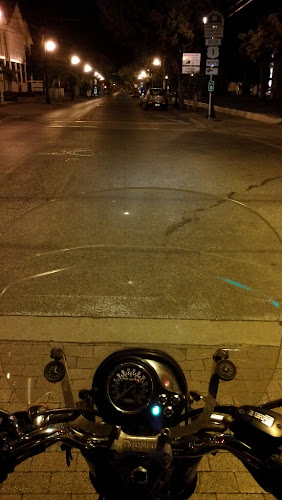 And I was riding in shirt sleeves, just because even though it was cool it wasn't cold last Tuesday night.