It happen quite often that we get 911 calls from distraught tourists who have managed to misplace their cars. Car theft in Key West is pretty rare, for obvious reasons, though sometimes domestic disputes end up in arguments over who owns the car. Theft though means you are driving for three hours on the only road out of town and the chances of making it are unlikely if the owner calls in time. More likely the hapless tourist forgot where they parked it. So, the pint is when I am a tourist I park near  a landmark and this erection (below) marks the Chihuly gallery (well worth a visit) so I knew where my car was when it was time to return. Pretty smart... 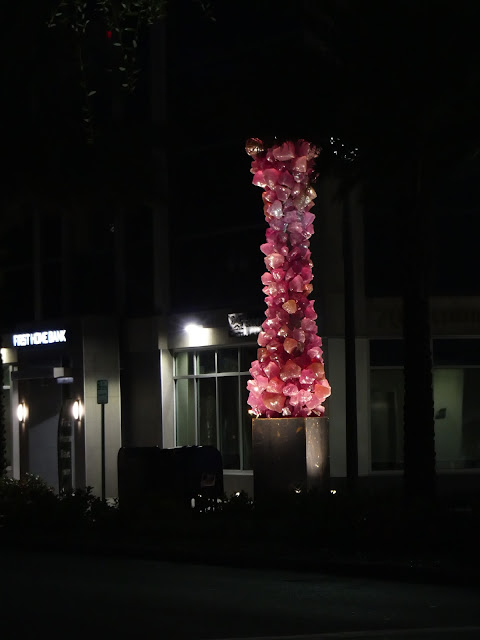 I have mentioned craft beer and Art flourish in St Pete: 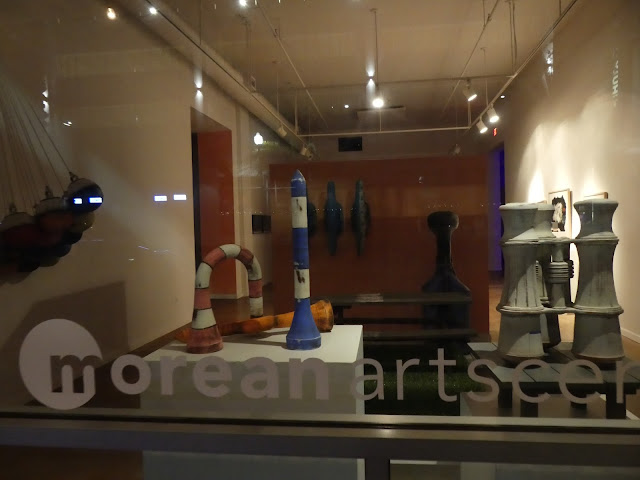 And Rusty found plenty of water bowls so no city so equipped can be all bad: 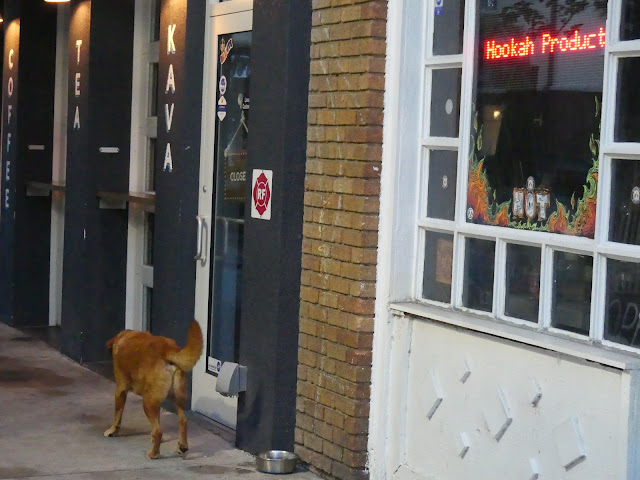 Also, and this struck me quite forcibly, there is no attempt to deny homeless people the ability to sit. I used this bench and was quite comfortable resting my pelvis. In Key West they would put spikes or landmines on any public seating not uprooted, as they did in Bayview Park which is now the sole preserve of the homeless in Key West as most people don't want to sit on damp muddy grass. But the benches are gone. 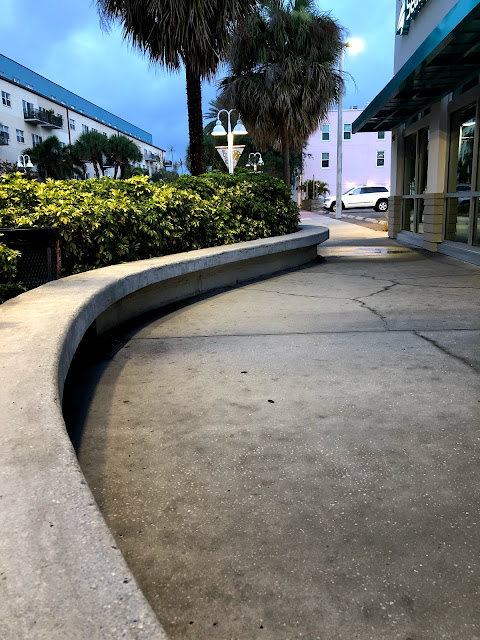 I'm not sure what a German Knodle is but I wouldn't mind checking it out. St Petersburg is quite a remarkably diverse town, even though you may have to drive miles to find whatever peculiar out of the way thing you seek. Martin's in Key West is a German restaurant but it seems rather non German to me since it moved onto Duval Street. I suppose it had to broaden its appeal after lurking happily on Appelrouth Lane before that, when it felt much more ethnic and interesting to me. 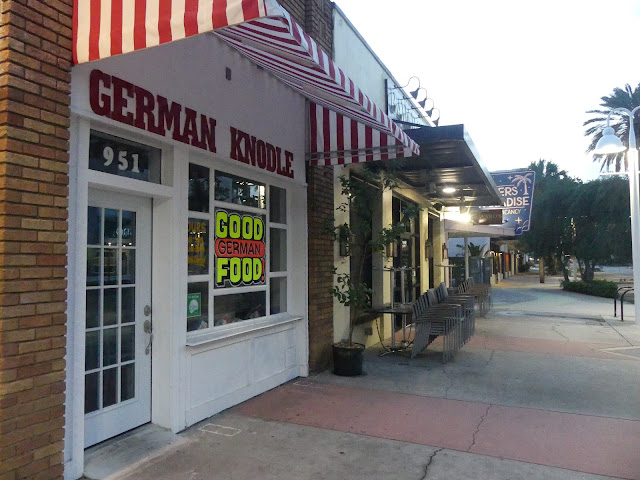 A traffic circle! Proof that God loves engaged motorists. Traffic light sin St Pete are worse than Key West as there are more of them and they change at random after excessively long waits instead of responding to traffic or lack thereof. You can spend hours idling at red lights with no other vehicle in sight. 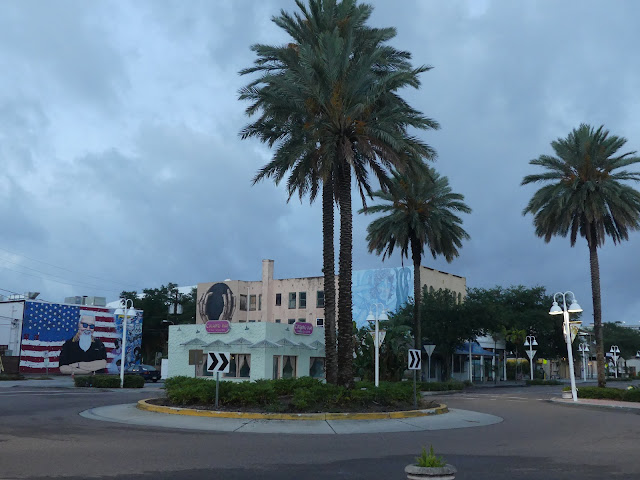 I think they call places like this "gritty" but the urban art is always present. 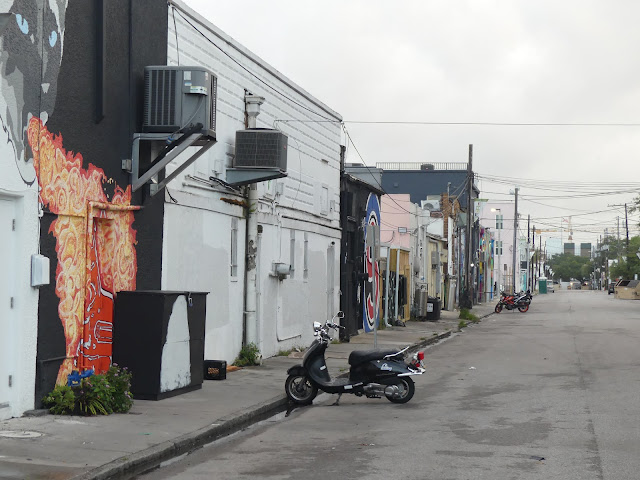 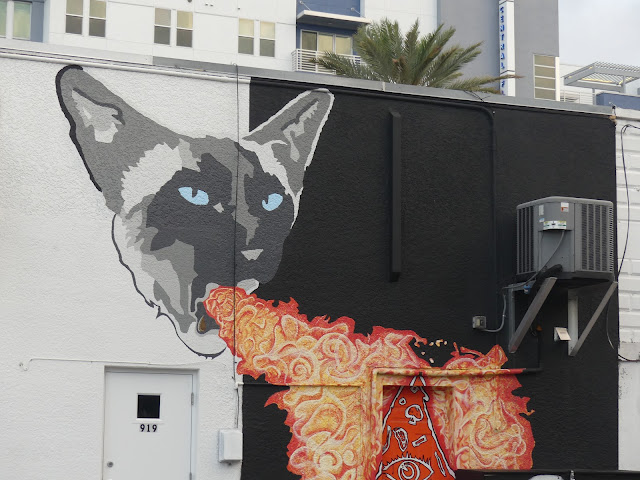 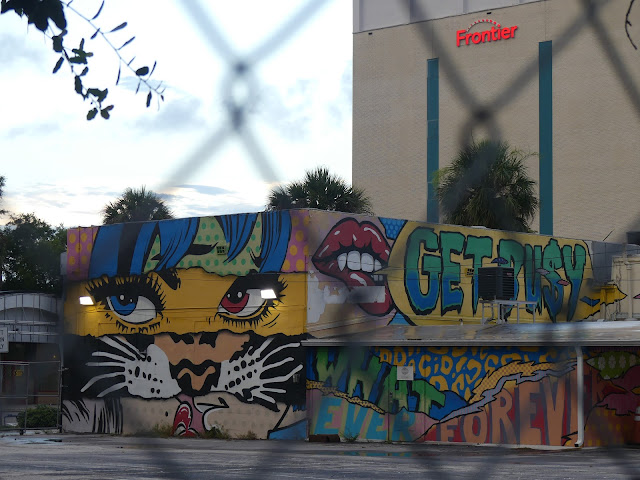 Central Avenue. Now you know why it can take forever to track things down in this sprawling metropolis. What you want or need is out there, just go west young man. And send back reports. 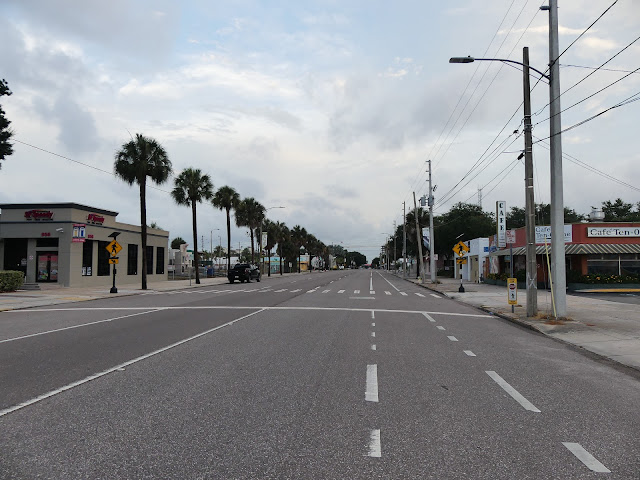 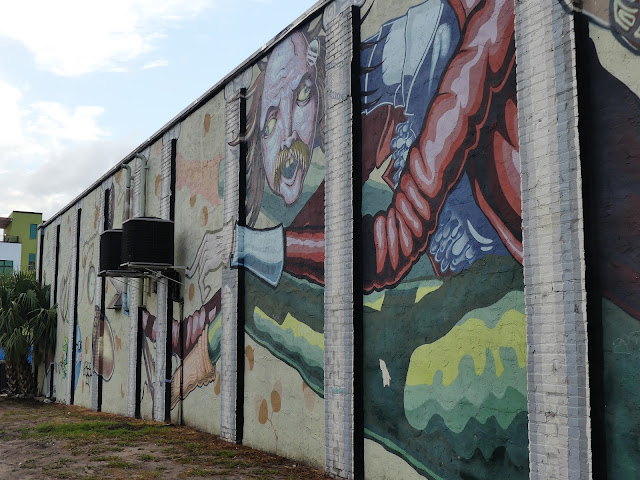 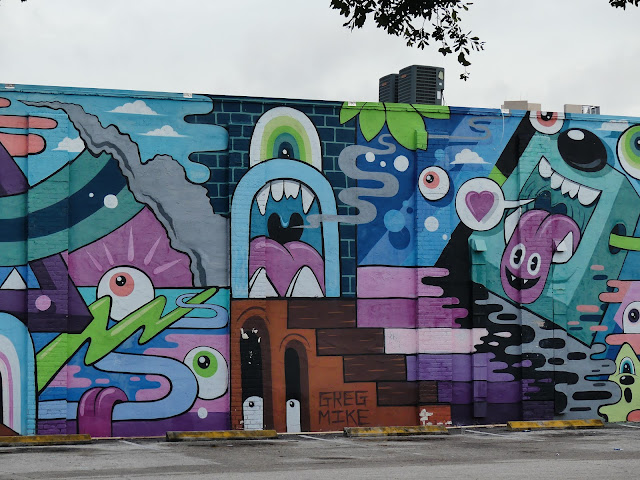 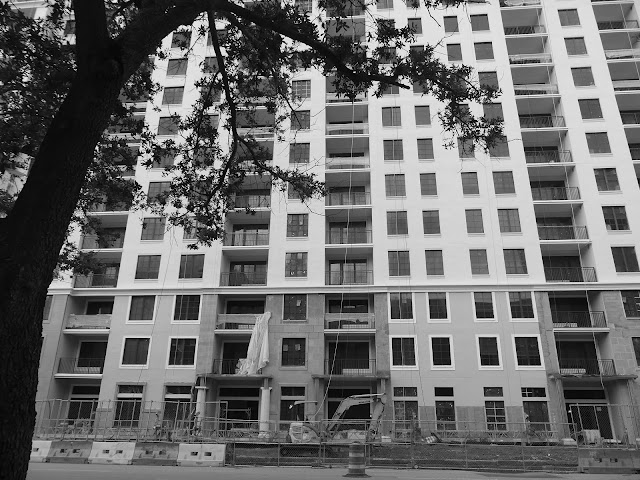 Rusty minding his own business. I finally found a resident of what may have been a green bench. 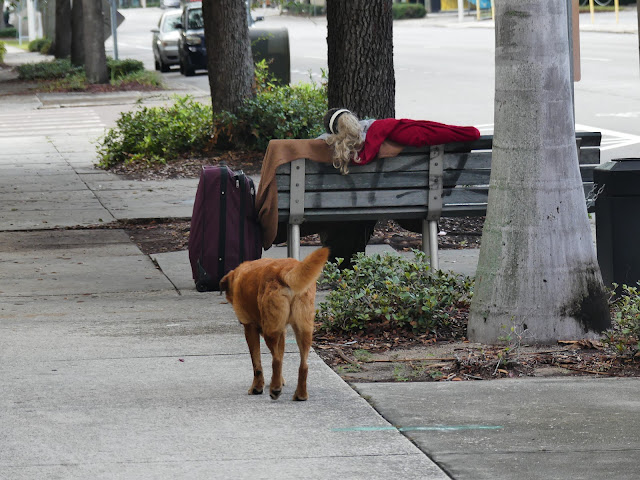 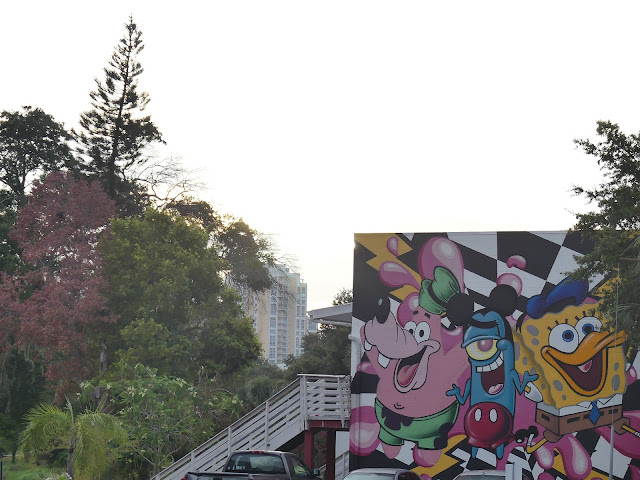 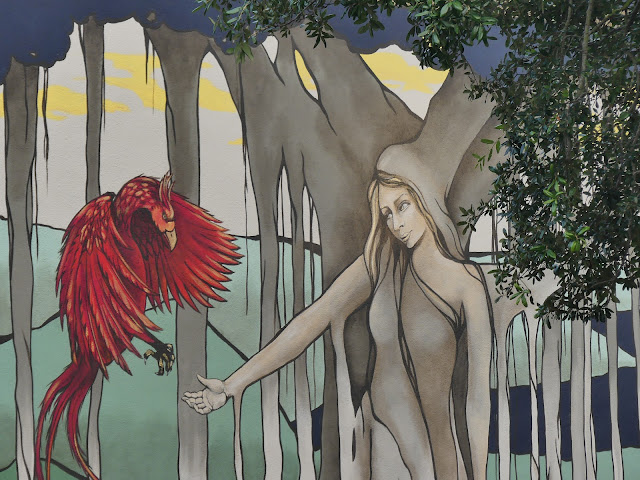 This mural I liked especially. An old dinosaur dressed to kill, with a fishing rod. 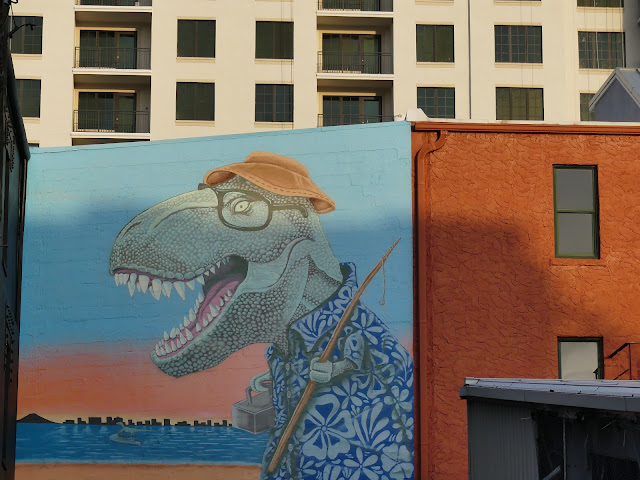 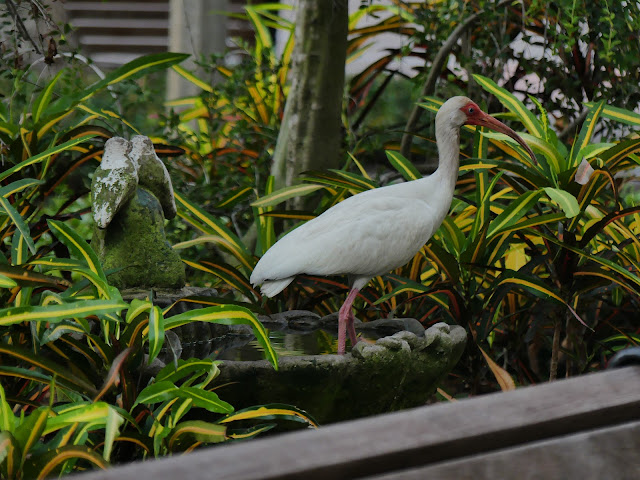 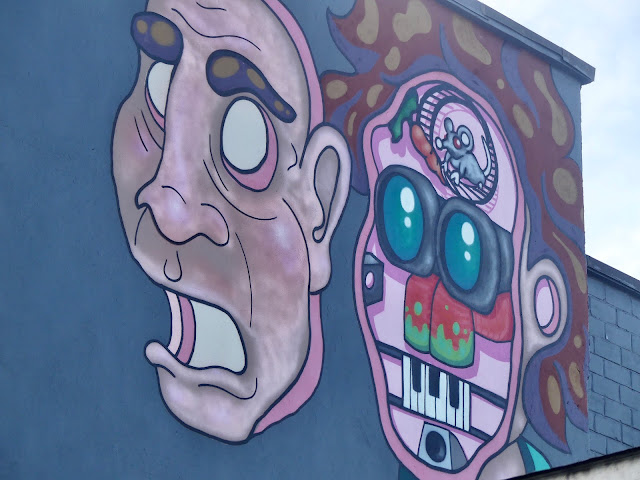 Impasse: not here as there are plenty of streets back to the car and we had the Dali Museum to contend with next. 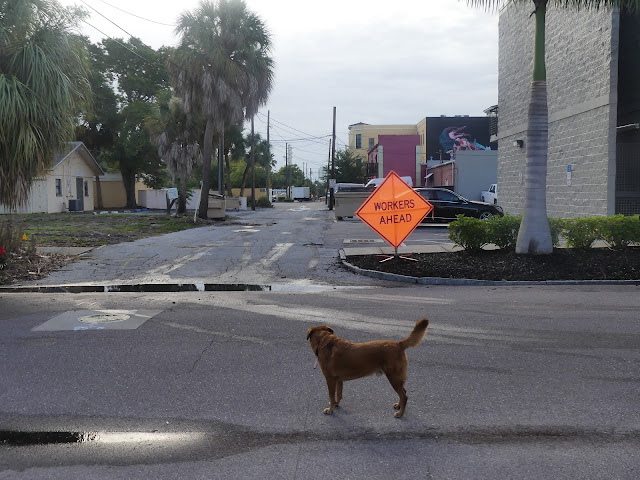