I just discovered they are letting dogs into Willie Ward park, a little pocket park on Catherine Street next to the community pool. It's named for Willie Ward, a civil rights leader, singer, radio host and press foreman at The Key West Citizen for many years according to the only record I've found about the man. 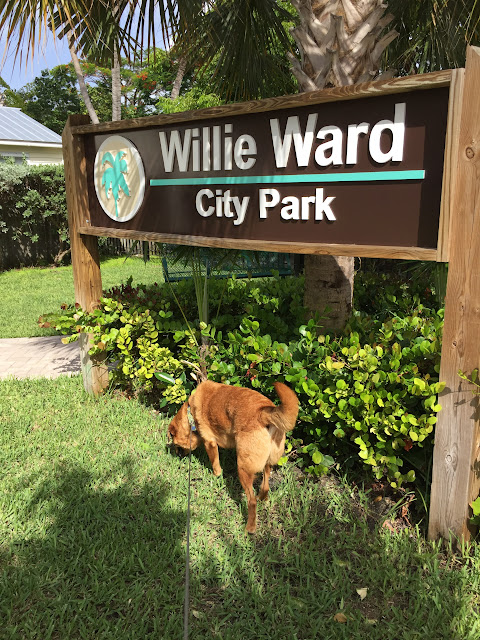 They used to have signs saying "No Dogs" and as I am a mostly law abiding type I kept myself and my dogs well out. These days there are no such prohibitions and I quite like Willie Ward so I was happy to lead Rusty to paradise found. 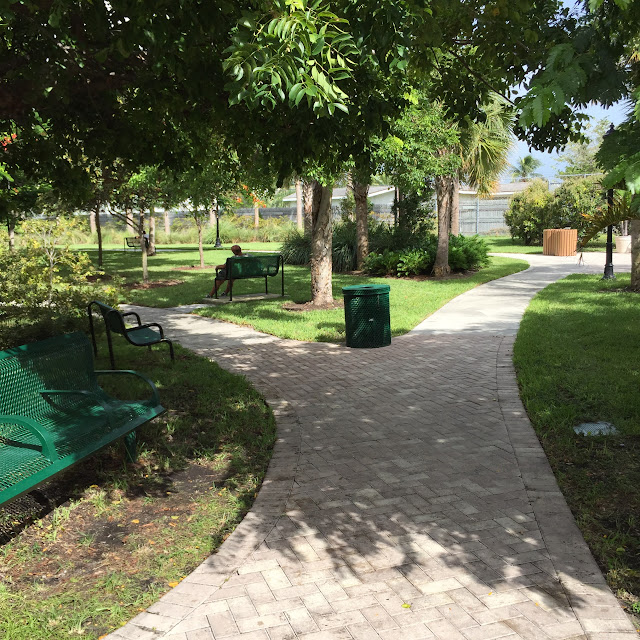 The pool is a peculiar structure,, raised well above ground which at certain angles gives swimmers views out to the Straits of Florida to the south: 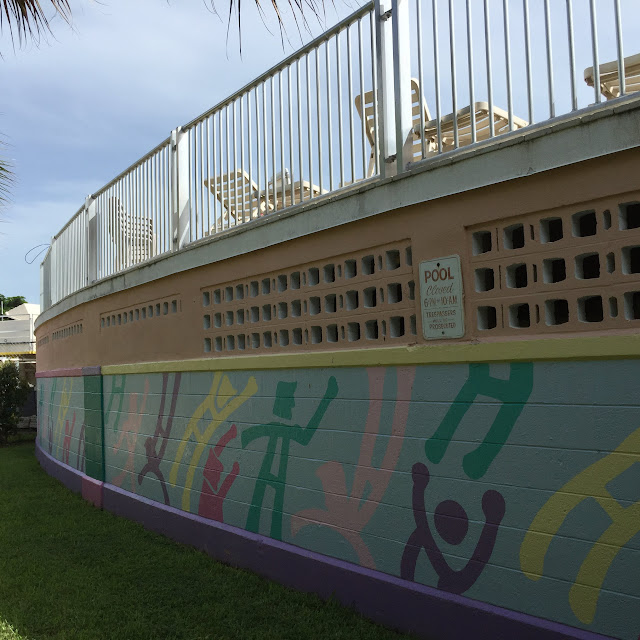 And, lo and behold there are actual park benches in this city park. You don't see these very often in Key West and Willie Ward is covered with places to sit. 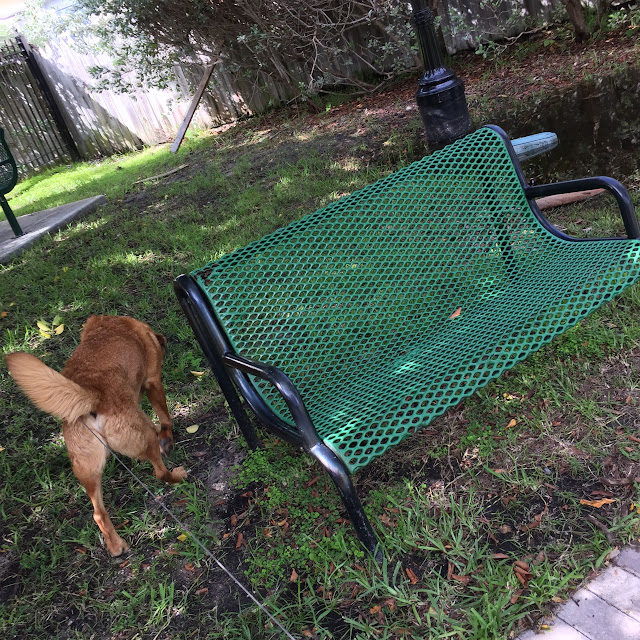 Some have the anti sleeping requirement of added armrests but not all. 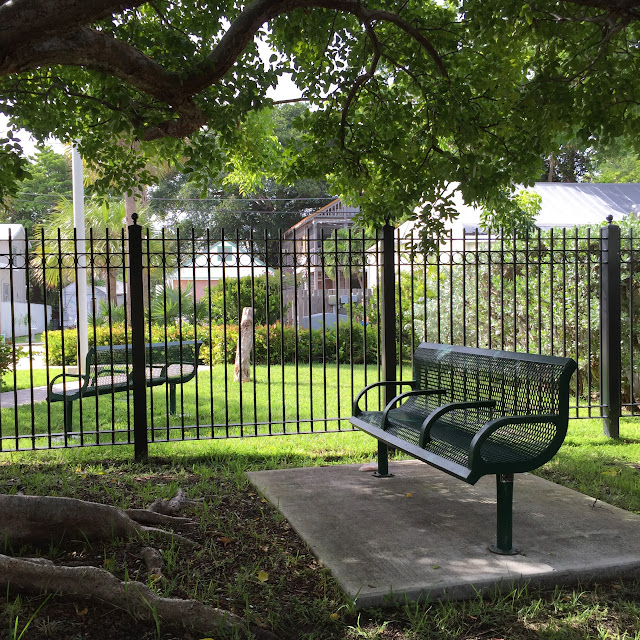 Willie Ward is lush and green and shady and lovely. I have no idea why this  quiet little corner of Key West is  so ideal. 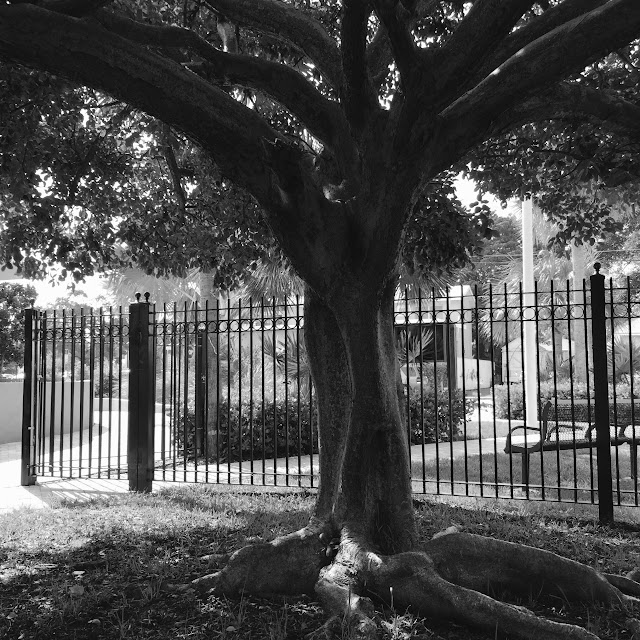 Every ointment has its  fly and there were a few residentially challenged citizens enjoying the serenity as happens in Key West. 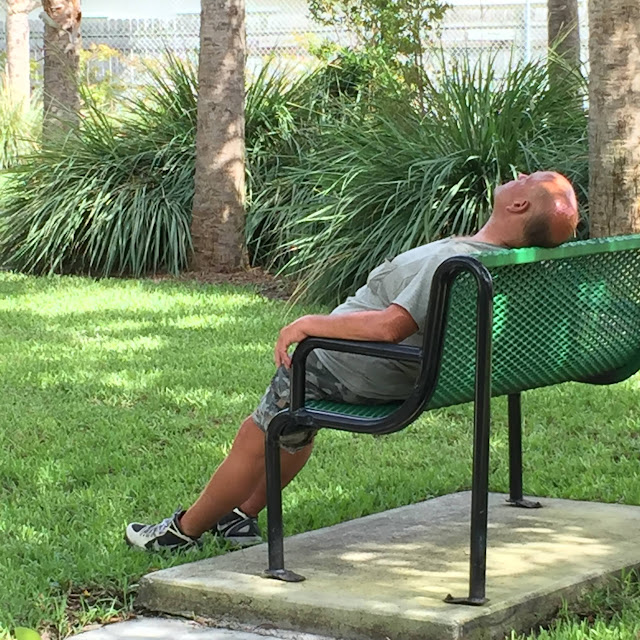 Rusty found them fascinating but for the most part they fill me with sadness. In this country poverty is frequently equated with some obscure moral failing but in my experience as a reporter and a dispatcher most homeless are suffering mental health issues,distant families and all the attendant de-motivators like drugs and alcohol. 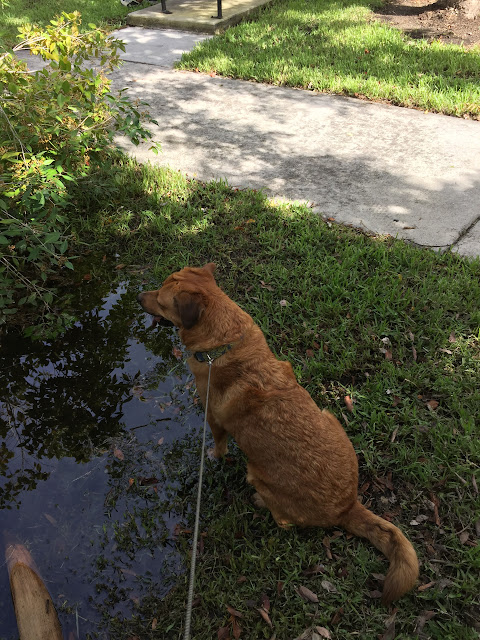 I stopped reading Facebook as I got tired of the negativity and anger but hatred of the homeless keeps seeping into my consciousness when I hear people talk about the homeless as though they are on a  scam by not working. Would you hire him? 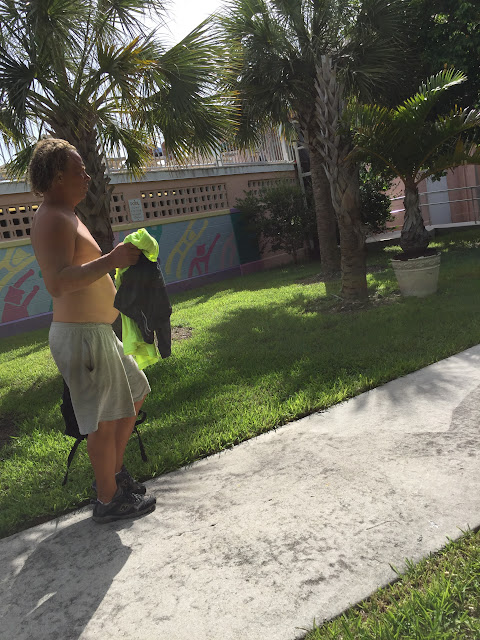 My overriding impression is that being homeless is profoundly boring. That and the fact that work gives you a place in society, a purpose and a role. I  recall the plan to save money by closing mental health hospitals and this is the result. Tax money saved, parks filled with zombies.  You get your money's worth. 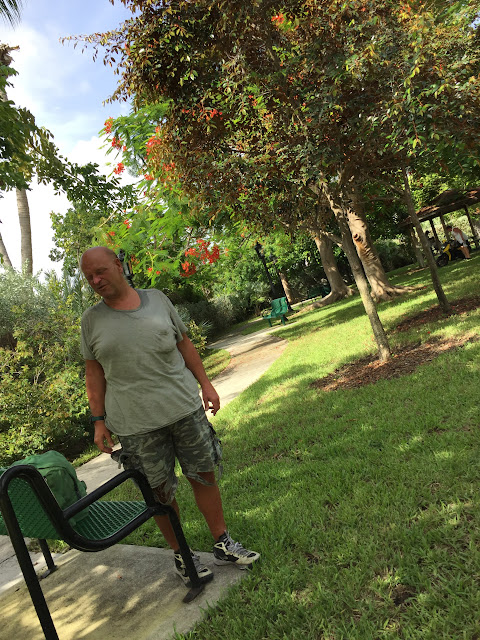 Then there are dog owners in the park. Or at least this one was hanging out. His  little rug rats were what had attracted my butch masculine dog's attention, not the homeless zombies. 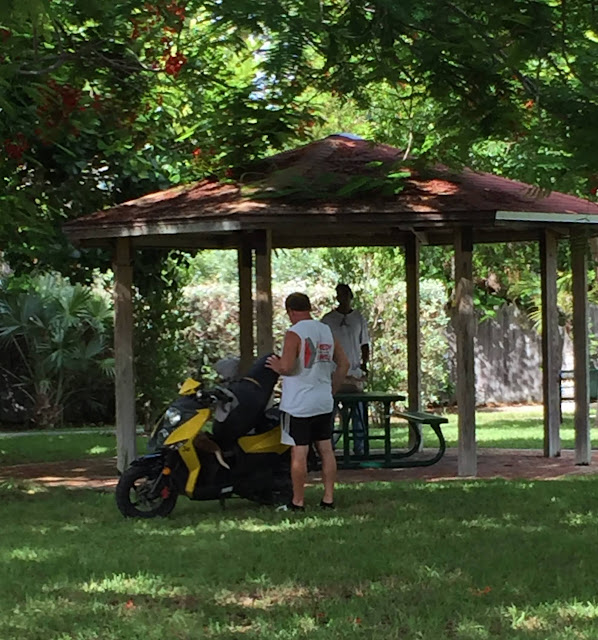 It's a pretty well laid out park... 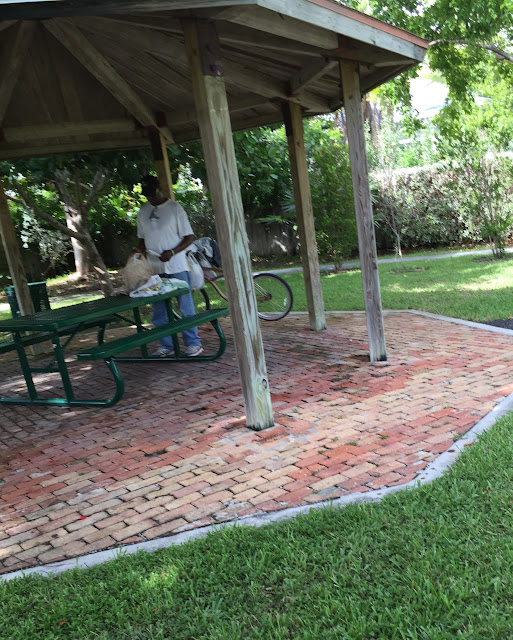 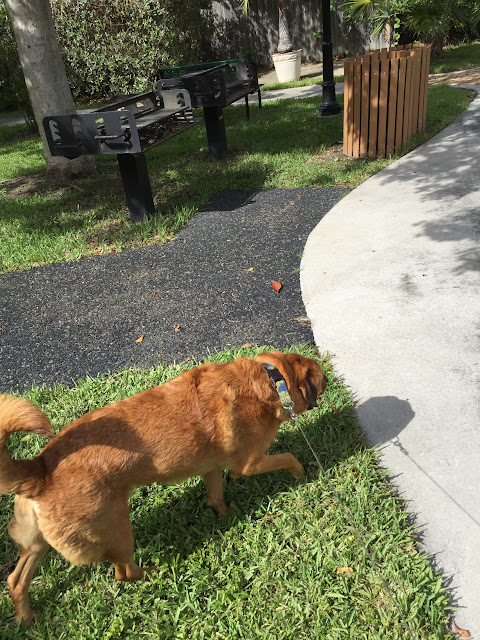 ...the blessing of recycling bins even: 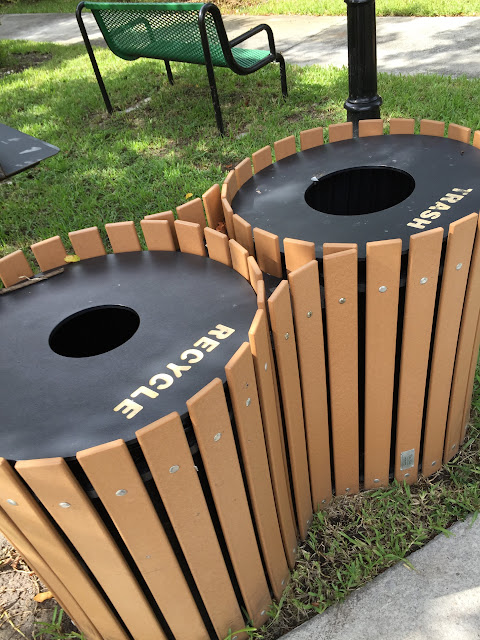 None of which was enough to convince the dogs to stay longer and off they buzzed. 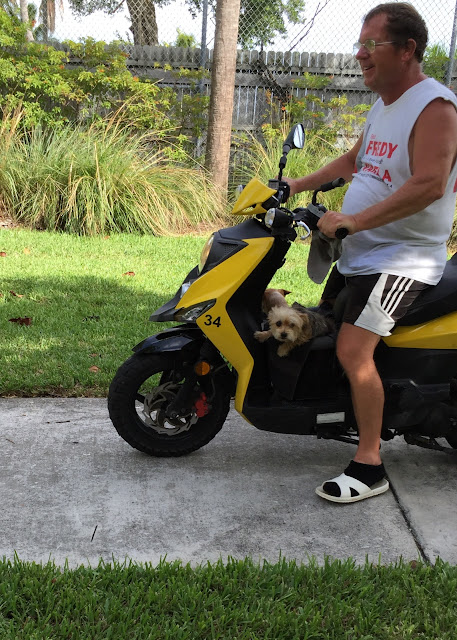 Lots of rules, none of which mention motor vehicles but I can't imagine scooters are encouraged to be in the park, even those ridden by visitors. 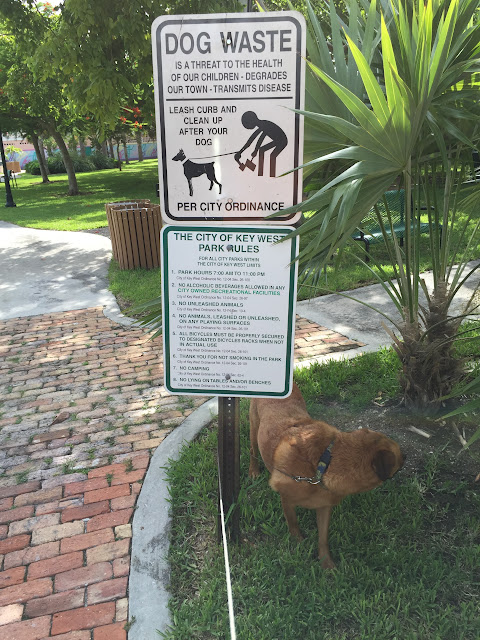 Willie Ward will see more of Rusty and I whenever we need shade and a rest.
Posted by Conchscooter at 12:00 AM 2 comments: