Trouble Is My Middle Name

So on the weekend the electrical system took a dump on the Bonneville, a fault whose full import has yet to be understood. Nothing too serious no doubt but enough to stall my commute. I was pretty sanguine about the problem as I got a ride and arrived at work on time, barely and Jiri will sort out if it is the new battery or or the old charging system. No problem, still I like to ride rather than drive and my 27 mile commute is my pleasure as well as my burden. My wife knew what was coming when I sidled up and asked if I could borrow her Vespa. "Sure" she said which was easy for her because her classroom this year is new digs and she hasn't figured out where on the campus might be a safe place to leave the ET4. Usually she commutes with gym gear and files and papers littering her car (my Asperger's causes me to shudder each time I ride in her car) and then she rides around town as needed on her 150cc scooter.

I like riding the Vespa and I sneak a trip on it as often as I can but I don't like to impose on my wife. However there are days when the prospect of being shoe horned into a car just burns me up. I get bored in my zombie box, just like the other dawdling commuters trapped in their cages. Better to ride the pretty little 2004 cream colored scooter, which does 65mph and shocks the hell out of complacent dawdling motorists when they see me zipping past them and treading on their SUV penises as I go. Ha! 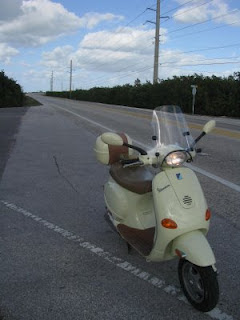 Meep! Meep! I was having the usual ball perplexing an early bird tourist leaving Key West before dawn in a convertible showing off the Keys to his hot date and wondering why the moped was passing him like he wasn't there. Further along a car pulled out of a side road and paused in the travel lane while the driver gathered his/her bearings instead of adjusting to the road in the on ramp that was thoughtfully provided for the purpose. The devil was in me and I slowed barely perceptibly, took the speed up ramp and passed the dazed driver adjusting her/his crotch in the travel lane. That was decidedly a trampled penis because my temerity was rewarded with high beams aimed at my mirrors as I floated off toward the horizon. Better the high beams than the car windshield fluid aimed my way by zombies annoyed that they can't shake off the moped. I follow the two second rule religiously so fluid arcing over the car doesn't usually get me.

It ended badly. The engine ran perfectly but suddenly we lost way and I knew instantly the drive belt had split. I coasted onto the ample shoulder, parked the Vespa and in the beam of my flashlight saw wisps of yellow insulating like material poking out of the transmission. It happens that modern scooters break their belts usually without warning and when they do they disintegrate into their component woolly parts. I set off in the muggy airless morning to walk the four miles home. 23 out of 27 miles wasn't bad and the belt broke in a safe spot. All was well. I ended up catching the Lower Keys shuttle for the last two miles of the journey home. I arrived barely half an hour later than usual around 7:15 am. My wife slept through the whole drama and only awoke when I returned from walking Cheyenne and picking up the Vespa with the trailer.

Sooo, my Fusion needed new tires and had a failing battery, fixed by Sears Automotive, my Bonneville needs diagnosis and the Vespa needs a new belt and rollers. My wife says this is the series of three issues and my forthcoming ride home from Iowa on the new-to-me 1979 P200E Vespa will be flawless. Perhaps she's right. The old Vespa needs no battery and uses no belt and is said to have tires with lots of tread. I hope my streak of bad luck is over now. Please. But I do have to launch the boat for the first time since the little outboard was serviced this summer...When we used it last summer it wasn't working well and now I hope my new mechanic did actually find the problem as he promised he did. Just now though my luck with engines is terrible. If I didn't have bad luck I'd have no luck at all as the saying goes...