There is a little storm brewing in the teacup that is Key West about a short interview segment of a program purported to be news, on the notoriously "Fair and Balanced" Fox network. A five minute segment of street interviews broadcast on the Bill O'Reilly program damns Key West eternally as a modern day Abilene inhabited by lawless refugees from the real world who live on the margins and who in the words of one brilliant interview subject do "hookers and blow" for entertainment. We have no Internet, bank accounts or lawful pursuits they tell us, much to our own surprise. 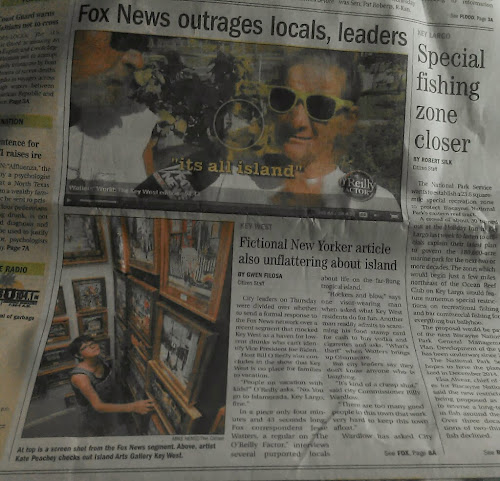 Apparently Fox interviewed "normal "people according to the Mayor, a normal person self described, whose words of wisdom were cut possibly because they were plodding and mundane as politicians are wont to be when trying to impress strangers with reasons to visit their town. When the editors sat down with the footage they got in Key West what do you suppose they found? A gold mine of easily directed half wits ready to say anything to get on TV. And they did say anything:

The thing is the humor works because there is a grain of truth in the gross exaggerations presented in the story. You may have heard the joke about what you call the guy wearing a suit in Key West? Defendant...But on the other hand I don't own a suit or a jacket or even a tie and I do not feel the lack of them. And how many Americans do you know go to work each morning like this guy, hauling his wares behind him like a 19th century traveler? 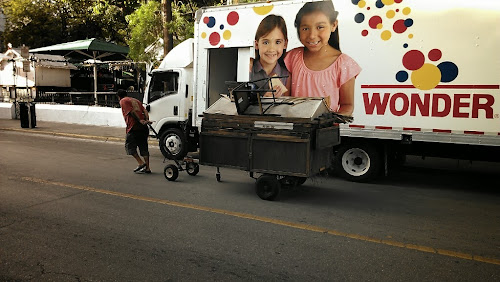 He has a job, he sets up shop on Eaton Street and sells carved Conch shells. In this crazy town it is possible to make a good living in the tourist trade, but straight people like me also work "normal" jobs just like you. Unfortunately there are the wandering homeless folk who shuffle through our lives daily hauling their own baggage of mental illness and despair. They aren't colorful or funny though they get lumped in with the drunks and idiots who make Key West look bad on the TV. 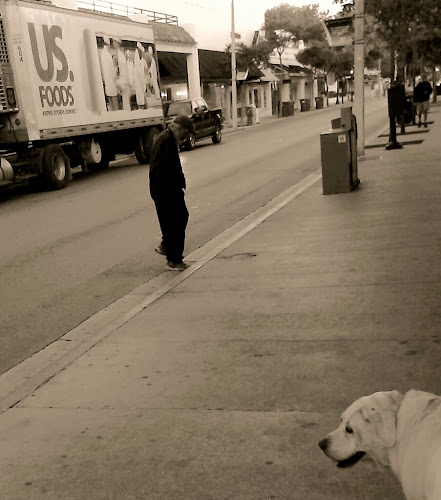 In the newspaper article some few ingenuous locals wanted to get on their hind legs and make a flap about this silly five minutes of make believe on their all important telly. I think calmer heads will prevail and the whole mess will be allowed to fade quietly from view. I mean really, if someone wants to make a fuss what will the outcome be? There is evidence everywhere that Key West is not in the mainstream and that alcohol and begging go hand in hand. The really good bits are there too of course, but short attention span TV can't winkle them out in a couple of minutes of make believe. 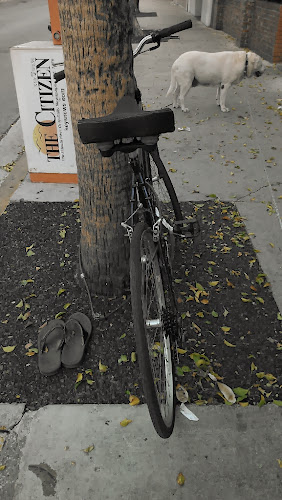 There was the usual claim that police are nowhere to be seen, which is another fine distortion. Police move people along, arrest some when they have cause and sooner rather than later they are back on the streets just like before. I remember some civic leaders bruited plans to try a comprehensive approach to dealing with the bums involving law enforcement, social workers the courts and probation but the effort died before it was born. So the roundabout continues merrily along. You gotta blame somebody for it, right? Might as well be the police, as usual. 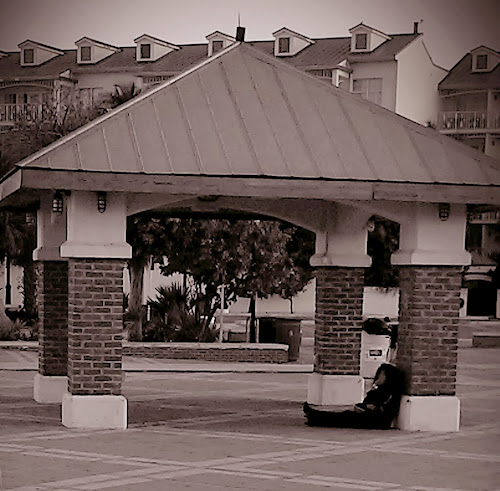 The chamber of commerce has issued a statement by not issuing a statement and telling the newspaper to forget it. It seems unlikely to me that anyone will base their vacation decisions on what one addle pated talking head thinks about this city, especially as he says he has been visiting Key West for decades. Wow, O'Reilly, aren't you the daredevil! I think he would be really edgy if he went to Mogadishu on vacation, or to volunteer at Mother Teresa's in Calcutta. Key West is more likely to give you crabs than see you robbed, though anything is possible because this is the real world and bad people live here too. 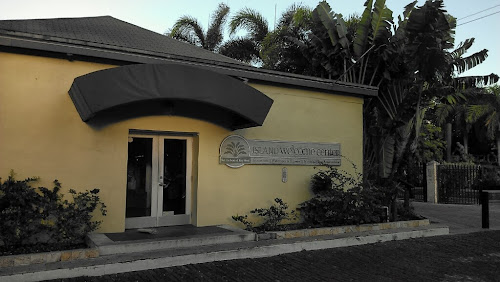 And I think that's where the problem lies. I doubt Bill O'Reilly stays anywhere outside of Sunset Key, the neatly groomed, terminally dull one percent enclave in the harbor free of chickens, bums and life itself. But this image of Key West as a colorful lawless frontier town is a myth that is propagated by people who want to show themselves as edgy and hip. So it is in their interest to portray this sleepy little town as some place only resourceful slightly reckless adventurers would visit. Phooey! Check out the way even the middle class have to rough it in Key West, that is if they don't choose intimate five star guest houses... 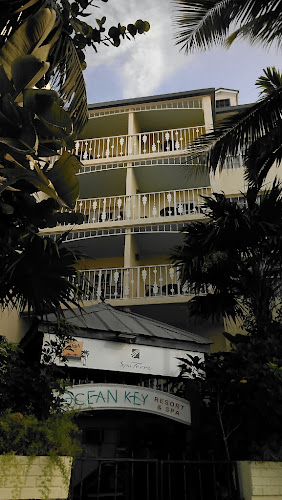 Too feckless for families? Really? Tell that to Disney who bring families to Key West on their cruise ships...the idea that Key West is unsuitable for the milquetoast cruisers seems absurd, not least because city leaders had been pushing hard for channel widening for even bigger ships, at the urging of the corporations that see Key West as a desirable destination! Cruise ships don't pile up in edgy destinations, folks! Behind the ship you can see Sunset Key, home to the likes of O'Reilly and his ilk, far from the worries of daily Key West "lawlessness." 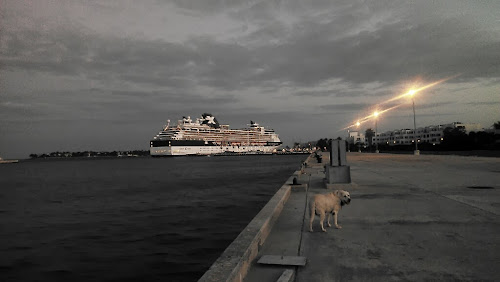 The other thing is everyone has to claim a piece of Key West. "I've been visiting since 1971," says the idiot presenter proudly, and one is supposed to wonder how he gets out alive every time. Yet they chose not to interview the bums that sit in Mallory Square and read books! Hey we have a better class of bum too! I'll bet some one on the streets of Key West, outside of myself, understands corporate tax fraud as clearly as food stamp fraud. You just have to want to make that point. Which is why I don't actually have TV service at my home. I have better things to do than be indoctrinated by advertising, thanks. So let's see, I live in Key West, I have a tattoo, I drink alcohol, I don't have a suit or tie, I don't have cable, I ride a scooter, and I don't like living on the mainland. Shit, I guess I fit the stereotype? 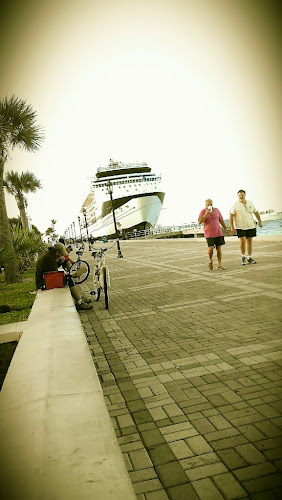 It's boring but true, Key West operates thanks to people like me who show up everyday day at work just like "normal" people on the mainland. I have bank accounts and bills, health insurance and a pension plan, and the last time I checked I wasn't wanted anywhere in these United States. Which is not to say there isn't something different and special about Key West. For those of us who have a hard time masking our eccentricities Key West is an emotional refuge, a place where people don't necessarily feel the need to point out you are weird but they learn to deal with you. This is a town where men on stage dressed in tutus entertain and are celebrated for their peculiar talent. Someone like me oblivious and uninterested in being fashionable or blending in doesn't make any kind of a ripple. My neighbors let me wander with my dog taking pictures like a tourist and talking to myself while I go, unseen. It is a relief compared to life in the mainstream where my accent draws attention to me, my scooter draws attention to me and my choice of clothing draws attention to me, usually negative. Here I find my own private liberation and I like it very much. 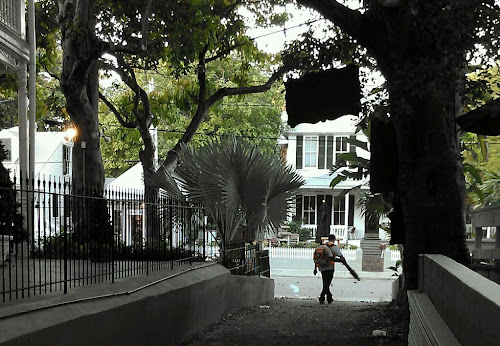 City Commissioner Rossi a man who owns the Rick's complex on Duval and who ought by rights to be as rich as Croesus as a result of selling so much alcohol to so many inebriates has publicly lamented the passing of the time when Key West was a backwater and filled with "characters." It's hard to maintain characters in town when the cost of living is jacked out of sight by people who have made a fortune on that fact and who feel powerless to create a more appealing city from the results. The Studios At Key West does more for this town than most, pulling in artists and writers and creating a small universe of thought in a town dedicated to the worship of Bacchus. But even for them it's like pulling teeth to get financial support from the big wigs.

In Key West some people walk to work, but work they do, just like anyplace else, and worries about bums or art take second place, to remembering to pack your lunch (eating out daily is for visitors): 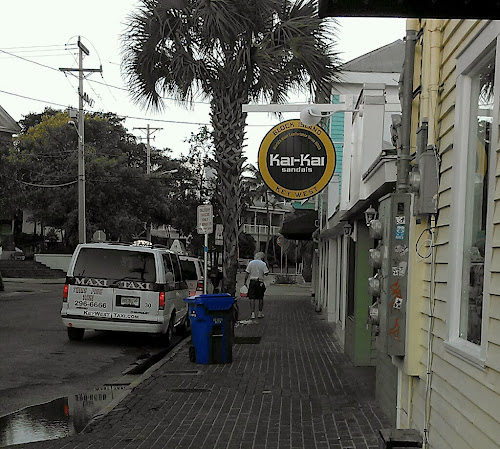 The other question that comes up is why do we vote for Mosquito Control? There has been talk of folding it into county government, that was popular when the district was spending money rather wildly and pissing off more than one taxpayer. However I suppose there are places in this country where Mosquito Control is an alien concept but around here the "Bug Board" gets a lot more attention than you might expect. It's a response to a need in a town where the climate never freezes and where people used to die by the thousand from yellow fever a hundred years ago. Key West unlike many towns in America, has at its core a phalanx of residents born and bred in this town, who give it it's true identity and it's ability to persevere as a community. The Conchs, as much as they may be derided as inbred Bubbas, are actually the people who provide the solid foundation upon which the flighty incomers come and go and pretend to belong. If you took the Conchs away from Key West not only would daily functions fall apart, what was left would look like St Pete Beach. A nice beach town but nothing memorable. 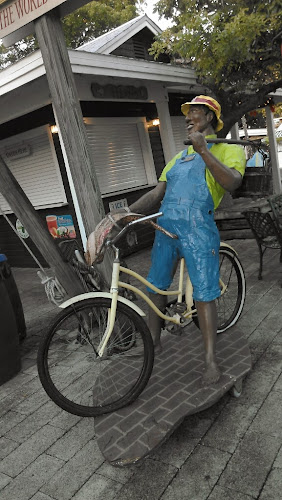 Key West is pretty, and some people are colorful, quite a few are boring and some like to tell everyone else what to do, which are the group that irritate me the most. As the years pass I fear the live and let live ideals of fifty years ago will be diluted to extinction, and then no one will even bother to do silly interviews about a silly little no account place at the end of the road. 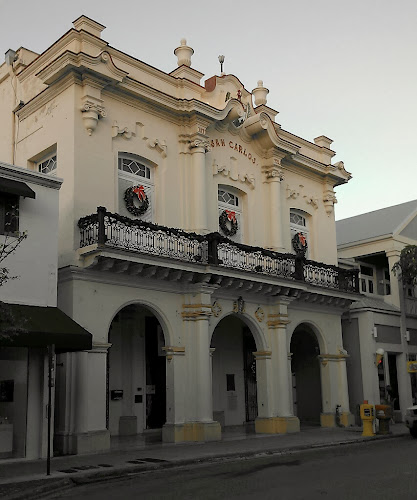 And yes, there is phone service, high speed internet, daily mail and parcel delivery, potable water from a pipe, reliable electricity (mostly) and milder weather than most of the rest of the country seems to enjoy year round. You can fly here, drive here or come by ferry. We pay taxes and vote and there are more churches than you can shake a stick at along with a couple of synagogues and a mosque. We answer 911 calls twenty four hours a day and we do have police, fire, ambulance and a hospital to take care of you. The fishing's not bad either, I'm told, and children are welcome. Don't believe what you see on television.