Clearly a well thought out policy position for the new millennium, and I wondered if this might be the format for post-modern pamphleteering, like the publishing made famous by Paine the voice of the Revolutionary War?

I like the idea of everyone lighting up and smoking away the national debt and modern strife. Damn, what if it really were that simple?


- Posted using BlogPress from my iPad
Posted by Conchscooter at 8:00 PM No comments:

The words have been written and the decision taken and change is coming to the 500 block of Duval.

I on the other hand have no idea what he should have done differently if anything as I have no head for business. What is clear to me is that everyone in Key West has a thought and an opinion about the end of the quirky department store that is now sinking out of sight into our collective memory.

Tony Falcone and his business and life partner at the time helped initiate Fantasy Fest three decades ago in a desperate attempt to give life to a moribund city in October when tourists were long gone and snowbirds were nowhere to be seen. His roots in the city go deep enough that he, like the big developers, oversaw the transformation of the city, it's modernization.

Lime all transformations the risk here is that Key West may be going too far, success brings with it deep seated and permanent alterations that change the essential nature of that which is being modernized. No one wants to live in a commercial fishing town, not many people want to life without modern conveniences, but by creating a year round economy and sucking in wealth, Key West has changed and changed so much that one of the authors of that change has changed himself out of his own business.

Fast Buck Freddie's walked a fine line between bad taste and fashion statements. It was homo-erotic home furnishings made palatable to the wealthy old snowbirds eager to prove their social advancement by showing off their wealth through fruity over priced furniture from the home town store. There was not much room for working Conchs and retail employees with three part-time jobs and barely enough money left over for a six pack.

It was a walk through retail fantasyland when one went to the store with a meager budget and an intent to buy a few seasonal knick knacks for gifts. The store was bursting with dust catcher fantasies, over wrought china, exotic Indonesian rattan, penis pasta and joke books.

I remember the Lee County Commissioner who returned to Ft Myers and handed out boxes of penis pasta to her fellow elected officials on the daïs. I think she lost her job thanks to her terrible Key West taste.

I had a job at Fast Buck's for a summer in the shipping and receiving department. It was a happy time for me, I was off the water tired of being a boat captain and enjoying driving round the city delivering furniture. I went into lots of different homes, an invisible worker on Sunset Key driving a truck where no one drives. I liked working there and wanted to stay. It was John that hired me, a veteran of the early years of the store, recently retired, shortly after I took this picture of him opening the store as he had for 30 years: 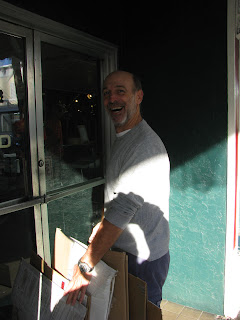 And after retirement with his house sold I am told he retreated to Costa Rica.

I remember this little mannequin which was sold in front of me to a grinning new owner. We the employees used to look at the child's horrid scowl and with the best will in the world the dressers despaired of ever making the child look appealing in the store window. Check him out, he looks positively demonic.

Eventually I was offered a job as a police dispatcher making a few dollars an hour more, and I tried to negotiate a raise at Fast Buck's but the private sector failed to see my worth. I went to the police department and now more than ever I am glad of that choice.

I will miss the place as we all will, and when a chain store that offers no challenges and presents a bland familiar shopping mall face to Duval Street opens in it's place we will mutter about the good old days.

When I was shipping furniture out the back the Blue Paper published from the little shack at the top of the stairs. I once met Jimmy Buffet back here, he shares the building with Falcone and often hung around here. I had no idea who he was and only discovered his identity when the trembling women in the store pointed him out with awe in their voices. I saw first hand what wealth and fame and a reputation do to the rest of us.

It wasn't all good, I suppose, but that's the beauty of nostalgia, and it's curse

Everything looks better in retrospect.

- Posted using BlogPress from my iPad
Posted by Conchscooter at 12:01 AM 6 comments: