Drama In a Tea Cup- Surfboards, Sex Changes and Trolls 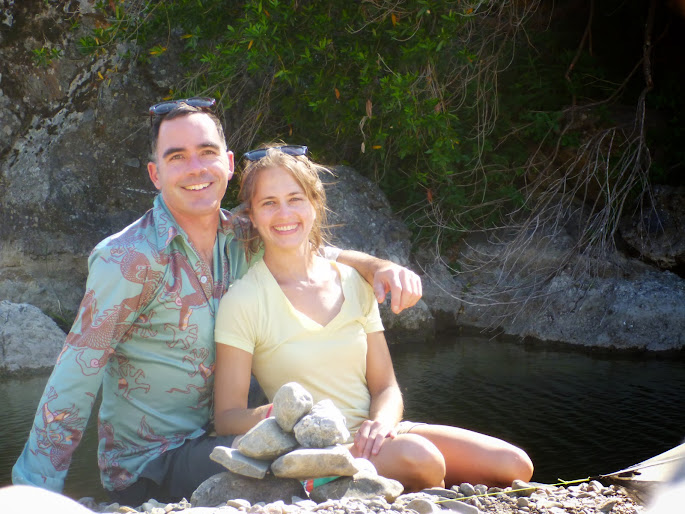 It has been brought to my attention in no uncertain terms that my sense of humor is deficient. Under ordinary circumstances one might make such a discovery and find oneself crushed by the understanding that one has no sense of humor. It's an odd thing but being told you are humorless is about as bad as being told you can't  drive. I am not sure why people get defensive about these things but, by golly they do.  After all if you are not very good at driving you can take classes; not that anyone does mind, but you can learn to do better behind the wheel. But for the humor impaired how do you increase your sense of what's funny? 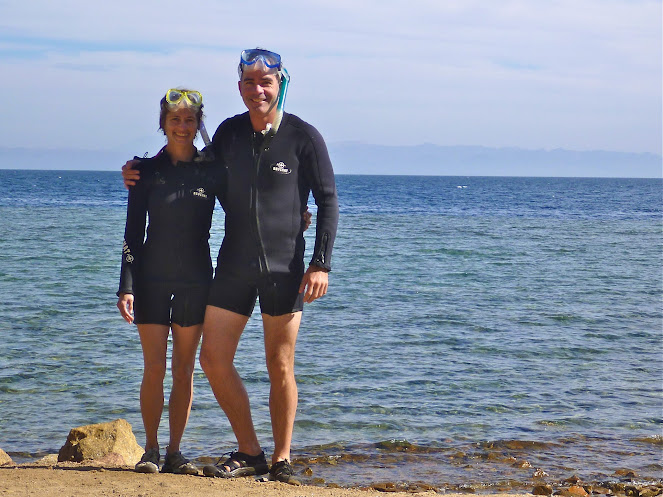 All this pondering came about in my mind recently when I discovered I had been spanked completely and thoroughly by a total stranger online, and what's worse I was blissfully unaware of my unwitting role in her online bondage scenario. I had been following the adventure couple you see in the pictures above, a motorcycle traveler who calls himself Garnaro who took his motorcycle from Santa Cruz, California my former hometown. to Europe by air, and from there rode to Africa- with a surfboard. No seriously: 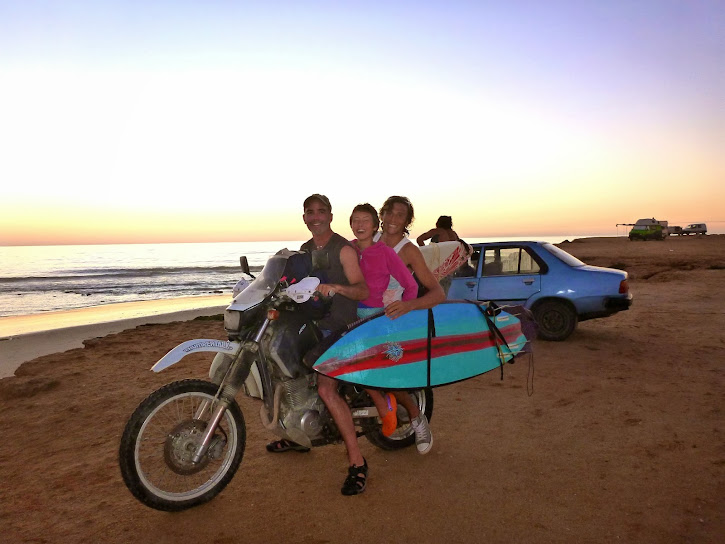 Later Garnaro was joined by his girlfriend Jamie, crazy brave woman, and together they rode across the remainder of the continent from South Africa to Egypt. It is a travelogue in the finest tradition, full of self deprecating humor, stories of bravery born of desperation, friendship on the road and all the usual overcoming adversity, gorgeously illustrated. I highly recommend starting at the beginning and following Garnaro from Santa Cruz to Turkey: that's the story so far: Horizons Unlimted: Garnaro. 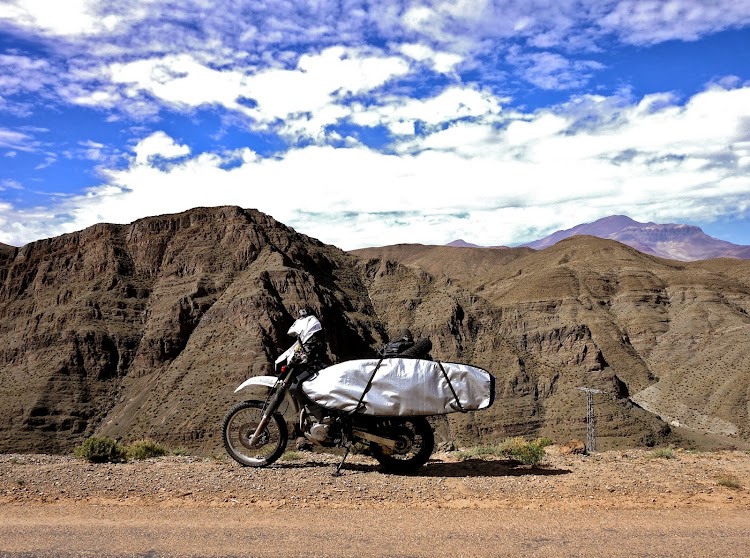 You can imagine for a traveler like myself having access to this story while propping up a desk is sheer delight and it is a great way to spend a few minutes between 911 calls getting out of your head and transporting yourself somewhere far removed to read about someone ably fixing his the problems of his own making. No 911 where Garnaro is riding, and falling off. 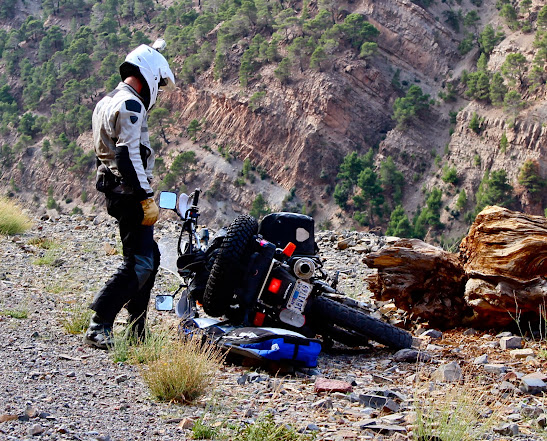 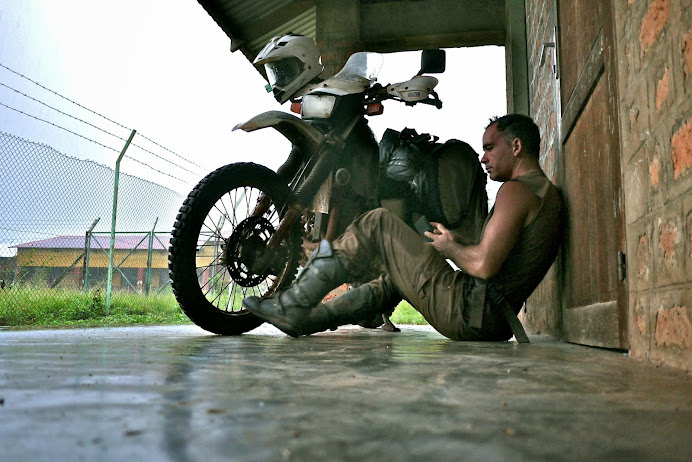 Anyway there are ten pages of great travel writing and photography and you have to read it for yourself. I dropped in the odd comment and when Garnaro announced he was getting ready to leave Africa (his surfboard was replaced as mentioned by a human companion) I made in this comment:

The reference to "a retinue of women" came from an earlier comment I had made when his girlfriend showed up earlier in the thread:

By making a little joke about not being in Africa and not having a surfboard I was, in a silly way I suppose, congratulating him on achieving his first goal, riding a simple Suzuki 650 single cylinder motorcycle all the way around Africa, surfing a good deal of the way. I was impressed but saying something as bland as "good job" did not seem to do this story justice. So I made a little joke about riding far beyond his original goal. I should never have done! 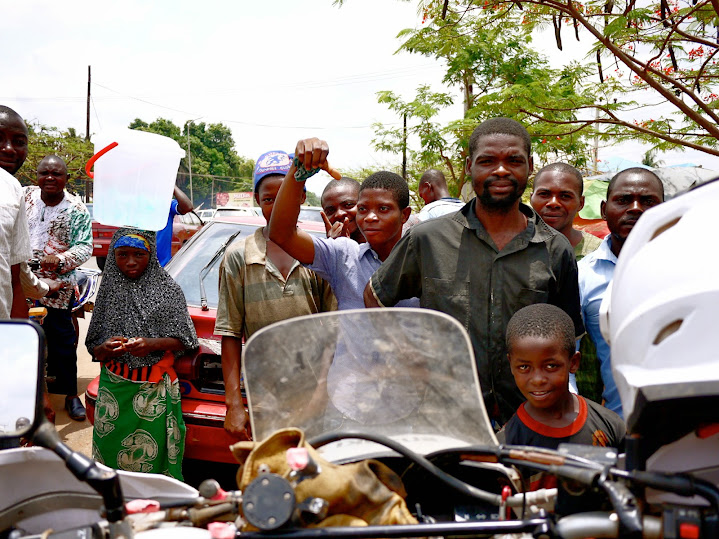 After I posted my joking comment some seriously humor impaired insecure person savaged my comment! I actually thought it was quite funny being attacked for being an Internet Troll as I am the least likely user to hide behind anonymity. Check it out, I think Garnaro got my point as you can see:
Plus I am now unofficially "ms Concha" which leads me to suspect that mollydog has no knowledge of what a konk is, and likely doesn't care. But I am real, though not an actual Conch (conchscooter was given to me as an avatar on a motorcycle forum years ago) and suggesting I be banned from a forum for that one small comment makes you think about the kind of people with whom we are required to share the planet and the Web. People are great, life is good. But I do wish I could turn away from the miseries of 911 and real life and find myself in a make believe world of people who don't have to take offense at every small little thing that causes them rage. Some of us just want to get along, at least we do on some parts of the web.

I apologize for causing offense but my lighthearted comment was intended for the author of this travelogue whose exploits I have been following from the beginning (you might want to check my previous comments) not least because I spent twenty years in Santa Cruz myself (I was not born in Half Moon Bay but I did sail there overnight a few times and enjoyed the fog). I believe Gary took my back handed congratulations on his achievement in the spirit it was intended. Erm...I am a man (though my man card is revoked as I enjoy riding a vintage Vespa in my home Key West) and my wife of twenty years is a woman who grew up in Palo Alto and also lived in Santa Cruz. Neither of us surfed.I answer 911 calls for a living in Key West overnight and I greatly enjoy the pictures and humor of this story. A dry sense of humor in between 911 calls is a pleasure. Thanks for suggesting I be banned; i have never had the honor previously on any forum. cheersMichael.

Back to regular- surfboard free- programming.

So far mollydog has not apologized for her rudeness and presumption and that's too bad. 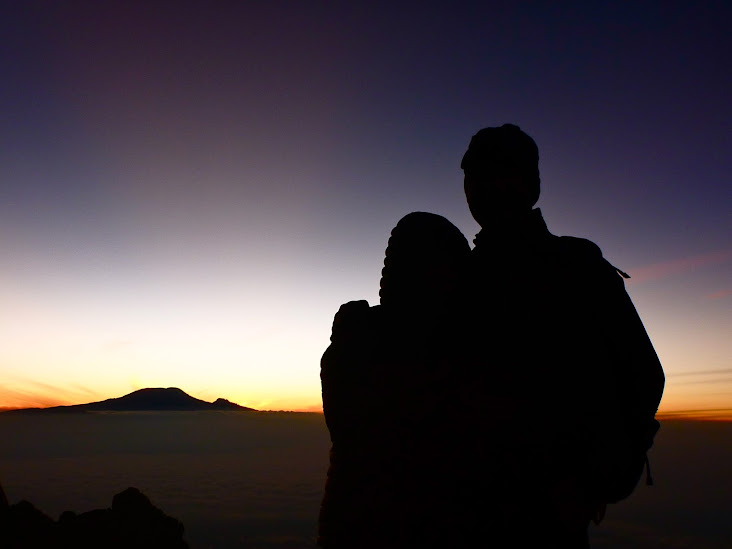