I keep circling the Pez Garden when I am down by Mallory Square wondering if I could ever undertake to photograph the three dozen heads parked in there. I keep coming to the conclusion that would be boring so I am toying with some crazy idea about incorporating pictures of the heads with their related bits of historic Key West. Sounds like work so don't hold me to it. 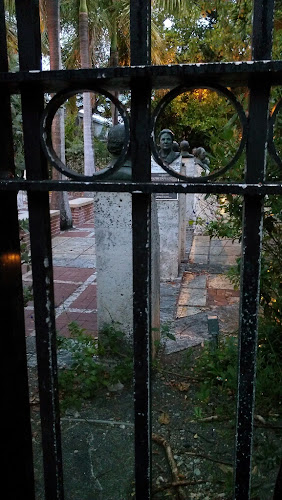 Trash has been a hot topic lately. The city cut pick up this year to once weekly instead of twice. Half the city had a coronary on the spot arguing loudly that weekly pick up would leave piles of rotting garbage on the streets and in people's yards... and as loudly as the other lot argued that never happened the battle lines are drawn. Most recently a majority of the City Commission voted to reverse the \once a week pick up and return to twice a week. That decision gave the other side an instant coronary as they said the once a week pick up encouraged city resident to recycle and the city's recycling rate tripled from seven percent of the waste stream to 21%. Not that anyone in charge cares. 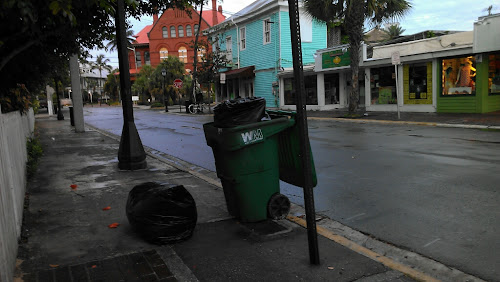 I titled this essay about work because if you go out early enough you will see people doing the stage management that makes the tourist experience possible. Cardboard boxes litter Duval Street and its offshoots before eight in the morning. Here seen on Caroline Street: 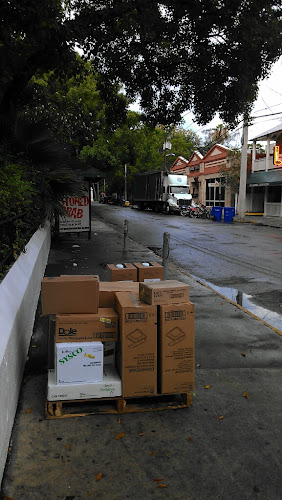 The amount of stuff packed into recyclable cardboard boxes boggles the mind. cardboard I do see flattened and packaged for reuse. 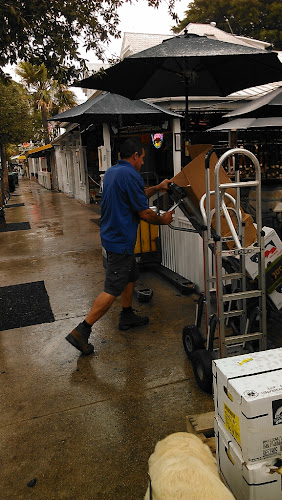 Cheyenne finds them fascinating these packages lined up for busy fausto's workers on Fleming Street: 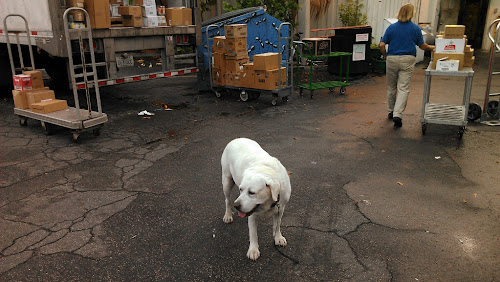 Key West is among the most expensive Florida cities, especially when you measure average income as a ratio of real estate costs. To come to key West and "get a job" is not a solution to your living needs. Most people have two or three jobs. I get decent city medical benefits and a defined benefit pension plan, the city is solvent as is the state of Florida miraculously, unlike states Up North, but most workers around here get neither. I also get overtime and unlike Walmart, the city pays me handsomely for my extra work. Thank you Key West. 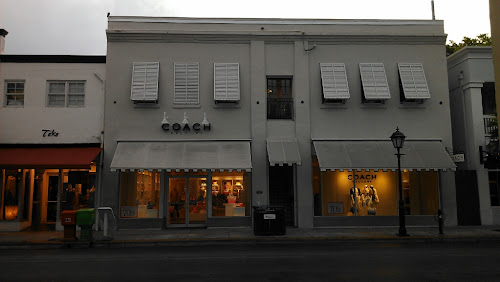 It's not uncommon to hold down two or three positions, almost full time, maybe full time, maybe not. It must be hell hiring help in Key West. Young people come for the fun and working doesn't necessarily compute, so flaking is  common. One way to keep a job and even get promoted is to simply show up. I have heard legions of stories of reliable people showing up for their second shift and getting the Keys with brief instructions to open the store in the morning. It sounds cute but remember you are going to be working with these people. Can you handle it? 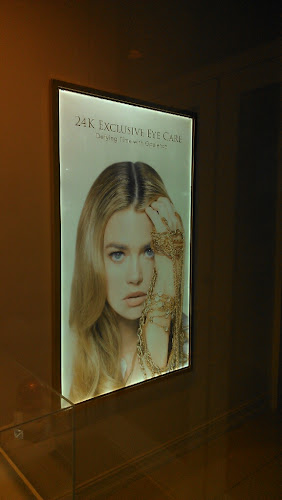 The advertising slogans make me laugh "youth through opulence" sounds like a slogan for someone other than I want to hang out with. "Tap All Potential" is a rather banal real estate page ( I had hoped for some type of extravagant mystical self improvement nonsense). On the other hand if you choose to live in Key West you get a lot for your money...check this blurb out:
Discover a city where real estate titles date back to the Kings of Spain.Stroll the palm-lined streets and discover gingerbread mansions, tin-roofed conch houses, the John Audubon House and Ernest Hemingway's home.Walk in the footsteps of Thomas Edison, Lou Gehrig, Harry Truman, and Tennessee Williams.
And Kenny Chesney the singer gets amention for his three minute residence on Caroline Street as I recall. 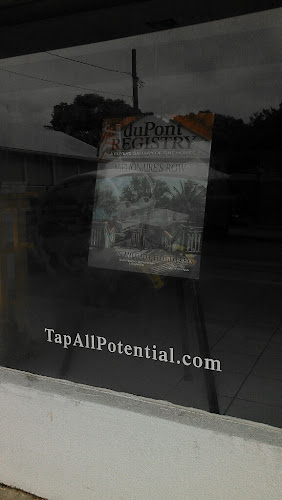 You may walk in the footsteps of giants of art and culture but you end up in a small town  with a lot of garbage cans. And remember every bottle of beer wine and liquor  you drain in Key west does not get recycled: it goes into the Pompano beach landfill two hundred miles north of here. Bars and restaurants do not recycle as a general rule, thougha  few stalwarts do break with tradition and collect glass. And if you want a  job check out the drug store at the old Strand Theater. They seem to be hiring! 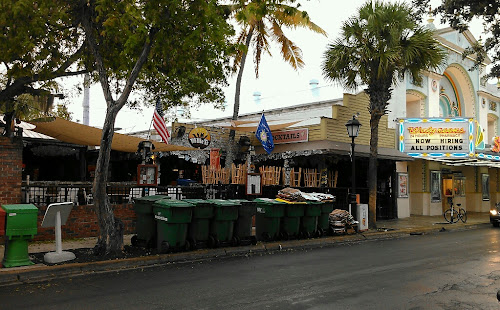 Jimmy Buffett's story of  how he got his start in Key West is a Walter Mitty dream, yet it was a True Story! There are times and places and people willing to grab the chance and Key West has been that place over the centuries. In talking with one dedicated Parrothead I understand that Jimmy Buffett started the whole thing but the gatherings and fund raising and relatively innocent fun at casa marina every year carry on more despite him than because of him these days. I have  no strong feelings one way or the other, except that I prefer reality to day dreams. Mostly. 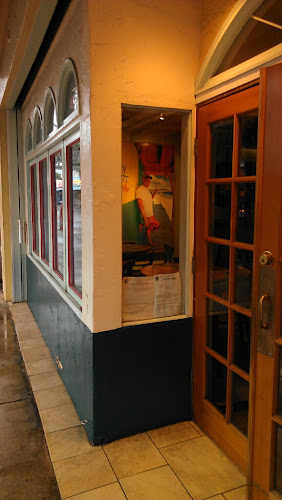 See? I told you they recycle cardboard! The green cans with the yellow lids are the old recycling containers and were replaced by the blue ones on the grounds that a lot of people thought the green and yellow ones were ugly, and thus a deterrent to recycling. I continue to be astonished by what matters to my neighbors on this small vulnerable planet. 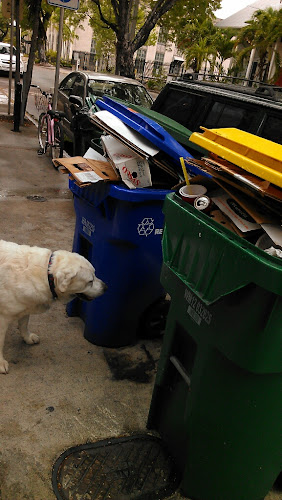 Watching the garbage truck maneuvering on Rose Lane between Duval and Simonton I was reminded of my years driving trucks in San Francisco. Just as narrow but also steep with cable cars and bicycle messengers mixed in. Those were exciting and exhausting times in my life until my wife agreed to take off sailing. Then things got really exciting.
I 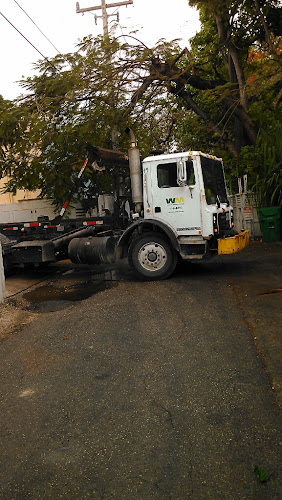 I watched the early risers wander through the debris of the night before with eyes only for each other and stood in front of the Bull apparently planning the next night out. I hope they tip generously as Florida has some truly antiquated laws about employee compensation and tipping. I think its $3:02 and I'll bet no one offers to pay them more. Mind you the work must pay because people line up to do it. 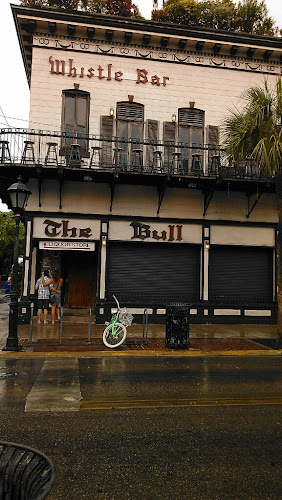 Remember that job at the pharmacy? A two bedroom apartment in a converted Victorian on Simonton Street for $1900. Hope you don't have a car or need parking and make a little extra for utilities. The balance between work and cost of living is somewhat skewed. 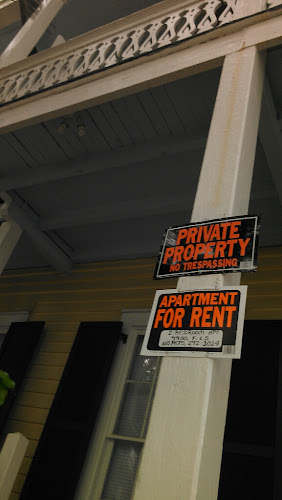 And don't forget when you live here it isn't all fun and games; there are rules. 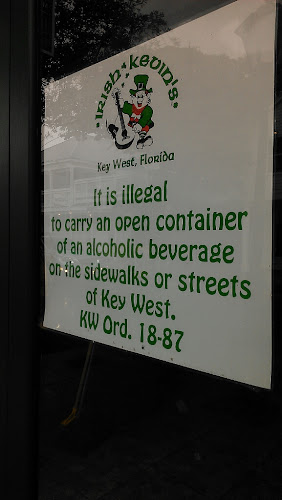 And there are mysteries. there is a candy store and in it there are frozen bracelets which sound uncomfortable at best and kinky at worst. 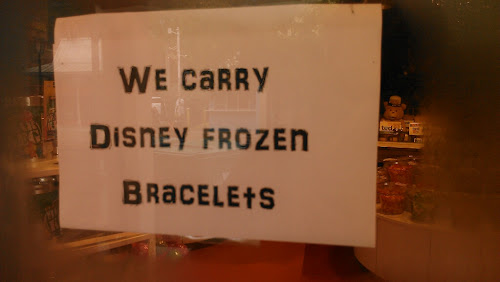 And then there are cruise ships. Whether they bring work or pollution or both or whatever I don't know. But they come and keep coming. 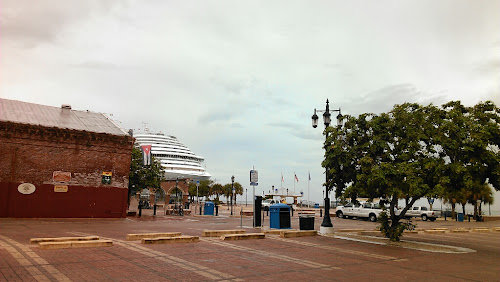 Maybe you could get a job tying up cruise ships? No wait a minute, Curt does that and also sells conch fritters and lives on a boat anchored far out in the harbor. Two jobs and no hot running water. That's life in Key West.