I made the mistake of stopping to talk to a dude yesterday as Cheyenne and I strolled the suburbs, she sniffing and me enjoying the temperate summer day cooled by a post-cold-front breeze. I have walked past that particular Big Pine home a lot and admired the bizarre collection of Fiats parked at random in the gravel space in front of the house. This time as I walked by an erect rather distinguished man with white hair, big tortoiseshell glasses and a green t shirt appeared from behind a modern bright red Fiat 500 and I stopped. "I have admired your wild collection of Fiats,"  I said rather incautiously. 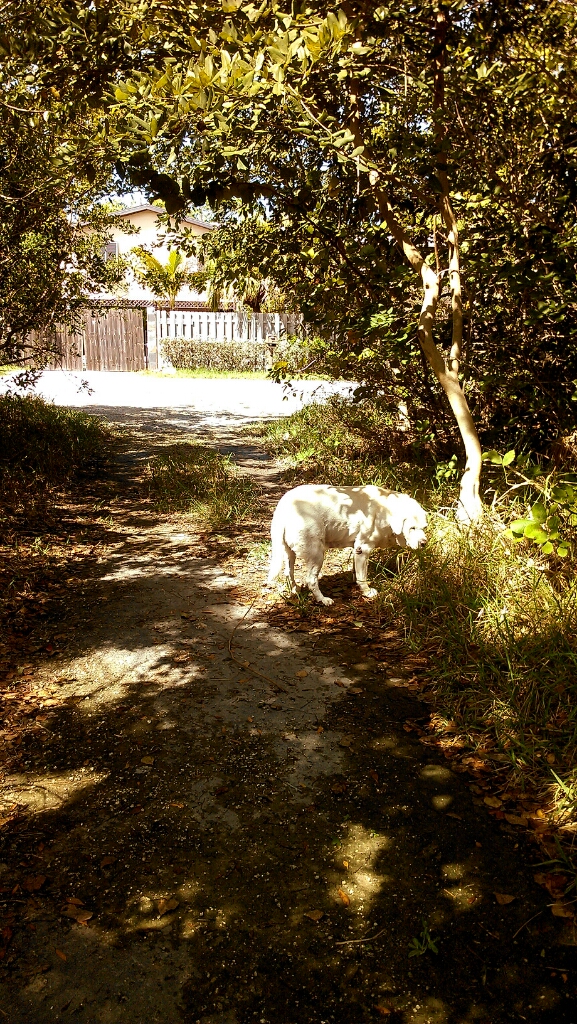 It happens I am not very good at being social and the company of my patient dog is usually enough for me, especially when combined with the occasional encounter with a friend and altogether too much work and overtime during Spring Break. Twelve hours sitting in a  room  with two other overworked 911 dispatchers can tax the limits of my ability to be anything but morose and withdrawn. One would like to imagine that a brief encounter, a chat about a funky brand of car might help recharge the internal battery of a recluse and reaffirm the value of human interaction...The problem though was quite a different one. I am not a car enthusiast, though I like motorcycles and enjoy riding them and reading about them. They are my passion and I do not discuss them with anyone much in the real world though I do struggle on a few forums on the Internet where I find opinions abound and are frequently passed off as fact. Cars? Useful but not exactly exciting. My interest in Fiats stemmed more from the fact that there is a dude living in Big Pine who collects them. How weird is that? Big Pine Key is the Lower Keys refuge for people who want to enjoy their guns and their paranoia in peace not to be sitting around collecting cars that in no way resemble giant pick up trucks...That was what interested me, not a thirty minute disquisition on double barreled carbs, twin headlights and 1972  gray imports of Fiat 850s. But, by gum, that's what I got. My mother drove a car like this one below, a Fiat 850 coupe of which my interlocutor had had one parked in front of his house.
﻿ 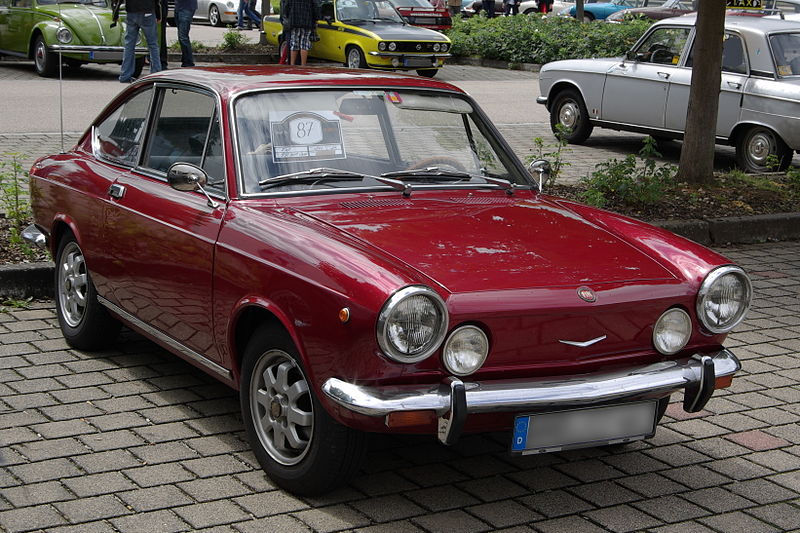 That one was off being  restored he said and then he proceeded to uncover a black convertible and he lifted the hood and I got to see a new collection of pipes and wires powering his 124 Convertible. That was a car I remembered from my childhood. My father bought my twin sisters the car and they drove it all over Europe, to England and Italy, Germany and Austria and across France and Switzerland. It was an unhappy time for them as they tried to convince my mother their lives should be lived in Italy but they kept pissing her off in her Italian castle and she'd send them back to her ex-husband in England. I took quite a few trips in the rumble seat of my much older sisters' fancy car. You can imagine the attention twin good looking twenty one year olds in a convertible got in the 1960s. I was eleven and wondered about the fuss we got at every border post. ﻿ 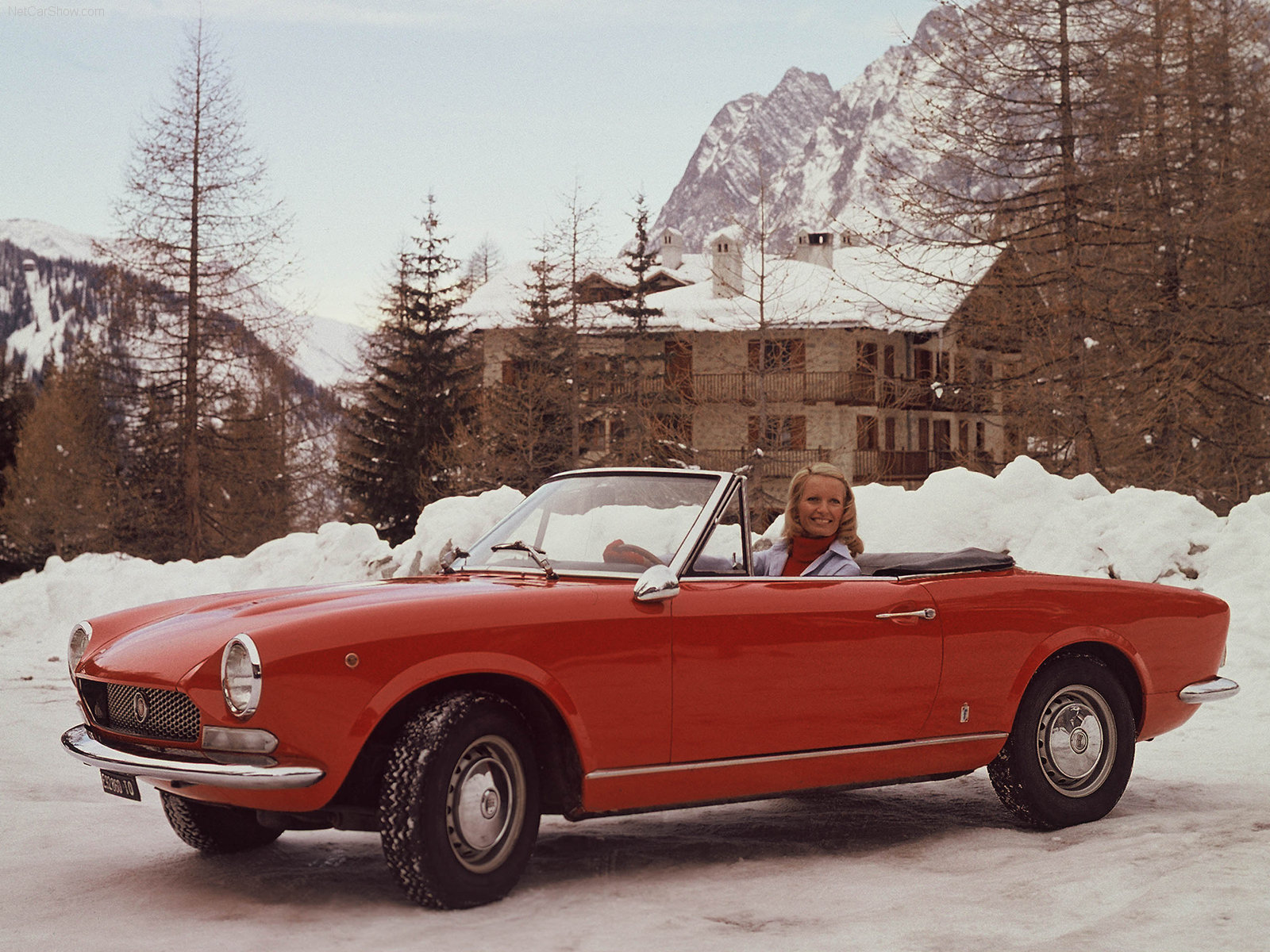 Where was I? Oh yes, it seems not many 850s were imported to the US and the Fiat crazy guy on Big Pine got his, the one with the dual headlights direct from Italy with a speedometer in kilometers and he only paid forty five hundred bucks for it. Which made me wince as my 1977 Vespa is going to cost more than  that by the time all's said and done, maybe six grand. At least his fancy 850 still has to be restored though he says it may be worth seventy grand by that time. My Vespa may be worth three grand by the time I'm done, but my plan is to ride the snot out of the thing as usual  and destroy all resale value. I tried to ask how he got into Fiats and why but all I heard was he felt that these funky cars kept him alive through his recent cardiac problems. "More likely caused them," I said, trying to crack a funny in the middle of a lot of technical mumbo jumbo. Oh no he said, sincerity larding his voice lest his cars hear him deprecating them, they saved  my life he said, missing my little joke entirely. Sigh. 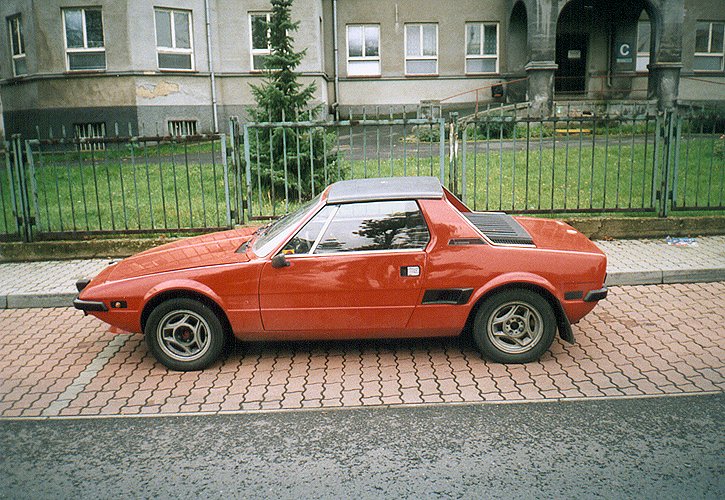 I never really thought about it too much until my mind started to wander from all the minutiae of owning collectible Fiats but I've actually been around quite a few of them. I bought my own when I was in my early twenties. I remember driving to the dealer in Perugia at the urging of a friend and there it was just like the car pictured above offered for 9 million lire I seem to recall, perhaps three thousand dollars back then? I wrote a check and took home ( a few  days later, Italian bureaucracy is generally quite slow but I think the dealer wanted to unload the weird car while he could so I got my tags in a hurry) my first  own car. People in the village thought I was joking when I showed up with this extraordinary space ship of a car, accustomed as they were to seeing me riding my motorcycle in all weathers. A Fiat they said incredulously, looking at their own utility Fiats by comparison. A convertible? With a hard roof? And the seats don't lean back? They looked appalled at the thought of spending nine million lire for a car you could not get laid in. That was okay; I had fifty empty rooms at my disposal in the castle my late mother had left to me. Space was not cramped for me in my lonely youth. 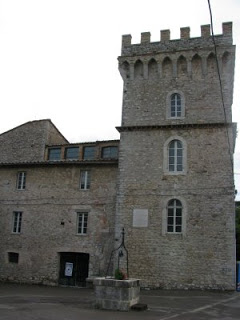 None of this was of interest to the Fiat dude. We had not exchanged names in the flood of technical details that I had been drowning in. Then I asked about the Internet, thinking that restoration is so much easier with the Web. I know it encouraged me to get my 1977 Vespa and helped me find what appears to be a top flight restorer in distant Pennsylvania. Fiat Dude looked appalled. Oh no, he recoiled, I don't have a computer. Never had in the twenty five years I've lived here. I call So-and-So in California for my parts. Oh I said, so he has the computer! I needn't have said anything because now Fiat Dude was in full flow about how the Internet interferes with human relations and how he believed in true human interactions and making the world a better place etc...and when he started to refer to his comparative religion class at the university I started to send signals to Cheyenne that this conversation needed to end. Now, please. Obediently my old Labrador picked up on my invisible distress signals and got up and started lumbering off.  I said I could never have had the courage to buy my Vespa without the Internet for help. Vespa car he asked hopefully? Oh God no I said thinking of the weird little Vespa 400 that makes an old Fiat 500 look large...
﻿ 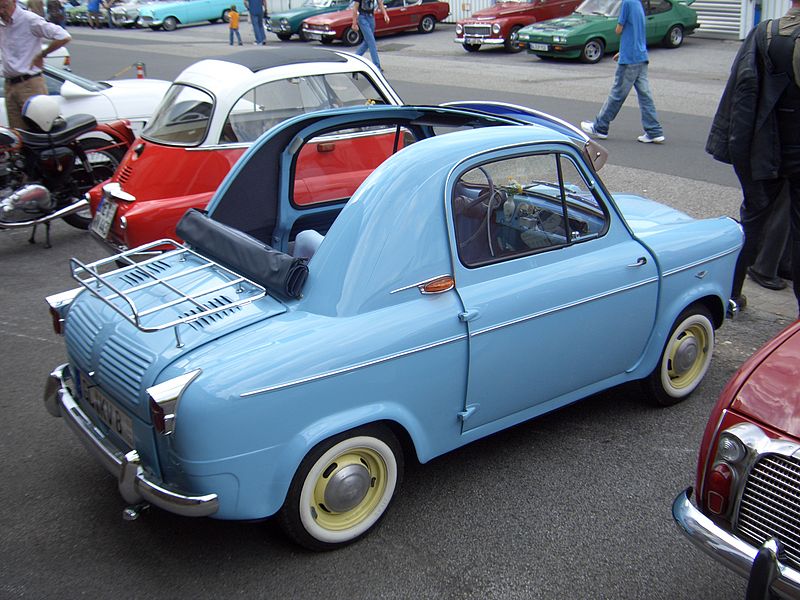 My mother would never let me have a motorcycle when I was growing up in Oklahoma Fiat Dude said. So much so she encouraged him to get a car, unlike my mother who encouraged me to get a motorcycle by buying me my first Vespa when I was 12. But what did he care, the lonely humanitarian too busy talking to listen? He got in his stick shift Fiat 500 Abarth and drove off toward Highway One as Cheyenne led me gently away my ears ringing. I had even tried to find common ground by pointing out how much I like my wife's convertible, seen below uncharacteristically not converted (though she can open the roof all the way while under way...), but Fiat Dude poured scorn on the automatic gearbox, because clearly ours is inferior to his manual shift. I wonder how high he scored in comparative religion class? 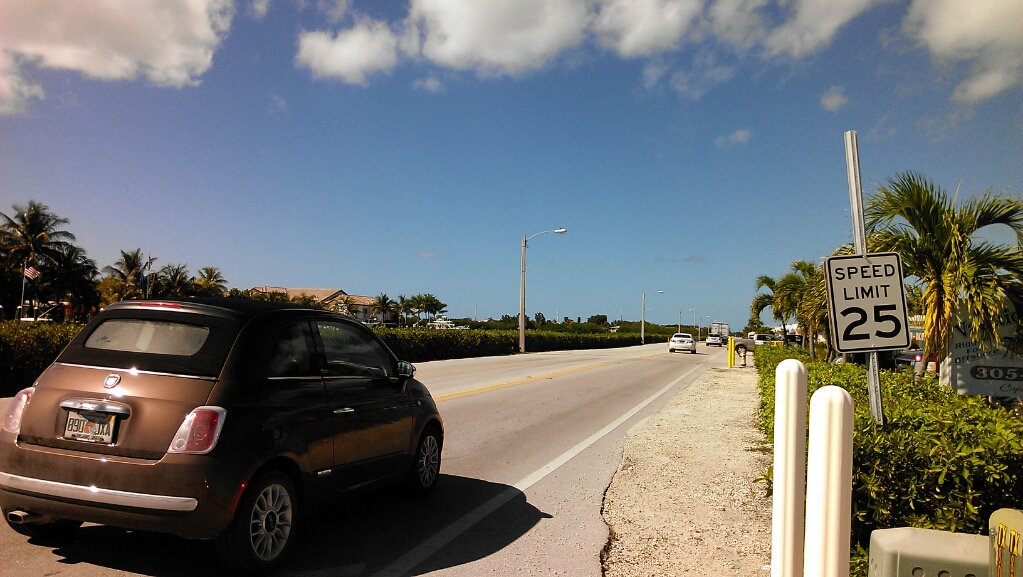 Maybe I'm just doing it wrong, but no matter how I slice it, I like Cheyenne's company best and she I am flattered to think likes mine. Besides all that imagine the total lack of curiosity that leaves you thinking that having access to the world around you, albeit only electronically, isn't something worth doing. Screw Facebook if you like , but all the world's literature, newspapers, films and music are on line available to you in Bumfuck Big Pine if you want it. I think this ability to explore the world from this or any other isolated spot is one of the great benefits of modern times. The Internet is a pain in the ass, and creates dependence and screws up youthful minds and all that but I love having the world at my fingertips. I can watch episodes of  Dad's Army or Don Matteo any time I want on U Tube and if I want to be intellectual  I can download all the world's books to my phone and I can send pictures to my nephews half a world away any time I want. Fantastic - and this dolt immersed in his rusty machinery thinks its all a waste of time. Dull is as dull does. 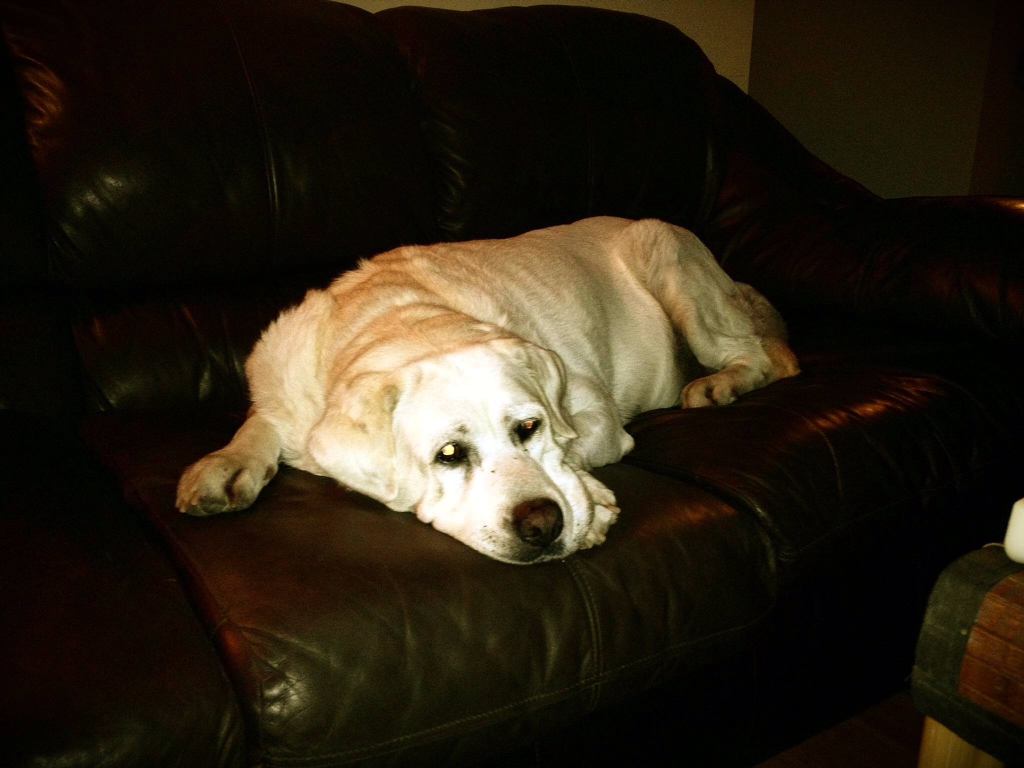 I suppose it's my Asperger's but I just don't get what the point of conversation is when you have a dog and a book and a warm sunny day. And I didn't have to take a class to learn that.
﻿
Posted by Conchscooter at 12:00 AM 7 comments: