The Zombie Bike Ride had its first appearance in 2009 and organizers say 70 people participated. By now it is arguably the most popular event at Fantasy Fest, and organizers suggest possibly 8,000 or more people take the "leisurely ride" into Old Town Key West. 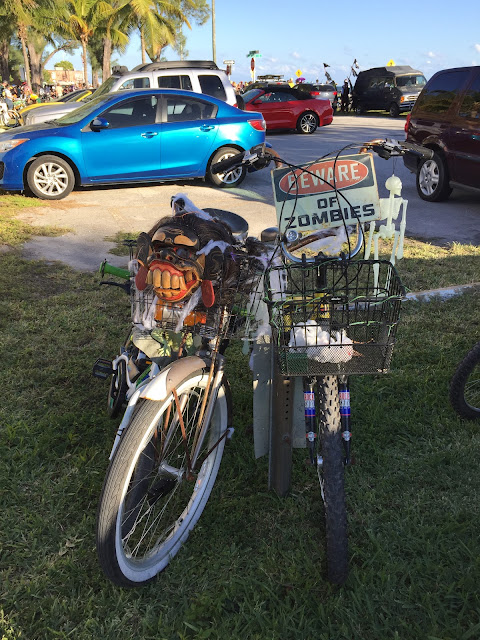 The event used to start on Stock Island at the bike shop called Recycle which invented the ride and still sponsors it. This year the start was moved to Pines Park and the East Martello Tower on South Roosevelt, shortening the "leisurely ride" and also avoiding a massive traffic snarl at the entrance to Key West. 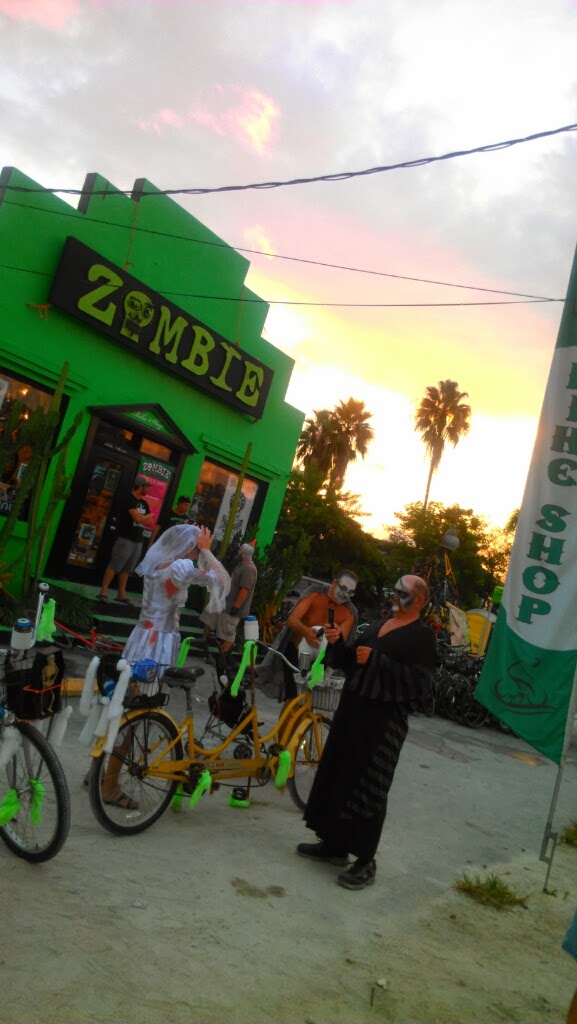 I made my way to the East Martello Tower area by approaching along South Roosevelt as traffic was a mess already in the other direction where the four lane street was closed.  Fred and Chelsea flagged me down so of course I took their picture: 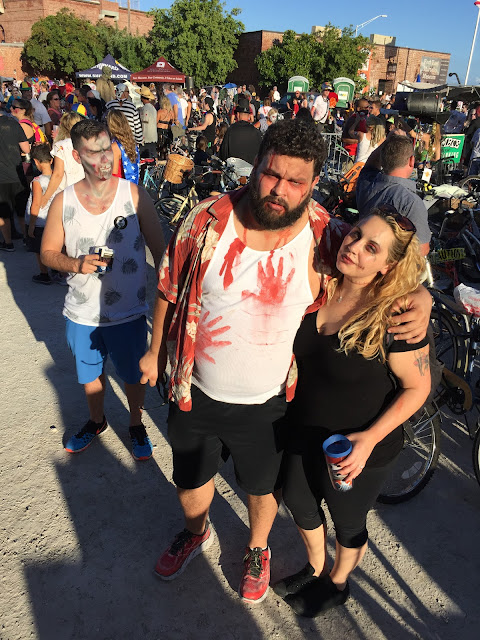 It was a huge crowd enjoying the sunshine and cool fresh north wind - perfect conditions for a slow intoxicated ride with 8,000 of your favorite living dead neighbors. 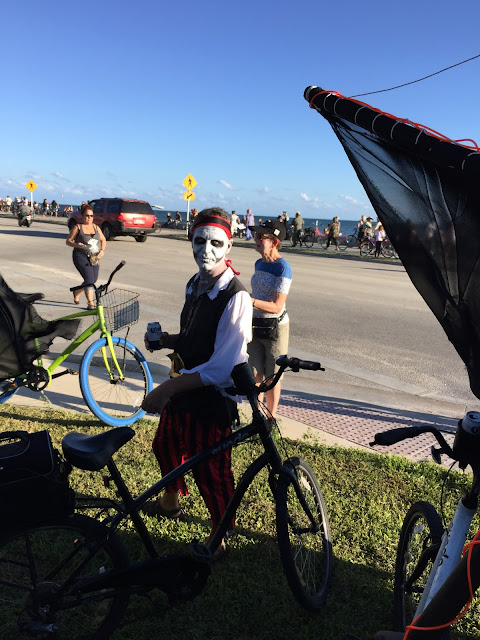 The great thing about the Zombie Bike Ride is that it really is family friendly in that it's about zombies and costumes not about nudity. And yes, people are drinking alcohol, not an activity normally associated with the term "family friendly" but this as peaceable a gathering of people as you can imagine. The Zombie Bike Ride is about being silly and having fun which makes it enormously appealing in a week that is usually considered to be adult only in Key West. 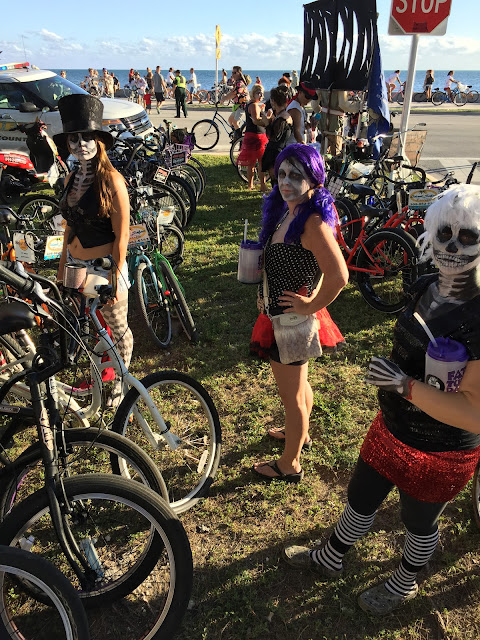 It was an almost Druidical gathering in the Pines Park on South Roosevelt, followers of some obscure cult of the bicycle, or blood, or torn clothing: 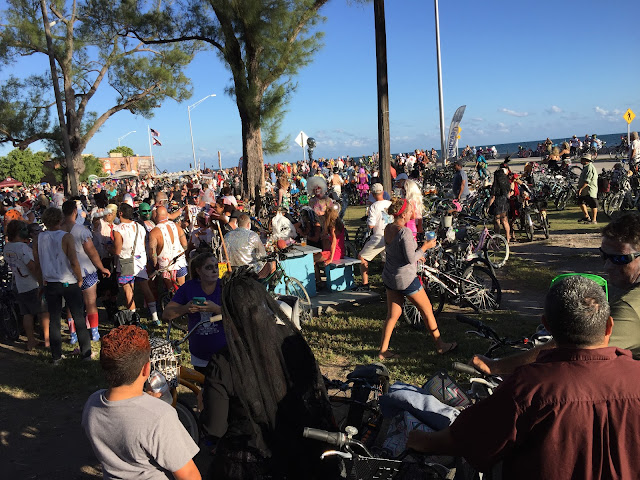 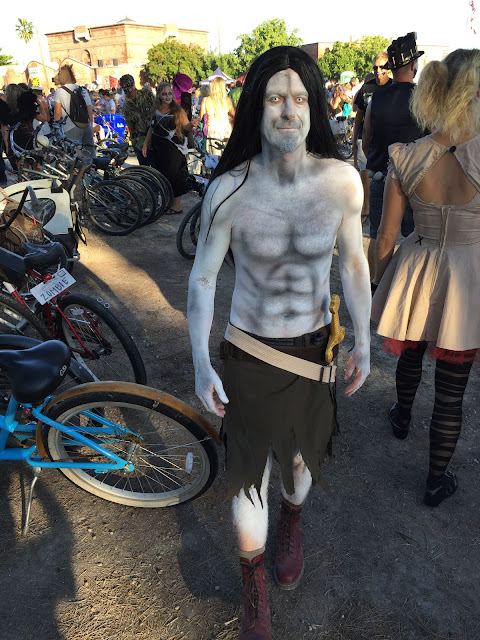 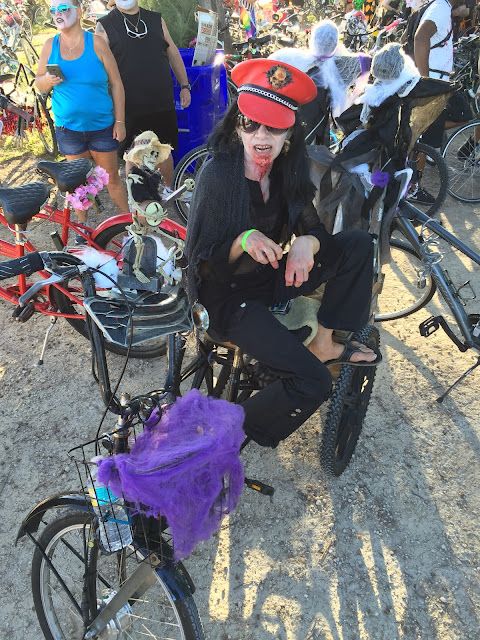 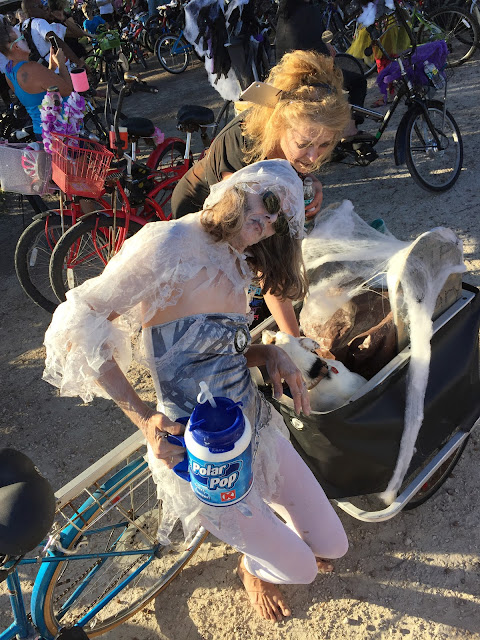 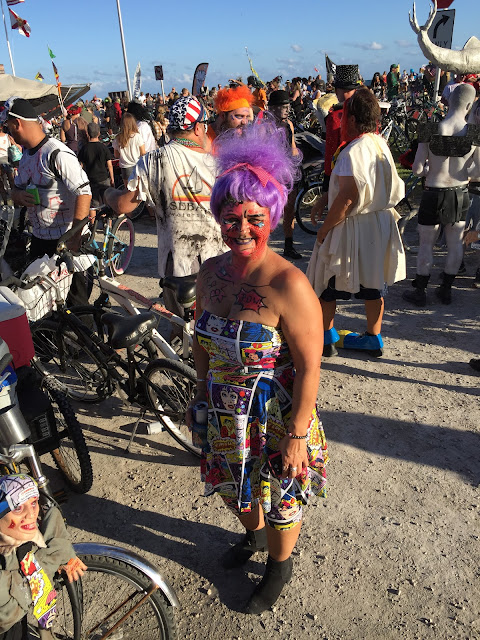 There was one political sign I noticed though the the owner of the sign chose to step out of the picture. 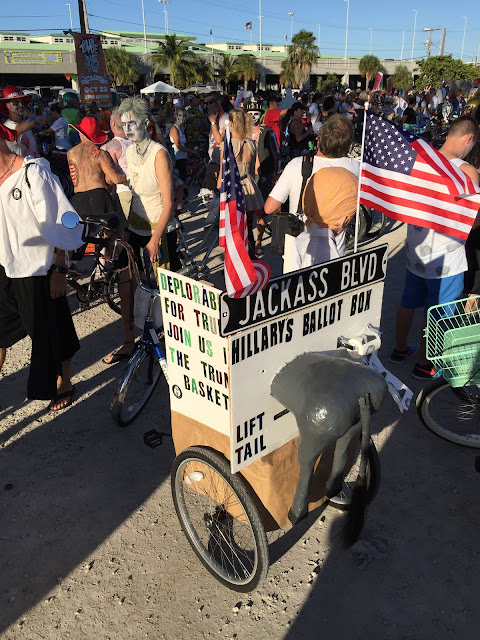 Some body paint got quite elaborate. 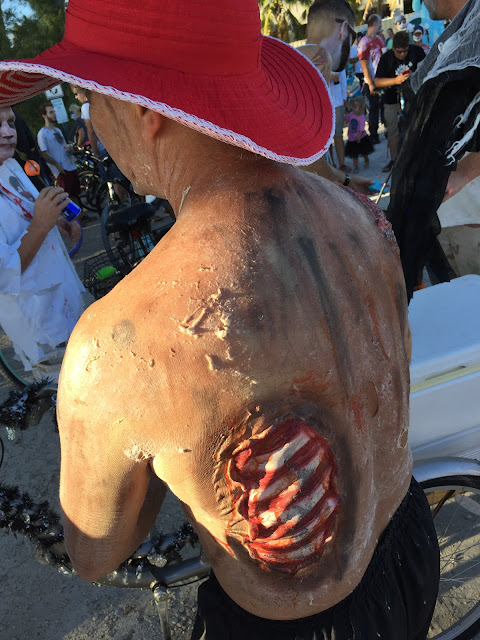 The mood is totally festive and fun. 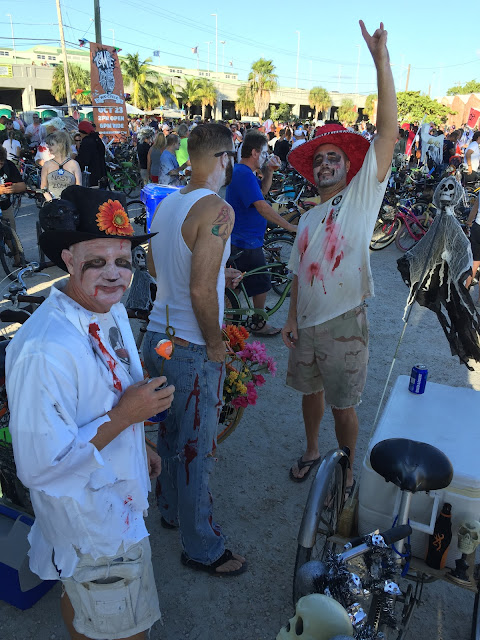 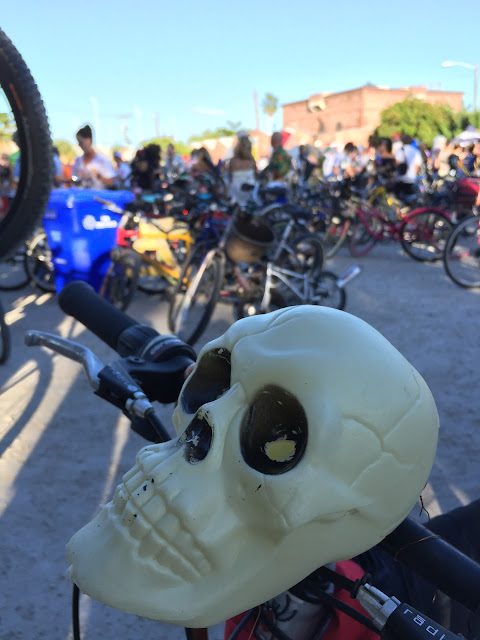 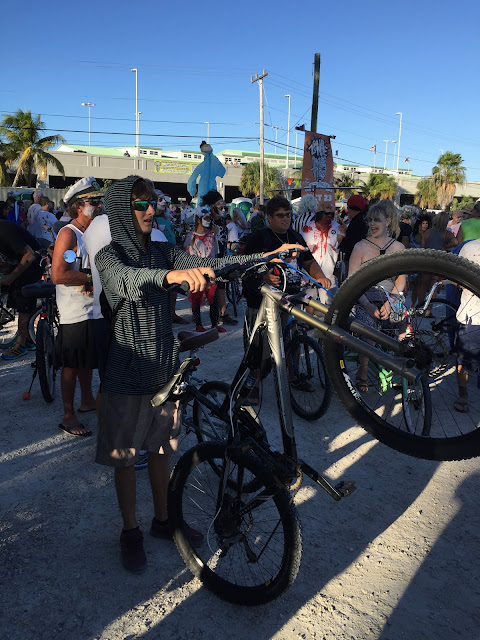 Costumes can be elaborate or not. I like silly animal heads: 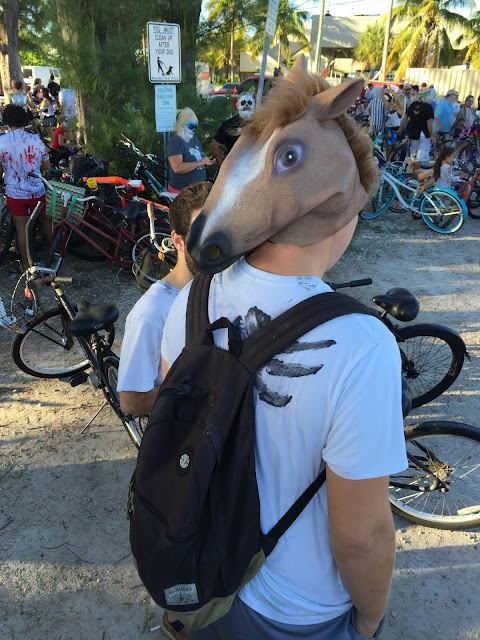 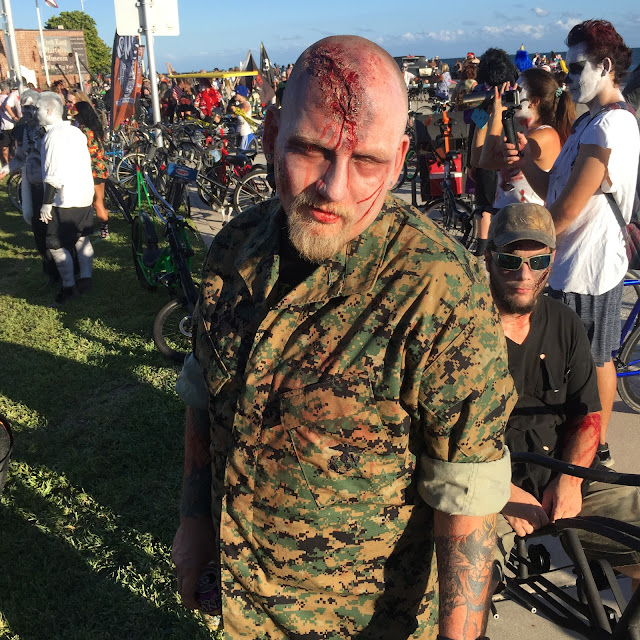 Some Zombies smile for the camera... 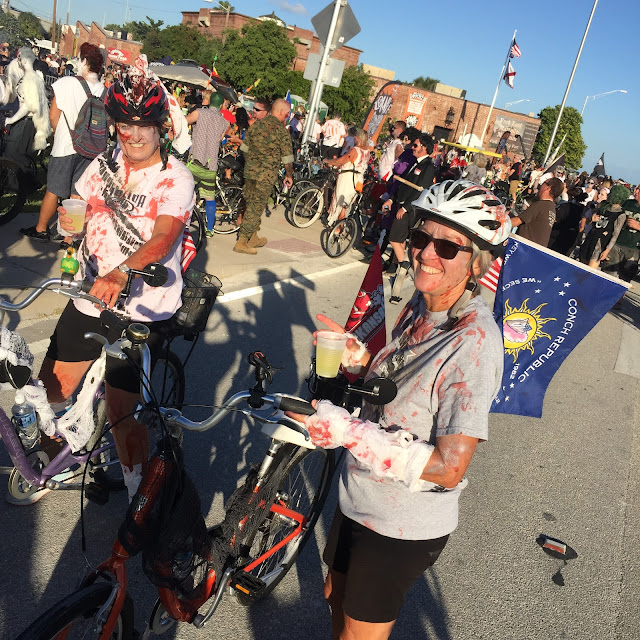 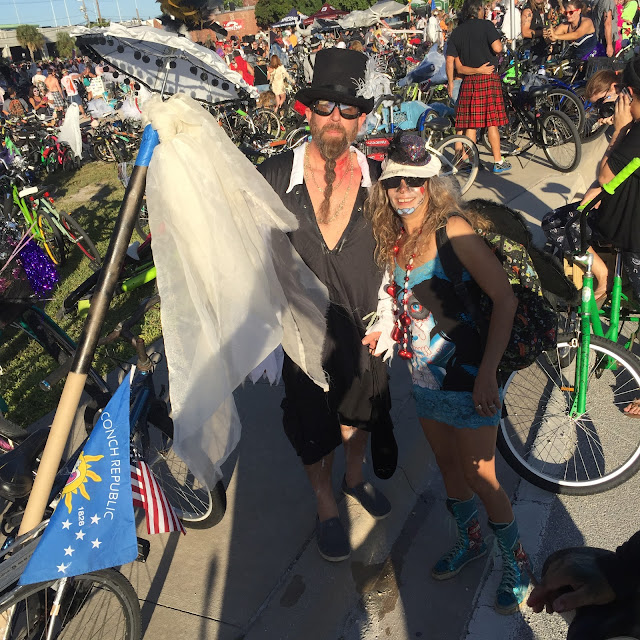 Some Zombies even have the faculties to use their phones.... 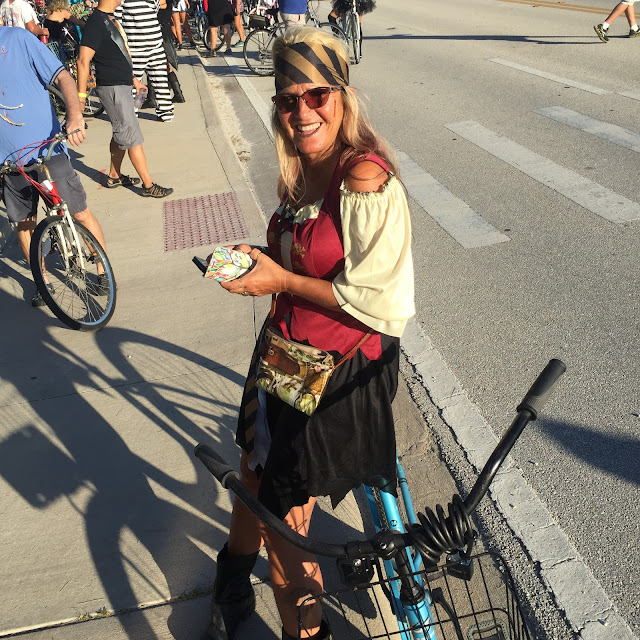 The ride in to town looked glorious, but I had to go to work so I got out while the going was good before the six o'clock start of the ride, which was coincidentally when I had to be ready to work in the dispatch center at the police department. 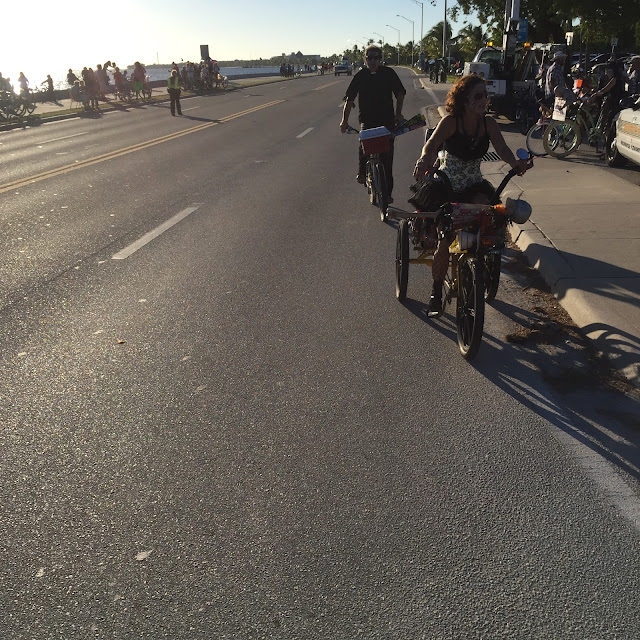 It has become a family spectacle too, everyone hanging out having a sunny picnic and enjoying the coconut palms on the Bridle Path. I really like this picture, small town Key West having innocent fun: 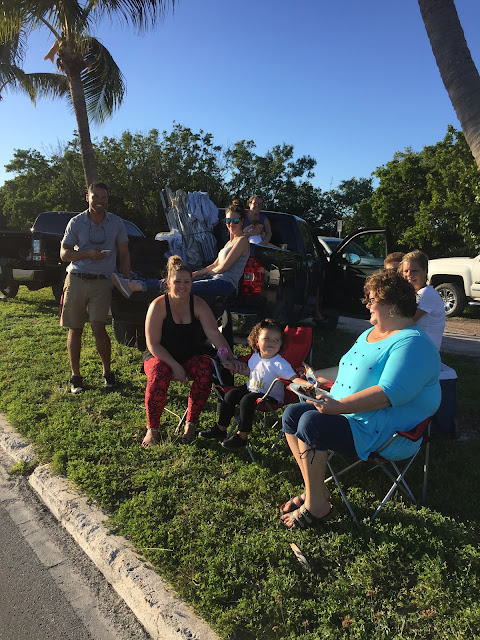 We got a 911 call later in the evening, a report of a cycling Zombie catapulting himself over the seawall into the ocean. My colleague got a breathless 911 call announcing: "We need help! There's a Zombie in the water!" and in the background Nick could hear someone shouting "Man overboard! Man overboard!" I sent an officer and Shannon sent an ambulance and a fire truck as the seawall is quite high above the water and a ladder could be useful. Happily no harm was done and the wet Zombie was safely reunited with his friends on dry land. We got to have a  laugh when we heard the outcome and were grateful to the Zombie Bike Ride for a moment of good cheer on what promised to be a busy and crowded night. I really do like this event.
Posted by Conchscooter at 12:00 AM No comments: